If you could design a city of dreams how do you envision it? A colorful umbrella area could be an idea! I like very much one of the two winning proposals in the fifth annual City of Dreams Pavilion Competition, announced by FIGMENT, the Emerging New York Architects Committee (ENYA) of the American Institute of Architects New York Chapter (AIANY), and the Structural Engineers Association of New York (SEAoNY). 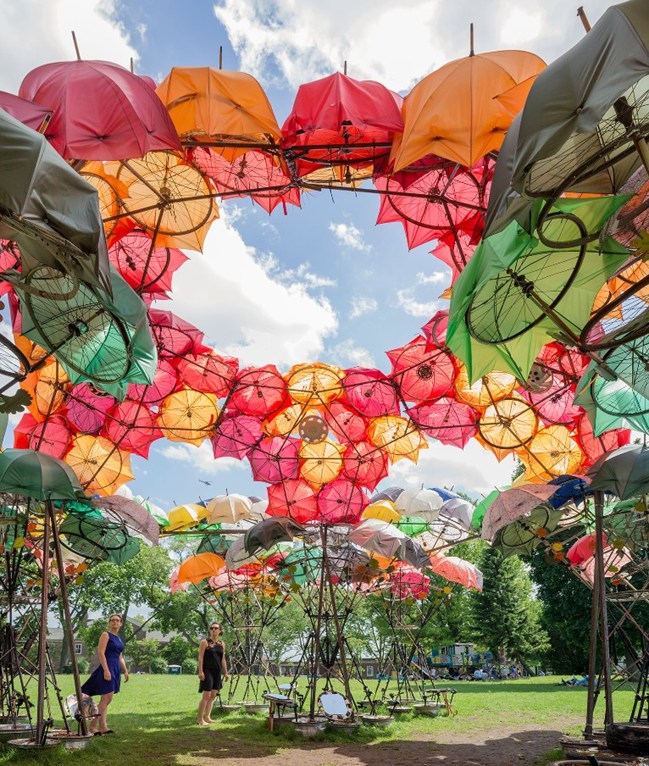 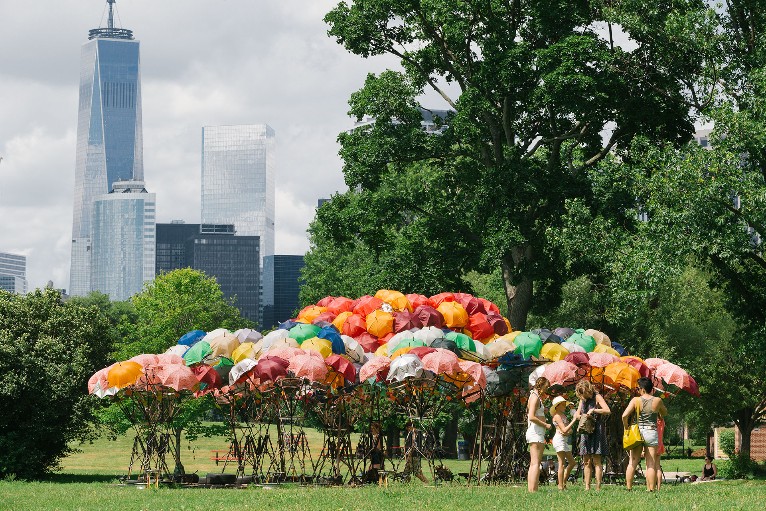 The architect explains the concept behind the project: "Our pavilion states the ‘city of dreams’, the ‘city of tomorrow’ will have learnt further lessons from nature. We have carefully studied natural structures that can grow up and down to adapt context and time circumstances. The morphology of the hydrangea plan has been particularly useful. Mophead flowers are large round flower heads resembling domes. The number of mophead flowers that can be found in a plant depends on the age, orientation, humidity, light or quality of the soil among others. The plant grows keeping a good balance with the environment. Shouldn’t the ‘city of dreams’ do the same? 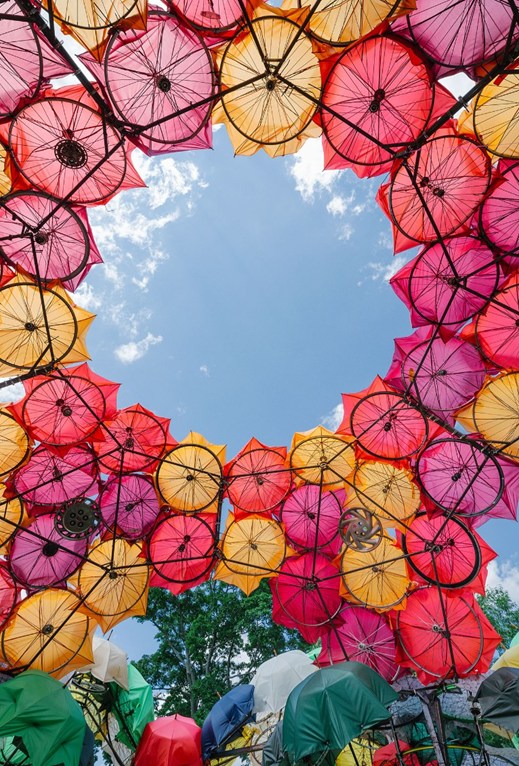 Architecture has to learn to adapt to uncertain budgets, social changing requirements and ecological dynamics. The philosophy of an organic growth: keeping ideas flexible so that can be adapted to real necessities, becomes crucial. This logic also provides a biophilic aspect to our proposal. Learning from nature helps taking care of human wellbeing naturally, beautifully and intuitively". 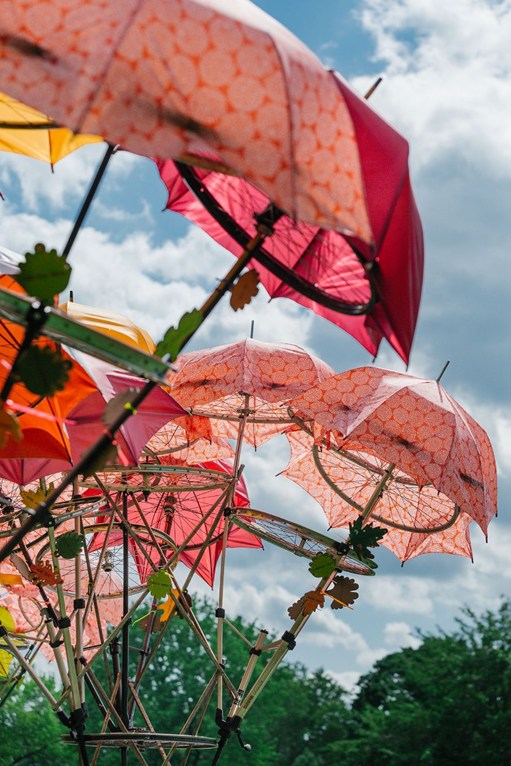 Izaskun Chinchilla Architects’ design takes inspiration from nature to create an innovative and flexible solution that directly engages with local communities and familiar materials. Flower structures such as those found in hydrangeas have the ability to respond to the natural environment, growing and morphing to remain in balance with nature. Izaskun believes architecture must adopt a similar responsiveness, adapting to uncertain budgets, social change and ecological dynamics naturally, beautifully and intuitively.

The proposed design employs commonly found materials, giving them a new life after they have become unfit for their original purpose. The design utilizes broken umbrellas, old stools and damaged bicycle wheels, which several institutions in New York are already recycling. 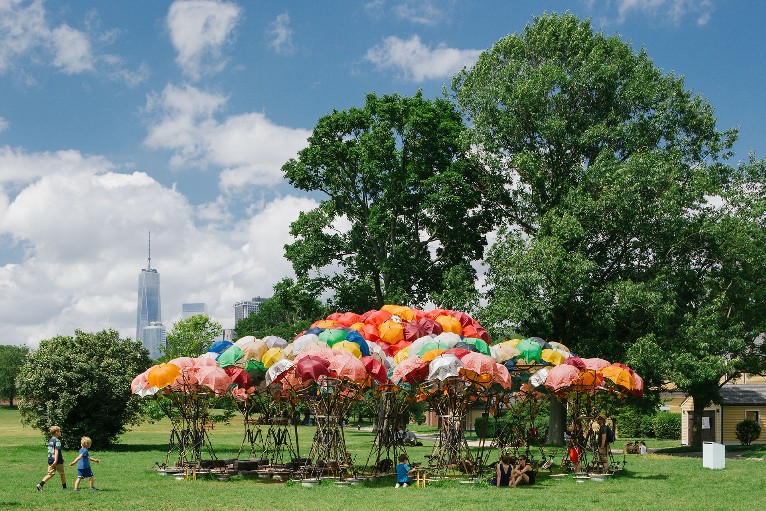 As with mop-head flowers, the pavilion is composed of many smaller elements, all of which can be dismantled and re-used after the summer. Branches composed of several umbrellas and tripods, can be easily reused as sun, wind, and rain protection in outdoor spaces all around the city. Larger elements can be beautiful indoor chandeliers and can be useful for community centers or other public spaces. 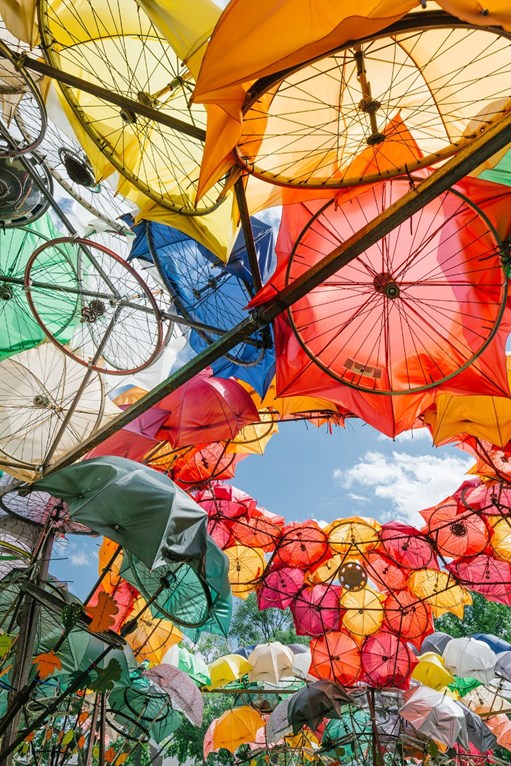