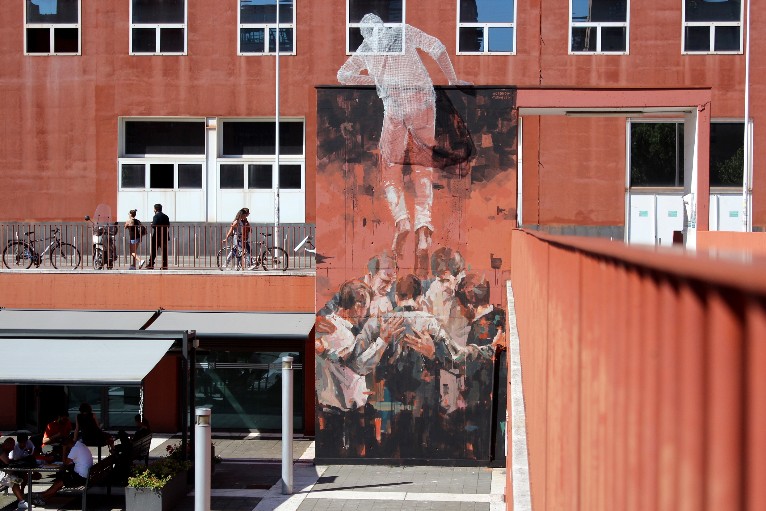 From 30 June till 31 July 2015 Wunderkammern presents Chained, an international contemporary art event that brings together nine of the most important artists on the Urban Art scene today: 2501, Atomo, Borondo, BR1, C215, Max Rippon, Sam3, Sten Lex and Edoardo Tresoldi. The event includes a group exhibition in two separate venues in Milan – an hangar of the Municipality of Milan on Via Amari and the Instituto Cervantes on Via Dante – and the creation of urban art installations in public spaces. 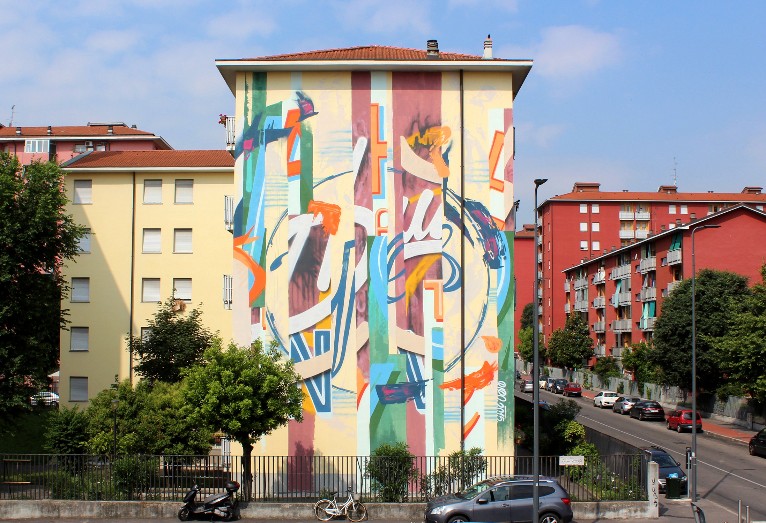 The theme for Expo15 is “Feeding the Planet, Energy for Life”. Starting with the idea of the food chain, an organic ecological system, the artists of Chained investigate the complex dynamics that connect human beings to the nature of which they are a part; a chain of human and artistic experiences that serve to amplify the spectrum of viewpoints on the Expo’s theme, through the lens of art and creativity. 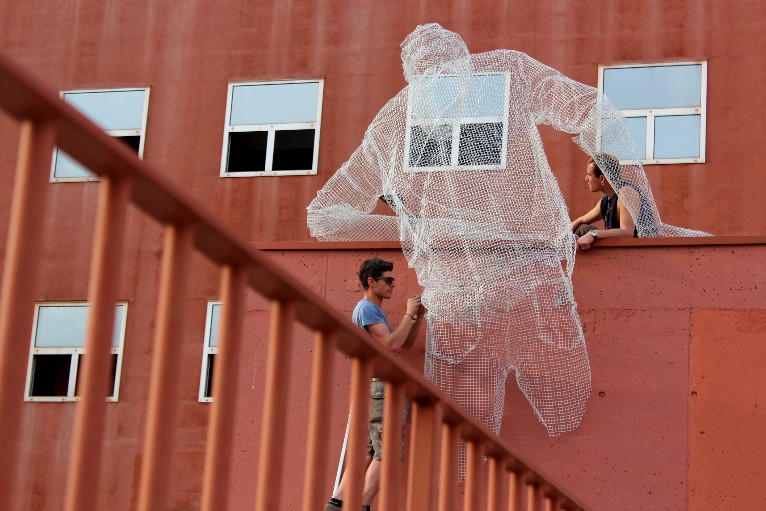 All of these elements work together to support an innovative, pressing dialogue between different artistic expressions and socio-cultural contexts, in the larger context of the city of Milan and Expo15. 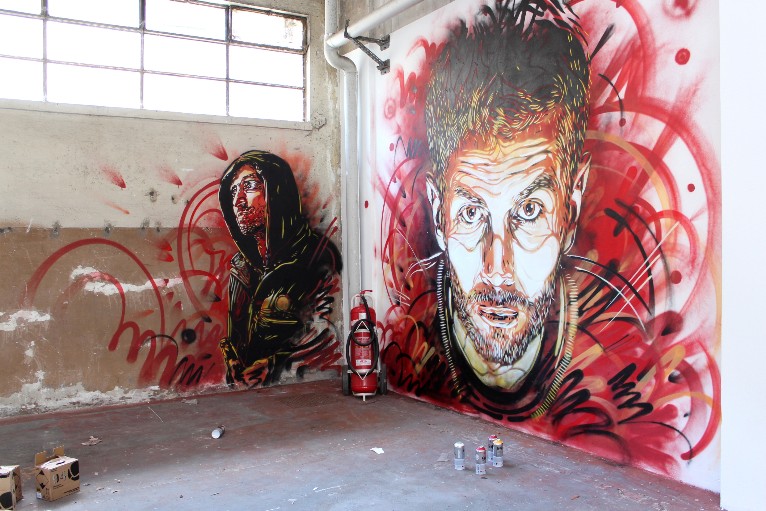 The nine artists will present new works created exclusively for the project. The pieces exhibited in the main location on Via Amari 18 will be created with various techniques and materials, and will include sculptures and installations as well. 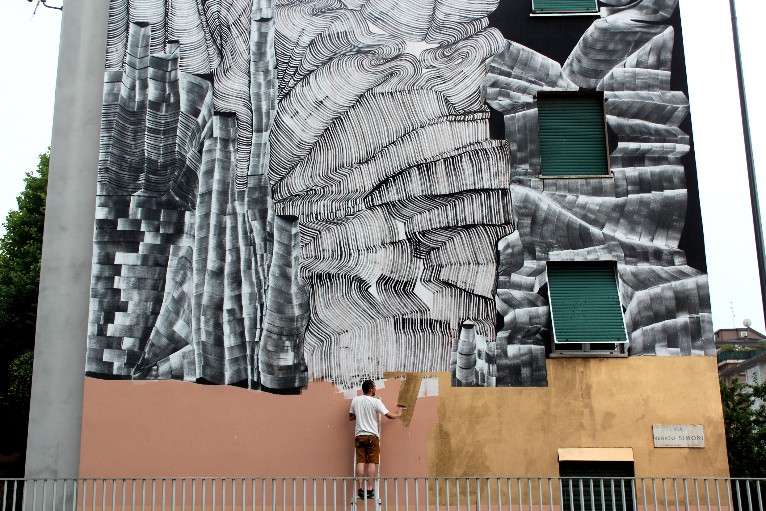 At the Instituto Cervantes in the historical center, the works of the two Spanish artists Borondo and Sam3 will be on display, including a work by Borondo created explicitly for the Institute’s façade and visible from Via Dante. 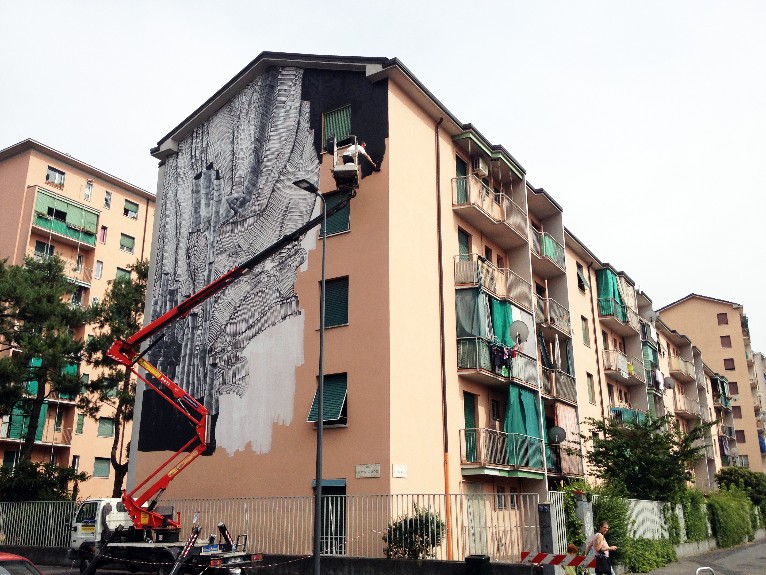 2501 (Jacopo Ceccarelli, Milan, 1981) has never stopped to work on the walls of his city Milan. Influenced by the South American school of graffiti, the artist developed a style that combines murals, canvas paintings, sculptures, installations, photography, videos and documentary. Defining characteristics of his productions are the wavy lines that invade the work surface and the chromatic pairing of black and white, at times embellished by the color gold.

Atomo (Davide Tinelli, Milan, 1965) was one of the first Italian artists to explore the various kinds of writing and street art, beginning his artistic career in 1982. Active on the local socio-political scene, he has promoted numerous cultural and artistic exhibitions, contributing to the spread of street art even in public institutions. In 2007 he co-organized Street Art Sweet Art at the PAC Padiglione d'Arte Contemporanea in Milan. 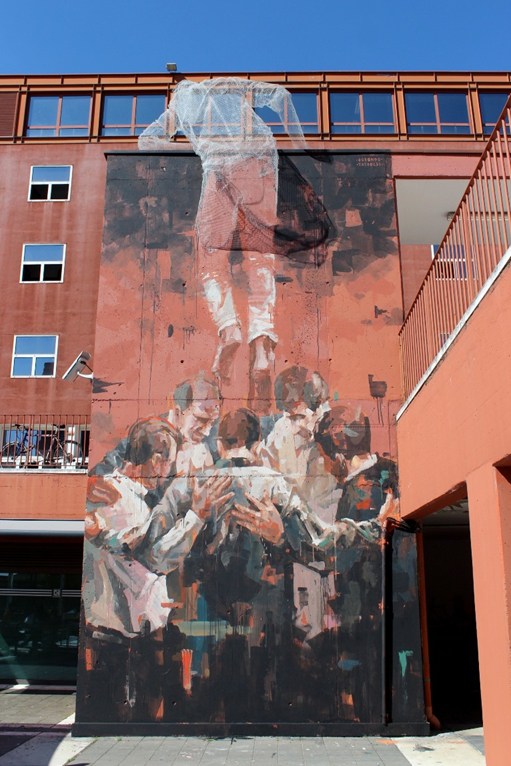 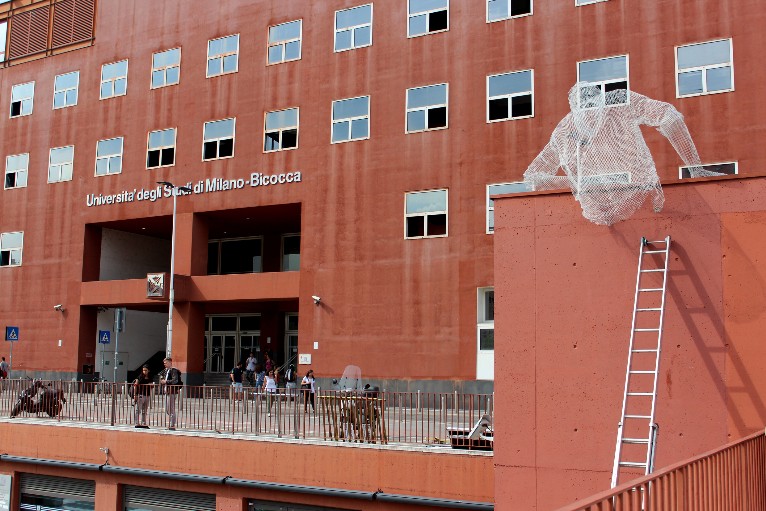 Borondo (Valladolid, Spain, 1989) is most certainly among the most prominent artists on the street art scene today. He began his artistic journey in Madrid with graffiti, coming into his artistic maturity through experimentation with new techniques and languages. The protagonist of his installations is the body, laid bare through a highly evocative, striking pictorial representation.

BR1 (Locri, 1984) lives and works in Turin. His process mainly involves fleeting actions in the urban space, created spontaneously with posters and installations. Evoking Eastern and Middle-Eastern symbols, the artist investigates the contradictions generated by the collision between the capitalist model and the cultures and experiences of people from the Mediterranean area. 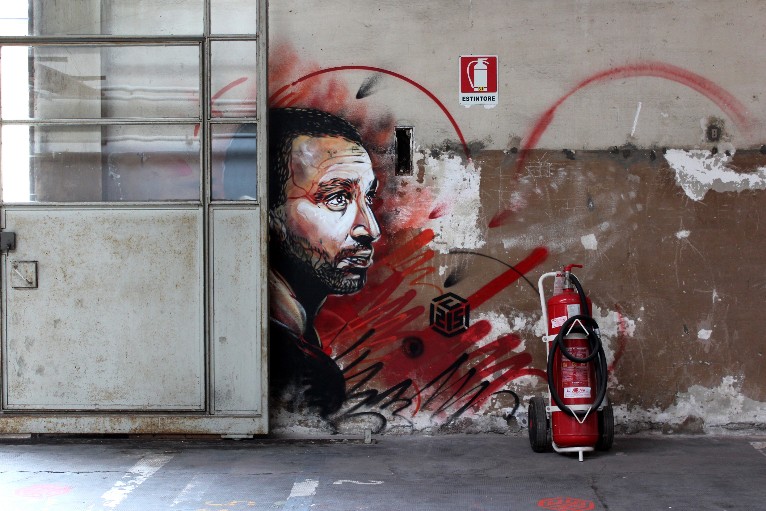 C215 (Christian Guémy, Bondy, France, 1973) is considered a master of the stencil technique. His work is interconnected to the urban and cultural fabric of the place in which it is created. The artist manages to capture the deepest expression of his subjects, casting in his works different artistic elements that orbit around the reading of emotions and the celebration of sensitivity. 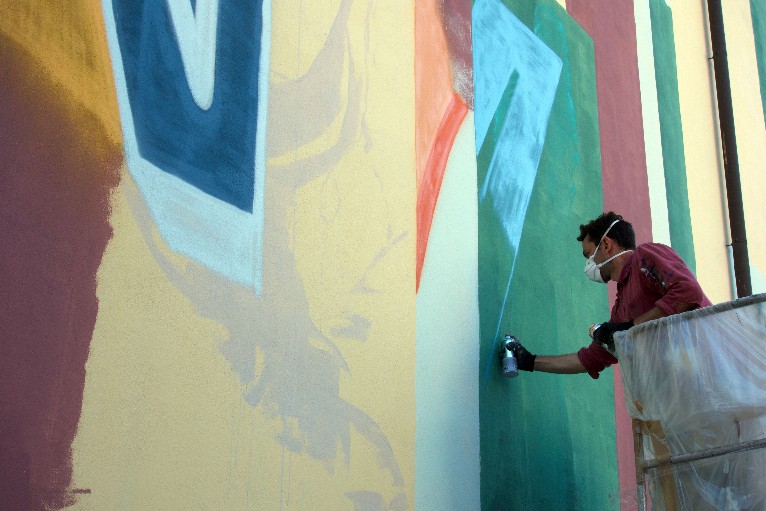 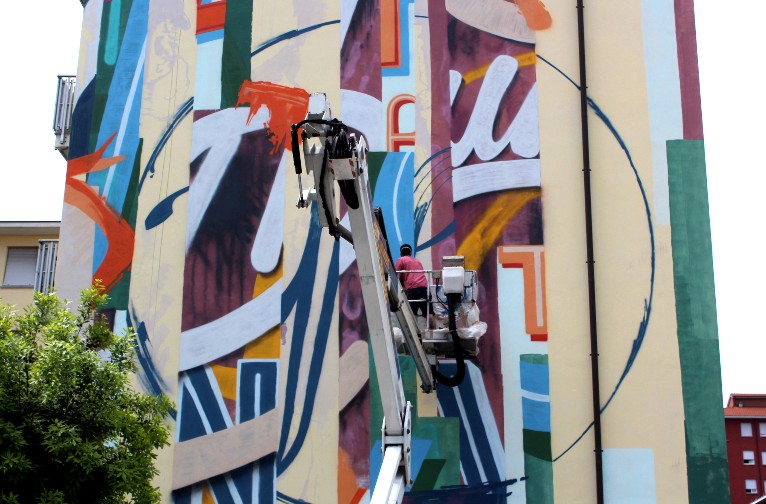 Max Rippon (Ripo) (New York, USA, 1983) lives and works in Barcelona. The artist’s work centers on written communication and progresses through a multidisciplinary set of skills: calligraphy, typography, painting, graffiti, digital production, and sculpture intersect in his work, in addition to the use of diverse materials. The artist focuses on style but also on the message, which is often conveyed through irony and humor.

Sam3 (Elx, Spain, 1980) lives and works between Murcia and Madrid. His public installations – large, black, anthropomorphic silhouettes – can be seen all around the world. The “shadows” of Sam3, as the artist himself calls them, are a reflection on the human condition: hanging in the balance between refined poetry and cutting irony, these figures are characterized by alternative, often provocative and subversive, meanings.

Sten (Rome, 1982) and Lex (Taranto, 1982) are among the pioneers of the stencil technique in Italy. Their work is in constant evolution; starting in 2010 they began utilizing the “Stencil Poster”, a technique that they themselves invented; the artists paste a poster to a surface cutting out parts of the figure as if it were a stencil, and then paint over the matrix left behind, ultimately tearing off the remaining paper to reveal the final image.

Edoardo Tresoldi (Milan, 1987) is an Italian set designer, sculptor and artist. He is especially known for his meshed metal installations, which take shape as site-specific transparent sculptures that are perfectly integrated in the surroundings. The artist starts with the dynamics of the space, then develops a story or a character and concretizes them through the creation of the sculpture. 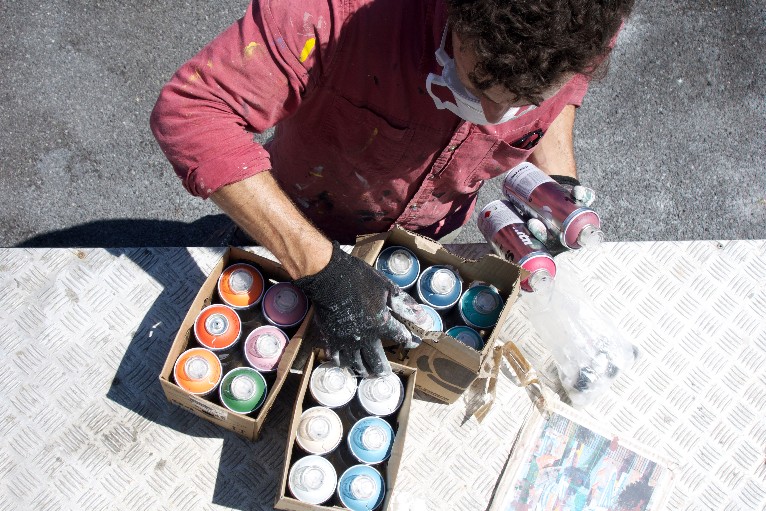 To find out more: www.wunderkammern.net/