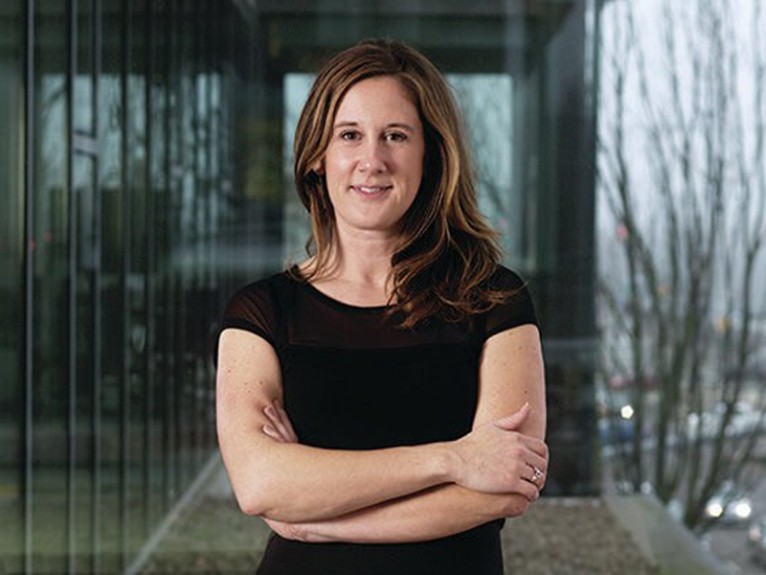 Carrie Strickland has always known she'd own her own firm one day. She founded Works Partnership Architecture ten years ago along with her partner WILLIAM NEBURKA for two simple reasons: 1) She wanted the freedom to express her ideology that great design doesn't necessarily require great budgets and 2) she wanted to make her own decisions. In these past ten years, Carrie has racked up quite a resumè: she's served as visiting professor at Portland State University and the University of Oregon, serves on forums and lecture panels discussing design in the Pacific Northwest, has served on the board of directors for the AIA Portland chapter, was chair of Portland’s Development Review Advisory Committee, and is a co-founder of Cityscope, a non-profit platform which focuses on multi-discipline urban fabric and design...and yet she still has to deal with comments from male colleagues like "wow this is great, can the little lady draw, too”?

Apparently, that glass ceiling everyone talks about is laminated. Women in the Architecture field still have to deal with sexist comments, wage disparity, and with the allocation of less complex work—in some firms, women are given more secretarial work, while the men take more of a hands-on role in the creative process. So what has to be done to erase this inequality? How can women who have all—if not more—of the qualifications necessary to strive in the field navigate the current social circumstances? We asked Carrie to share her thoughts.

According to the American Institute of Architects, about 17% of registered architects in the US are women. What, do you think, are the contributing factors in the industry which lead to such a low percentage?

When you look at the number of women entering architecture school or even those in the first few years of their careers, the numbers are closer to 50/50. It’s a bit of a mystery, but I do think the number of women in the field drop off later on. One factor is that women tend to take time off during child rearing years and then find it difficult to come back in the profession after a long break. The field is changing very quickly right now, with shifts in technology and it can seem pretty overwhelming, like rejoining at high traffic speeds. I came up through school and my early career with a family in tow—it has always been a challenge and as a profession we could be more supportive.

Regarding architectural licensure itself, I think there’s actually been a shift away from licensure across the boards—not just amongst women. It is in fact a long process, it’s expensive and really— unless you are working on your own, there isn’t a tangible need to pursue it. At some larger offices, it’s a milestone held out for promotions or titles, but in a small design office – it’s more about the actual work. For instance, we haven’t ever hired someone over someone else because they were licensed. We feel more strongly about who someone is and what drives them than their credentials.

You are the co‐founder of the very successful firm, Works Partnership Architecture. What made you decide to start your own firm? What are the benefits of working for your own establishment?

To be honest, I always felt that I would end up having my own firm. It was something that I held onto even after I began to see that it would be very difficult. Knowing what I do now, after 10 years of practice – I’m not sure I’d have the guts to do it again. One of the main reasons I wanted to start an office was that I wanted to create a place that could focus on the things I truly believed in. I always believed that great design could exist without great budgets. I always believed that clients could also be friends and that employees could feel more engaged if everyone knew all the details of what was going on in the practice. The best thing about having my own firm is that we (my partner Bill Neburka and I) get to decide what we take on, who we work with, etc. The little rewards are well worth the struggle – but you also have to see victories and rewards in things that most people don’t even think about.

Would you say that women in architecture are still subject to discrimination? If so, in what forms is such discrimination manifested?

As a gut response, I’d say yes. I think there are still pay discrepancies, I think there are still role discrepancies and I think that interactions with clients or more obviously, contractors are subject to latent discrimination. Men are considered strong leaders, women are considered something else…. if they act in the same aggressive or willful ways. Women tend to be great managers and they will often get stuck in those roles while the men are trusted with the creative work. This, of course, is a great generalization –there are plenty of examples of these roles being reversed. I think that architecture is unique to other fields of business, some of which also suffer from some latent discrimination. But architects move between some very different groups – institutional client groups, developers, contractors, etc. Each of those groups have different perspectives. I still struggle with gaining the respect of some of the contractors I encounter on a jobsite. The most common challenge I face is showing up on a jobsite and either being assumed to be the assistance or the interior designer. In one project meeting early in my career, I had just finished presenting a set of residential unit plans to the client group and the client turned to my supervisor and said “wow, this is great – can the little lady draw, too”? I’m sure every woman has a story or two like this. I don’t shy away from the fact that I’m a woman -­ I’ve developed a technique that I feel can right-side uneven ground. My personality is sweet but if you cross me, you’re in trouble. One client has referred to me as a kitten that turns out to be a tiger. It’s a bit of a surprise attack.

What changes must be implemented for the percentage of women in architecture to increase?

I think we need to stay the course. I think more women need to find the guts to step out and lead. I think we need to test ways of being strong without being overpowering. I read recently that women leaders should practice being the alpha butterfly instead of the alpha dog. I’m still trying to figure that one out, but there’s promise. I think that the women in the field today need to do a better job of broadcasting what they are doing.

What advice would you give to young female architecture students looking to make it big in the field?

We need more role models. I was asked recently about women role models throughout my career and I came up empty. All my role models were men until now. Now I’m finding relationships and examples – Jeanne Gang and Billie Tsein have 100% of my respect and they're making it easier for young women to follow in their footsteps. I had a wonderful mentor in my late 20s. He was an older gentleman that I was working for. He took the time to get to know me and really helped me understand how my strengths could translate into success in architecture. I think it’s important to know yourself and know what you want to get out of any situation.

How do you define success?

I think success can be found in the smallest victories and it’s important to allow yourself to see those things. Some recent examples for me, personally, would be presenting to the design commission and getting approval on the first time through, or striking common ground with a new client, or seeing someone in the office really be as excited as I am something as mundane as building code interpretation. In my office we have a “fuck yeah” stamp program that we’ve implemented. It’s little stamp that you get when you’ve done something successfully-it can be as small as handling a tough conversation with a client, getting a permit through the city quickly, catching a mistake before it’s too late, or just managing to make it through a particularly tough day. For us, it’s a way to focus people to recognize that success comes on all scales and you need to remain vigilant… don’t become complacent. And… at the end of the year, all your “fuck yeah”s add up and you get a prize!