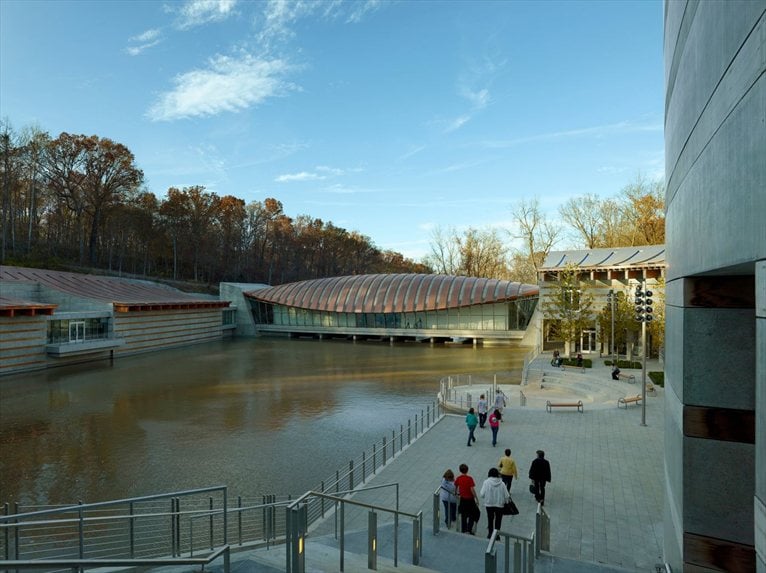 Crystal Bridge Museum of American Art, officially opened last winter and designed by Moshe Safdie's office of architecture, is a great museum in the heart of the United States. The Israeli-born naturalised Canadian architect has created the project for a super-museum for its wealthy patron Alice Walton, heiress of the fortunes of one of the biggest chain stores in America.

Until a few years ago, before the boom of the much loved yet also hated “new economy” revolutionised established commercial balances, the owner of the Walmart chains contended the throne of the richest person in America with some Texan oil tycoons, who were, at the time, also the richest in the world (the family still occupy four of the top 20 places in Forbes' World's Billionaires list though!).

What happens then if one of the daughters of Wal-Mart's founder, Sam Walton, decides that the time has come to give her art collection a home worthy of it? What happens is that, in the wake of the chain stores launched by her father, she creates a super-museum. The Crystal Bridges Museum of American Art, officially opened in Bentonville, in Arkansas, which is still the headquarters of Wal-Mart Stores, Inc. and where the family mansion stands.

The museum was built at the summit of a hill that is crossed by panoramic paths which wind their way through the lush vegetation of oak and pine trees. Visitors move through the complex from one pavilion to another, crossing the the ponds with views on all sides. The crown of pine trees on the top of the hill surrounding the museum can clearly be seen above the museum roofline wherever you look.

The museum consists of eight pavilions, three of them lead onto the ponds while retaining the hillside. Indeed the ponds provide the fulcrum around which all of the structures are grouped. Moving through the museum complex, the visitor passes from inwardly focused spaces, serving as galleries and classrooms to other sectors where there are dramatic openings to and views of the surrounding landscape.