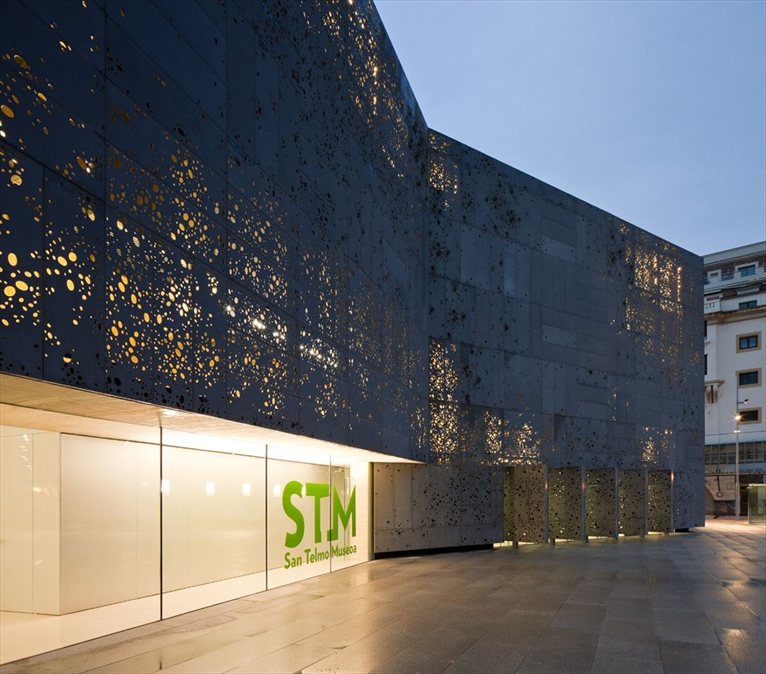 The San Telmo Museum in San Sebastián, the oldest museum in the Basque Country is the result of a long process of modifications taking place over time which ended last year with the work carried out by Nieto Sobejano Arquitectos.

The proposal focuses on recovering the original building and on building a new wing which has created space for new functions.

Great importance has been focussed on the expansion and on its perforated metal skin, on plaza Zuloaga, created by the artists Agustina Otero and Leopoldo Ferrán. The visual impact of the new building has been kept down to a minimum thanks to the creation of this 'green' wall which covers the building and is inspired by the rocks of Monte Urgull. Nieto Sobejano Arquitectos wanted the vegetation to come out of the perforated metal sheet and in time to take over.

As an expression of the natural/artificial relationship which pervades throughout our proposal, the new building-screen is cloaked in a perforated metal mesh which provides support for moss, lichens and other climbing plants which can even cover the whole building in time. In this way the new building, 'by dissolving' into the landscape of Monte Urgull, will enhance the historical buildings.

The new wing of the San Telmo Museum will change its appearance with the passing of the seasons: at several times it will disappear, blending in with the vegetation of the hill and will reappear at other times showing a long bare wall: an unexpected metaphor -perhaps - of the difficult relationship between architecture and passing time.