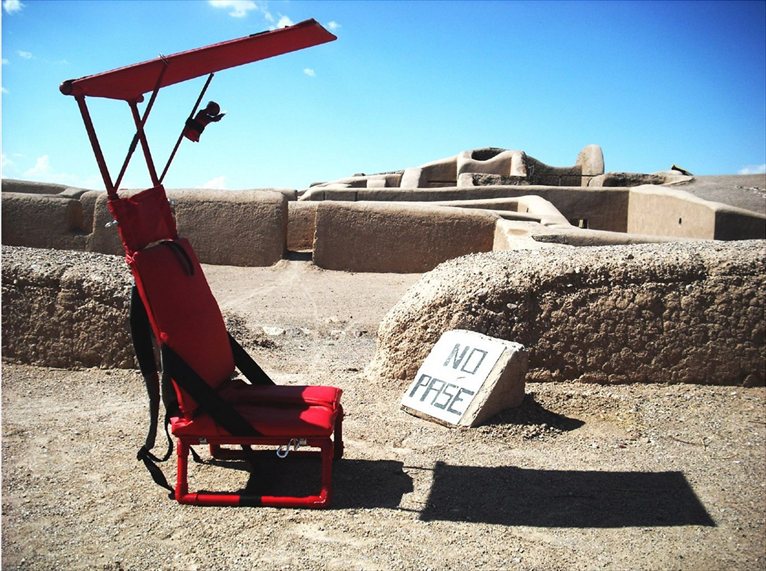 PKMN architectures and the Mexican Instituto Superior de Arquitectura y Diseño have set up a workshop called ROJO PAQUIMÉ to experiment with the colour red on a historical landscape. The area of Paquimé or Casas Grande as it is now called, is a Pre-Colombian archaeological zone about 150 miles from the state capital Chihuahua.

This area began to be inhabited by the indigenous population in around 1130 and was abruptly abandoned in the early 1400's. After the Spanish conquest many archaeological finds like axes and the earthenware pottery synonymous of Paquimé were taken away.

However, the true extent of the pre-Columbian civilisation was not discovered until significant archaeological investigation was later carried out. These digs are still on-going. They have yielded numerous artefacts from pots and jars to beads and other hand-crafted objects.

The Paquimé pottery from the old period provided the inspiration for this project by PKMN architecture. Indeed it was domestically produced and painted red using different textures and materials for its decoration.

The workshop uses recycled domestic materials like fruit boxes, old curtain rails and old bicycle parts to create a temporary installation at the entrance to this World Heritage Site.

The work is on two scales: it is both a huge sign (3 metres tall and 24 metres long) indicating the entrance to the archaeological site and individual letters spelling out the name of the ancient civilisation, which can be moved around and placed wherever needed.

Indeed the P can be transformed into stilts to be used as mobile viewpoints, A becomes a sort of cart for transporting elderly or disabled people, Q becomes an artificial tree creating shade when the temperature gets too hot, U provides two observation towers for a better view over the site, I creates a backpack with a portable shadow, M is a “universal Do It Yourself system for urban fitment construction” (I would be grateful if someone could tell me what this means!) while the final E is a portable museum with information on the archaeological site.

This collaboration between the group of young Spanish architects whose name says it all (PKMN or Pac Man) and students of the Mexican school of specialisation in Architecture and Design architecture (ISAD) provides a combination of everything this innovative architectural office is trying to achieve “exploring new architectural fields, connecting citizens, identity, pedagogy, communication, game, action and cities”.