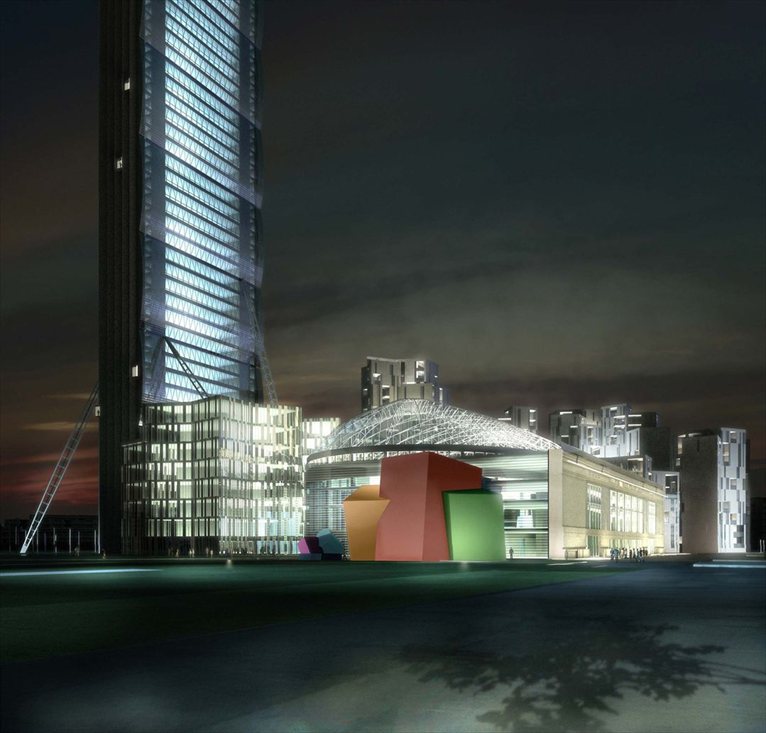 The foundation plate has been laid of the CityLife tower designed by Arata Isozaki and Andrea Maffei within the re-qualification of the historic district of Fiera di Milano, commissioned by the company Citylife, which sees Zaha Hadid, Daniel Libeskind and Pier Paolo Maggiora amongst the protagonists.

42 hours of work from Friday 30 March and Sunday 1 April for a total of 4,260 cubic metres of concrete: the foundation plate of the tower has an external area of 63 x 27 metres and 62 deep reinforced concrete foundation piles, made in the last few weeks for a length exceeding 30 metres with 1200 tons of steel reinforcement.

The worksite of Arata Isozaki and Andrea Maffei 's skyscraper is the first commissioned work to have been started and by 2015 it will reach 207 metres high, becoming the tallest tower in Italy with 50 floors of offices.

The building shall be made up of a vertical sequence of slightly convex modules, repeatable ad infinitum, recalling Romanian sculptor Constantin Brâncuşi's 1938 sculpture “the column of the infinite” or Endless column: four inclined struts will support the two main fronts, while the lateral ones let you see the movement of the panoramic lifts which give the structure a futuristic look.

The project has the environmental compatibility requirements according to the international standards and has already obtained Leed Gold pre-certification.

The CityLife project will be characterised by an articulated mixture of public and private planning functions with the result of an active district both day and night, with new places and itineraries to live, work, experience culture and free time, capable of creating new values of urban life, as well as a new nervous system competitive with other European realities.