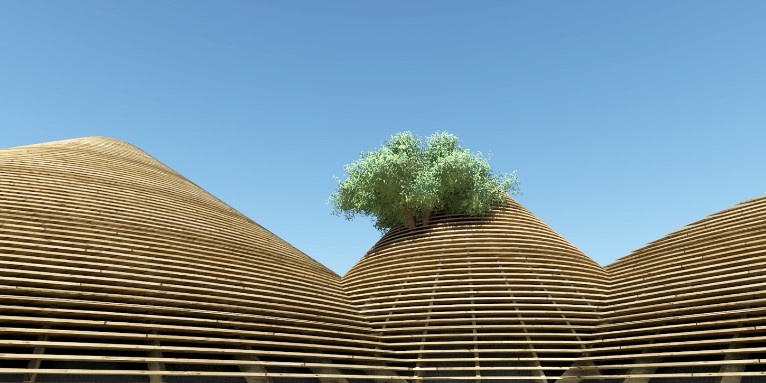 The crust is a strange thing: normally it forms by itself through gradual transformation the matter's surface, thus becoming the shape.

A crust of dirt will form moment by moment, layer by layer, leaving its mark in the subsequent seams of sedimentation. It does not form in one fell swoop as in Pompeii where the lava became a crust that erased everything for centuries and centuries. 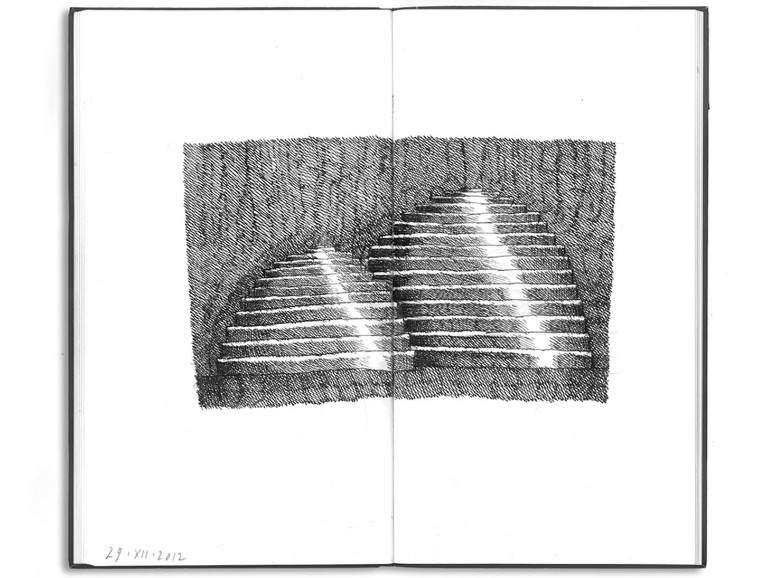 This crust of lava lets us think of how important and delicate the crust on which we walk is, as it protects us from the red hot core on which our planet rotates.

We have dedicated our progress to go to the moon to explore the universe, but we know little of what we have under our feet. It is a mystery so close , a few hundred metres below us and is just as great as what we see a billion light years away above our heads.

The crust is our landscape, our sphere of life, the goal of all possible safeguards that is tender and delicate. The crust of the hills, the mountains, the plains covered in moss,  that which produces forests and vegetation, grass and trees, colors, and fragrant fresh air

When it's there we realize what it’s worth and how much we need it.

Fortunately, nature is stronger than men and we can only hope that it will take over at the end and decide what is right and what is wrong, who is to survive and what will die - unless of course it is the whole human race.

The crust is our environment, our landscape and our stage where we play out our favorite roles.

It deserves to be in the most important museum of the earth, however it does not yet exist and will never exist because there can never be a museum so important, and in any case, I hope that it will never become a museum, but rather, that is remains beautiful and available to everyone.

Pavilion 0 is the first to greet Expo visitors arriving from its North entrances, which are the farthest from central Milan but served by the MM Subway and the State Railways. Appointed to introduce the theme “Feeding the Planet – Energy for Life”, Pavilion 0 illustrates the richness of that multifarious title, explored by nations from all over the world in their exhibition spaces. 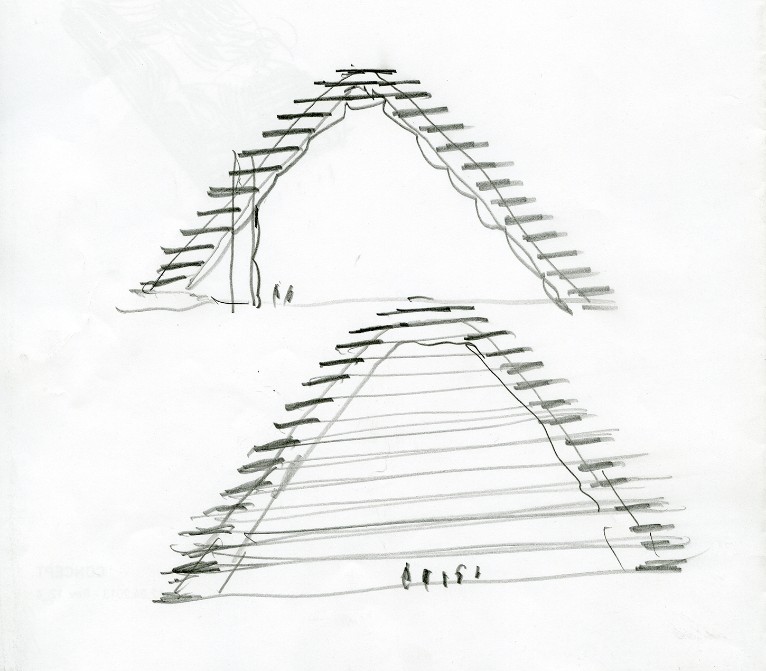 Thus, it is an emblematic pavilion, expressing through its form and its visual impact all the expectations of this renowned event. Its role is therefore not purely didactic, but primarily representative. Conceived as a large slice of the earth’s crust, it is neatly cut and lifted to invite visitors to discover the deepest secrets of our planet. The planet is presented as a sectioned mountainous area, and inside the pavilion, visitors will discover a valley set among gently sloping hills. 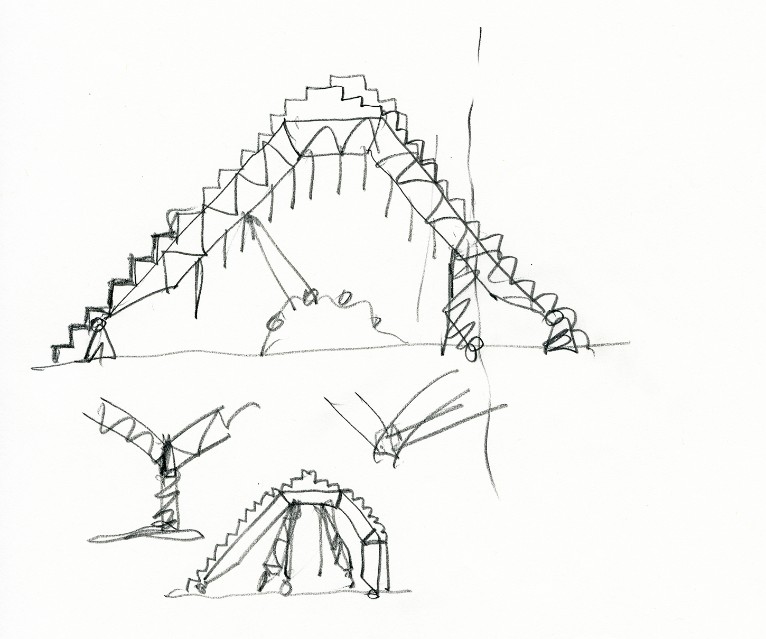 The pavilion has a rectangular floor plan, with an entrance located on one of its short sides and the exit located on the opposite side. It occupies an area of about 7000 sqm.

The slopes are treated with contours which reproduce the physical texture of  hills. Thus, the whole roof is formed by tiers that transform the mountains into gigantic flights of steps, which allow for a rediscovery of the beauty of the curves that used to make up the land. They are made up of differing layers, illustrating a world made of layers, like a lasagne. It is almost magical to see a mountain taking shape layer by very thin layer; and to observe how the bizarre form of an isobar is explained by the one beneath it and the one above it. The mountains are seen from below, so that the eye is inevitably lifted towards their summit, making us feel very small in a vast world. 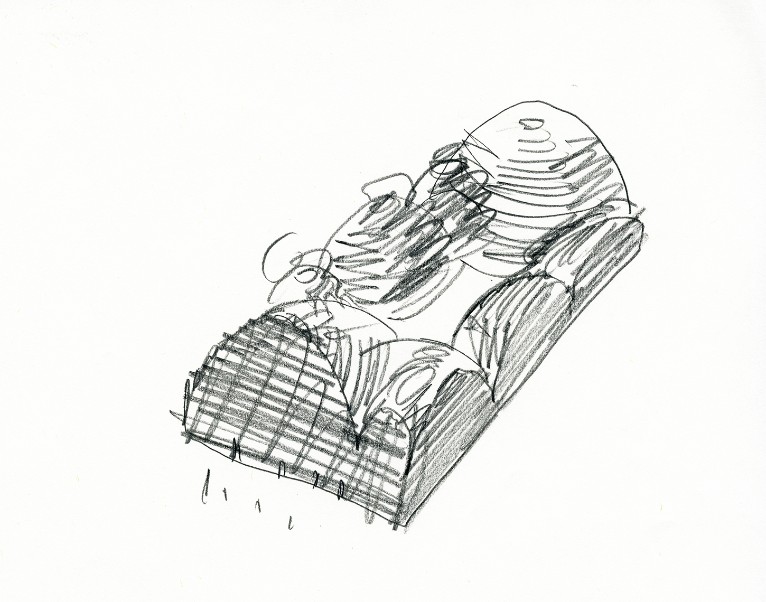 The whole pavilion is built in wood, with a mono-textural effect. Wood is the planet’s living matter, the one that best conveys the fragility of nature to contemporary mankind. 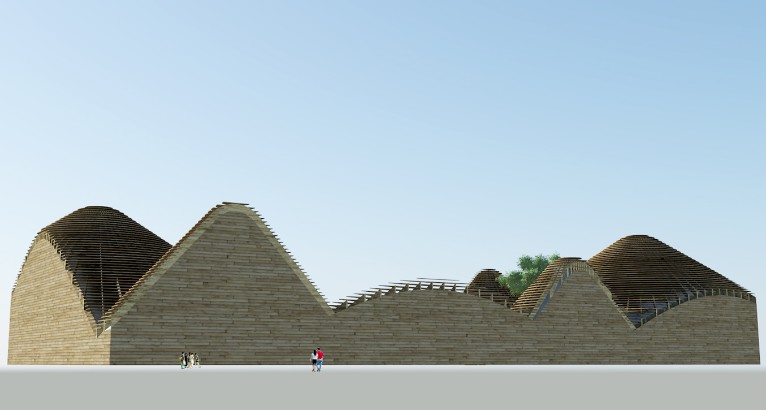