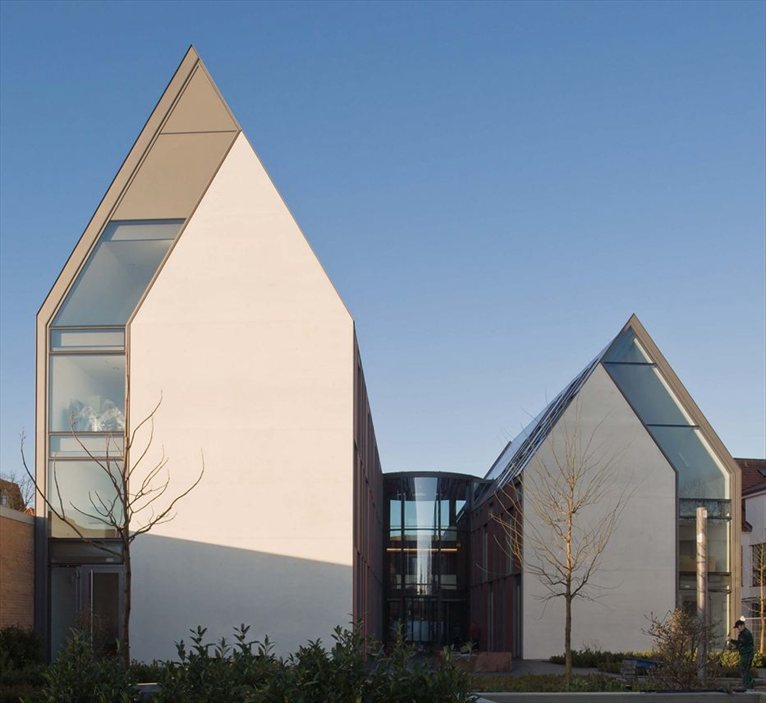 Stephan Braunfels’ Berlin architecture office has designed the New Volksbank building, one of the most important German banks in the pedestrian centre of the town of Gifhorn, near Hannover. The basis of the project is analysing the historical growth of the buildings in the city, the uninterrupted profile of the roofs and the narrow alleys formed between them.

Over the last two centuries much of this architecture called 'Ackerbürgerhäuser' or smallholders' houses, has been knocked down and replaced by other more modern style buildings. The new building for the Volksbank in Gifhorn recovers tradition but the minimalist architectural language radically reduces the historical form of the building to its basic elements.

The whole construction is divided into two independent buildings which join together to form an acute angle. Between them there is a narrow patio closed by a glass circus, the “market square” of the Volksbank, a linchpin space between the buildings, the public space and the private one of the garden in the lane.

The closing and opening arrangement gives the façades a sense of fills and voids which enhances the geometrical elegance of the building and opens up interesting viewpoints on the city and the landscape. The shape of the tympanums, with the large windows for natural lighting, give the environments their particular quality.

The intelligent arrangement of the opening façades, staircases and walkways provides an extremely flexible distribution of the spaces. The counters open to the public are directly connected to the square in front, whereas the corporate offices are more private and accessed by a special staircase but are still well lit.

The project has taken all necessary precautions to limit energy consumption of the building as far as possible, from its arrangement to the screening of the openings, from exploitation of the convection movements inside to the prevalent use of renewable energy sources.

This project provides a reflection on the possibility of designing original buildings which reinterpret a strong tradition incorporating the important matter of energy efficiency and proposing a high quality service at acceptable market prices.