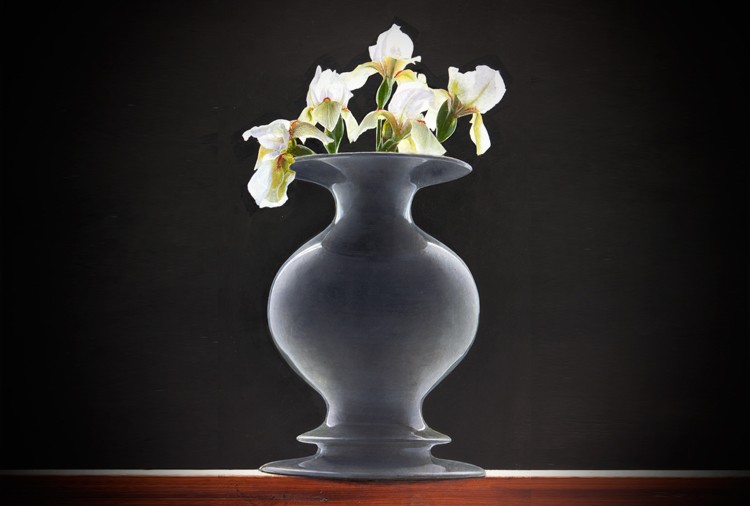 This is the story of the very first product that was the inspiration for the creation of the company that is nowadays known as Produzione Privata. This is the story of our Vaso Bianco ('White Vase') that spelled the beginning of a long journey of experimentation of design and a constant dialogue with italian artisans to create the unique artworks of Produzione Privata.

It all started with Michele De Lucchi’s passion for ceramics which was born during his time in the Memphis group. For those not familiar with Memphis, it was a radical design movement of a group of artists and designers that emerged in the 80s and was at the forefront of the postmodernist era. 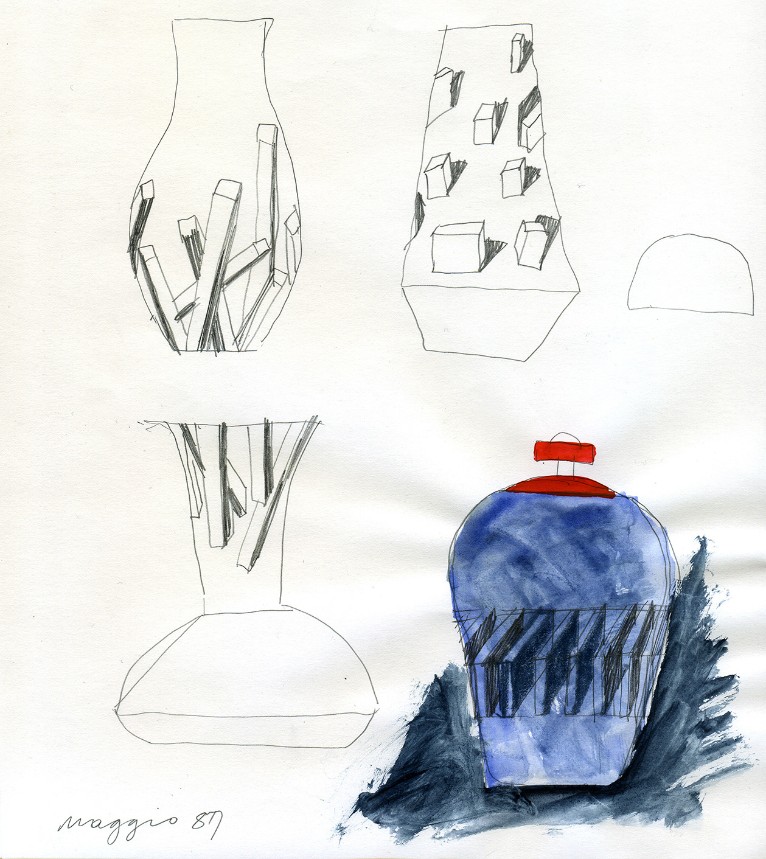 Since 1987, De Lucchi started drawing white objects with black decorations. This was part of his Memphis study to explore the contrast you could achieve with this dichotomy of colours. The decorations in time transformed into an in depth study of patterns of diametrically opposed shapes and colours. This study translated into adaptations for items which had various purposes: from fashion dress collections, to jewelry, to paper decoration and most notably, ceramic vases.

De Lucchi began to draw vases towards the end of the Memphis period. He was very upset and had lost an important channel to transform his inspirations into reality when his master Ettore Sottsass decided to shut down the Memphis Group. As a result he found himself abandoned, with plenty of corporate work, but without the means to express his creativity and experimentation without commercial limitations. So. Without any client demands, order assignments or even potential buyers, he stubbornly decided to follow his passion for a special material: ceramic. And he started to build vases for himself instead.

This is Vaso Bianco. The vase that ended his mourning and creative ties with memphis and began the inner journey of creativity that allowed Michele De Lucchi to find himself into the designer we all know today. 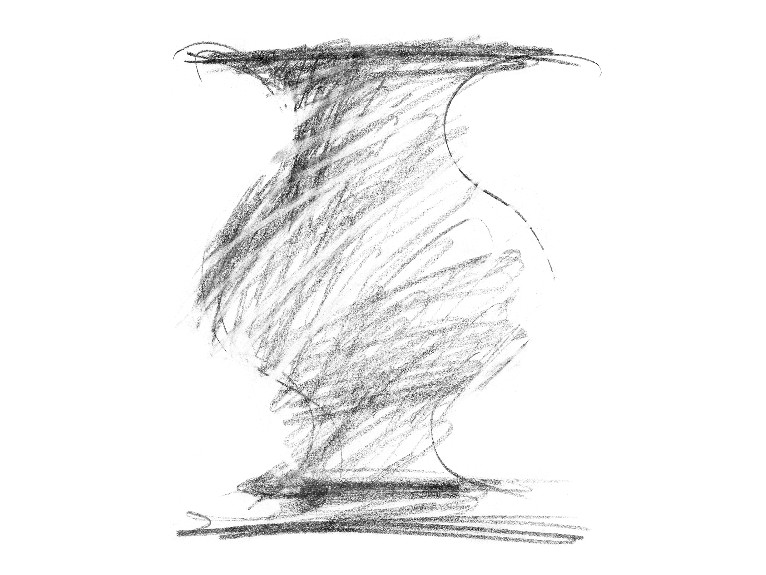 This vase represents the beginning of a new design era for De Lucchi beyond Memphis. This new beginning is best illustrated by inadvertedly abandoning all the critical features of what defines a Memphis product. A Memphis product is has provocative & edgy shapes, it contains bright striking colours and a displays careful succession of repeting patterns. The Vaso Bianco is completely is completely white, it consists of only curves and yet it still reminds you of the geniality of Memphis without any of its characteristics. In De Lucchi's words this vase 'abandoned the technique of decorum and begins a reflection on shapes, on matter and its specificity'. 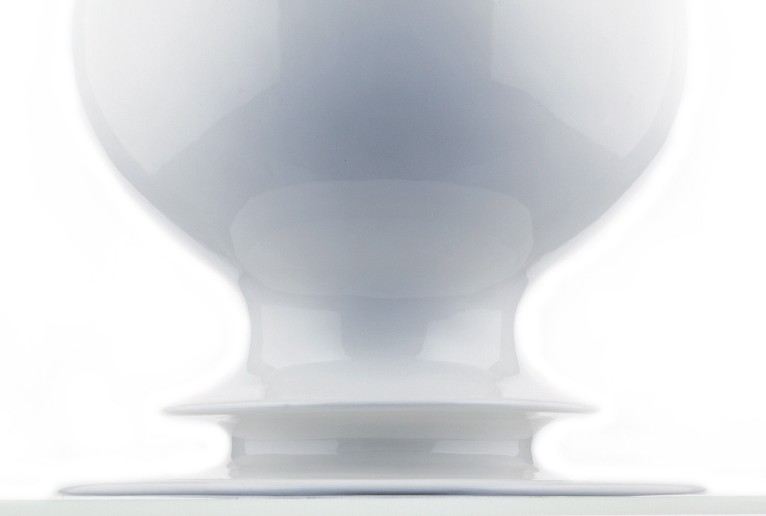 Memphis was closed because it was not keeping ahead of its time with experimentation because it became too popular with the masses. Produzione Privata on the other hand, as the name implies - 'Private Production'- , went back to the roots. It was Michele De Lucchi's perfect cover to repudiate commercial success, conformity to the masses' demands and the traps of large scale productions, to become a lonely artisan. Why an artisan? Because it allowed him to experiment without any creative limitation.

«Even today I would still make the ceramic vases white and I cannot think of doing anything different. It is a colour, it is not just white, it is a specific and magnificent material and it can vary so much from clay to clay, from baking to backing» Michele De Lucchi 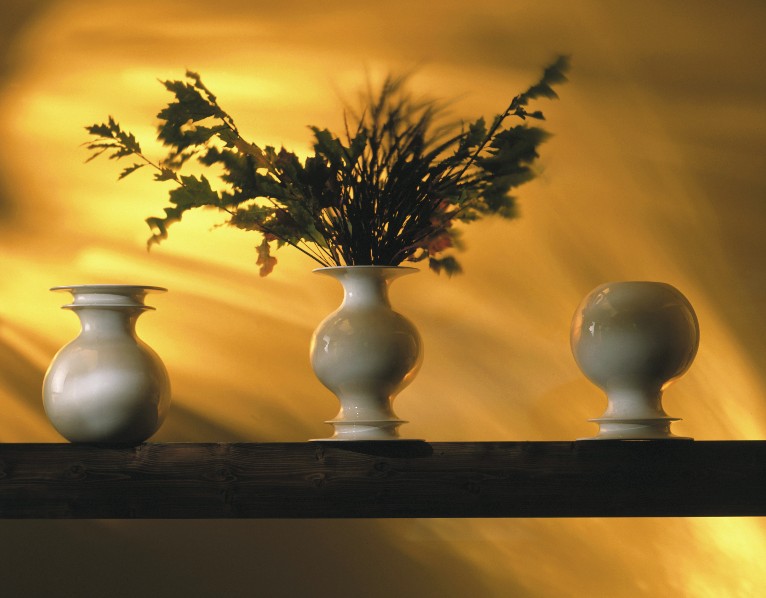 This was the beginning of Produzione Privata. This is the founding product that upholds the noble quest of experimentation, ground breaking, hectic disruption of Memphis while adding the calm, down to earth inner journey of hands on discovery of craftmanship. 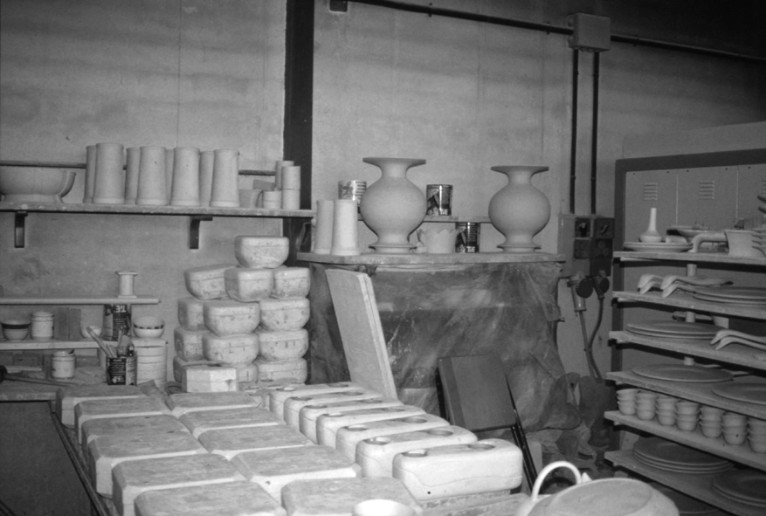 From this study of ceramics, shapes and the collaboration with artisans, Produzione Privata the company was born. Its philosophy is maintained to this day by De Lucchi’s credo of: ‘Cultivating experimentation and encouraging craftsmanship’ . 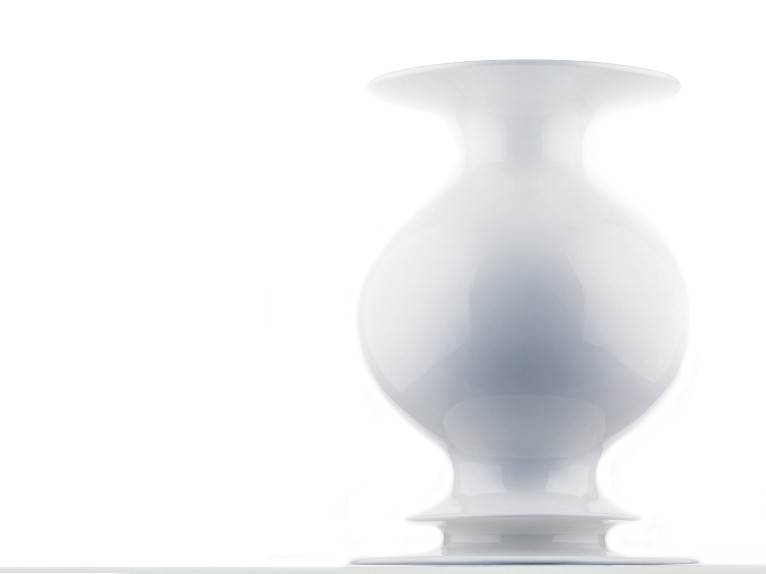 The imposing character of white vases represented a real challenge for small artisanal manufacturers because of the difficulty of handling and cooking such large objects. But once you stimulate and challenge a craftsmen conviction, passion and desire to express their manual skills and 'know-how’ no challenge is too big and difficulties are turned into opportunities. In this case the fruits of breaking through is the satisfaction of slowly touching and feeling the finished product as if it were alive, remembering all the hard work and difficult moments.

Now is the time to tell you the story through some images. This is the sequence of pictures illustrating the birth of the first Vaso Bianco and the essence of Produzione Privata craftsmanship.

1. The creation of the Vaso Bianco shape through the process of lathing. 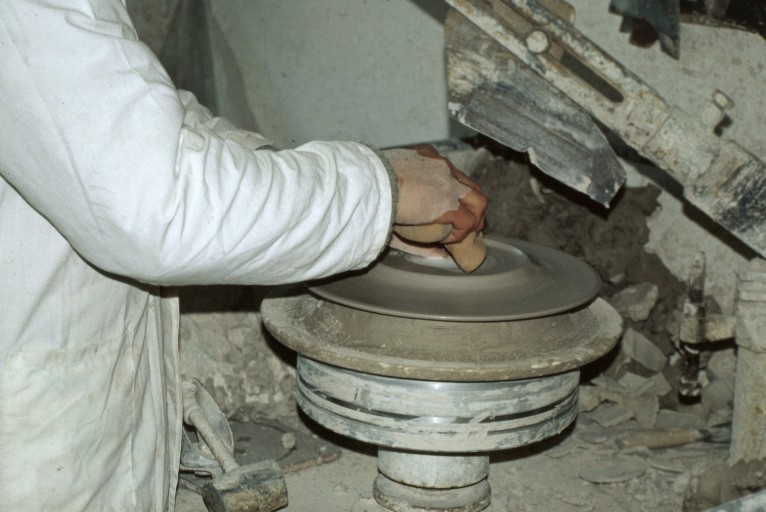 The first processing step is the preparation of the 'mother shape’ of the vase. The ‘mother shape’ is a kind of prototype lathed in the image of the designs of Michele De Lucchi. The skilled hands of potters shape the clay on the lathe until it is as close as possible to the original intuition.

2. The Lathed 'Mother Shape' is used to create the cast for the Vaso Bianco 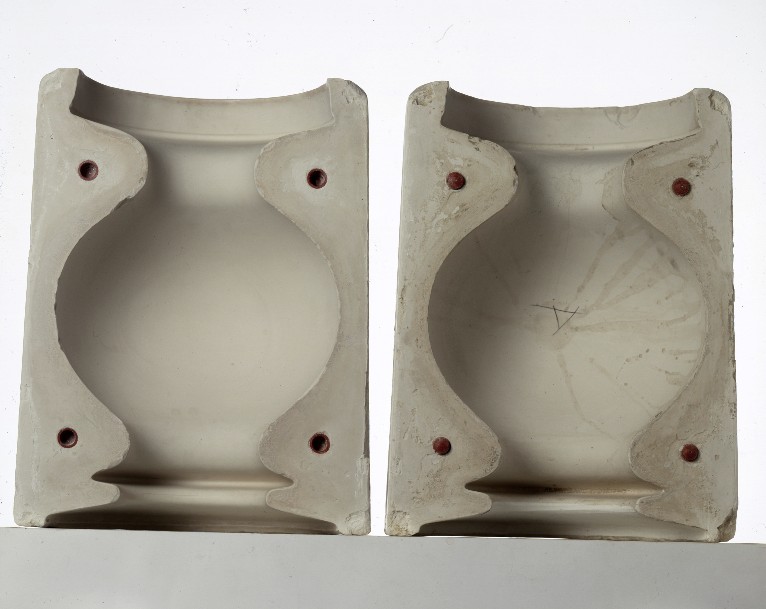 The mold which is made of plaster is an imprint of the ‘mother shape’. Once the mold is ready and the mother vase removed and some minor revisions are made. Then semi-liquid clay is poured into the mold solidifying into position by slowly losing its water content.

The next step is the drying part, by natural means which means waiting until the clay loses its last remaining water contents and slowly solidifies into its final shape.

After the drying process the vase is removed from the mold.

The crude vase naturally has some imperfections where the two mold halves meet, so the craftsman removes them by slowly and carefully scraping them by hand.

3. Next the clay vase is prepped for the first cooking in the furnace oven. 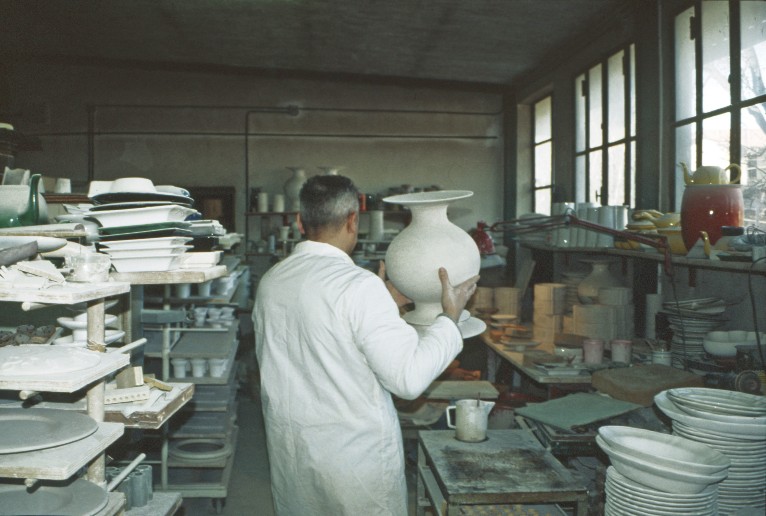 The vase is now ready for the first baking at very high temperatures in the blazing oven.

After this process the pot takes on the classic 'red brick' color known as 'terracotta'.

4. To become White Vase must then be glazed and cooked at even higher temperatures for the second time to achieve its glassy finish. 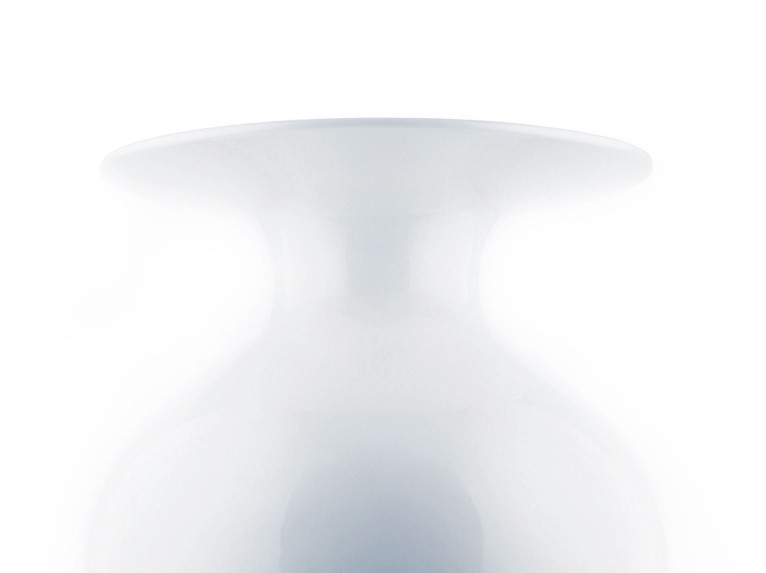 The final product, the Vaso Bianco, is a spotless beacon of light. The glazing of the second cooking gives it a particular transparity that creates a beautiful game of light and shade despite being completely white.

THERE CAN'T BE WHITE WITHOUT BLACK

After 14 years of the Vaso Bianco he realised he was missing something, just like the ying and the yang, Adam and Eve, the dark vase was missing. So the Vaso Nero was created. Black and white are opposites in the popular imagination (and very often are not even considered color) but when 'play' a glossy surface result in a range of shades of light and color. Black is scientifically lack of light but a shiny black vase has a bright light and does not reflect on itself the colors of the environment. In contrast, white is 'the presence of all visible light' but a white vase reflects on itself all the colors of the space around him. The Black Vase entered production in 2004 is therefore a valuable companion to his twin brother.

Speaking of twin brothers, identical twins, just like the white & black vase. Did you know that Michele De Lucchi had an identical twin? 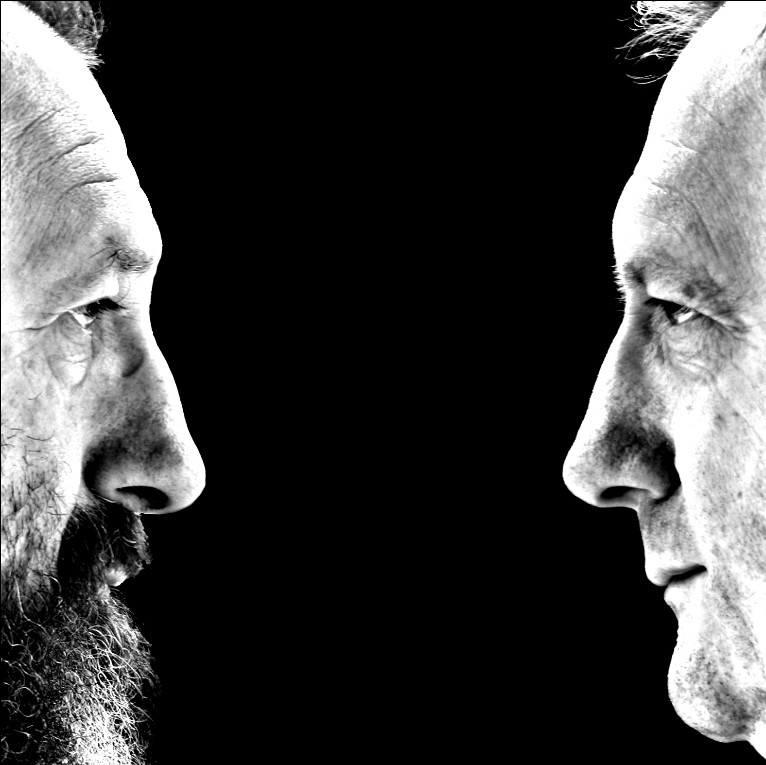 So. In the same way De Lucchi differentiates himself from his twin brother Ottorino De Lucchi with his black beard, he could not leave the Vaso Bianco alone without his identically opposite brother the Vaso Nero.

Ottorino De Lucchi is a very talented artist too and has a particular skill to capture the essence of still life object and representing them with extreme realism.

The painting below represents the Vaso Bianco which seems to be black. 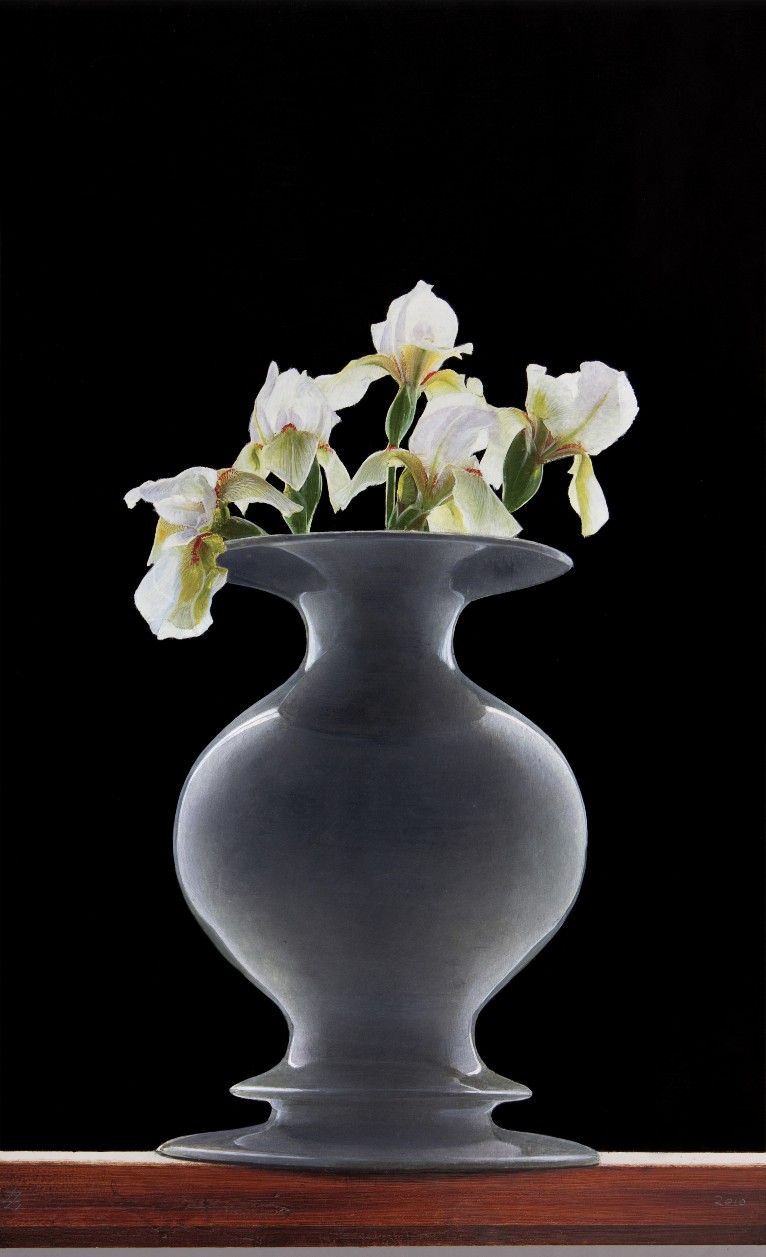 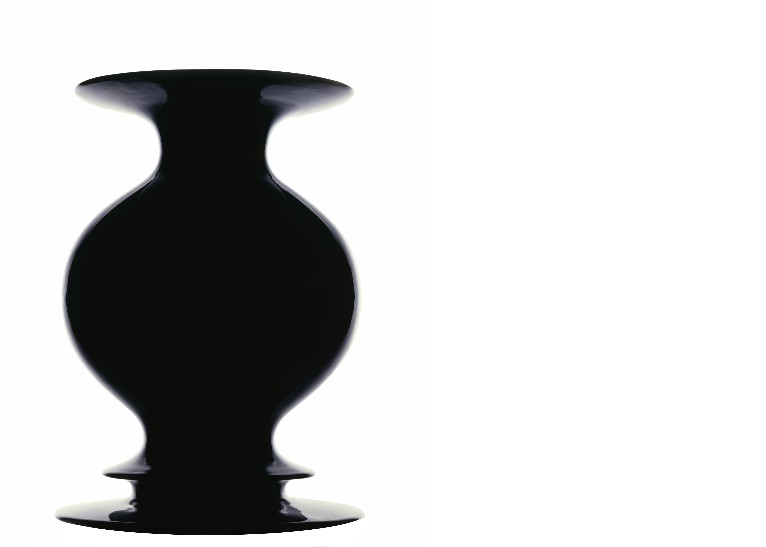 «The White Vase, a classic of Produzione Privata, now has a companion. As the white color in the ceramic has its own characteristic, shades and its own elegance, so does the glossy black just in reverse. Black Vase has a bright light and a depth never matched by artificial materials.» Michele De Lucchi 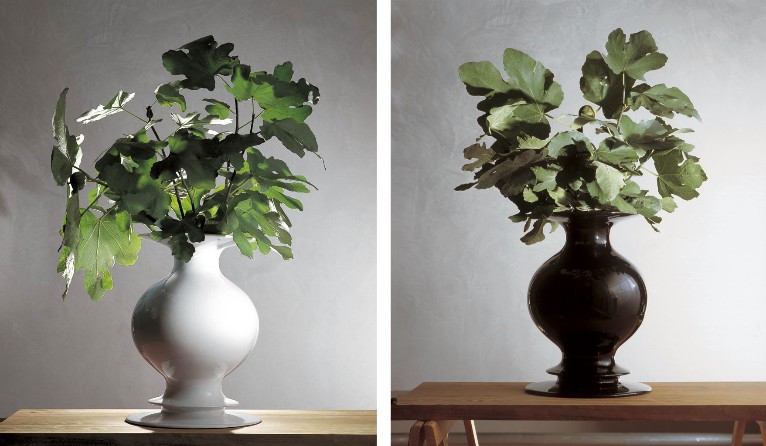 Vaso Bianco and Vaso Nero in their purity of colour and design are beautiful and emphasise any environment they fill with their presence. They are beautiful on their own and where born to be adorned with flowers and leafs. 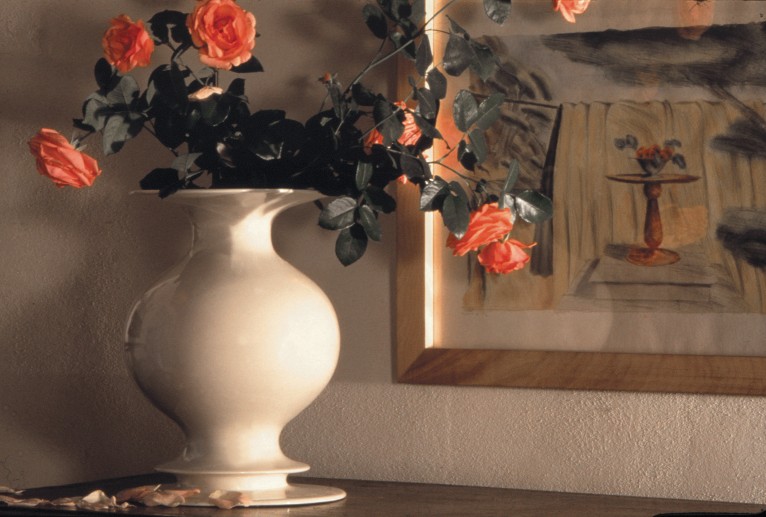 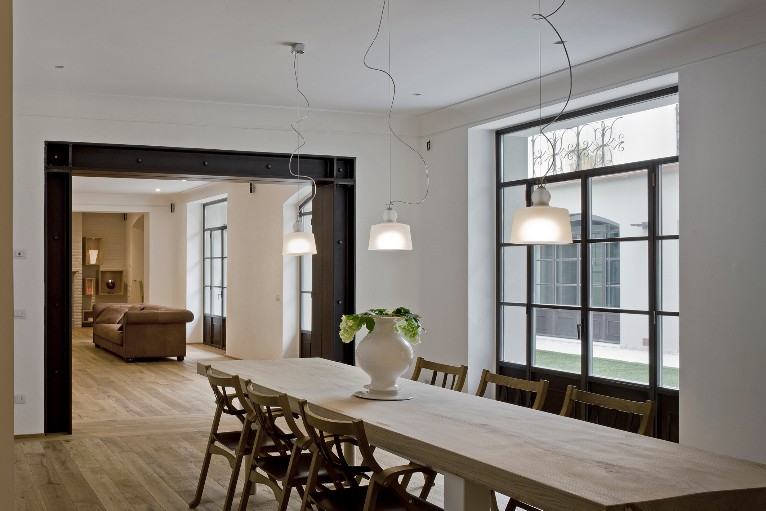 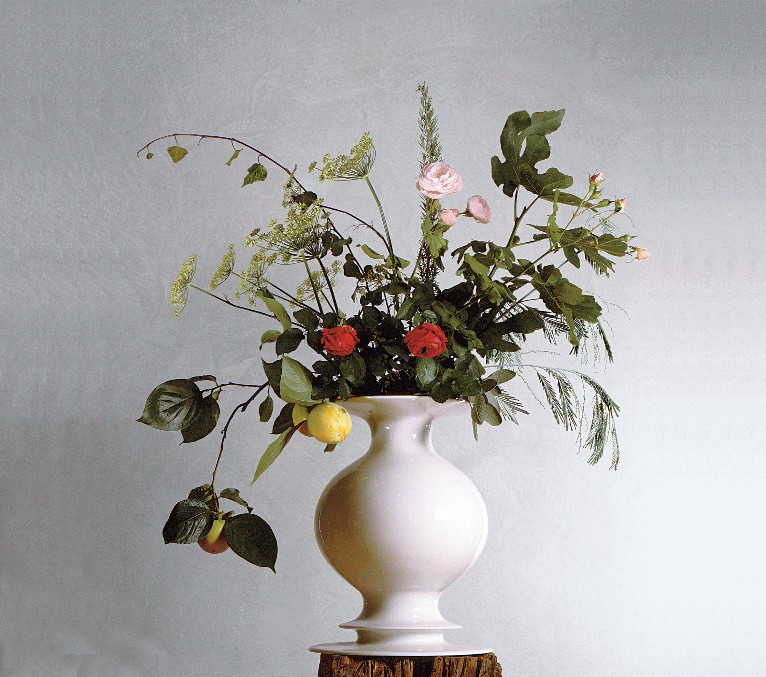 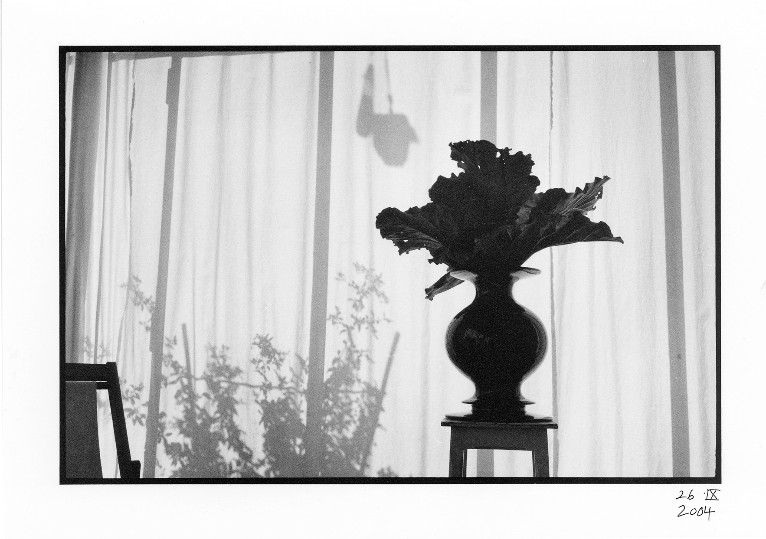 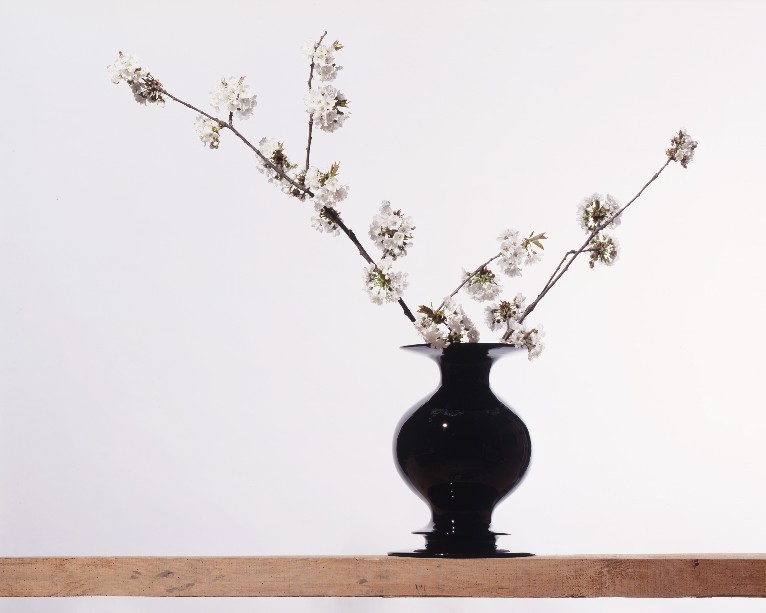 Now your time has come again to say goodbye and wish you farewell until our next story...

If Michele De Lucchi's Vaso Bianco and Vaso Nero have already visited you in your homes please send us your pictures and stories on our Produzione Privata Facebook Page. We will be happy to share them on our online community and most importantly show them to Michele! Or just join us on future journeys!