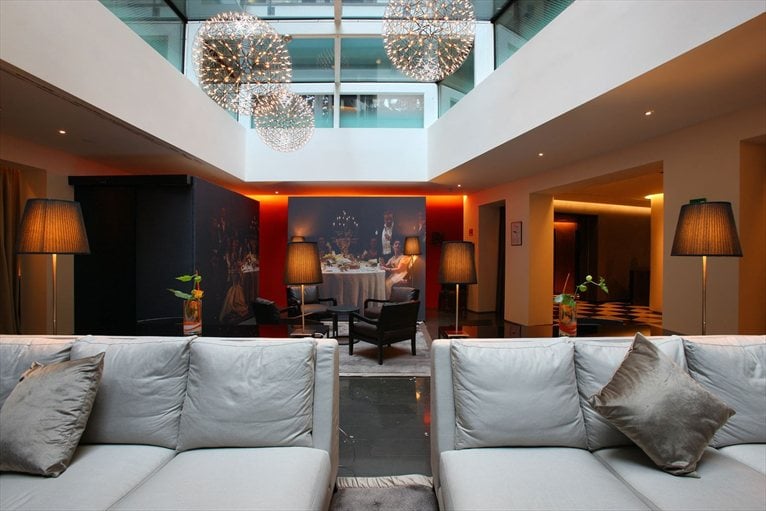 The Hotel Milano Scala is located in a late 19th century period building overlooking the elegant via dell’Orso, in the heart of the Brera quarter of Milan. The interior design of the hotel, which has a charming and quiet interior courtyard, was carried out by the architect Luigi Marchetti with Cibic & Partners. It is characterised by warm and refined environments whose furnishing and details constantly refer to music and to opera in particular, one of the strong points and the distinguishing feature of the city of Milan.

Life-size images on the wall situated in the common areas and in the rooms depict ballet scenes, theatre stages or the backstage, while each suite is dedicated to a different opera. Customised design and furniture, attention to and care of details and the many musical references are proposed to avoid any standardisation and anonymity, while recovering the cultural elements which abound in the Milan tradition.

Outside, there are two entrances to the hotel, one of which leads to the hall, while the other leads to the Lounge Bar. Then we come to the Lobby, the old courtyard of the building has been recovered and is now used as a conversation room, library, and lounge for individual music listening. The glass ceiling allows guest to soak up the view of the vertical garden and the fireplace.

The 62 rooms, 10 of which are suites and junior suites, cover the seven floors of the building. The rooms – some with a terrace or overlooking the courtyard and the interior garden – have all modern comforts. The top floor houses the 'Sky Terrace', a panoramic terrace with a spectacular view over the old city centre.

Another important feature of Hotel Milano Scala is its eco-sustainability: the first in Milan and one of very few in Italy, the hotel produces energy without burning any kind of fuel and thus without releasing CO2 into the environment. The process, which means we can talk of “Zero-emission hospitality”, involves an air conditioning and treatment system which recovers heat to provide hot water and is completely supplied by electric energy generated by energy providers availing exclusively of clean and renewable sources of energy. The hotel also has extremely effective heat and sound insulation, using materials which guarantee respect of parameters which are higher than the laws in force and which make the areas totally soundproof.

The Hotel Milano Scala has also recently officially entered the Eco Luxury retreats collection created in 2010 by Enrico Ducrot CEO of Viaggi dell’Elefante. This hotel format provides a blend of high quality services with a responsible business, management and development concept which focuses on safeguarding the environment. The most important news concerning the Eco Luxury collection and the one which directly concerns Hotel Milano Scala, is the segmentation of the structures which can boast being members of this prestigious “club”. The hotel has been included in the collection as the first Italian hotel in the category “Urban Oasis”, as it represents a responsible and successful hotel business model and its primary objective is to safeguard the territory, reducing waste and pollution.