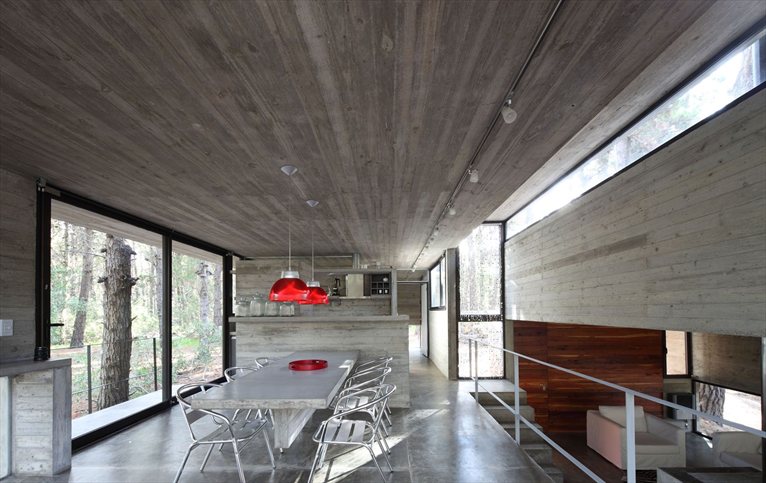 The description of BAK Arquitectos' Levels House, set in a pine wood in Mar Azul in Argentina, makes it sound like a new chocolate bar and maybe the crunching sound of the pine needles and cones as you approach the house furthers this impression. The purchaser had requested a holiday home made of fairfaced reinforced concrete for his large family for a few months a year.

He also asked for a spacious common area and for a fully furnished and equipped master bedroom to make it independent from the rest of the house. Another request was for the house to have several wardrobe areas because the idea was to live there throughout the summer for three months.

The particular configuration of the plot, its relationship with the road and the need for a project which established areas with a certain degree of independence are the themes which make this house unique, despite it being aesthetically similar to the other houses designed by the office in the Mar Azul area.

The house has been divided into four sectors connected to one another by means of a single staircase. This has made it possible to optimise space by eliminating the passageways from one sector to another and to exploit the natural slope of the land. The staircase has thus become the functional organising and spatial element which connects the sectors which require integration.

With this arrangement of volumes and by retaining most of the surrounding vegetation Bak Arquitectos have given the house the variety, flexibility and spatial independence requested, with particular care being taken over its integration with the landscape.