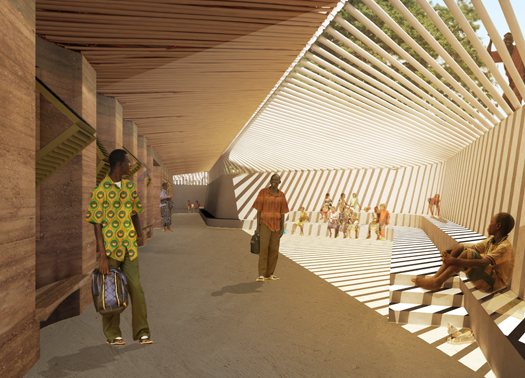 The winners have been announced of the Global Holcim Awards 2012.

The competition, carried out simultaneously in five regions of the globe, attracted more than 6,000 entries from 146 countries all vying for the total prize money of 2 million US Dollars.

The finalists of the 2012 edition of the Holcim Awards were whittled down to the final 15 candidates who were judged by the jury chaired by Enrique Norten, founder of TEN Arquitectos, for the Global Holcim Award category.

The winning projects come from Burkina Faso, from Brazil and from Germany:

- the Global Holcim Awards 2012 Gold was won by Kere-Architecture for its Secondary School with passive ventilation system in Gando and was awarded for having exploited a natural ventilation system capable of lowering the interior temperature by 5°C;

- the Global Holcim Awards Silver 2012 was given to Urban Think Tank for its Urban remediation and civic infrastructure hub in São Paolo, Brazil. The jury highlighted the merits of having devised an intervention capable of stabilising the land and creating a natural arena with terraced public spaces;

- the Global Holcim Awards Bronze 2012 was won by Realities:United for their Flussbad project in Berlin. It consists of transforming an unused arm of the river Spree into a natural “swimming pool” 745 m long.

The new award category Global Holcim Innovation, on the other hand, extolled the virtues of the best projects dedicated to the use of innovative materials. The jury chaired by Harry Gugger, Professor of Architecture at the École Polytechnique Fédérale de Lausanne (EPFL), Switzerland had the difficult job of choosing the three winners from the 53 prize-winning regional projects.