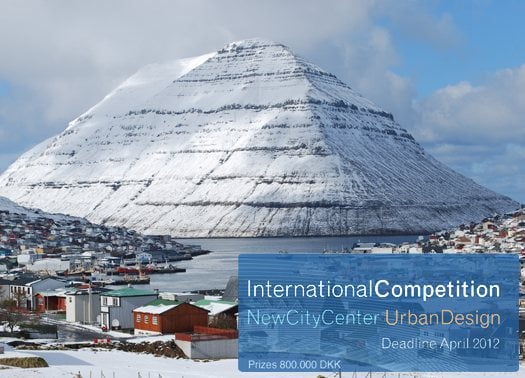 The city council of Klaksvík, a city in the northern part of the Faroe islands, has organised an international competition for the Urban Design of its town centre. The brief can be downloaded from the following link

All the typical aspects of town planning have to be addressed, from traffic management to leisure areas, from public offices to smaller information and commercial services. However, all this comes in an extreme context, in one of the most isolated areas of Europe, in an imposing and as yet unspoilt natural setting.

Klaksvík is the second most important town in the Faroe Islands with around 5,000 inhabitants and its port is the most important in the north of the Islands and in the summer it organises the biggest festival in these latitudes, the Summarfestivalur (http://www.summarfestivalur.fo/wb/). Not many projects from this isolated neck of the woods have hit the headlines, but of those which have, we can point out BIG - Bjarke Ingels Group's project for the Faroe Islands Education Centre.

Further information and material can be requested from the competition organisers (http://gjald.sna.fo/) at a cost of 300 Danish Crowns, the equivalent of about 40 Euros. The panel of judges has a minimum of 800,000 Danish Crowns (approximately 110,000 euros) available for prizes. Half (around 55,000 euros) will be awarded to the winner, the second prize will be around 20,000 euros and the remaining 35,000 euros can be divided into purchases or other prizes at the Jury's discretion.