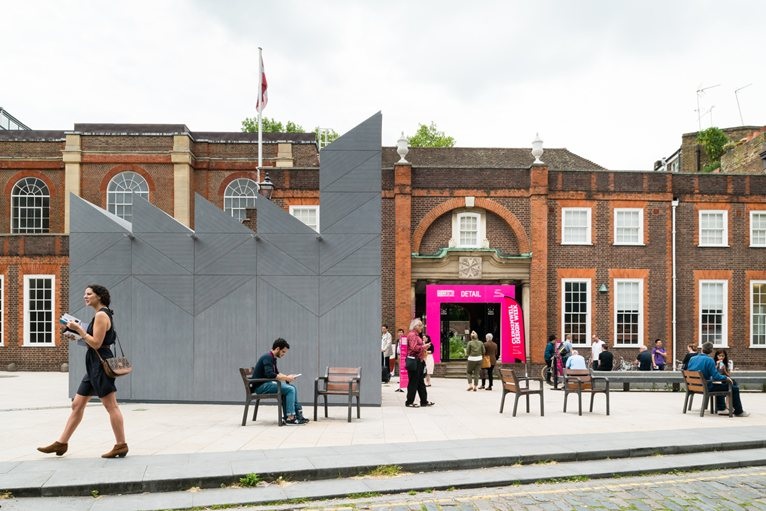 INTERVIEW _ Walking around Clerkenwell design week one of the most interesting installation, which brings into the most genuine craftsmanship dimension is Smith structure by Studio Weave.

I met them recently in their studio in the heart of Dalston. The common ground of their projects is not a banal stylish signature, but the research for idiosyncrasies to portray the uniqueness of the environment with an unexpected gesture. 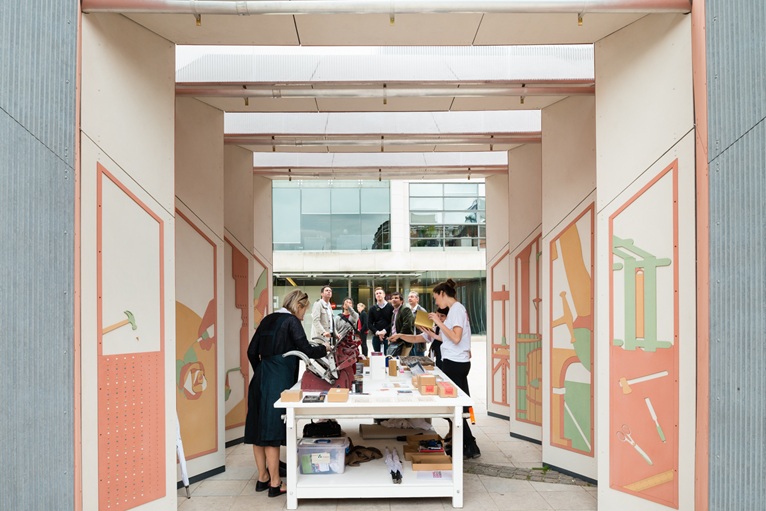 Could you tell us about the project that you have on show at CDW 2014?

Maria Smith: We are doing a pavilion and exhibition that is showcasing tools. Thinking about the process of making, not just the finished result, but the process that involves tools that you use applied to materials to change them. And how sometimes people can re appropriate tools from other kinds of craft and reuse them.

We are building a pavilion and there is going to be a number of craft people in residence in the pavilion over the three days, doing demonstrations, allowing people to get involved, trying different crafts and things traditionally being in Clerkenwell.

The pavilion is called Smith, which means maker, and is made from Equitone fibre cement. 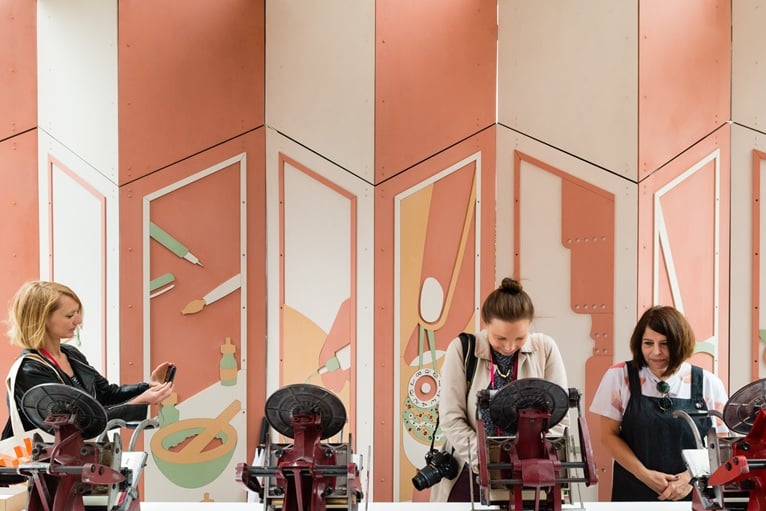 For someone who comes from abroad, London looks quite contradictory. A dichotomy between huge skyscrapers and the research for a local scale, that looks easier to manage and more settled in the place.

Maria Smith: It’s quite London. It’s definitely getting taller and denser, and the spaces in-between have a great importance about our public space.

We worked on a project recently. It’s a very large development and we were looking at the ground floor and how the public space can still work and feel connection to the history of the area. And somehow it still makes sense for both the historical area and the taller new development. It’s something which London is part of, very concerned with, more than other cities perhaps. It’s something that has to do with how the plan is set up. We want things very local, very grounded in history, but at the same time we want a city that is an international player.

There is a new generation of practices and Studio Weave is one of them. There is the GLA that offers practices like ours opportunities to be involved in public ground and sort of regeneration projects and that sense of place connected with history is often something that our generation is focussing on.

For example Cross Rail, a huge infrastructure project, at each station there is a really really small little moment that has to do with the escalator coming up right by the historic building, I don’t know if architects love this funny little gesture of position. London is such an eclectic city so it does make sense that you have these funny little things growing up against each other, people are really into these details. 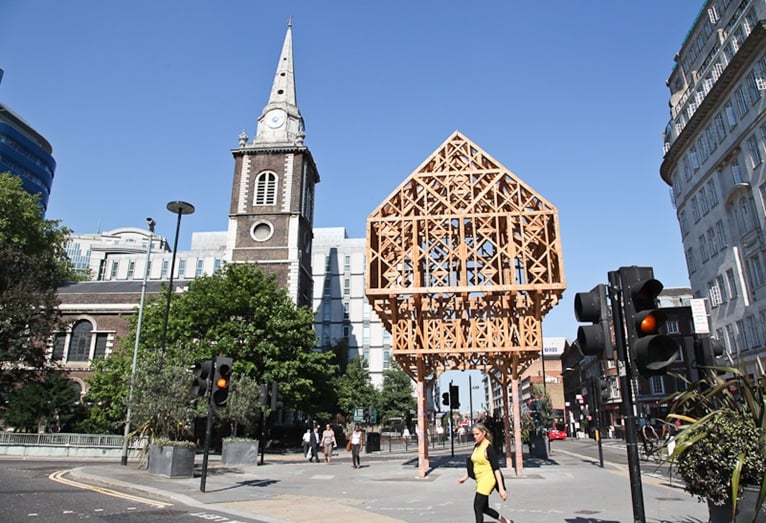 Do you think that this approach is something that is coming from a common ground of your generation or is it something connected with your personal background?

At Studio Weave we are all interested in stories, not just architecture references, we talk about all random things in the office, that still influence us. Maybe that allows for things to be more detailed and narrative.
We always start from the history of the place and finding weird people who want live there or kind of idiosyncrasies. 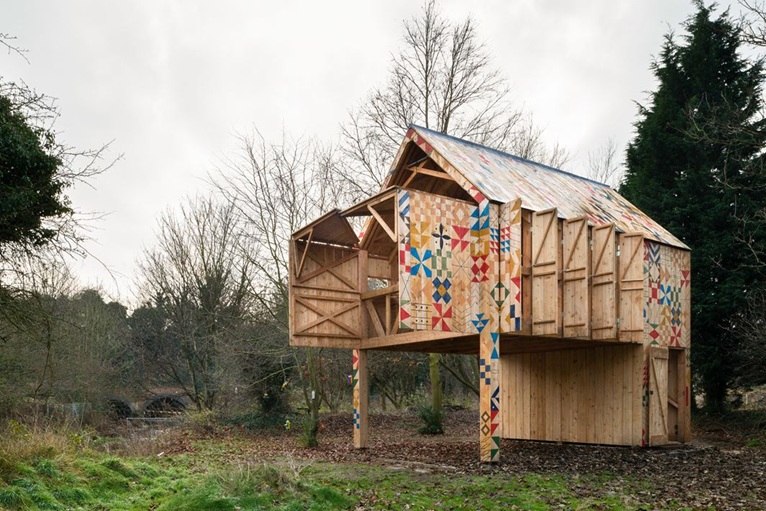 The Ecology of Colour _Dartford

What do you think is the winning key of your practice?

Maria Smith: We talk a lot about that and we decided that the winning key at the moment about us is that on the one hand we are really open minded about what the ideas may be, trying to be really playful and joyful total openness for anything, any potential idea could be quite fantastic and bizarre. And it is coupled with technical understanding, making sure that we work really close with engineers, makers ensure that all details are very precise and buildable. Make sure that these two very ends are covered and bringing together, because you can have an amazing idea and maybe you can express that as a story, or a painting or something but you can’t build it unless you go to really demanding technical. 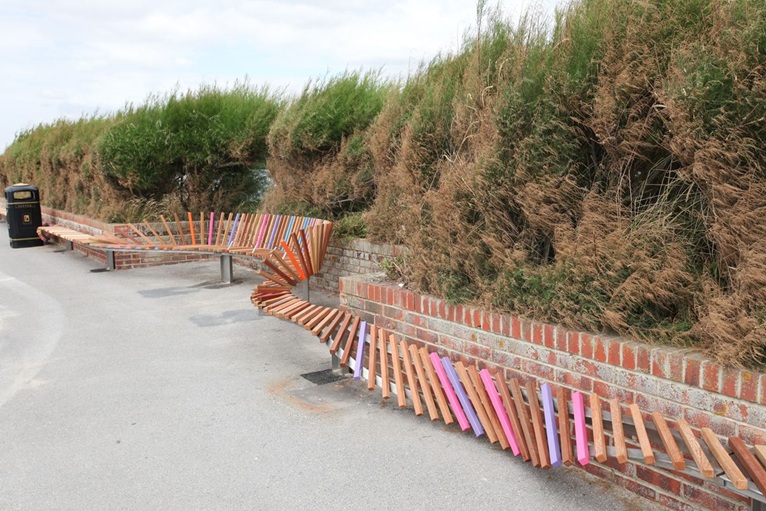 One of my favourite projects is the The longest bench along Littlehampton’s promenade. The structure sinuously travels along the promenade, meandering around lampposts, bending behind bins, and ducking down into the ground to allow access between the beach and the Green.
The bench is made from thousands of tropical hardwood slats engraved with messages from its supporters and initiated by Littlehampton residents.

The project that you design in the beginning is now going by itself, in a way without your control. How do you manage the fact that “your” project is not “yours” anymore?

You always have to do that give the project to way. People are going to live there, put a picture on the walls or take down and extend it. Even earlier than that the craft people that make it are going to put their own impact on it. We try to let go a bit when it’s “appropriate” and enjoy and be ok with that. I think that is something that architects are not really good at. They always want to control everything. 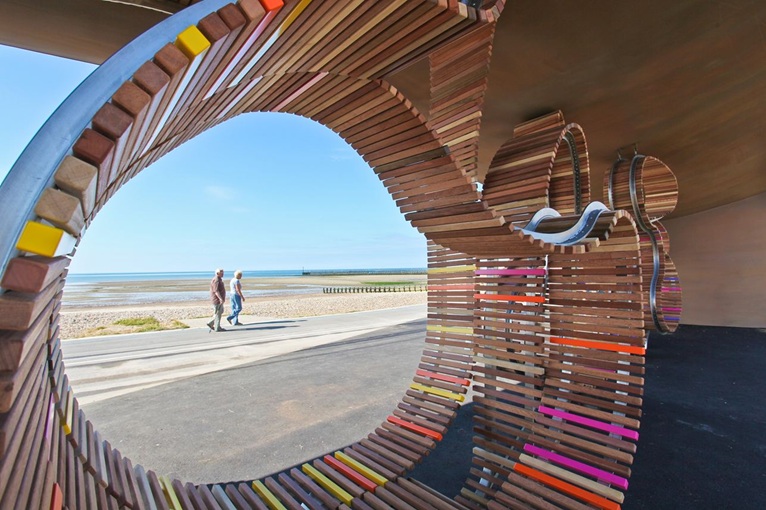 Could it be a metaphor for architects to understand that your project is yours just until some point, and then it is not yours any more

Maria Smith: It’s like a child leaving home. [laugh]
Esme Fieldhouse: The longest bench from the very beginning always involved so many people anyway, in that sense it is just a continuation of the process.
Maria Smith:I don’t know what will happen to the longest bench in the end, it has been planned to be extended further and to go into the Guinness Book of records. It’s 324 metres long at the moment and it needs to be 502 m to make the longest in the world.

According to the article of Maria Smith for The Architectural Review: “The women-in-architecture conversation has become stuck on issues of poor working conditions, straying over to parenthood that brings it right back into poor working conditions again. If we can’t break free of this cycle then the debate will inevitably deteriorate from ‘why do women leave?’ to ‘why do men stay?’” 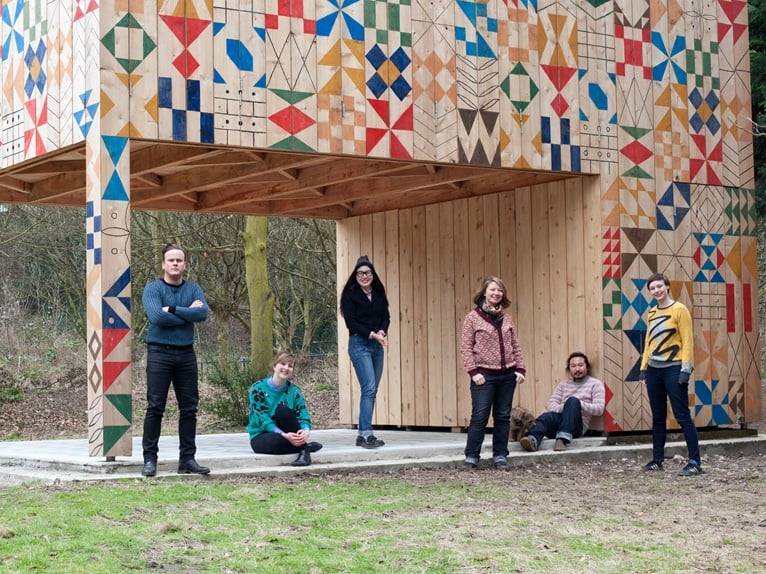 But what is the opinion of the men in the studio?

In our office there are 5 women and 2 men, so, in a small way Studio Weave is doing its best to re-balance the male: female ratio in architecture practice.

One problem that I see with the lack of women in architecture practice is it leads to a bit of a boys' club. When a room is filled with one type of person, as often happens at meetings when the production of buildings is being discussed, a clique dynamic can develop. When the room is made up by only men  (or even all white men of a certain age) there is a funny gang mentality, a tangibly different atmosphere in comparison to a mixed (age, gender, background etc) group. 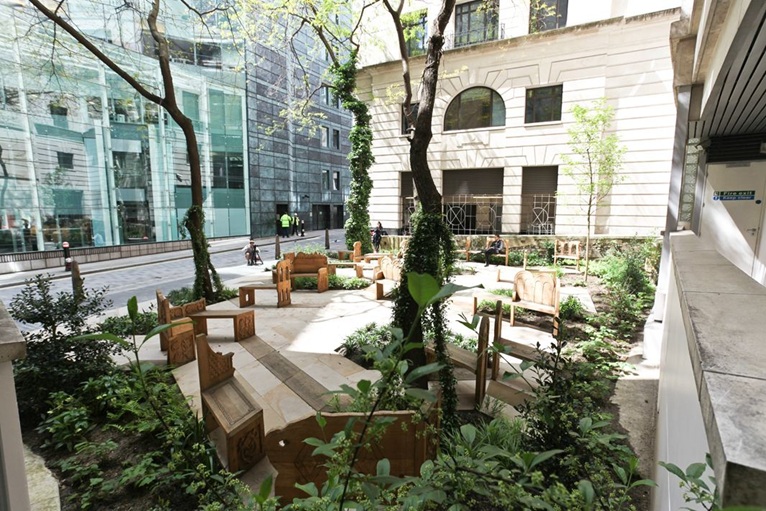