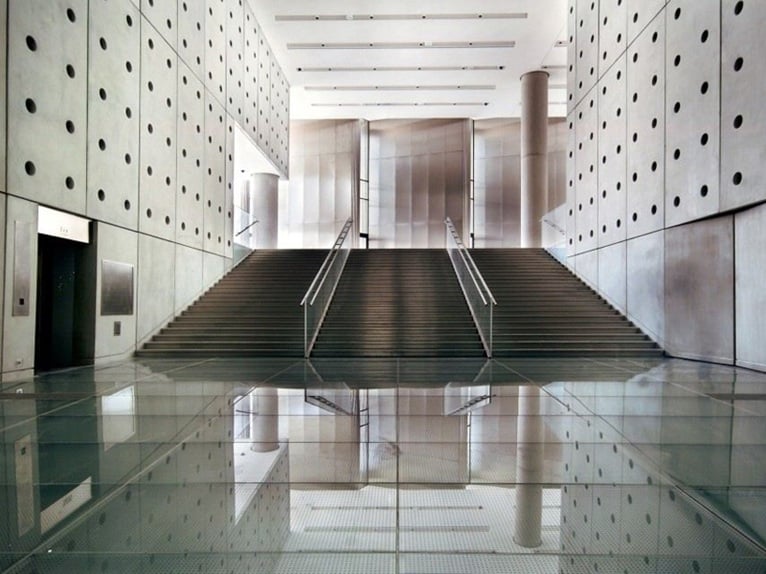 The New Acropolis Museum's Design was a saga of 33 years. After two pan-hellenic competitions followed the 1990's International one with 438 candidates' models presented at the Athens National Art Gallery for three months. 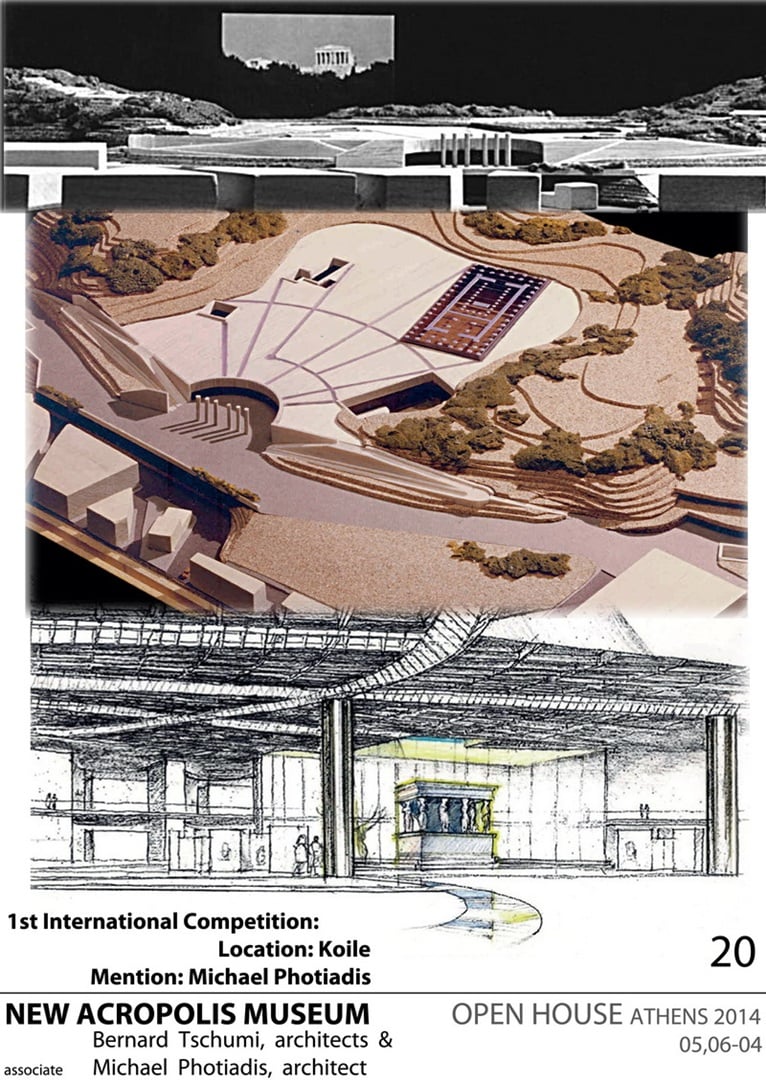 Three locations could be chosen: the Dionyssos Restaurant's, the Makrygianni (the existing location), and the Koilon, near the Philopappos hill, where my entry won a Mention. 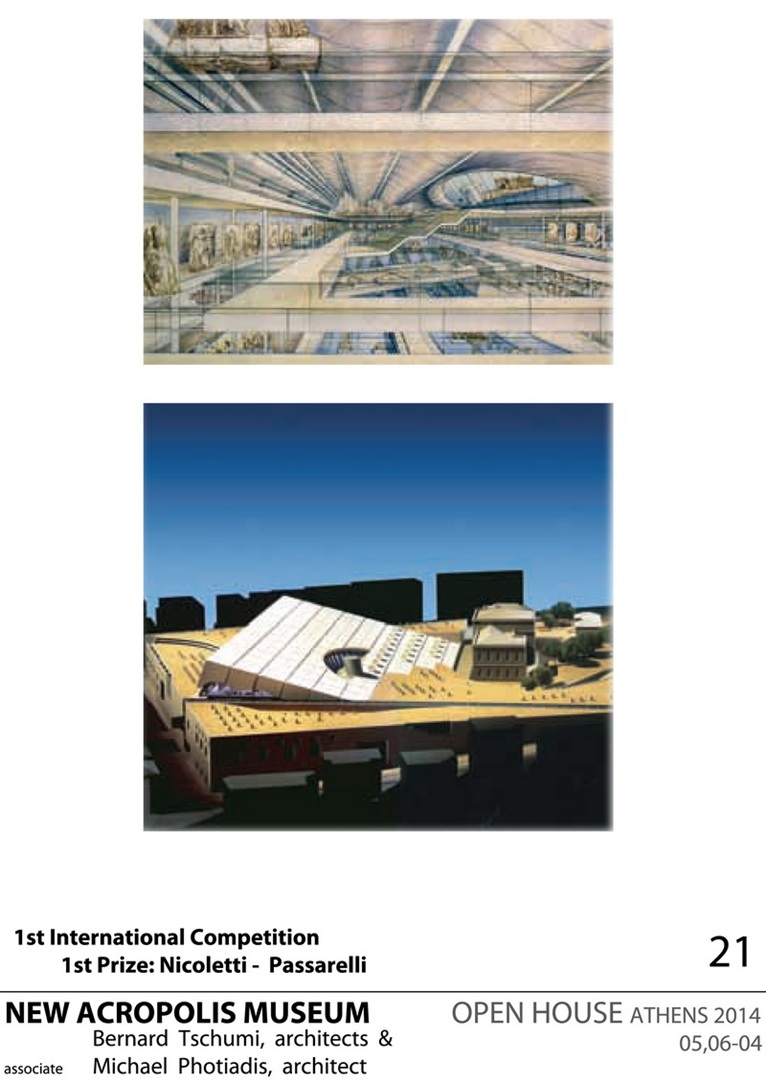 Winner was the Italian team of Nicolleti - Passarelli who worked thoroughly for about ten years. Due to site changes, (the Metro's underground circuit with station and new excavations), the Ministry of Culture and the Central Archaeological Council declared a new competition conserving all finds. The declaration became concise. A team presided by professor Dimitris Pantermalis required each candidate's 18 associates with a 50 page presigned contract to accelerate the study's implementation. 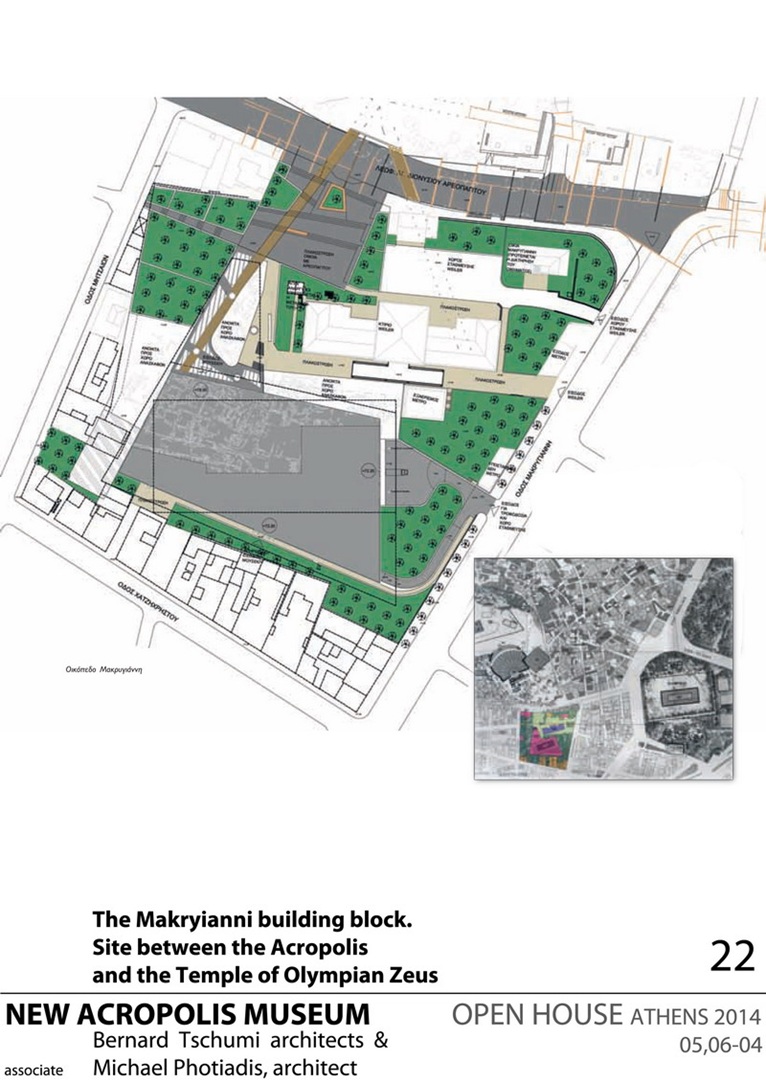 The Makrygianni Building block was surrounded by private apartment houses to be expropriated 20 years earlier. From the pedestrian Dionyssiou Aeropagitou boulevard a 25 m stairway descends to the Museum space. The gray trapezoid area is the excavations with a rectangle defining the Parthenon Gallery. Certain buildings are listed such as the left corner, hiding part of the Acropolis.

For Greek candidates a recommendation to associate with an experienced foreign colleague was deemed appropriate. I thought of Bernard Tschumi whose European projects were often the results of international competitions. My son Philippos, after receiving an awarded Harvard Masters, worked in New York at the S.O.M. offices and then at the more personalized Tschumi's office. To my invitation of association Tschumi was positive and we speedily organized our team. 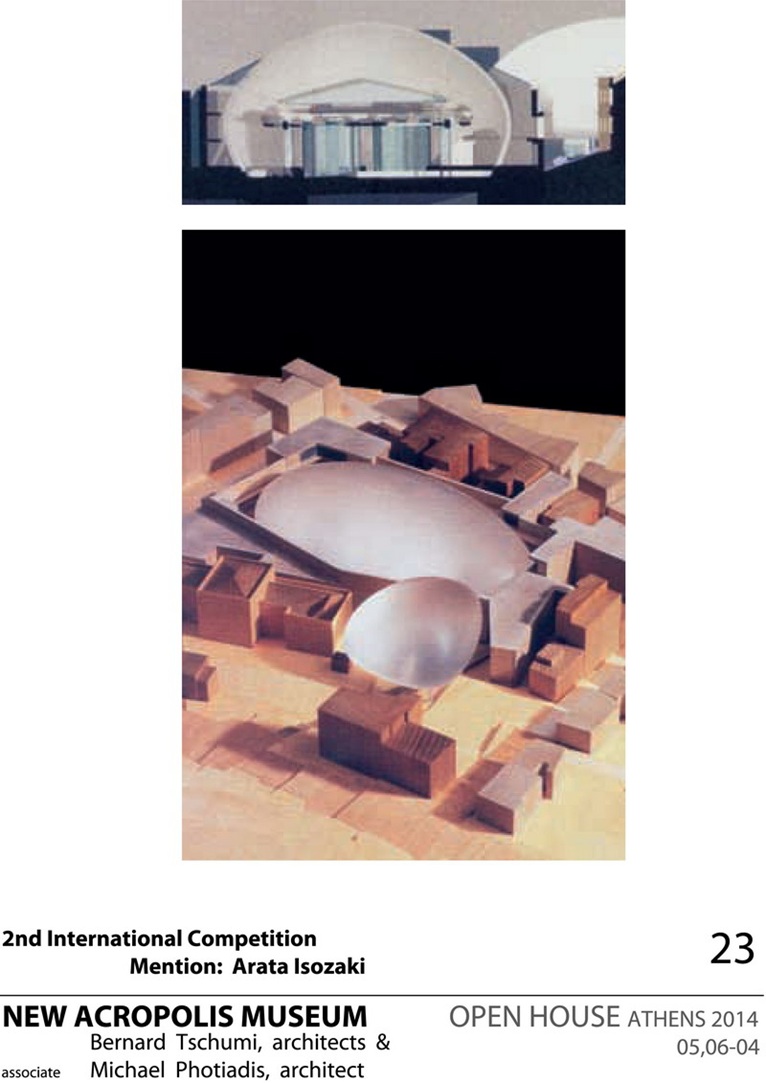 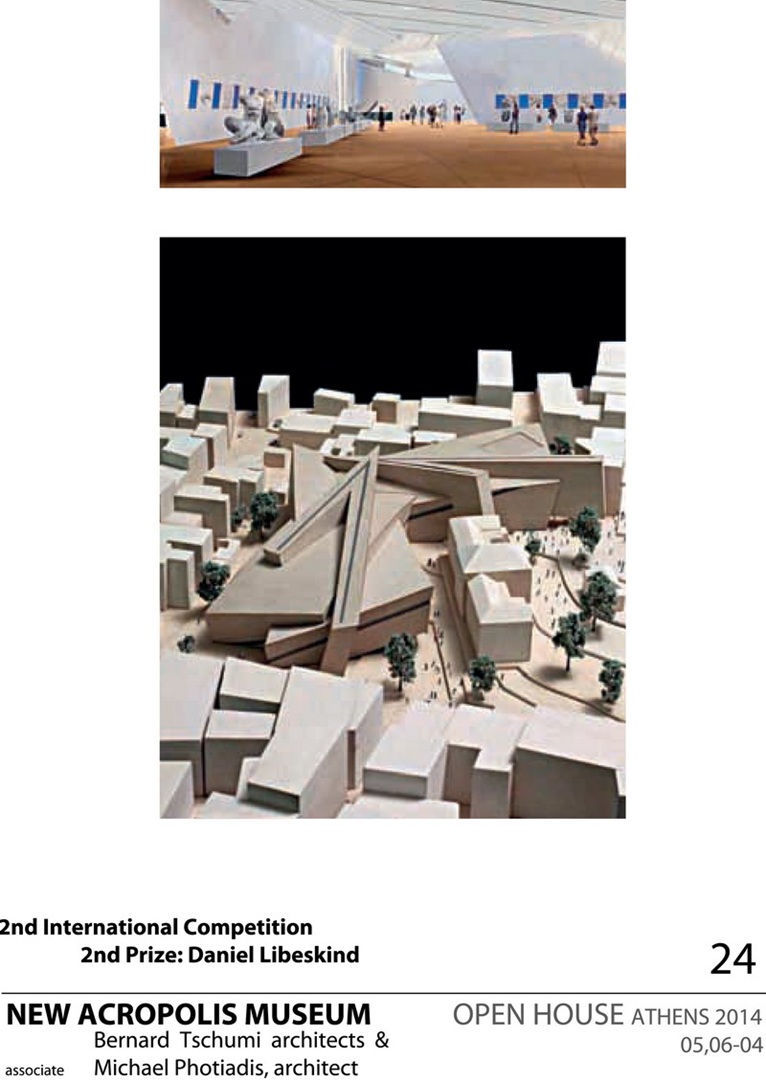 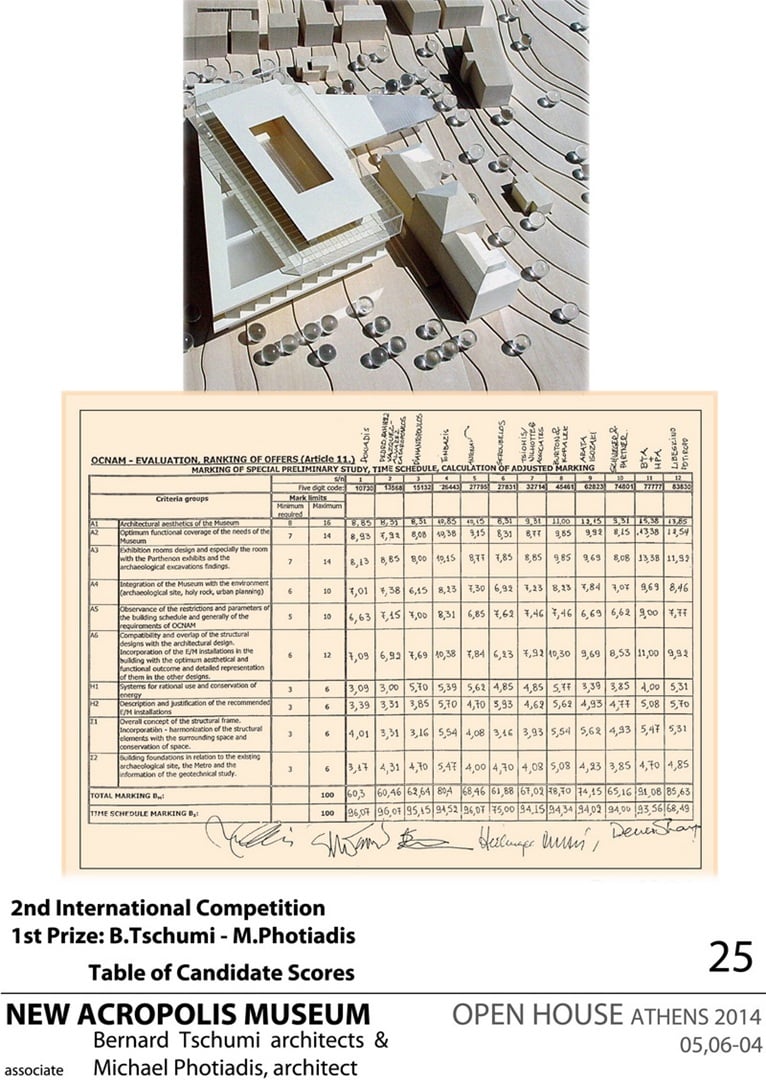 Our common decision was to cover the top crowning Parthenon Gallery with a glass shell which would receive Attica's light just as the classic Monument. 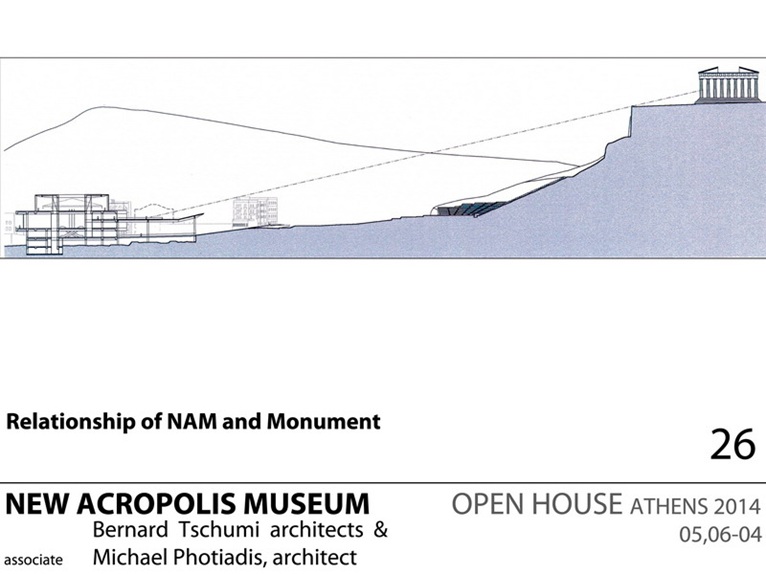 26. The relationship of the classic Monument and the Museum.
The design's delivery was in tight time stages with the two head architects visiting their associate's offices on the Atlantic's opposite side. The 7 hour difference between Athens and New York permitted the drawings' production phases at roughly half time. When one office went to sleep over night the other continued working. Drawings that were supervised daily, zapped over the ocean digitally. 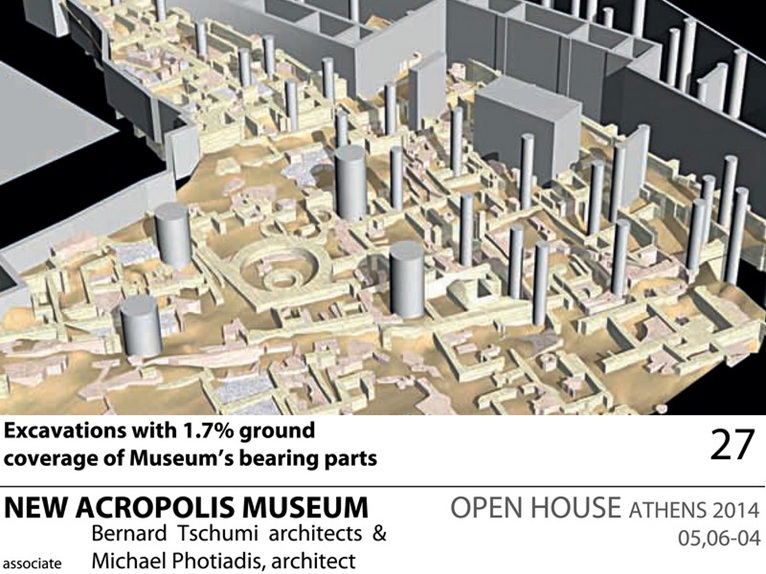 The excavations area and the Museum's bearing parts had to match smoothly. Lengthy meetings among archaeologists, civil engineers and architects arrived at detailed approvals. The measured surface of bearing elements covered less than 2% (1.7%) of the excavations' surface. These were middle class Hellenistic houses of the 2nd B.C to the 7th A.D of early Byzantium. 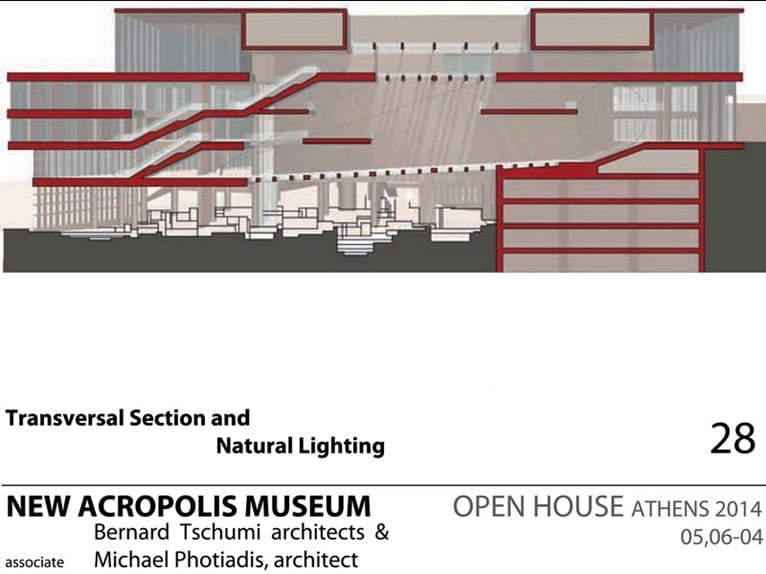 Transversal section of light funneling through the Parthenon Gallery's atrium glass floor to the excavations of ancient neighborhoods. 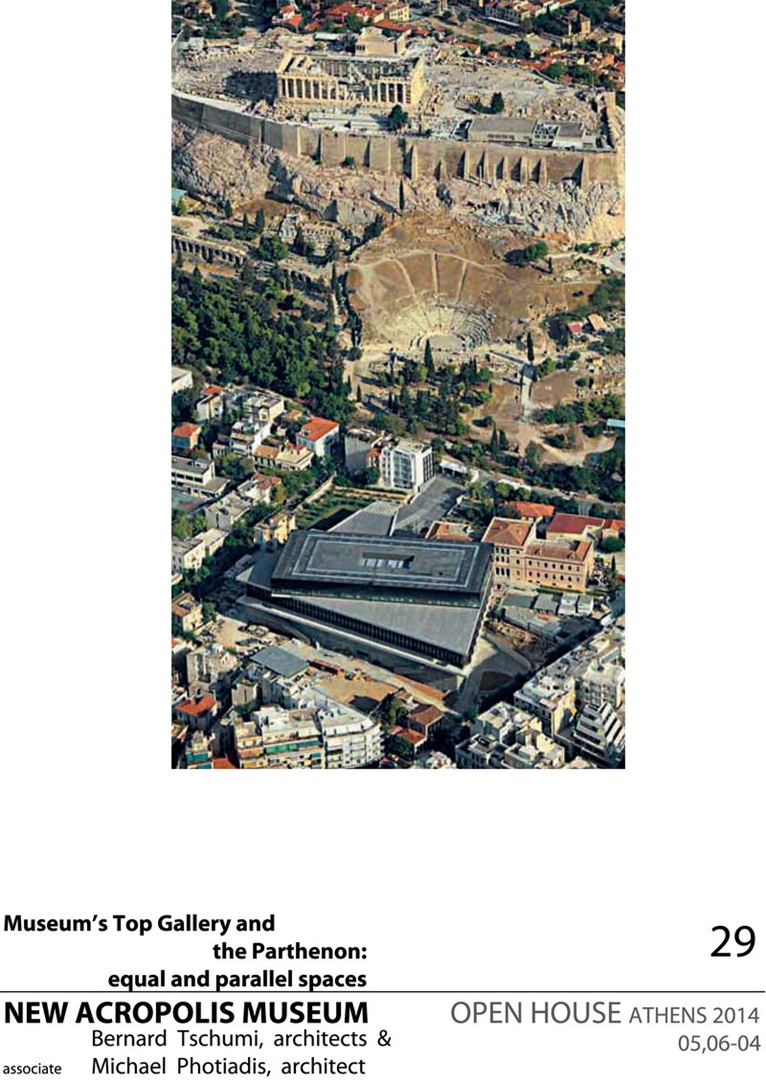 Early morning aerial photo underlines the parallel relationship of the equal sized Museum's top floor and the Parthenon. The axis of the Museum's Parthenon Gallery swerved by 23 degrees to expose the sculpted frieze to the same light angle as sculptor Phidias' Panathenean procession. 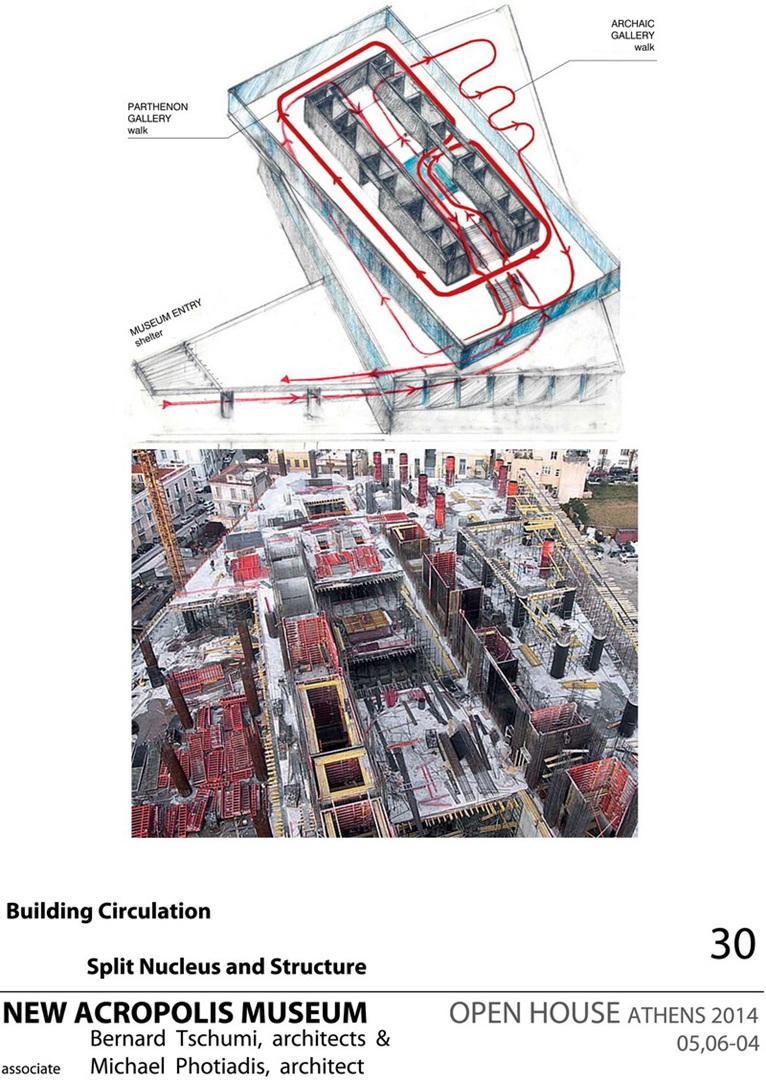 The visitors' circulation follows a historic double helix of ascent from the Archaic to the Parthenon Gallery with a north descent to the ramp and ground floor exit. The nucleus on all floors is split in two equal parts: 5m wide by 50m long they include 7 elevators, 8 fire safety stairs, installation passages and two public toilets. 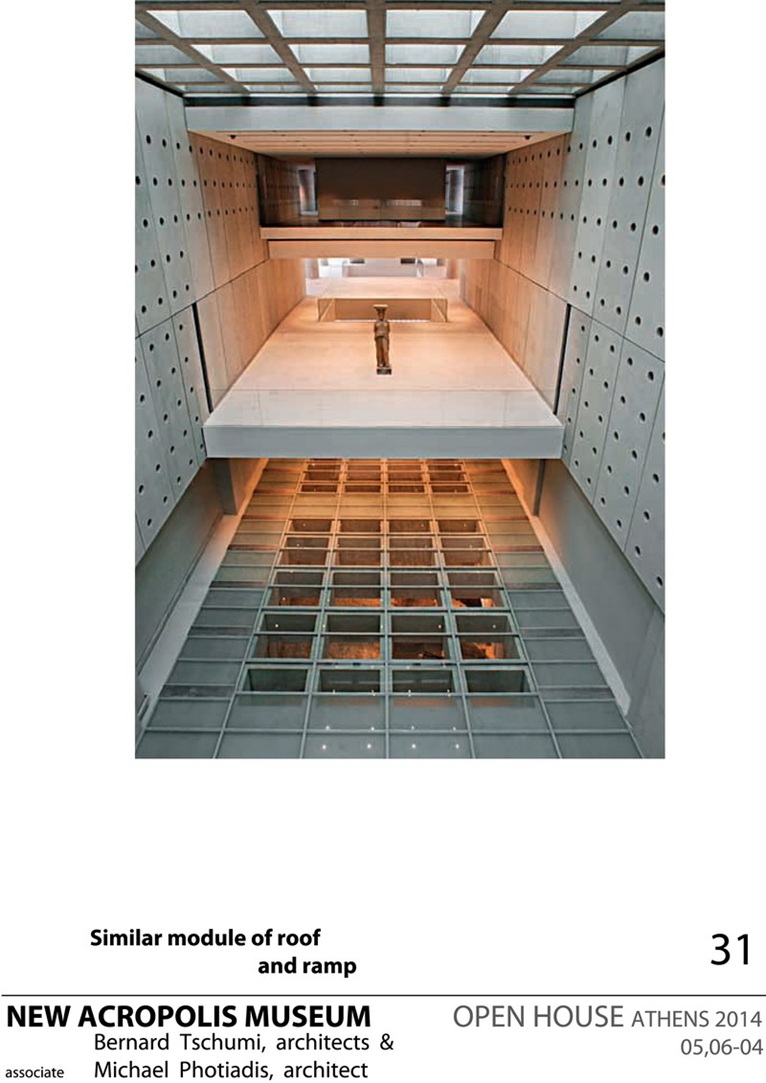 A Caryatid (copy) represented the ''worksite supervision'' three years before the inauguration. The space module of the roof has an equal layout at the ramps. The project faced 144 legal denunciations which delayed us by almost two years. 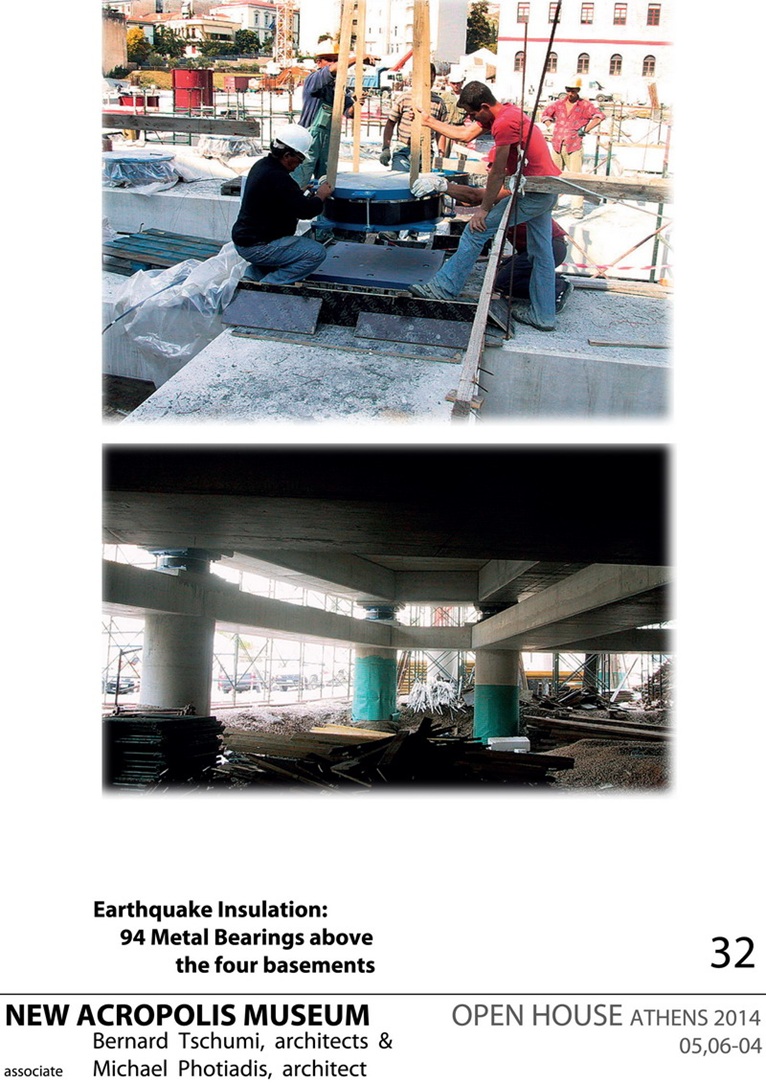 The collaborating designers or suppliers were all European. The seismic metal bearings were ordered to a German industry. Incorporated below the ground floor slab and above the four basements. Each of the 94 stainless steel bearings has different thrusts according to their position. They were each inspected by a U.S. laboratory before being sent for placement by a team of specialists. The inverted pendulum bearings consist of two concave dishes lying one within the other. They slide absorbing the seismic vibration. The structural design allowed a more open building than seismic Athens would permit. 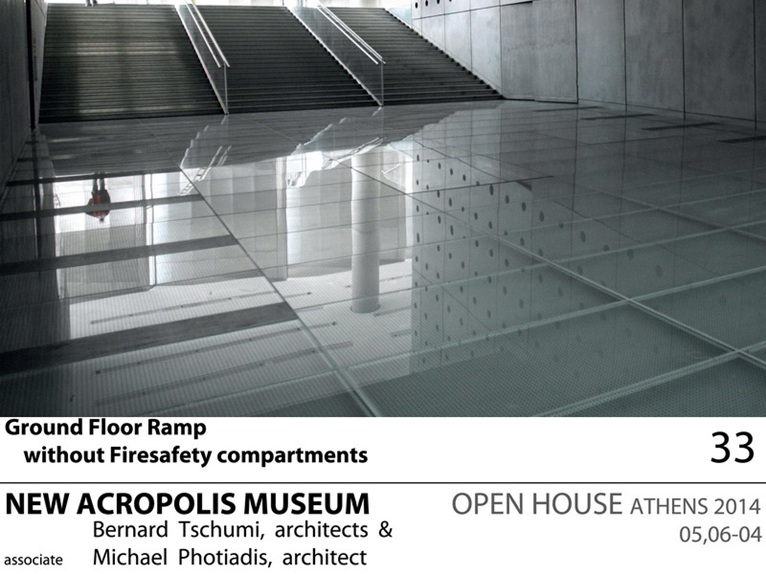 The main ramp symbolizes the stairway leading up the Propylaia. It also gives form to our simplification of the Firesafety system. By avoiding the normal fire protection compartments, spaces flows freely as fire safety curtains slide from within walls or ceiling at sensors' call. 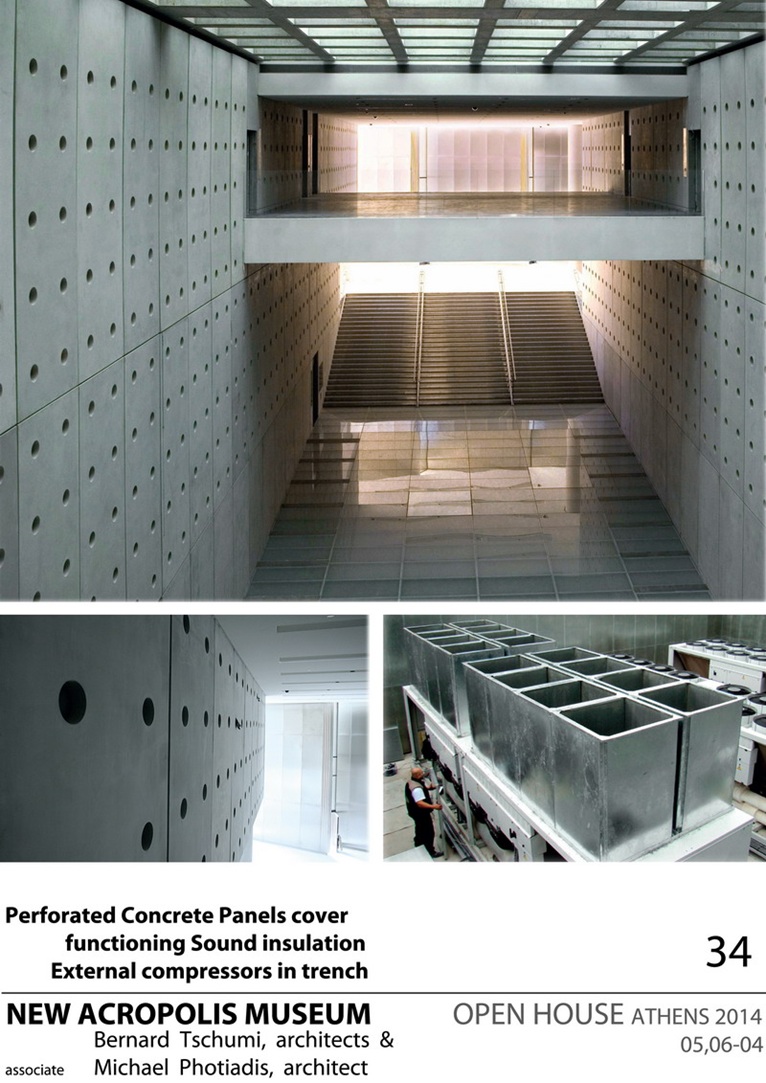 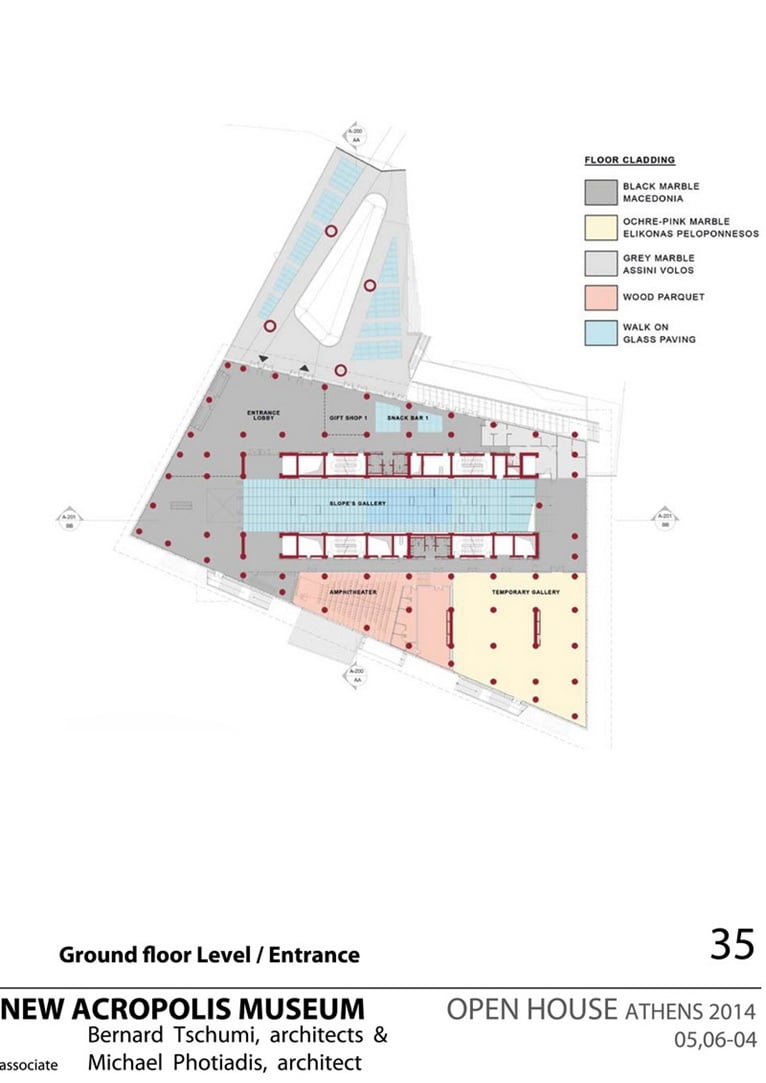 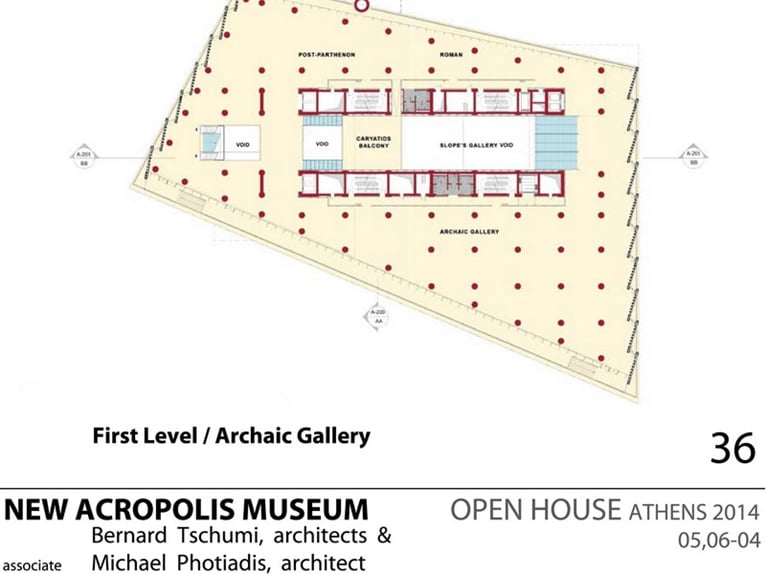 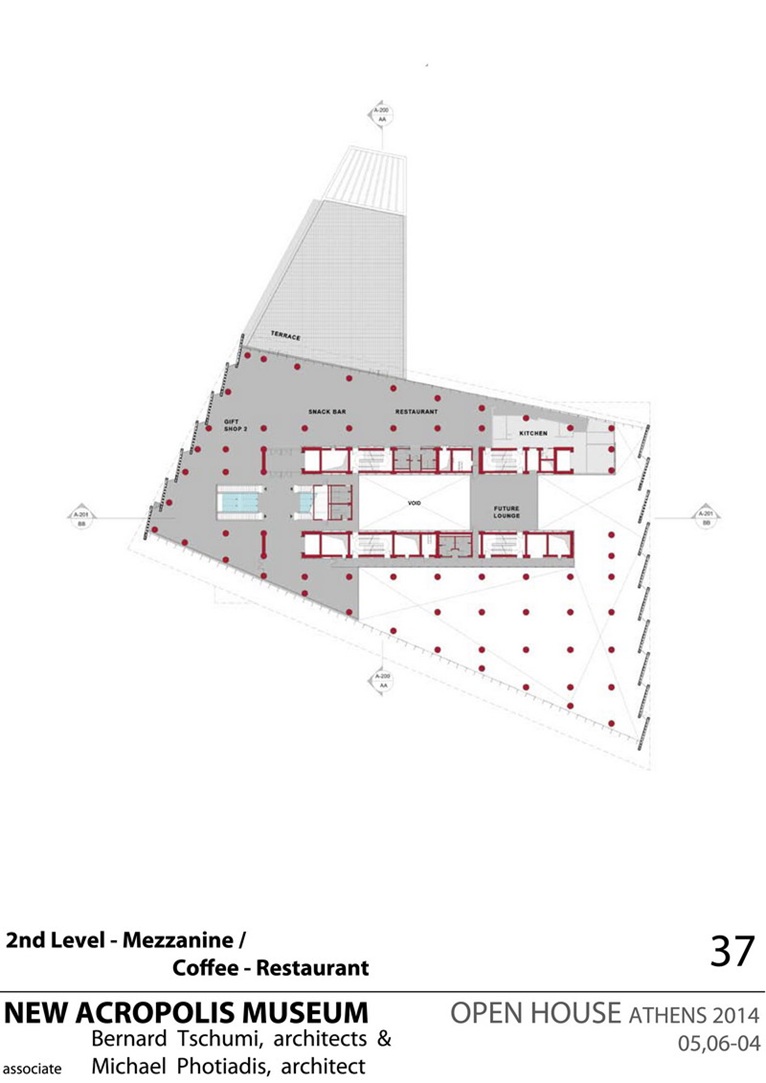 Second mezzanine level with the coffee - restaurant has a 700 m2 visitors terrace over the entrance canopy.

Third Level the Parthenon Gallery where the 160m long Panathenean procession is surrounded by the city's horizon. 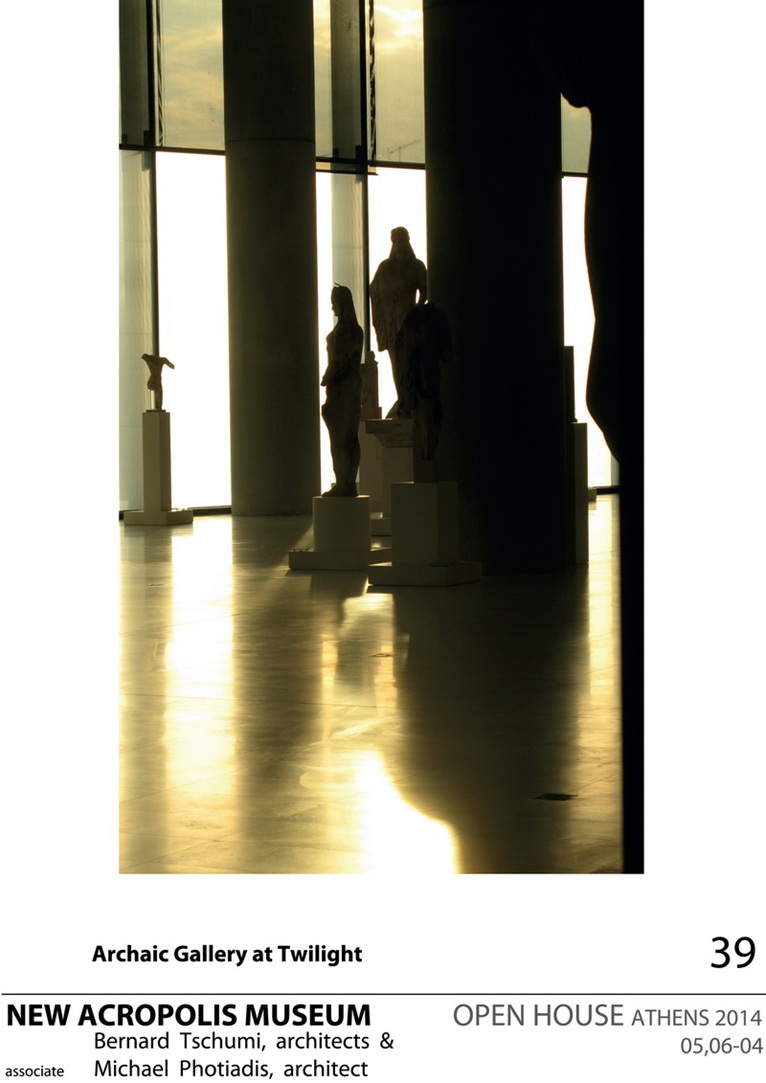 The Archaic Gallery at sunset when the setting twilight diminishes while interior artificial light takes slowly over through sensors. 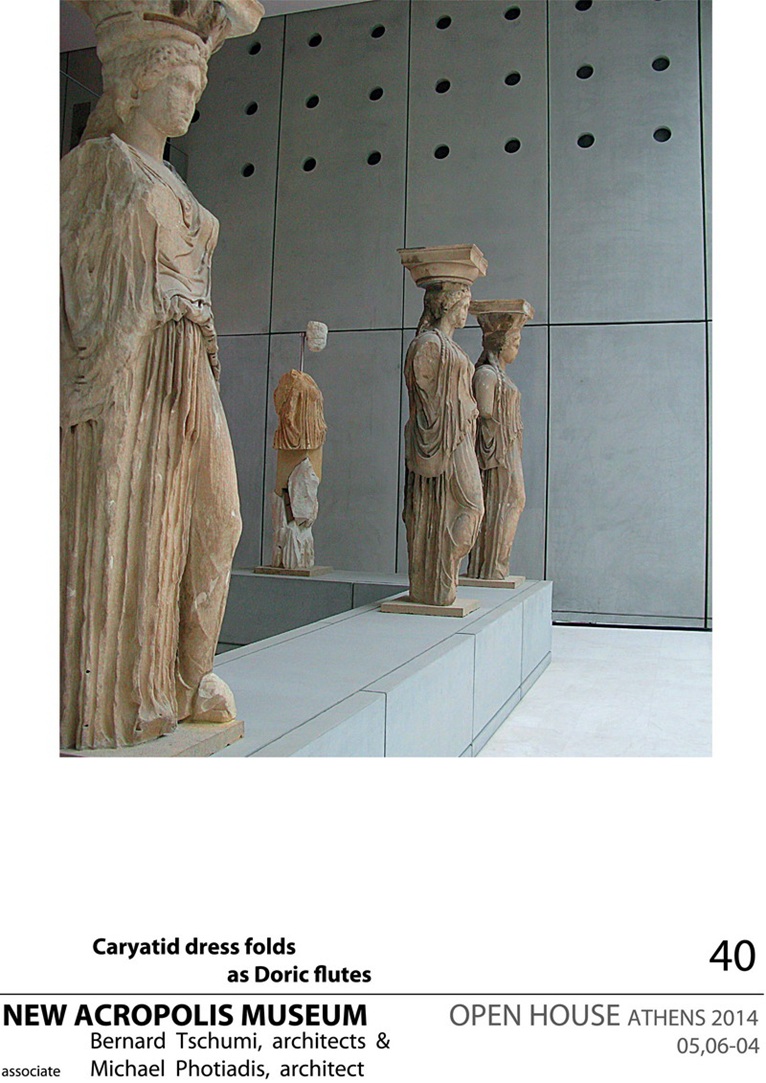 The Caryatids dress folds recall the Doric flutes. Each neck's strong plait helps them carry the Erechthion temple above. 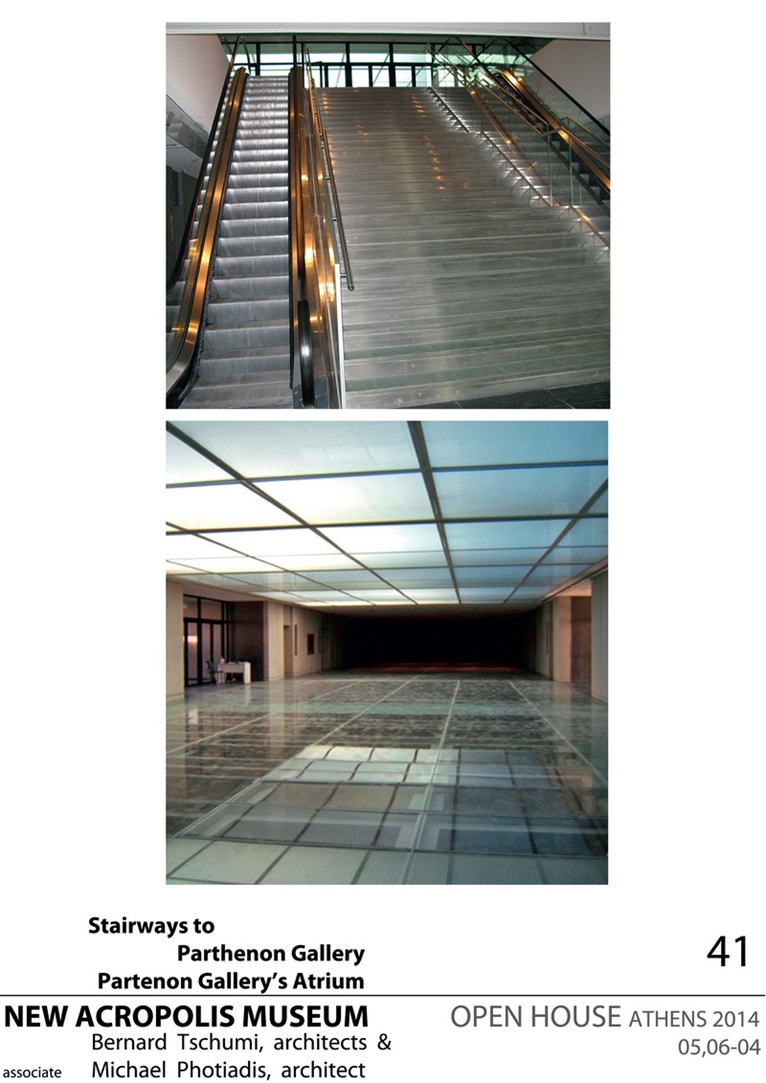 The main stairway to the Parthenon Gallery is sided by marble stairs.
Mobility problem guests reach every exhibit through elevator and mobile armchairs. 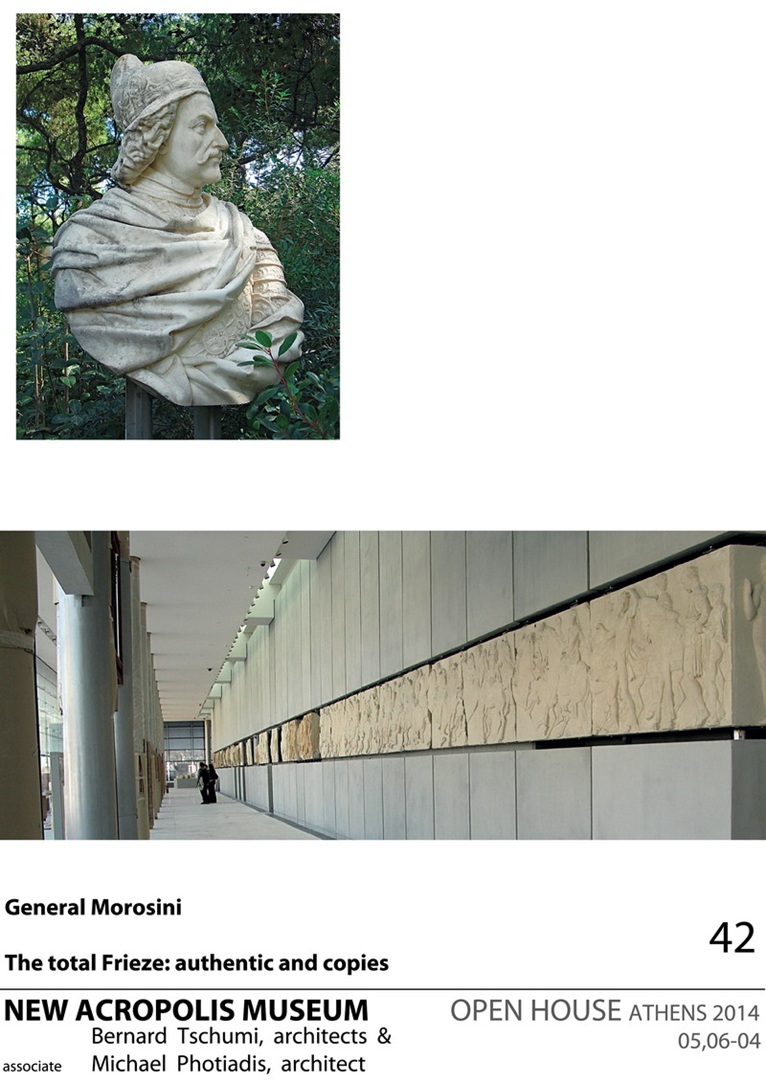 The Parthenon Gallery's central atrium has sandblasted ceiling with transparent floor with views to the excavations. 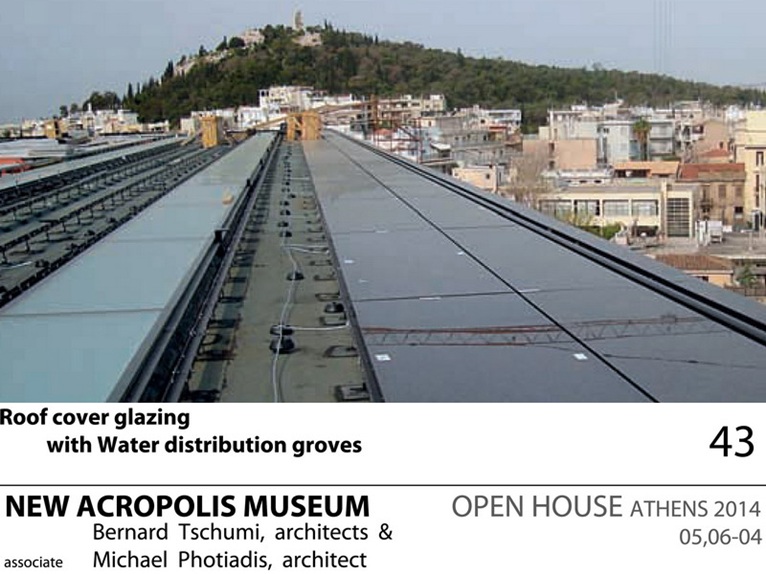 In 1687 Venetian general Morosini's bomb was targeted on the Parthenon _________ dynamite depot for Ottoman turks. This was the unique military destruction within the Monument's 2500 year history. Roof, columns and procession parts were blasted and sculpted forms were lost forever. The general's bust gazes from Athens bay to the Holy Rock like an Adolph Hitler in swanky hat. The frieze was carved on the marble bearing walls at a height of 12m (4 floors) only to be seen by the gods! Today they are down to the human visual height of 1.50 m. The original weathered marble stones (45%) and the British Museum (Elgin) white plaster copies (55%) are positioned in line for a total Panathenean procession allowed! The stainless steel slender columns retain the same distances as the Doric ones, keeping their procession's rhythm. 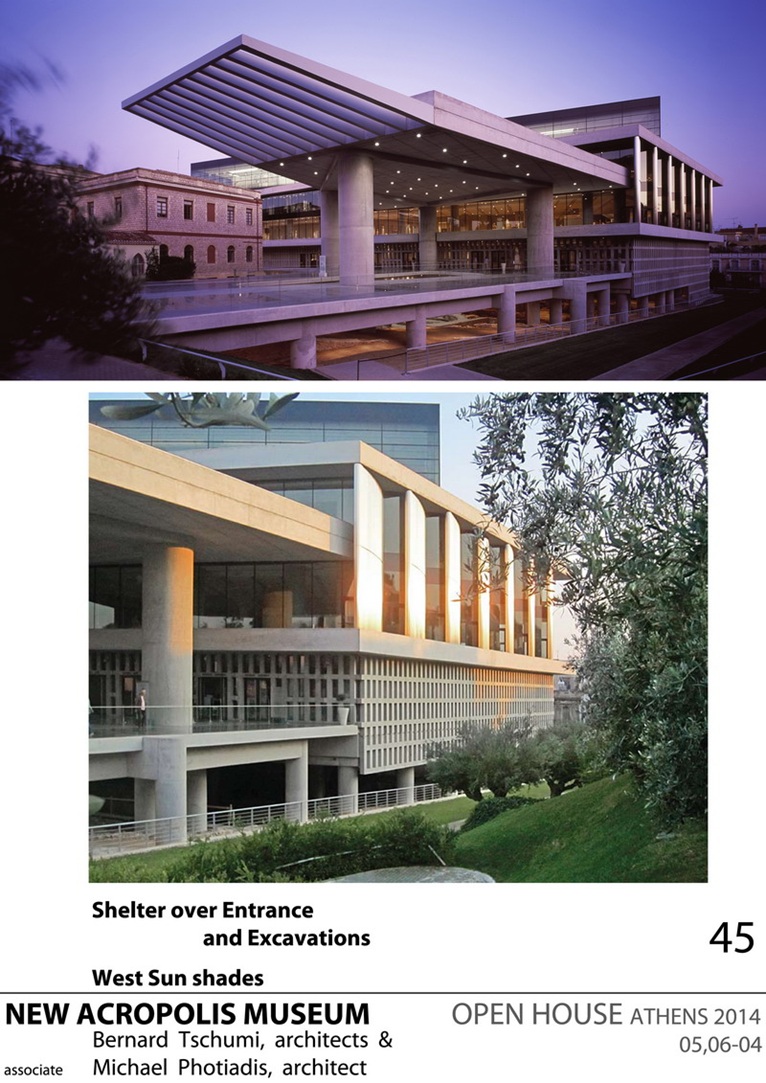 The vertical glass of the Parthenon Gallery continues at roof level, where rain water through wide channels passes to covered glass water drains for vertical disposal. 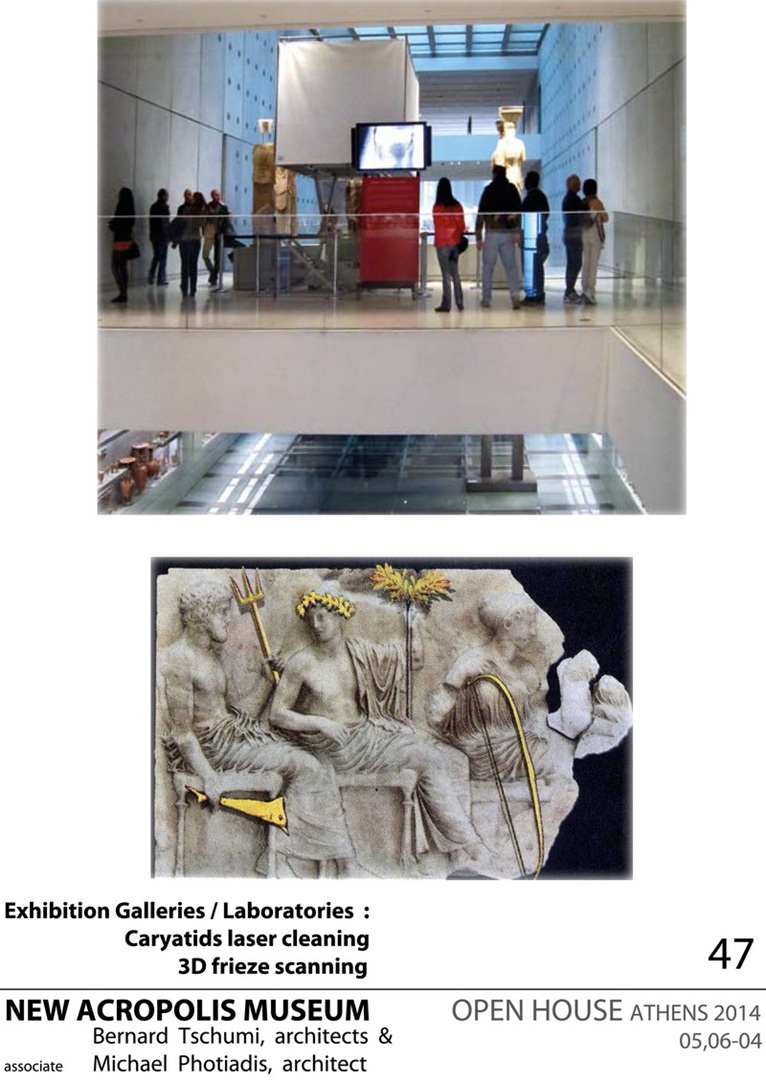 Risky was our choice for the top's gallery's glass skin. As promised we solved natural over - illumination and temperature protection. The low bench is a continuous duct blowing frozen air to the floor. This air warms ascending naturally within the exterior double pane glass chimney, reaching recycled air within the false ceiling. Temperature remains stable at 23 degrees even if outdoors it reaches +40 or -10. 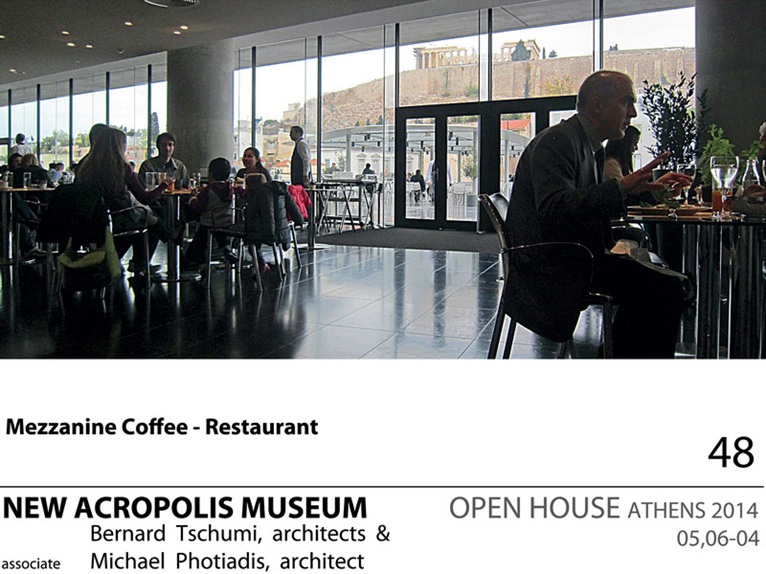 To enliven the museum away from its showcase quality, president Dimitris Pantermalis has allowed the display rooms to become concurrently maintenance and research labs in the visitors view. The Caryatids are being cleaned of centuries weathering with sensitive laser beams.
Important is the 3D high technology laser scanning which will join the 160m long procession parts. A private greek firm has scanned the Athenian and London parts. (These images will pass through the museum's site. 3D printing will allow extremely precise copies to be made without the original's human touch). Two small noted victories:
The New Acropolis Museum won the third most popular of 50 world museums as the Sunday Times choices following the Washington D.C.'s US Smithsonian Museum and the London's British Museum. It was also accepted as being within the four-top Museum Restaurants internationally.

This Weekend (5th and 6th April), the New Acropolis museum is open to the public as part of the Open House Weekend in the Greek capital.