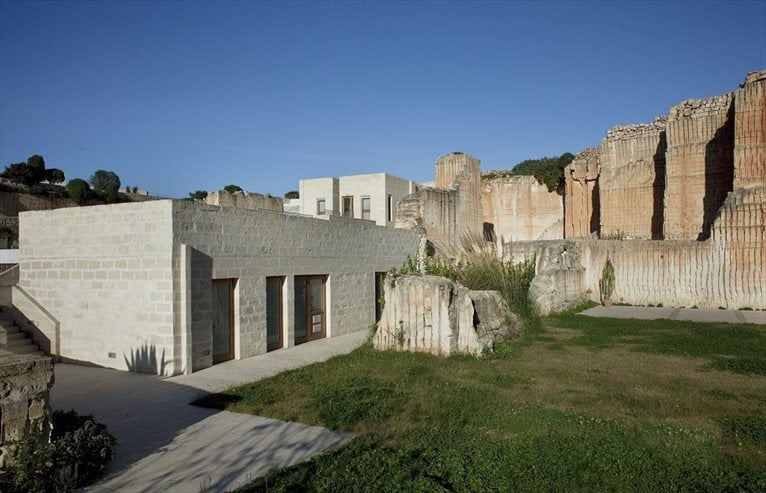 The landscape of the Isle of Favignana, one of the Egadi islands off Sicily, is characterised by a multitude of cave-like spaces, old quarries once used for mining limestone. In the past tuff stone quarrying was actually one of the most important businesses of the island. Studio cusenza+salvo's project, coordinated by the Trapani superintendency, envisaged the creation of a hotel structure, the Cave Bianche Hotel, by re-using the largest limestone quarry of Favignana abandoned in the 1980's.

The first phase of the recovery work had to immediately tackle environmental and technical-architectural problems. Indeed, the plan for the hypogeal hotel envisaged no modification of the areas excavated on the bottom of the quarry or of the great limestone walls (tall monolithic masses up to 12 metres high and five metres thick) remaining from the quarrying activity which began in the early 1900's.

The spaces on the bottom of the quarry marked by the limestone walls established the size and the layout and height of the hypogeal complex which consists of a sequence of volumes separated from one another by vertical spaces which allow light to filter in the internal spaces. A sort of crack, a geometrical configuration scored lightly in the ground.

The building, like a fossil, reproduces the negative of a past reality, reconstructed by its absence and is a homothetic shape of the missing volumes reproducing them in its own body like empty archetypes. The area covered by the hotel structure covers thirteen thousand square metres. The excavation area located at a height of twelve metres below the ground level covers 9,500 square metres.

The buildings partly occupy the ground level and partly the excavated level. The building constructed at a height of 0.00 is designed as a great wall with few openings which mark the boundary between the intervention area and the local road Fanfalo.

The plan is articulated through the combination of several volumes, with natural lighting coming from above which influences the internal distribution.