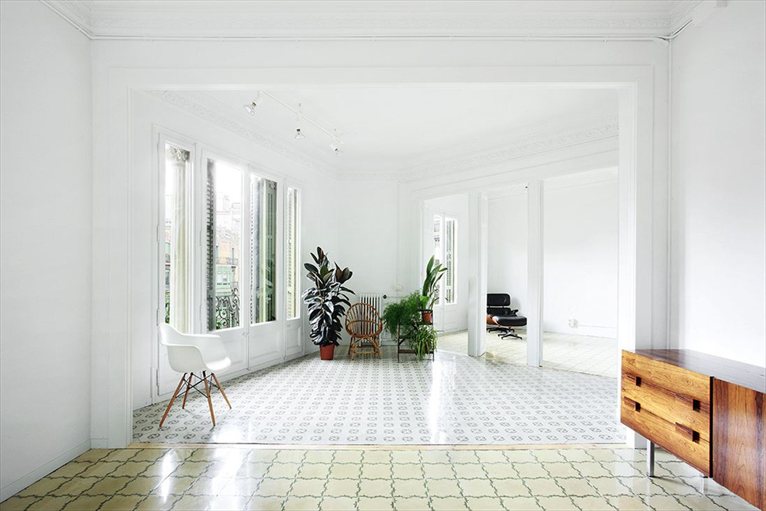 ARQUITECTURA-G's apartment renovation (Reforma de una Vivienda en El Ensanche barcelonés) is located in the Ensanche of Barcelona. The rooms were initially arranged in such a way that each one led into another through a two-leaf door. These communicating rooms opened onto a connecting corridor which split circulation into two.

This organisation was re-designed according to a more functional use of the spaces. The generous passage through the doors, which can be likened to a partitioning wall, allows the various “pieces” to be connected, multiplying the dimensions of a room up to a situation of absolute permeability when all the doors are open. The flexibility permitted by this distribution axis led to the designers deciding to keep it to house the kitchen and the bathroom.

The customer insisted that the service corridor be eliminated; an existing partition was rotated and it led to the creation of areas of functional 'ambiguity' ready to be defined by the user, which improved the visual permeability and improved the diagonals which interrupt the orthogonality of the plan. At the same time, the rotation of this mirror plane blurs the bathroom's inner division while reflecting its images to the adjoining rooms.

Beyond the size of the rooms, the door is the tool which expresses the apartment's versatility. There are no single leaf doors because they tend to be closed and all the existing double leaf ones are maintained, combined or relocated, playing on the dimensional relationship between the door and the wall's alignment in order to mistake one element with the other, and to emphasize that each room has a close relation to its adjoining ones.