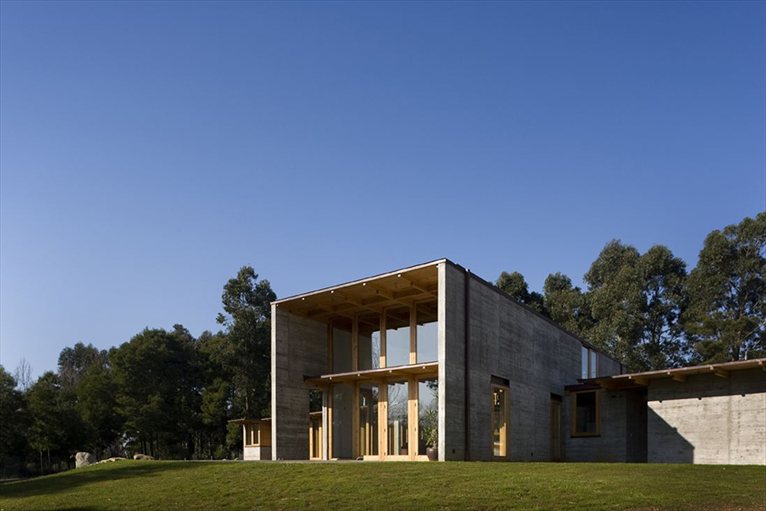 Castanheira & Bastai Arcquitectos' HOUSE IN MADALENA, a large house not far from Porto in Portugal on the Atlantic coast, offers the opportunity of reflecting on the work of an architect.

Not only (unfortunately) because their project retraces many elements of classical architecture, above all 1950's North American ones, but also because it is the result of a lot of toing and froing with institutions, permits, planning constraints, etc.

Fortunately, the House in Madalena has now been completed and bears witness to how architecture has the power to go beyond words, to go beyond the mere thoughts (and preoccupations) that underlie its creation. The bearing walls of the three volumes were created using rough concrete to avoid that Super-perfect Japanese feel where concrete almost ceases to be concrete and they are connected with the other parts of the structure with natural wood.

The final appearance is that of a country cottage, which incorporates a relation with the country, rather than chasing it and aping local architecture. It is interesting to understand the path followed by the designers (maybe to give us heart, while trying to face up to the same problems).

First of all, the area where the house is located will soon see the construction of a motorway, which is being built to reduce vehicular traffic towards the coast. However, until now the area has been zoned as agricultural, although agriculture is almost non existent, except for a few small vegetable allotments.

However, in the attempt to reach a compromise, for a building which takes account of a space to be dedicated to small agricultural activity, there have been a series of problems and delays, misunderstandings and absurd requests, which makes you understand how often projects are a question of time, a waste of time! The world is the same wherever you go.