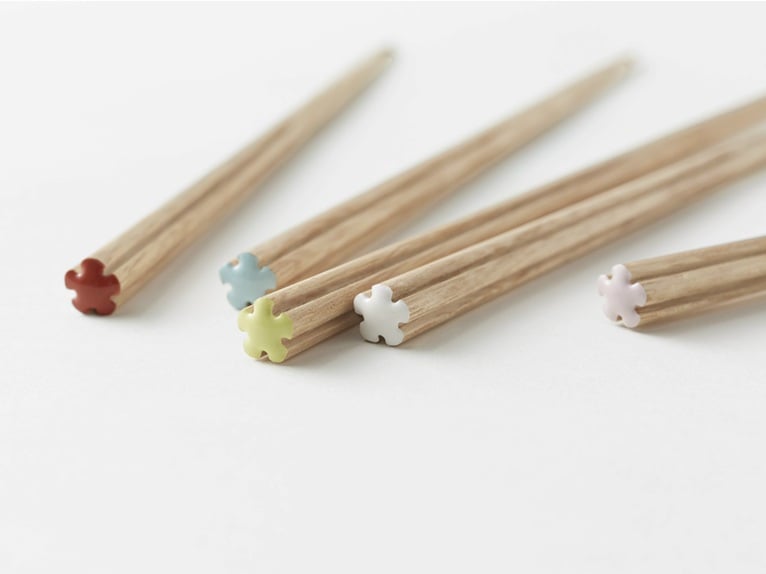 DESIGN_ For four centuries, the town of Obama in Fukui Prefecture, Japan, has manufactured lacquered chopsticks. Obama's lacquered chopsticks have been recognized as the hardest and most beautiful of Japanese lacquer chopsticks since the seventeenth century, when they became known as 'Wakasa-nuri'. Nendo designed new chopsticks in collaboration with Hashikura Matsukan, a manufacturer who continues Obama's traditional manufacturing techniques today. 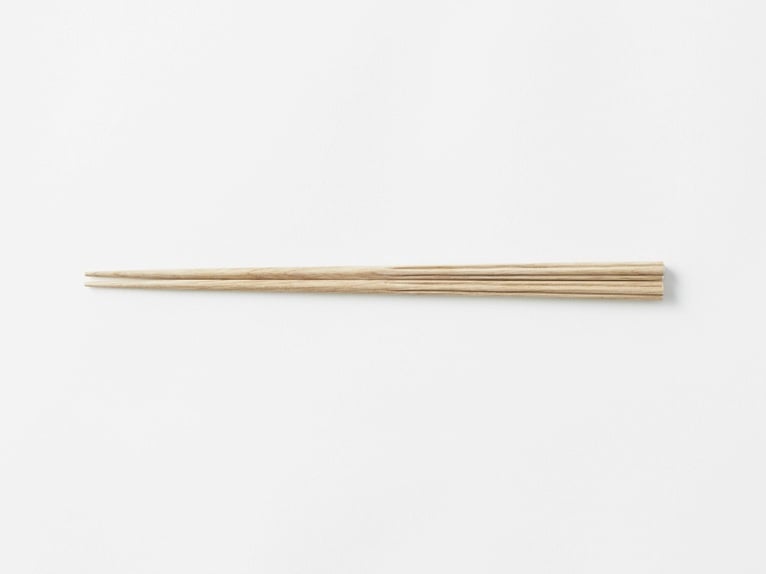 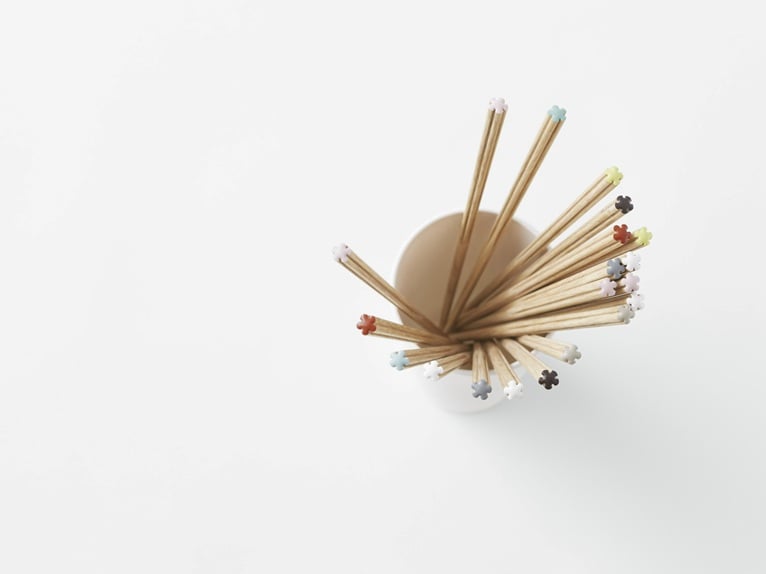 Round chopsticks are slippery to use, but overly square-cornered ones aren't as comfortable to hold. We explored ways of increasing the surface area of chopsticks in the hand, as a way of improving holding comfort, and discovered the natural form of the pleated cross-section. When viewed as a cross-section, the chopsticks look like flowers, so a bunch of chopsticks kept together into a cup turns into a 'bouquet'. 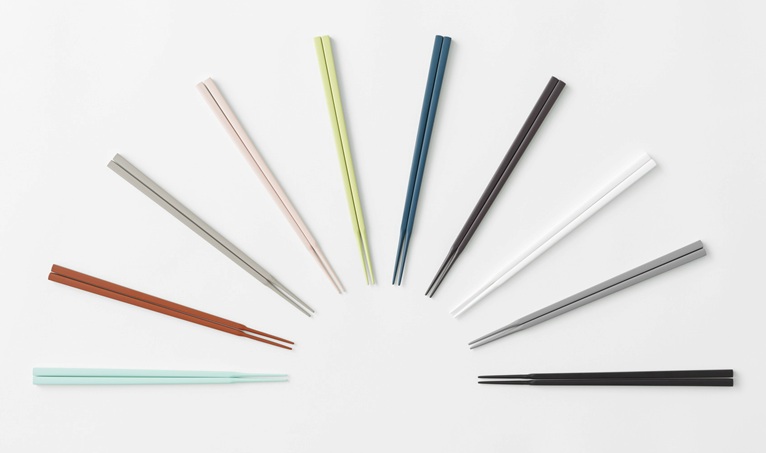 The firm's expert artisans carefully carved away the chopsticks' tips to fine points, so that they float above the tabletop when the chopsticks are laid down for cleanliness, even without chopstick rests. 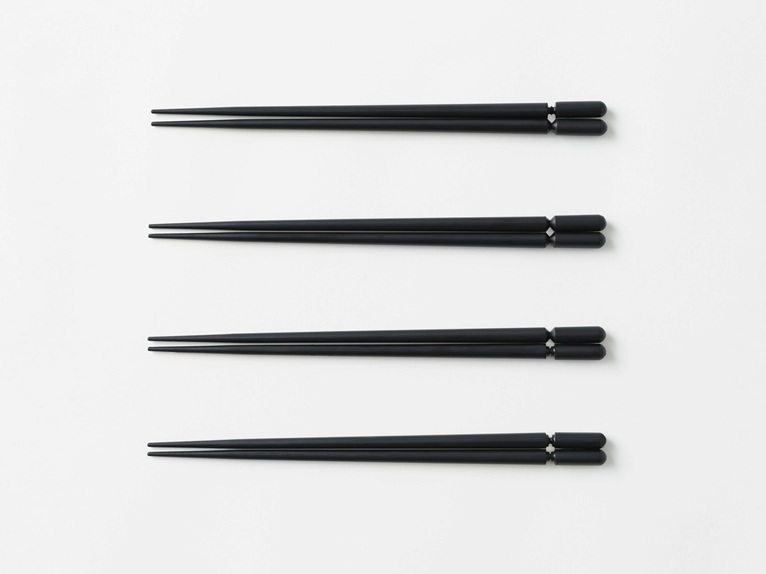 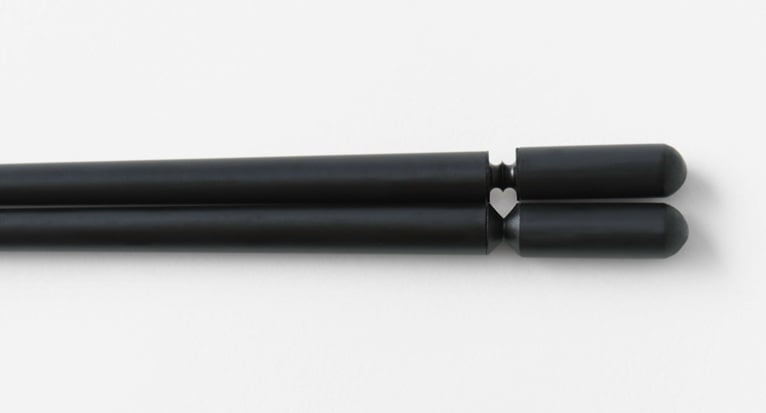 The world is full of patterned chopsticks, so we wondered if it wouldn't be possible to create pattern in the space between the chopsticks. We came up with four patterns: hearts, diamonds, clubs and spades. The two chopsticks are carved into different shapes for all patterns but the diamonds, but it's possible to use one of the diamond chopsticks as the top chopstick with a spade, or the bottom chopstick with a heart, for a total of four different patterns from the four different chopstick pairs. The carving made the chopsticks so thin that they weren't strong enough with wood alone, so we embedded a carved aluminum core in the wood to solve the problem. 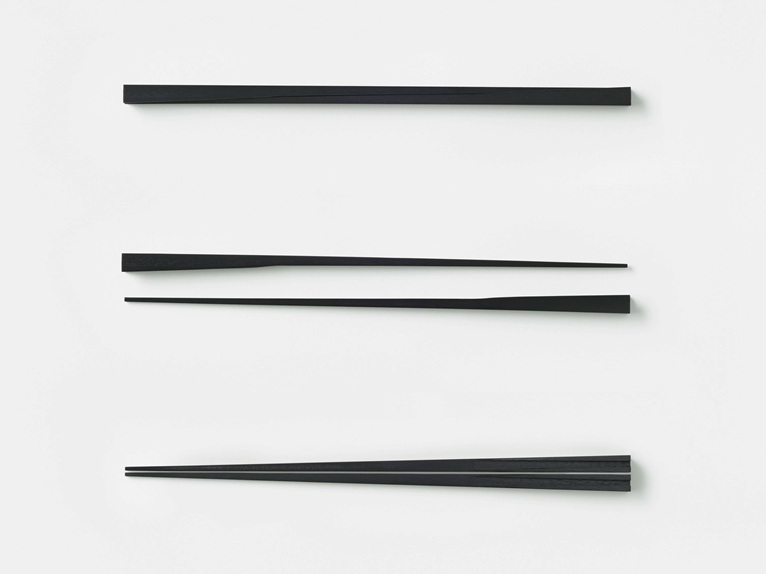 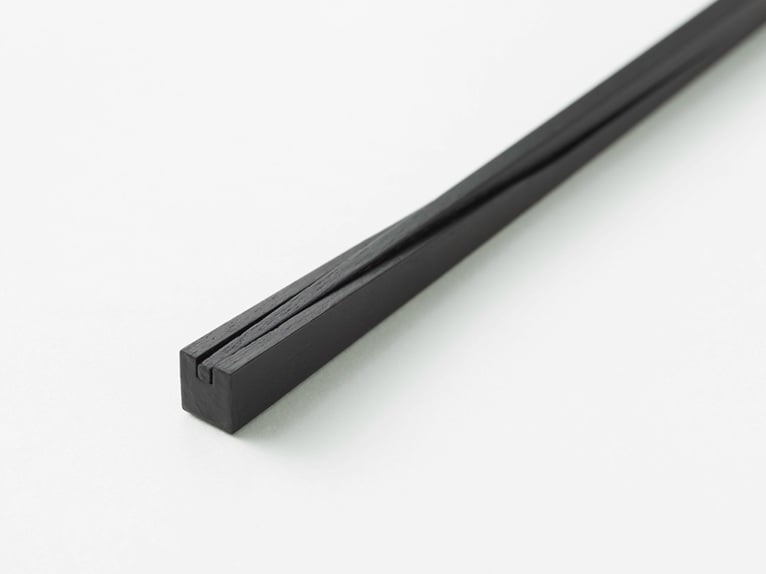 We put a gap on one of the four sides of the square shaped chopstick,and embedded a magnet, so that the two would snap together in one piece when they are flipped and fitted to each other. We placed the magnets towards the outside of each chopstick, so that the chopsticks don't come together accidentally while someone is using them to eat. 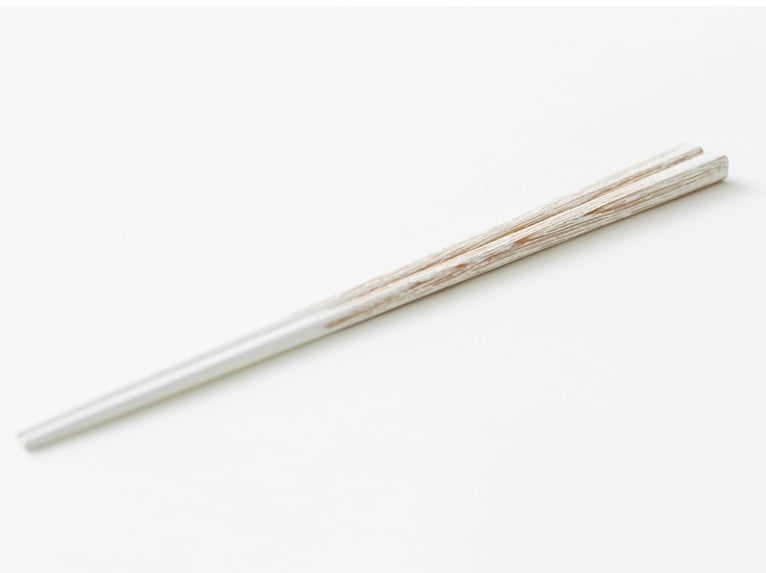 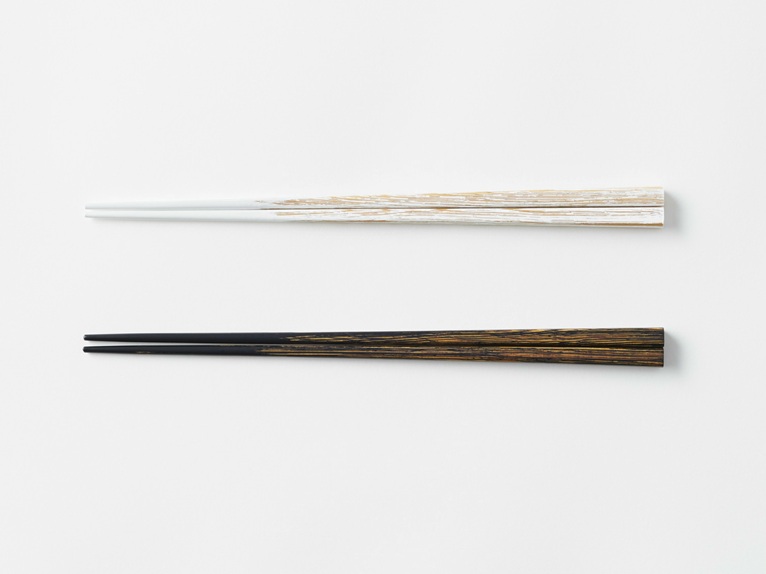 We used the udukuri process, in which the wood surface is carved away with a metal brush, leaving only the hard wood grain, then lacquered the chopsticks and polished them again to bring out the wood grain as pattern. The traditional technique, in which materials clamshells, eggshells and gold leaf are applied with the lacquer then polished away to reveal a pattern is known as 'togidashi' (literally 'to polish and show'), and is particular to Wakasa-nuri. Unlike patterns drawn by hand, this combination of processes allows patterns from nature to appear organically. 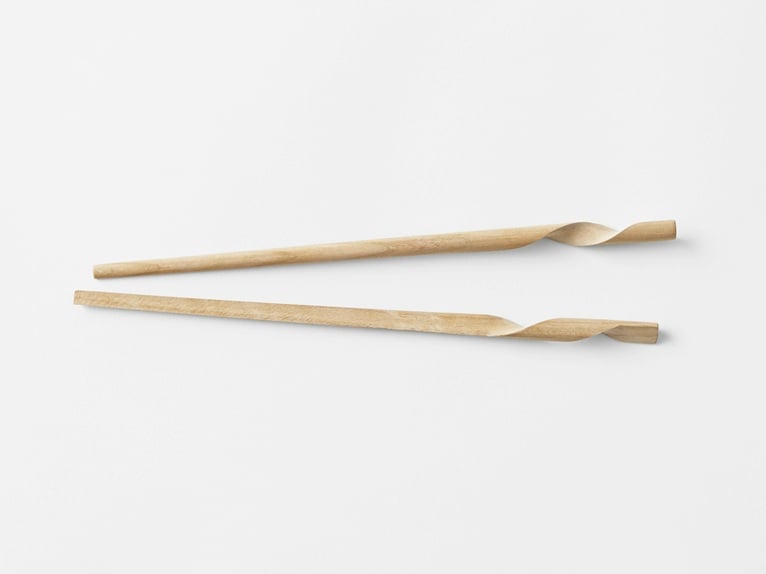 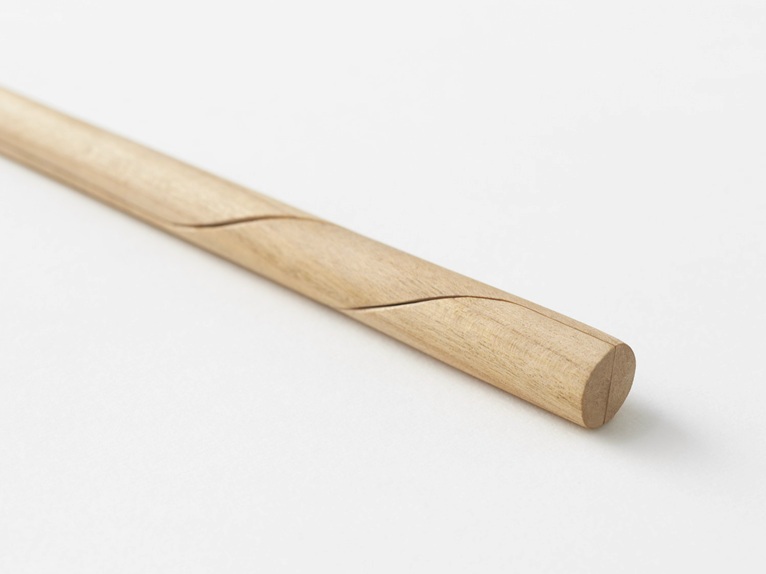 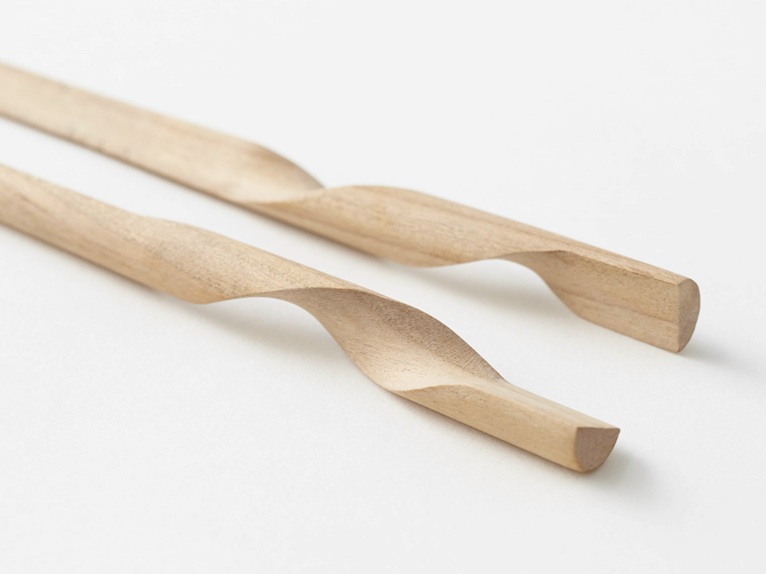 Chopsticks ordinarily come in pairs, but the rassen chopsticks are a single unit. They're separated into two for eating, then rejoined into one form when not in use. We used the artisans' hand skills and a multi-axis CNC miller to create these unusual chopsticks.