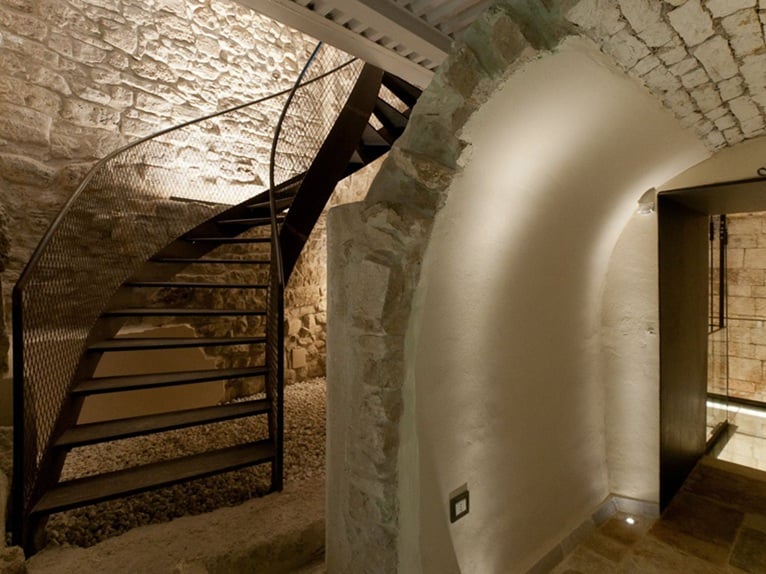 The restoration of Palazzo Calò in the old city centre of Bari was carried out by the young architects from Bari esseelle associati | studio di architettura who converted it into a hotel. “As always happens when you approach a historic building, this project was more one of listening rather than talking” say the designers. 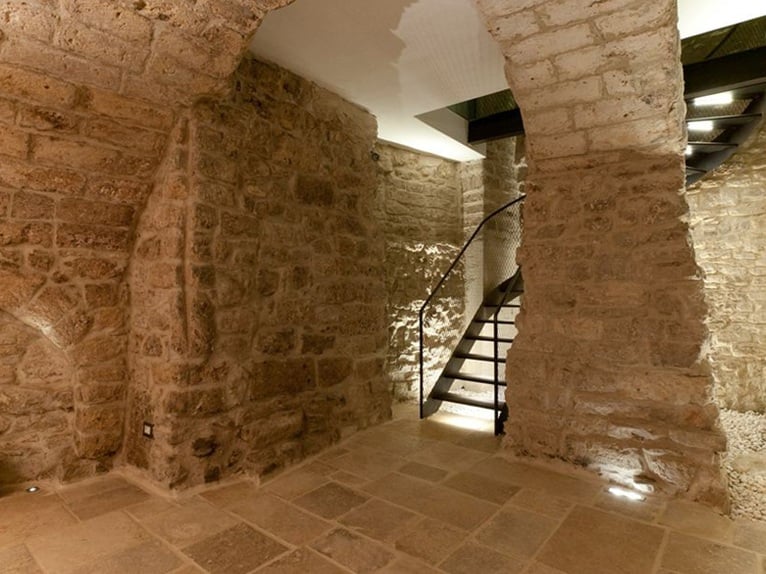 “It is not a simple 'respect for history' as a pretext for inaction, or worse still for not assigning value to contemporary contribution when it interacts with the pre-existing. It is rather the changing project-context relationship: it is easier to realize the operational limits, of the environment to move in.” 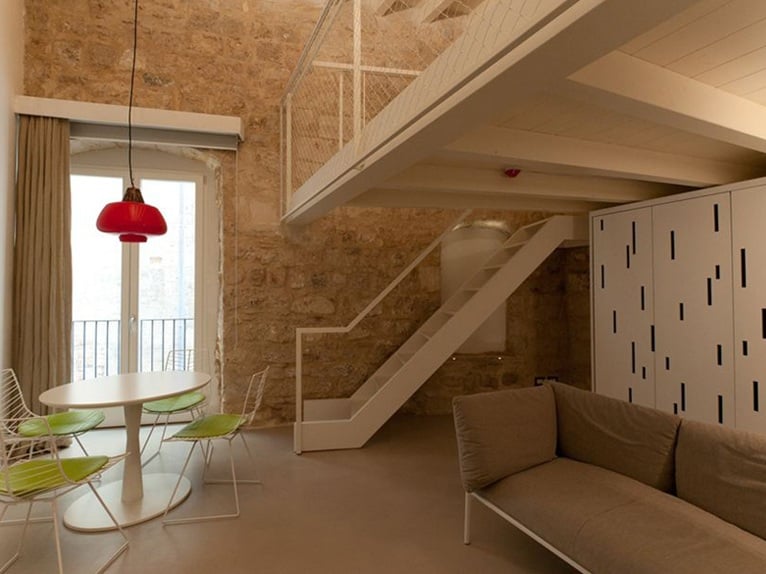 Palazzo Calò, built during the 1500's through the fusion of pre-existing tower buildings, has come to us with a natural succession of subsequent alterations. The progressive refinement of the functional program has undergone sudden changes of direction with the succession of discoveries during excavations that have brought to light a barn and a tank in the basement. 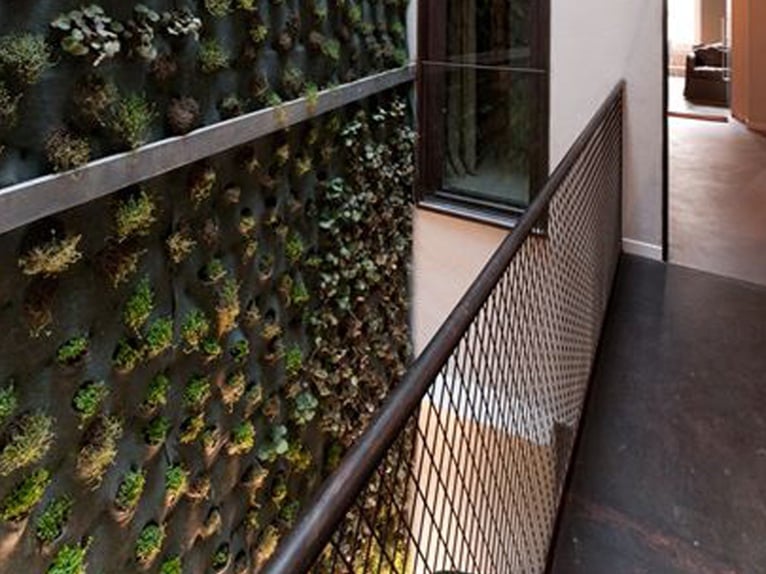 Ten suites are distributed on the first and second floor. The element that unites them is the white wooden mezzanine with white mesh railings, the custom furniture which hides the retractable mini kitchens and all the other elements that characterize the individual units: materials, furniture, colours are customized for each environment by taking into account the exposure, the presence of more or less marked traces of stonework, arches and niches, or the presence of original wooden floors that it was possible to recover in some areas. The hardwood floors are interspersed with resin ones, with contemporary furnishings that interact with pieces recovered from different periods. 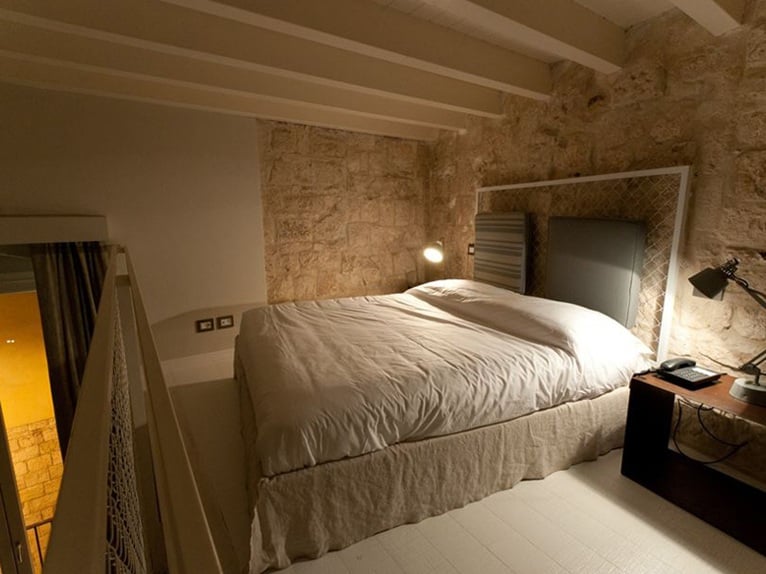 In the common areas it has been chosen to reduce the formal and material options as far as possible, in a dialogue that leads the existing spatiality to size up with the stairs and walkways in cor-ten steel and glass: the lightness of the suspended walkway crossing the tank in the basement, for example, allows a perception of the walls and of the unexpectedly high vault, introducing the visitor to the small space of the ancient barn where the services have been located. 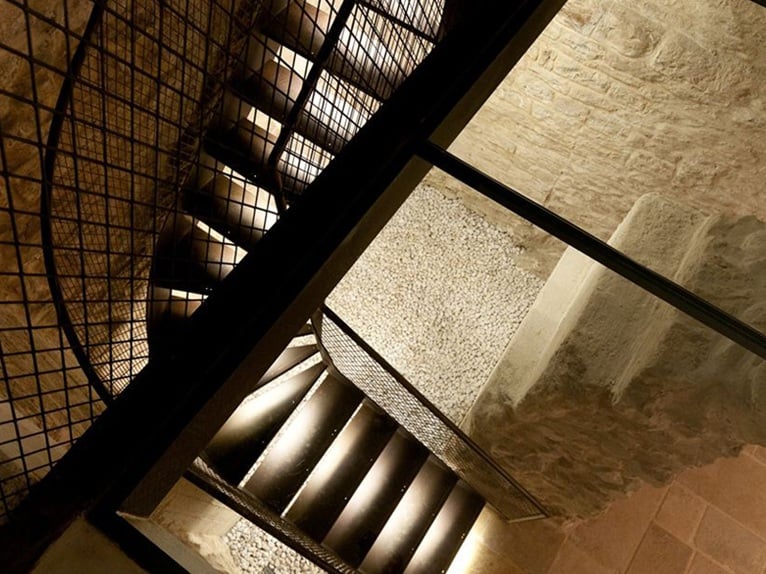 The formal independence of the layers allows new visions, the result of formal dialogue between very different elements, to be built. A small shaft of light penetrates to the centre of the building. Its original nature of open space is recalled and redefined through a green vertical wall which can be seen from the conversation areas on the ground floor and the rooms that face inwards. The staircase is also made of cor-ten steel and expanded metal. In this case, the path that starts from the ground and goes through the small space for the vertical connection, ends on the building's roof which is available for guests of the hotel. It has a panoramic terrace from which to enjoy the alternation of roofs, towers, domes and bell towers.