STREETART_ For the first time in Italy there is the activation of crowdfunding to finance the work of public art of street art: the murals by Sten & Lex in via Caffaro, Rome.

The Outdoor, the first festival of Urban Art in Rome, since 4 years encourages artists from around the world to leave a mark and offer a different interpretation of the public space. Supporters can donate from 5 up to 505 Euros in exchange for limited edition serigraphs.

«The greatest human invention? The city of course» writes Edward Glaeser, Professor of economics at Harvard, in his famous essay The Triumph of the City. The city as a center for the production of new thought and cradle of physical, economic and cultural miracles. 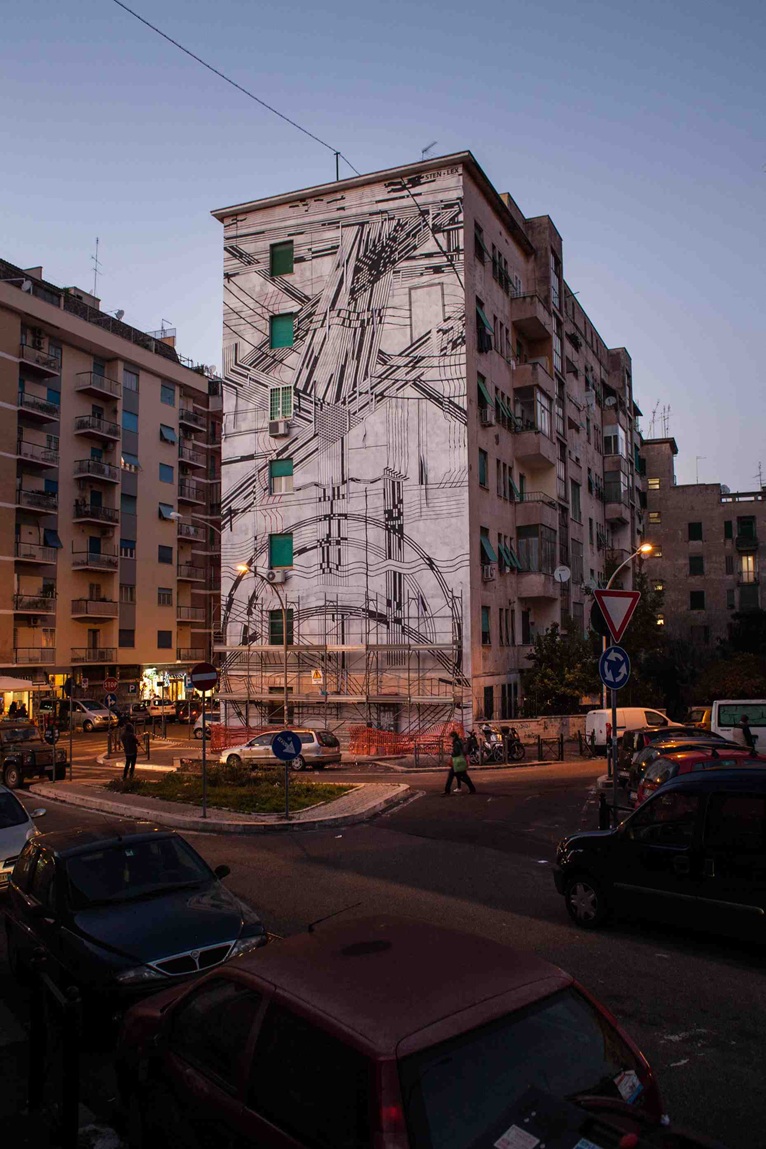 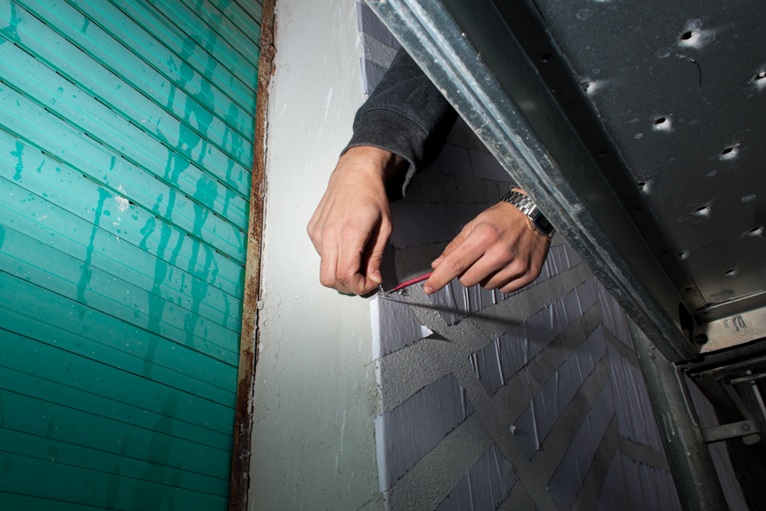 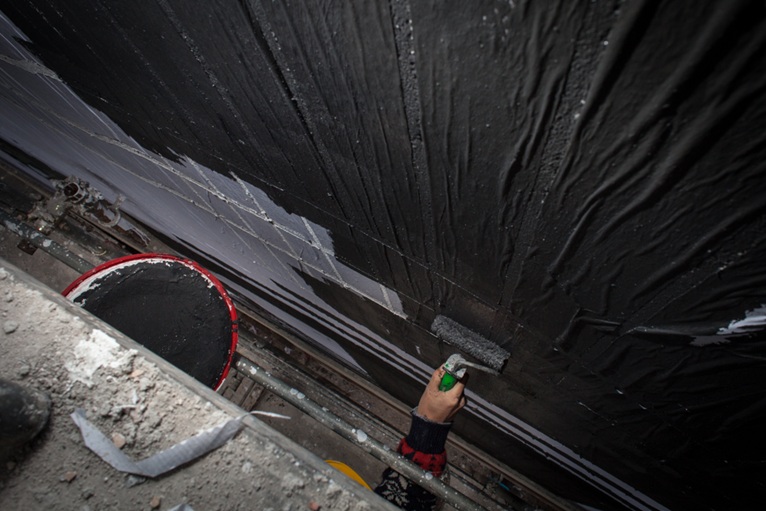 A “dream team” of artists for the fourth edition of Outdoor, which has deeply changed the city's outlook, putting art at the center of this urban transformation. Outdoor 2013 presents itself as a platform in which urban art can be shown in its different facets: post-graffiti, street art, photography, architecture and cinema. This installment concludes a 4 year “journey”, which affected every wall and surface in the transformation of the VII District, which now stands in the international maps of Urban Art.

Since 2010, the festival has hosted the biggest names of international street art like L’ATLAS, C215, Sten & Lex, J B Rock, Herbert Baglione, Kid Acne, Agostino Iacurci, Momo, Zedz, Borondo and Sam3, thanks also to the efforts of the Institutions, privates and citizens who contributed to the process towards the cultural change of the city of Rome.

Thanks to Outdoor IV, architecture and cinema join together to tell from their perspective the change the city has embraced and the excitement characterizing it, bringing to light the problems and peculiarities it implies. 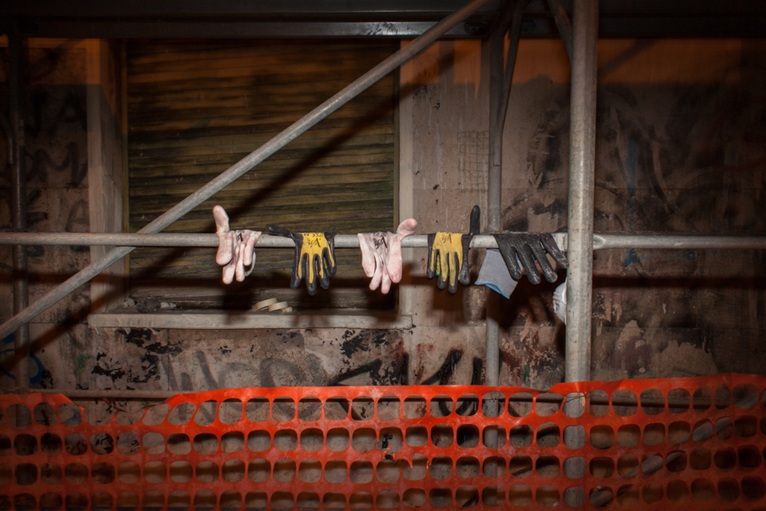 Sten&Lex are among the pioneers of the ‘stencil graffiti’ art in Italy. The started their activity in 2001 in Rome . The subjects of the first stencils are B-movies' icons such as Bruce Lee, Columbo, Dirty Harry. In a short time their research leads the to representation of anonymous faces taken from the American College Yearbooks from the 60es and 70es.

A move that tries to shake off the Pop ‘aura’ of their origins and retrieve anonymous faces avoiding the repetition that features the stencil technique . In fact the same stencil is never repeated twice, thus creating a paradox based on the concept of never repeating the same matrix, whose nature is the one of an endless duplication. Prints and engraving constitute a parallel strand: Sten&Lex take details of stamps, bills and old pictures, like Gustavo Doré's drawings, making them monumental by painting on large format posters, 3-4 meters high.

The stencil technique comes from the engraving technique and for this reason the study of the printing art of the past was and remain a basic issue of their job, with a frequent use of sacred and ecclesiastical elements . The tone is not irreverent thou, but is related to a recovery of classical art proposed in a subjective formality by the two artists.

They have become internationally renowned thanks to their introduction of the “mezza-tinta” (half-tone) in the stencil technique: the stencils are based on dots, lines and pixels that compose a complete image and can be read depending on the distance from which you look at them: by being very close it seems quite abstract , while it becomes realistic from a certain distance. This technique has been defined by the artists themselves as HOLE SCHOOL.

The works that they are presenting are personal portraits and the use of the ‘Half-tone’ makes them looking as ancient printings and engravings . 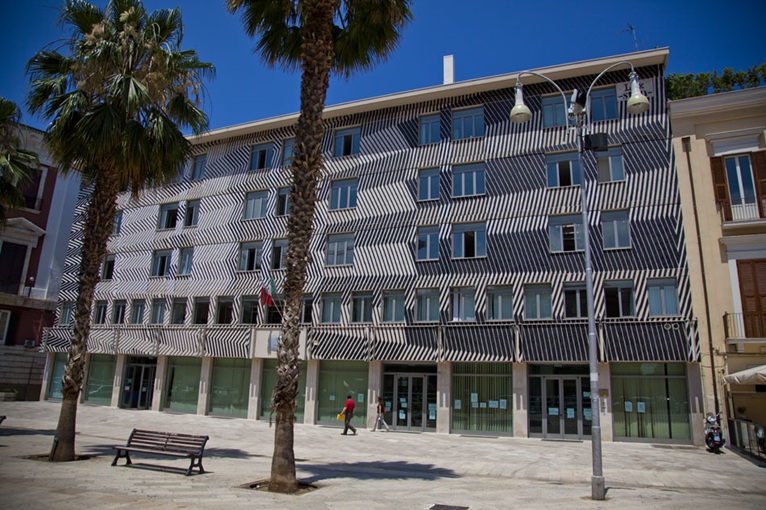 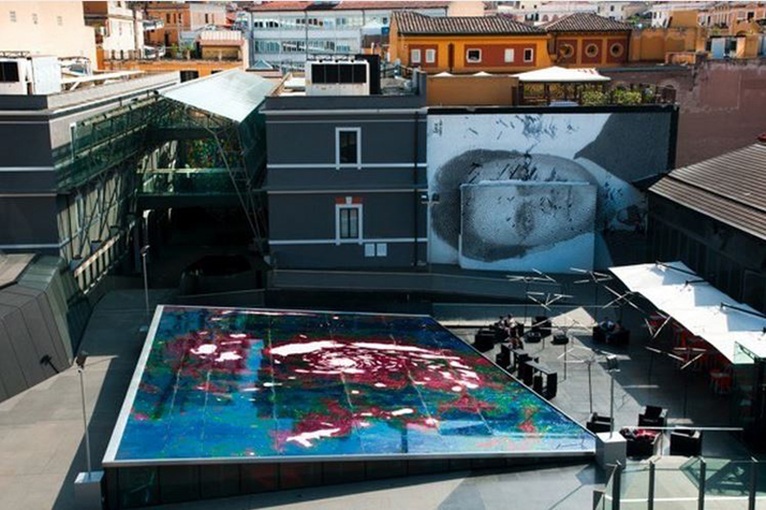 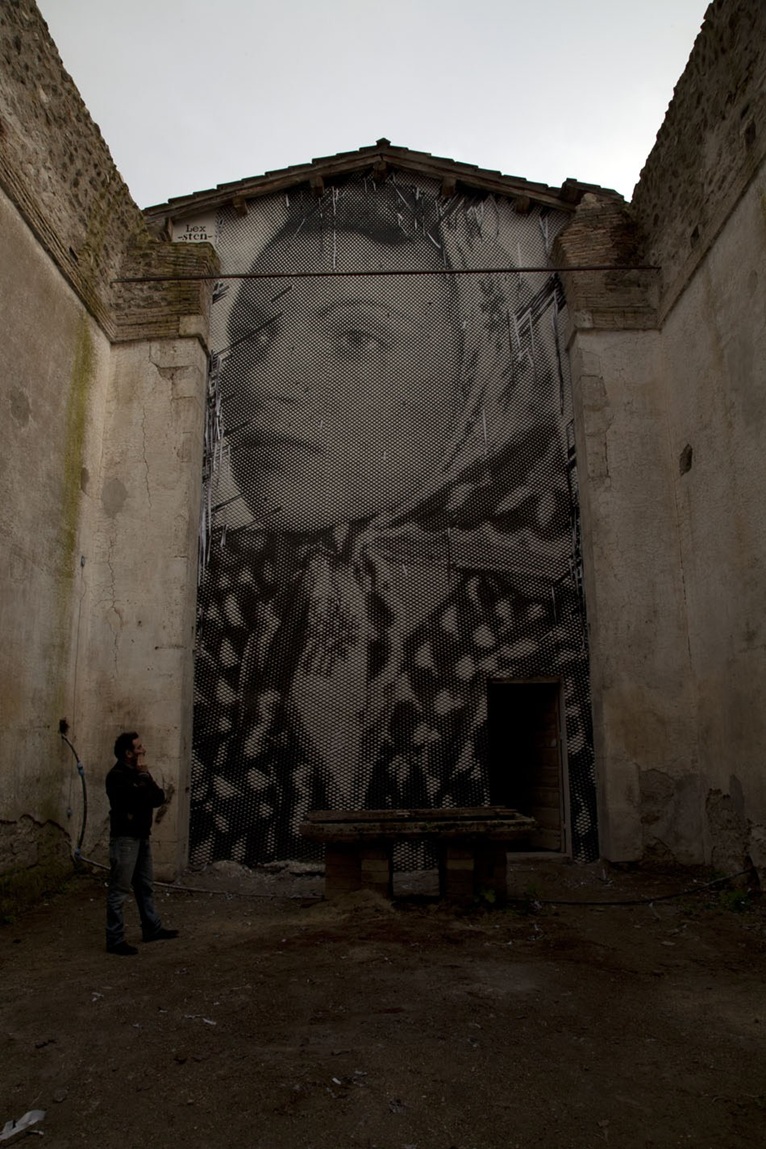 THE CHURCH † – CONVENT of MENTANA 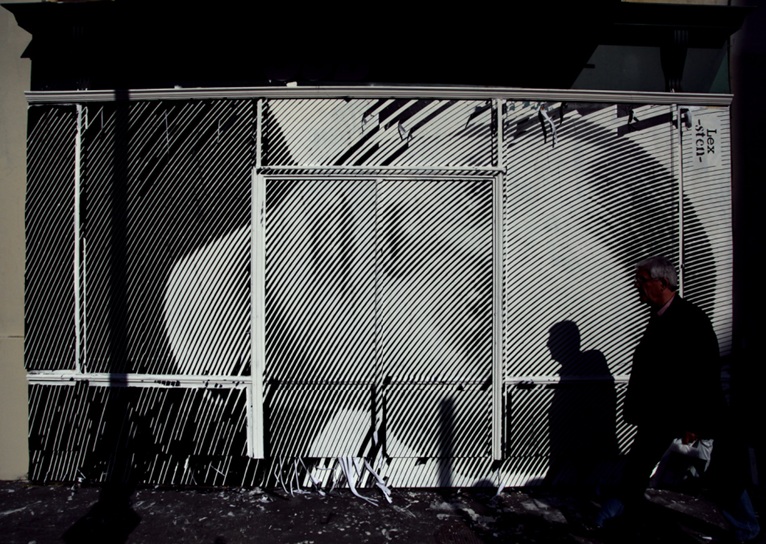 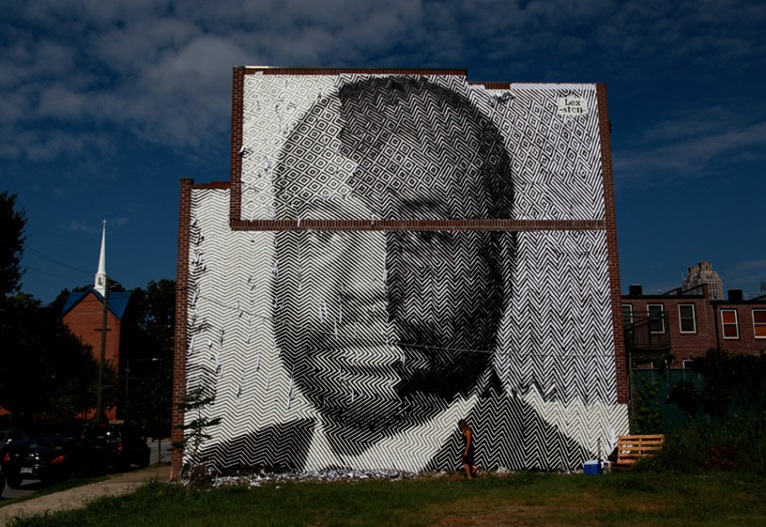 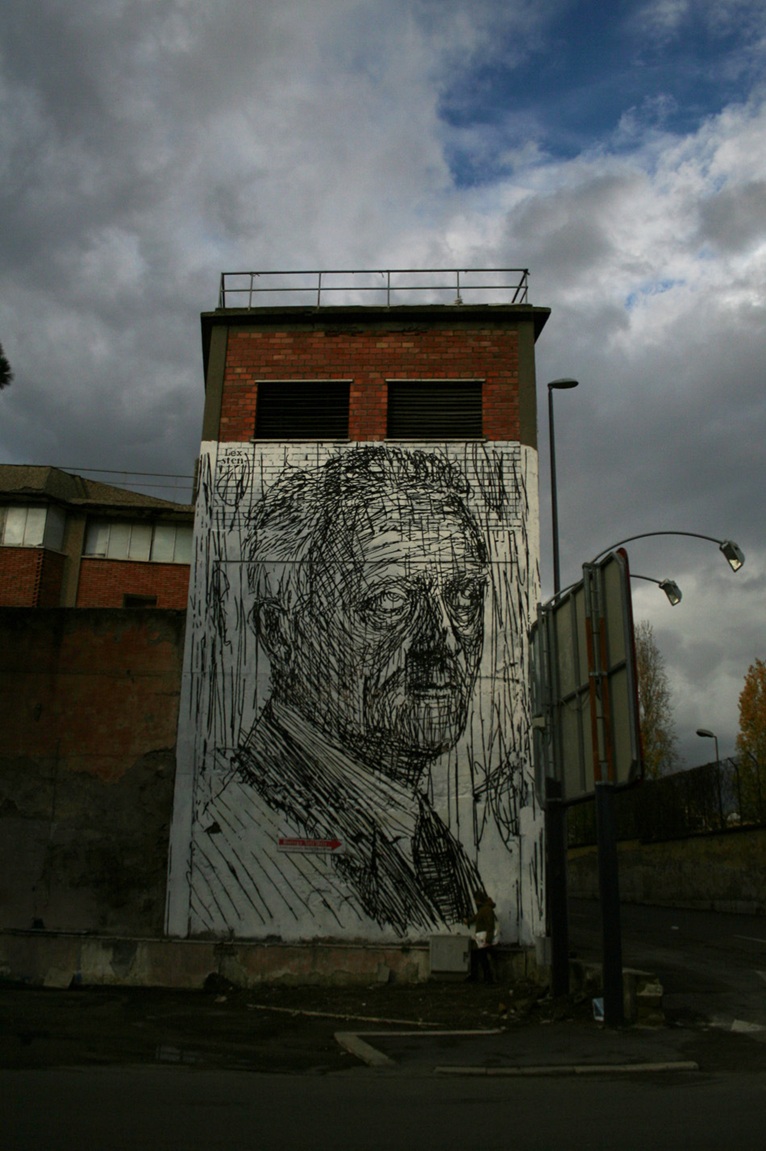