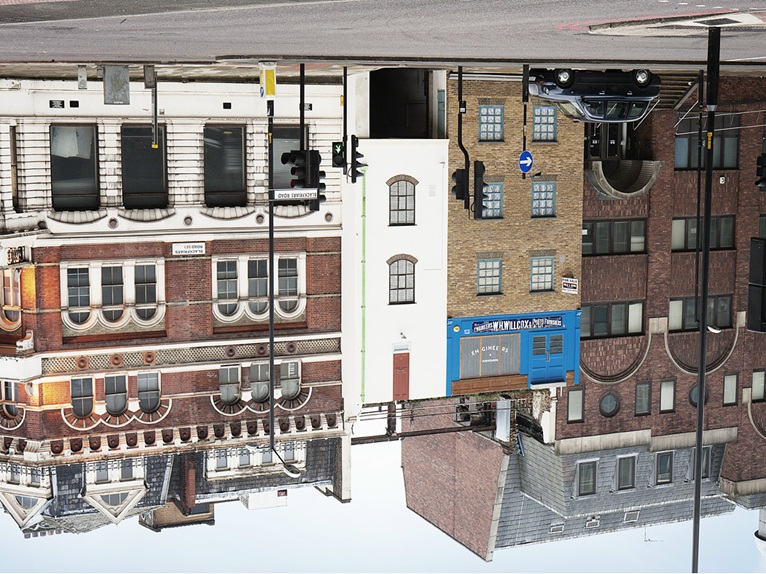 INSTALLATION_ British artist and designer Alex Chinneck created a new outstanding outdoor artwork in London. ‘Miner on the moon’ is located just south of Blackfriars Bridge in London at 20 Blackfriars Road SE1 8NY and was produced as the finale to Merge Festival 2013. Built in 1780, the site was originally used as livery stables housing horses and carriages for hire. The access through the site (the underpass to the bottom right of the building) was used to ferry live cattle from the rear yard to the Thames for trade. 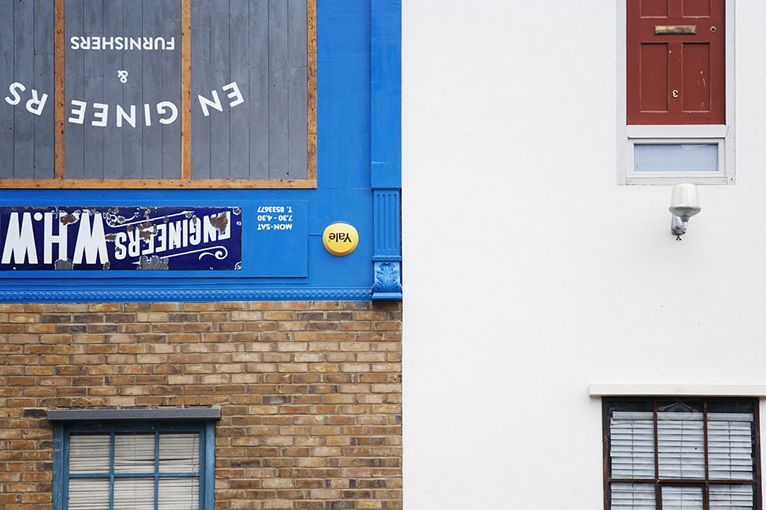 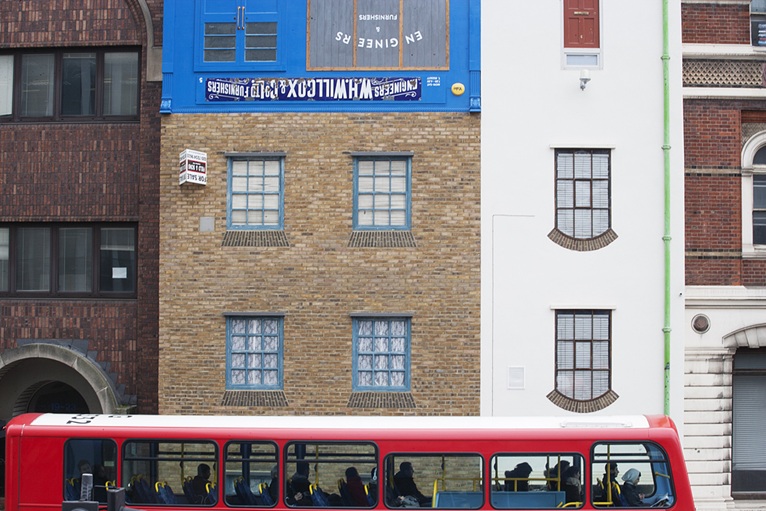 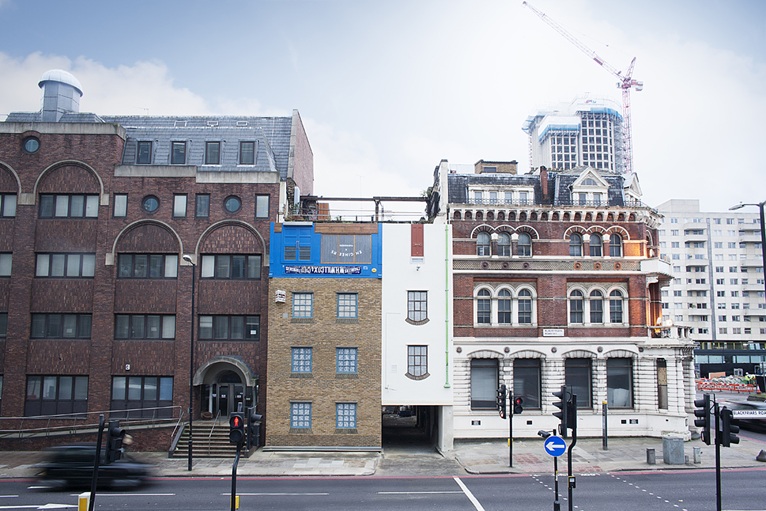 "I was interested by how the architectural silhouette of the building had been created with this function in mind and I wanted to conceive a concept that responded to this shape and the buildings history. The material and aesthetic decisions within the project celebrate the architectural heritage of Southwark and the timeless charm of its fatigued buildings."

By presenting a very familiar architectural scenery and narrative in an inverted way, the audience hopefully re-appreciates the buildings and moments of their daily environments that they allow to slip into our subconscious. The sign (W. H. Willcox & Co Ltd) is a company founded in 1876 on Southwark Street a few minutes walk from the site.

"After being dissolved in 1986, I found their enamel signage earlier this year in a reclamation yard in Wales and this sign initiated and informed the mood of the work. As an artist, this very busy junction is of course prime real estate for public sculpture given the volume of traffic and potential audience. Having said that, I’m conscious that when a person walks through the doors of an art gallery they do so through choice but people do not make that choice when presented with public sculpture."

He wanted to create an artwork therefore that offered spectacle but was simultaneously subtle and by using the material and architectural language of the district the artwork has the ability to disappear into its environment without dominating it.

"We built the entire structure off the existing building. This involved the erection of a scaffold bolted to the original facade. Onto this scaffold we installed a grid using 800 metres of timber, which was then clad in a combination of Norbord OSB and Euroform Concrete Particle Board. On the side of the facade featuring brickwork we then installed an insulation/cladding system manufactured by Eurobrick, which was then clad in 30mm Ibstock brick slips and pointed. On the right we installed polystyrene panels from Kingspan, which was rendered in a K-Rend acrylic render system to avoid cracking from movement. The bricks were sealed so that no water penetrates their surface because the bricks used double in weight when wet." 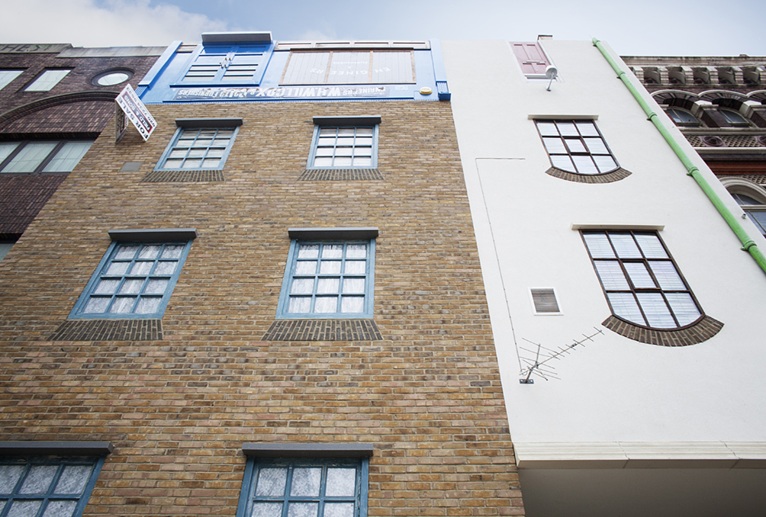 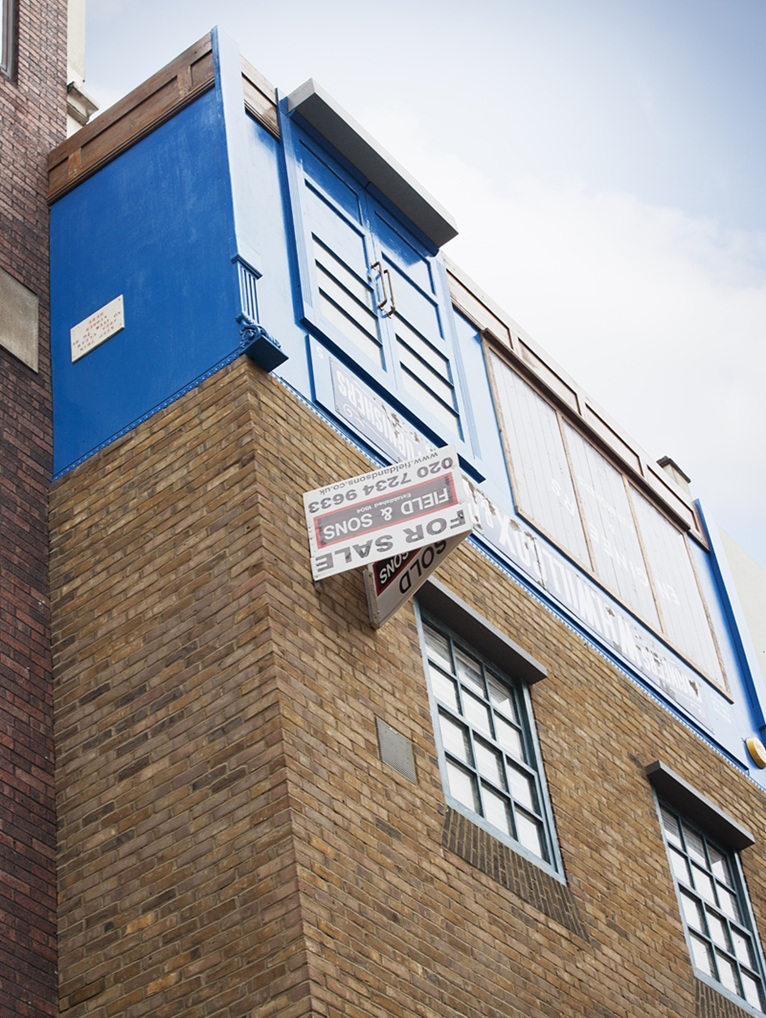 The architectural features were salvaged except for the windows. These were made from laminations of water-cut wbp plywood and polycarbonate to keep the weight down. The rusting arched windows are also plywood treated with resin mixed with iron filings. The project was built in partnership Mace Group. Other supporters and sponsors include Tate, Better Bankside, Ibstock Brick, Norbord, Euroform, Eurobrick, K-Rend, Kingspan, Lyons Annoot, Benchmark Scaffolding, Dhesi and Urban Surface Protection. 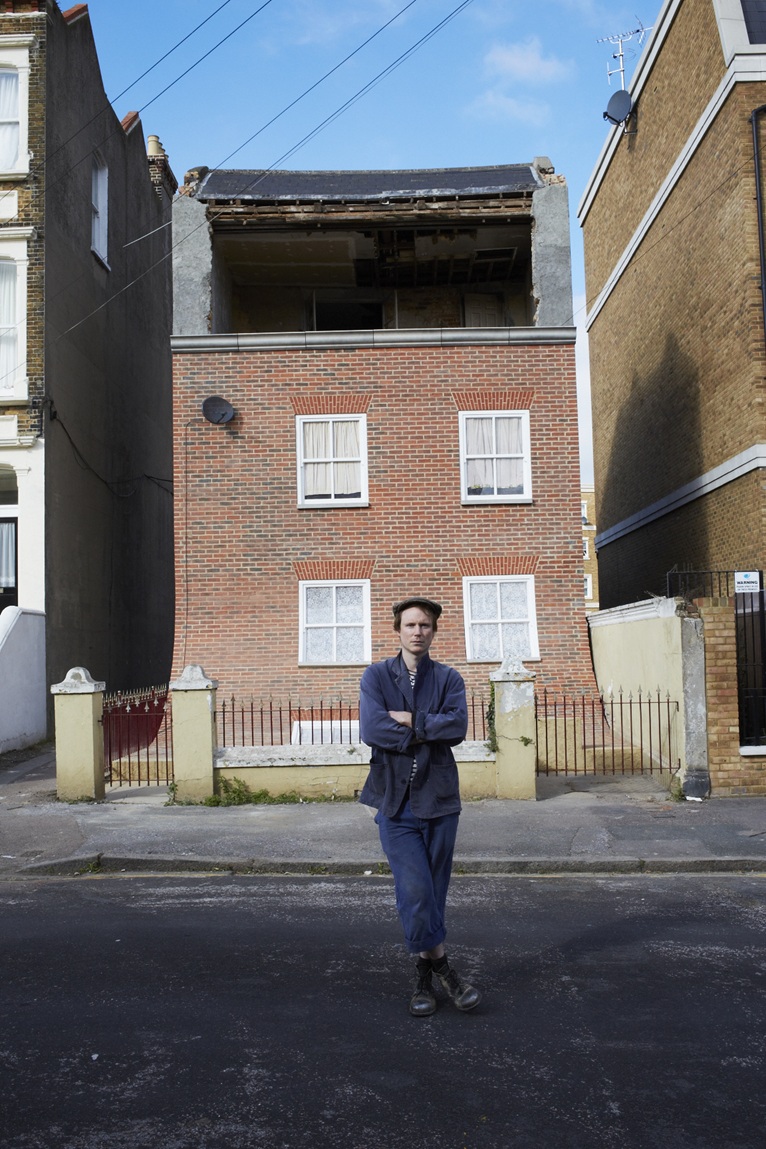 We already heard about Alex Chinneck for the artwork "From the knees of my nose to the belly of my toes", his most ambitious installation to date: curving bricks, windows and doors slide into the front garden of a property that has been vacant for eleven years its upper interiors are revealed to the public below. 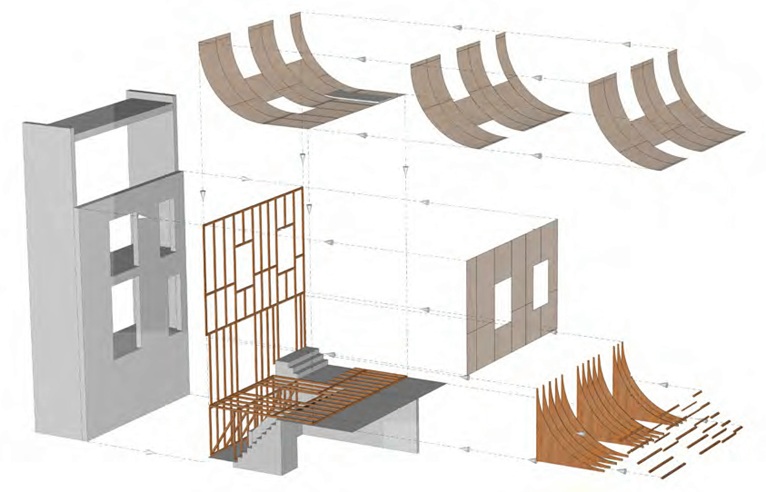 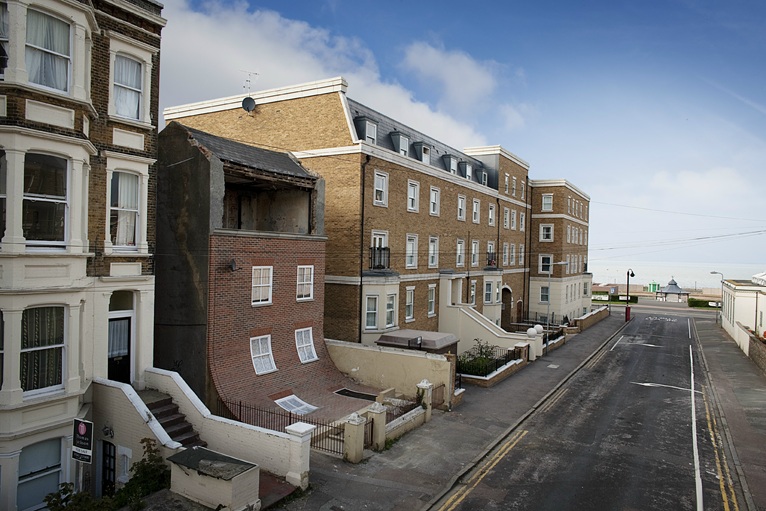 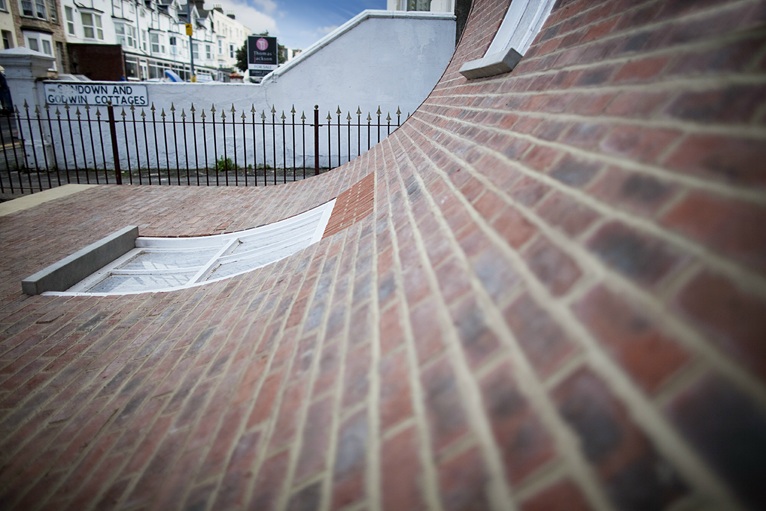 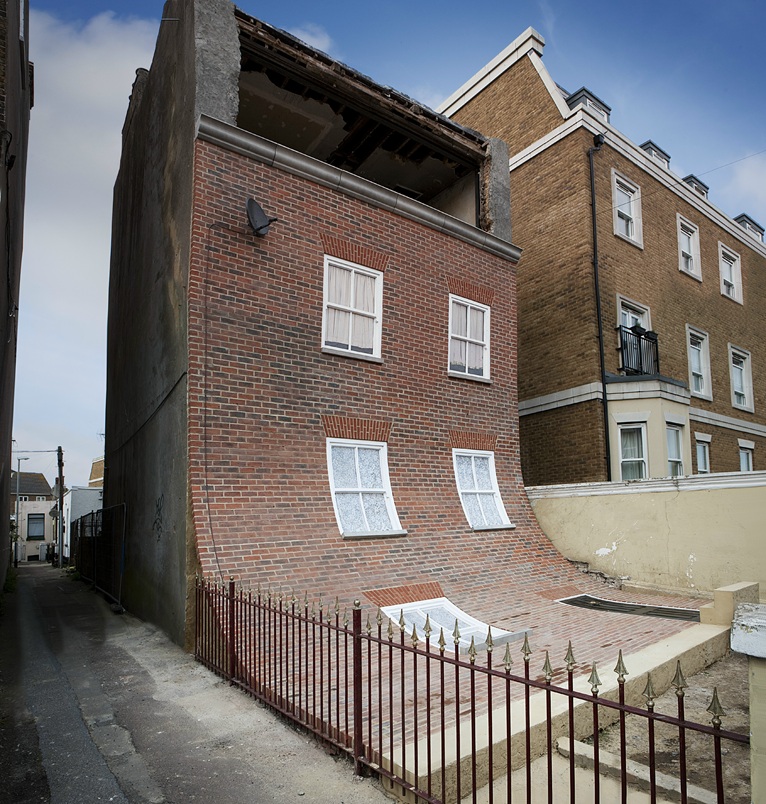 Alex Chinneck is a London based artist and designer: www.alexchinneck.com. He is the founder of The Sculpture House: www.thesculpturehouse.co.uk, a member of the Royal British Society of Sculptors and a graduate of Chelsea College of Art and Design.