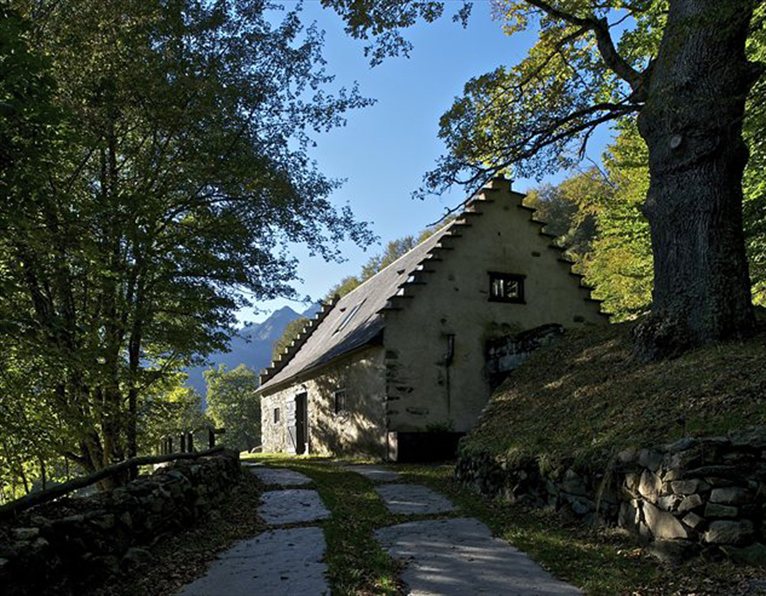 French architects Puig Pujol Architectures have designed the Extension of a barn in Pyrenees, for which they received the prestigious Prix d'Architecture Midi Pyrénées 2012 award.

The project is set in a beautiful backdrop, in the lush green valley where the river Adour de Lesponne flows on the French side of the Pyrenees. The site housed a stone building which was originally used as a barn and a stable but was converted into a holiday home with great respect for the local culture and for its rural setting.

The extension of this holiday home envisaged creating new living areas, a guest room and a multi purpose room as well as a utility room and garage. The project opposes the strong presence of the barn by providing a discreet 'topographical feature' resting against the incline of the hillside.

The architects' desire was, on the one hand to, reduce the powerful presence of the barn in the landscape, while retaining an architecture with its own well distinguished personality.

The rigorous and rhythmic structure of the Corten partitions protect the extensive glazed wall of the façade which house the log store and imply the transformation of the architecture in time and with the seasons.

The new area is extrovert, it opens to the majestic views over the mountains, while remaining covered and almost hidden by its green roof which forms a continuation of the slope, broken only by a strip of rooflights and the chimney. The interior is basic yet cosy, although it is embellished by traditional elements including the use of stone and wood, as well as the traditional cast iron wood-fired stove.