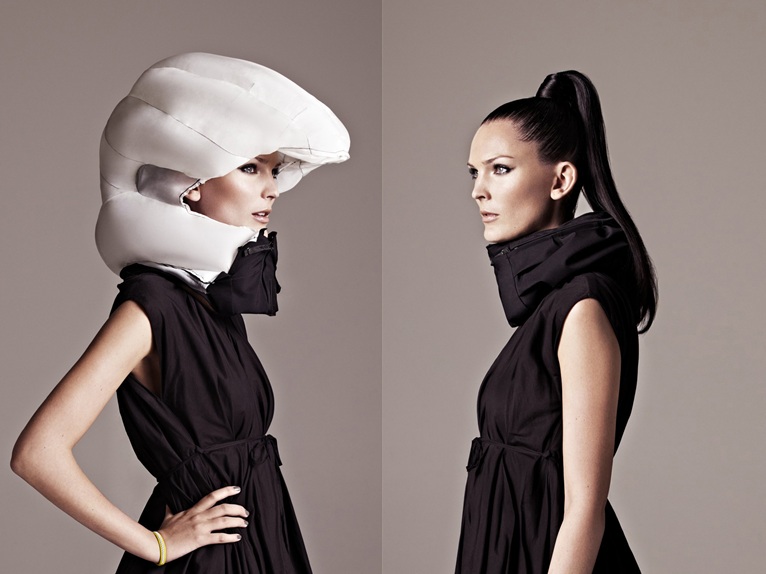 UTILITY_ Hövding is the smart invention that came out of the brilliant minds of two Swedish designers Anna Haupt and Terese Alstin. It started out in 2005 as a master’s thesis by the two founders who, at the time, were studying Industrial Design at the University of Lund.

The idea of developing a new type of cycle helmet was a response to the introduction of a law on mandatory helmet use for children up to the age of 15 in Sweden, which triggered a debate on whether cycle helmets should be mandatory for adults too. Anna and Terese saw their master’s thesis as an opportunity to find out whether it would be possible to develop a cycle helmet that people would be happy to wear – whether they had to or not.

The project resulted in the concept of an airbag helmet, which won Innovationsbron’s Ideas Grant. This kick-started the process of developing Hövding into a real product. In 2006 Hövding won the Venture Cup, after which Hövding Sweden AB was founded.

Today Hövding consists of 17 people, each with their own unique expertise, different backgrounds and personalities, inspired by each other and working closely together. We all see the impossible as a trigger and curiousity as a virtue.

"To people like us, who wouldn’t be seen dead in a polystyrene helmet, the thought that we might be forced to wear one by law was cause for concern. Producing a bicycle helmet that people would be happy to put on looked like a much better way to go than legislation forcing people to wear one or else. We realised that our industrial design master’s thesis was the perfect place to find out whether the traditional bicycle helmet could be improved on." 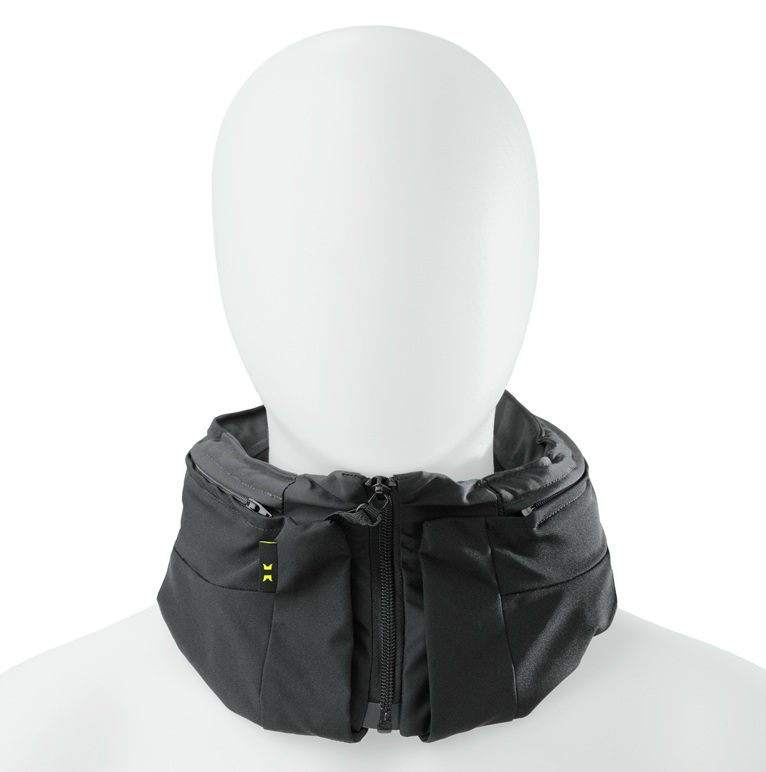 They started out with a survey, asking people on the streets why so few people wear bicycle helmets. They came up with plenty of reasons: “They’re a pain to carry about, they all look hideous, they ruin your hair, nobody else wears them, you can’t get your hat on underneath.” Some good arguments, it’s true, others more like excuses. It was clear that bicycle helmets are a hot topic that everyone has an opinion on and strong feelings about. Cycling is something we do every day and there’s a sense of freedom that goes with it. Although people are well aware of the risks on the roads, the vast majority are choosing to cycle without a helmet. When it comes down to it, people do really want to protect their heads in road accidents, but there are limits. It isn’t the cyclists who need to change, it’s the product. 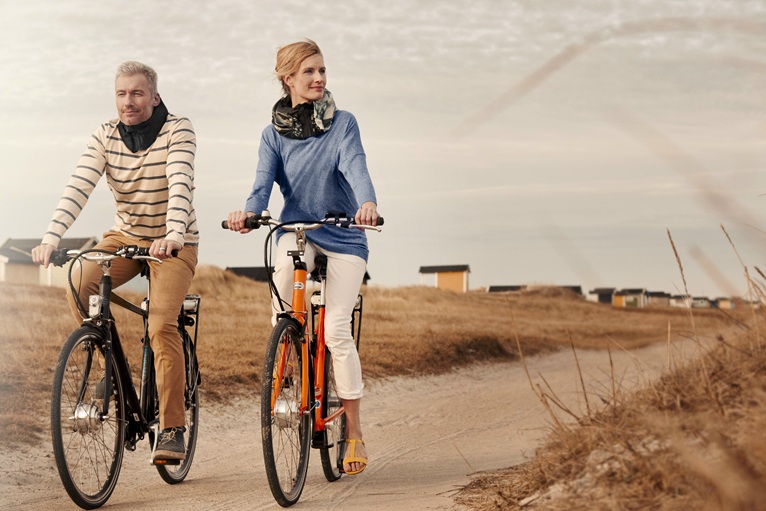 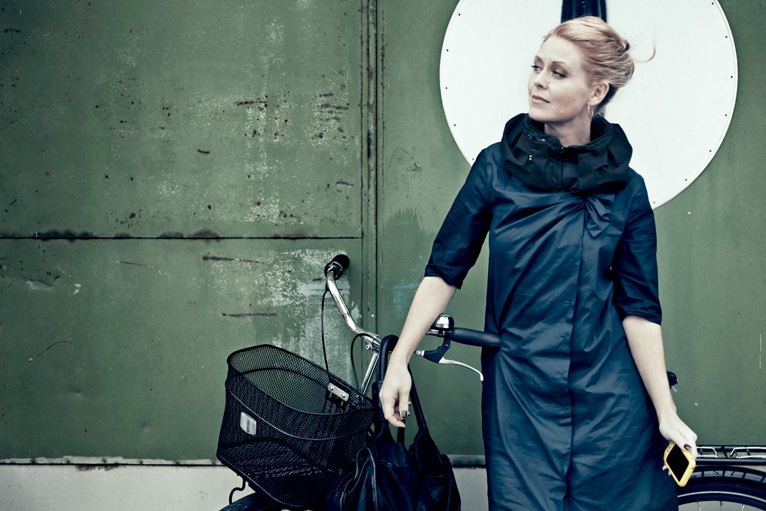 “Something that lets you change what it looks like, like you can with mobile phone skins or wigs”

Anna and Terese said "The instant  we heard the word “invisible”, we realised that was what the world was waiting for. An invisible bicycle helmet, that wouldn’t ruin your hair". Since that day we’ve learned that nothing is impossible. We’ve learned that people who call themselves “realists” are actually scaredy-cats who just aren’t brave enough to think big enough".

Hövding is the Swedish for “Chieftain” and their Hövding is a leader and a role model, with its sights set on changing the world. They want to encourage others to follow in their footsteps and dare to demand something better, to stand out from the crowd, and believe in themselves and their own capabilities. "We may be a small company but we think big and we aim high. Delusions of grandeur are exactly what it takes! "

HOW IT WORKS - Hövding is the result of an intensive research and development process that started in 2005. Throughout the years the company has developed a unique expertise in airbag helmet technology. Thousands of cycling accidents were re-enacted and compared to hundreds of hours of normal cycling with Hövding.

The unique airbag was developed in collaboration with airbag manufacturer Alva Sweden and extensive testing has been carried out to ensure the airbag provides the protection required. The development work around Hövding has resulted in a number of globally patented solutions.

THE AIRBAG SYSTEM - The airbag is designed like a hood and made in an ultra-strong nylon fabric that won’t rip when scraped against the ground. Hövding protects nearly all of the head, while leaving the field of vision open.

The inflated airbag covers a much larger area than a traditional cycle helmet and is designed according to current accident statistics. The protection is greatest where it is needed most and the airbag provides extremely soft and gentle shock absorption. The pressure remains constant for several seconds, making it able to withstand multiple head impacts during the same accident. After that the airbag slowly starts to deflate.
The gas inflator that inflates the airbag is placed in a holder in the collar on the cyclist’s back. Hövding’s gas inflator is a so called cold gas inflator that uses helium.

SENSORS AND ALGORITHM  -  How Hövding tells the difference between biking and accidents:
Thousands of cycling accidents were re-enacted using stunt riders and crash-test dummies to collect the specific movement patterns of cyclists in accidents. In parallel, an equal amount of normal cycling data has been collected using test cyclists wearing Hövding in everyday cycling. Based on this collected data, we have developed an algorithm that can distinguish normal cycling from accidents. Normal cycling means all the situations and movements that usually happen in a cycling context, including running up and down steps, bending down to pick up keys, etc. In the highly unusual category of cycling accident where no measurable movement appears within the cyclist, i.e. if an object falls from above straight down on the cyclist’s head, Hövding will not react.

ON/OFF  - To put on your Hövding, place it around your neck and pull the zip up under your chin. The zip needs to be completely closed for the collar to work correctly. There is an on/off switch on the zip tag that activates Hövding when it’s attached to the right-hand side of the collar. Similarly, Hövding is turned off when you unclip the on/off button.
At the front of the collar there are LEDs showing the battery level and whether Hövding is on or off. On/off is also indicated by a sound signal. Hövding’s battery is easily charged through a computer using the USB cable included, when LEDs and a sound indicate that the battery is low (after about 18 hours of cycling). You can also charge your Hövding using an ordinary mobile phone charger with a micro USB connector.


COLLAR & SHELL  - The collar is made of waterproof functional fabric that provides the best possible protection for the built-in airbag system. The collar isn’t washable but is protected from wear, sweat and dirt by the surrounding fabric shell. Any marks on the collar can be rubbed off carefully with a damp cloth.
The collar is ergonomically designed with even weight distribution across the shoulders. It is slightly heavier at the back than at the front so that when cycling the weight is resting on your back. The main purpose of the enclosing shell is to make it possible for you to change the appearance of your Hövding. The shell is easy to remove and wash, or change for a different one to match your outfit.


AFTER AN ACCIDENT -  If your Hövding has been deployed we would like you to contact us.  Inside the collar there is a black box that records 10 seconds of data on the cyclist’s movement patterns from an accident. In some cases the data from an accident is interesting and valuable to us in our on-going development work. Some insurance companies cover part of the expense of a new Hövding after you have had an accident. Contact your insurance company to hear how they handle your case.ne shop.