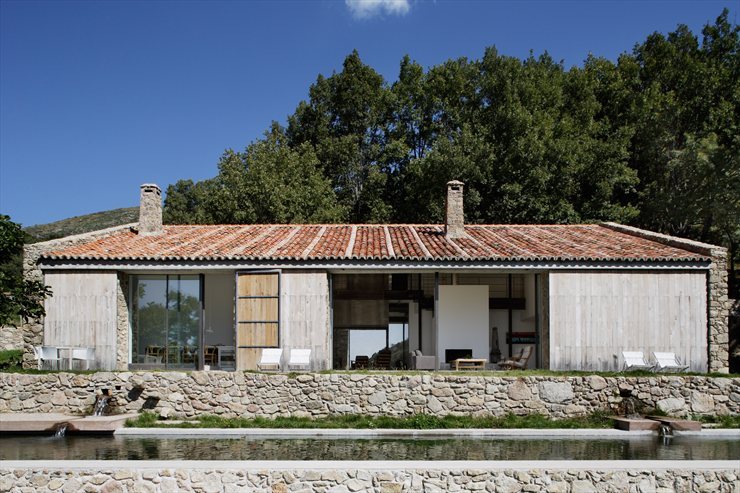 Situated in a privileged location in the province of Càceres, the house called Estate in Extremadura, designed by ÁBATON Arquitectura, stems from the need to renovate and transform an abandoned rural building into a family residence.

The designer Camino Alonso Ramos intended to demonstrate how a non-intervention on the territory and renovating the previously existing building was the most environmentally-friendly decision to make.

The project re-used existing volumes and materials also to keep in line with the natural environment in which its is located, creating a large central area for the living room and the kitchen, around which the various rooms are arranged.

The work made use of basic materials like water, iron, concrete and stone; in the courtyard a fountain has been constructed where the water spouts from a rock and contributes to cooling the house in the warmest months of the year. The central space is completely open from north to south to provide a panoramic view of the valley and to improve the feeling of living in the open. The problems of a lack of electricity and running water have been solved with a solar panel system with accumulators, and turbines have been installed which use the two rivers running through the estate to provide electricity in winter. One of the two terraces has been turned into a natural swimming pool with free flowing water and is also used for irrigation.