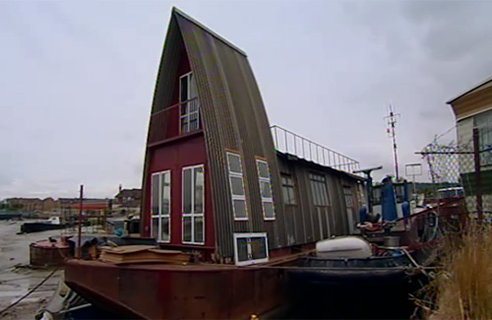 Not all grand designs live up to their billing. A houseboat project featured on Channel 4's series Grand Designs, a programme which focusses on unusual and elaborate home designs, was washed up on a beach in southern England as a derelict vandalised wreck almost a year to the day.

The original project was for an £80,000 dream houseboat for a family of four. The project was such an innovative one that it was featured on the popular TV series Grand Designs which has recently created a spin-off in Australia too.

The project involved renovating a disused barge using reclaimed materials and turning it into a state of the art eco-houseboat, but the tight-budgeted idea hit on problems and with no architect to supervise the work, was left unfinished and abandoned before the family could set foot on it. After years of abandon the barge moored off the coast at Leigh-on-sea was ripped from its moorings and ended up on the beach at Westcliff-on-Sea near Southend on the South east coast of England.

What can we learn from this? An Anonymous person once said “An idea is worth nothing if it has no champion” that's why we generally write about champions and not would-bes, but every so often....