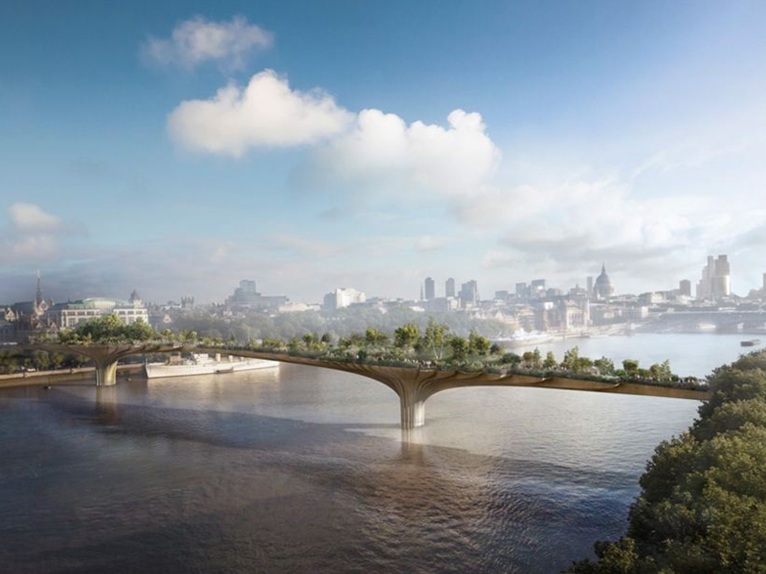 After winning a TfL (Transport for London) tender for proposals to improve pedestrain links across the city, the Thomas Heatherwick designed Garden Bridge is currently undergoing a process of public consultation, which will end on 20th December. This process will address issues like landscaping, materials used and operation, which are key to the project, prior to its submission for planning approval in the first half of next year. 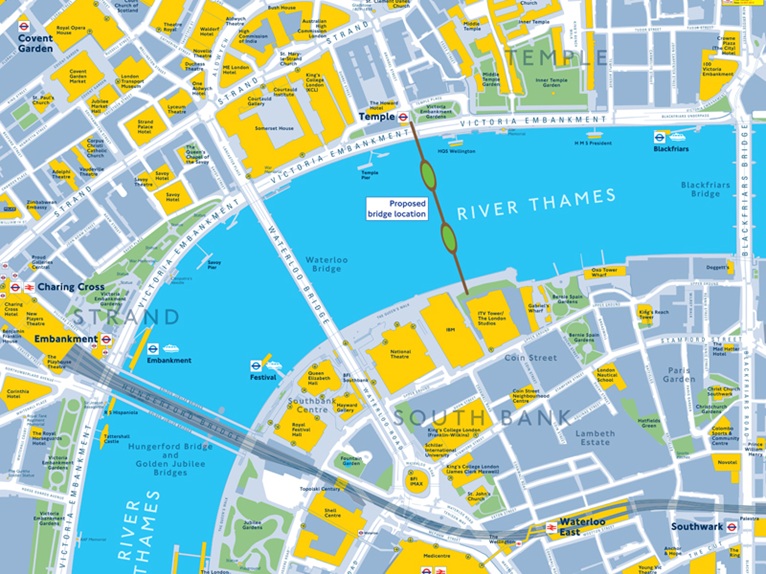 The bridge is expected to cost £150 m to design and build. In view of this, a company has been set up called The garden bridge trust, which will begin raising funds for the project as soon as it obtains its status of Charitable Organisation.
The bridge, designed by Heatherwick Studio and ARUP and inspired by the actress and human and animal rights activist Joanna Lumley, whose most famous role was probably "Purdey" in the New Avengers, will provide both a new walkway and a new landmark for the city. Somewhat appropriately the bridge will link two of the capital's theatre districts the West End and the South Bank also creating a new green space for the City which is already the “Greenest” in Europe with over 40% of its surface area covered with publically accessible green space. 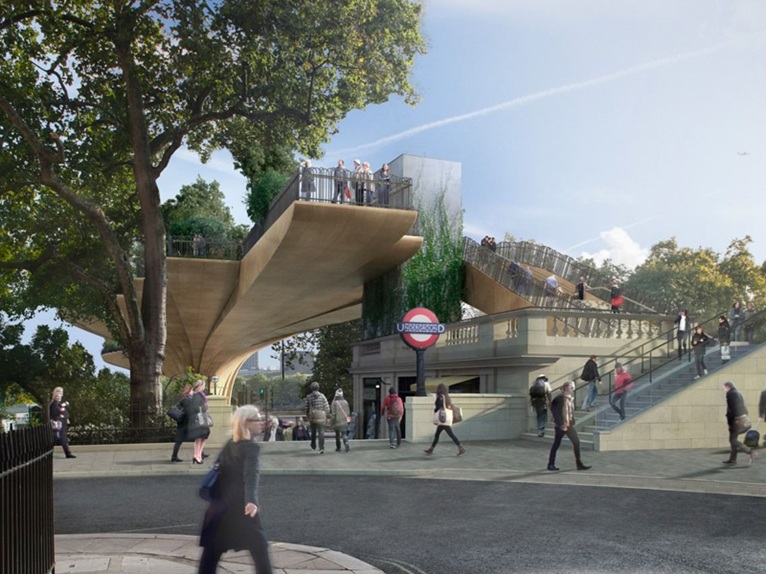 It is estimated that construction of the Bridge would begin in 2015, with its completion scheduled for the end of 2017.
The Garden Bridge, which was designed in conjunction with Arup, marks a significant departure from Arup's last London pedestrian bridge. The Millennium Bridge, designed by Norman Foster, was completed in 2000. This innovative and complex structure was designed to achieve a simple form, with a 4m wide aluminium deck flanked by stainless steel balustrades and supported by cables to each side, which dip below the deck at midspan enabling unimpeded views of London. 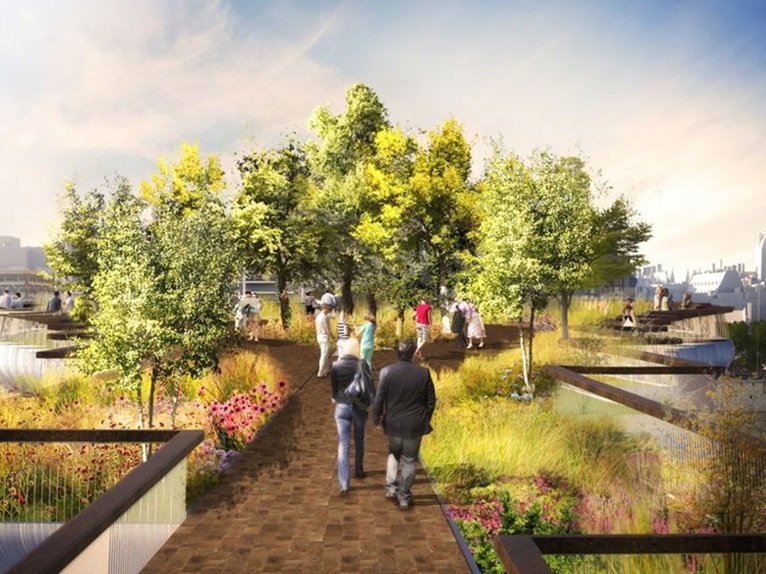 The landscape will be designed by leading UK designer and horticulturalist, Dan Pearson and the bridge will feature an abundance of plants, trees and shrubs indigenous to the UK and London that will change with the seasons.
What it has in common with the Millennium Bridge is that it will allow visitors to take in the views of some of London’s most famous landmarks, including St Paul’s Cathedral, the Shard and the Gherkin, but unlike it the same visitors will be able to enjoy the views sitting and relaxing amongst the garden’s woodlands. 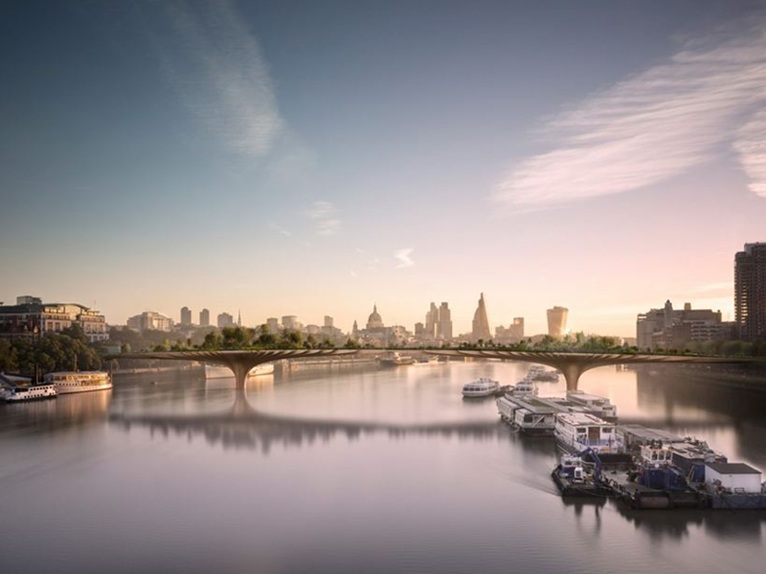 Lord Mervyn Davies, Chairman of The Garden Bridge Trust, said: “This is the first major milestone for the project and marks a very clear intent to create a new landmark for London. The scheme has been shaped and developed into a proposal that will contribute significantly to the future of London’s development and we are committed to ensuring The Garden Bridge will be something that London can be proud of. Our role is to take this project forward and to raise the necessary funds to build the bridge by the end of 2017.”

Joanna Lumley said: “This garden will be sensational in every way; a place with no noise or traffic where the only sounds will be birdsong and bees buzzing and the wind in the trees, and below the steady rush of water. It will also be a safe and swift way for the weary commuter to make his way back over the Thames. There will be grasses, trees, wild flowers, and plants, unique to London's natural riverside habitat. I believe it will bring to Londoners and visitors alike peace and beauty and magic.”

Thomas Heatherwick, designer, said: “London is where it is because of the river Thames. But over many years the human experience of this amazing piece of nature has been marginalised by successive transport moves. The city on the north bank and the historic district of Temple is almost completely isolated from the river by the dual carriageway of the Victoria Embankment that slices it's way along the north bank and other than its wonderful view, Waterloo Bridge is surprisingly unfriendly for pedestrians. There is now an opportunity to connect London together better, to give Londoners a huge improvement in the quality of pedestrian river crossing in this area, to allow us all to get closer to the river and at the same time to stimulate new regeneration possibilities at both ends where it lands. I believe that the combination of Transport for London's brief for a new river crossing and Joanna Lumley's inspiration for a new kind of garden will offer Londoners an extraordinary new experience in the heart of this incredible city.”

More information on the public consultation, which runs until 20th December can be found at: www.consultations.tfl.gov.uk/rivercrossings/garden-bridge