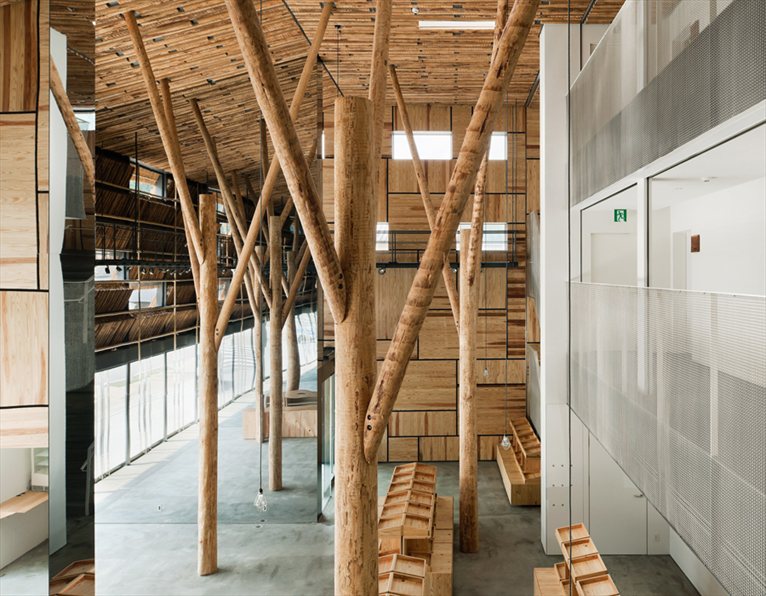 Kengo Kuma has designed Yusuhara Machino-eki with an unusual blend of functions, the structure is both a market specialised in local products and a small 15-room hotel.

A famous road goes through Yusuhara, a small town in the Kōchi Prefecture on the smallest island of Japan, Shikoku, which historically took travellers through some of the remotest areas of Japan. Dotted along this road, there are several stop-off points for the travellers called “Chad Do”, not just rest-rooms but a kind of cultural salon where tea was served free of charge.

The project, designed to be at the centre of the social life of this small town, has used many architectural elements borrowed from the “Chad Do”: First of all the bales of straw used in the main façade to create the geometries of an unprecedented  wall-screen.

Their arrangement, an alternation of fills and voids, seeks to exploit the great atrium of the market as a sort of heat flywheel, also for the windows of the hotel which look out from it. Inside, the market area contains a jungle of trees/pillars, thin cedar trunks simply stripped of their bark and arranged according to a rather free geometry to support the roof.

Visiting this building you can see all the features of Japanese architecture: starting from its austerity and from the dry construction methods, up to the use of light and porous materials, left as natural as possible. Indeed, westerners over the centuries have traditionally chosen stone (and later concrete) to subdue the power of nature, while the Japanese have chosen wood as predominant material, maybe because they feel more a part of nature.

The use of unprotected straw and untreated wood, assume acceptance of a natural ageing of the building. In the last few years, this type of approach has come back into vogue in the west with the rediscovery of once forgotten materials and knowledge, as is witnessed by the establishment of thatching straw growers and timber growers associations.