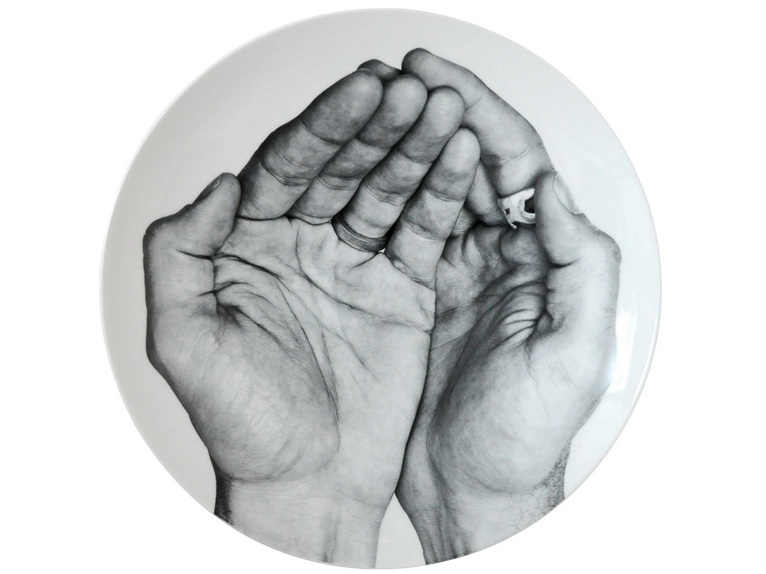 DESIGN_To celebrate its 150 years, Bernardaud - ancient manufacturer of  porcelain pieces - is gone to meet the world of art by asking moviemakers, photographers and artists to bring their view of her work and her image. It shows a three-part exhibition that shows how porcelain is present, living, luminous, sensual and inspiring.

"In this project, Prune and I wanted to focus on a man's most essential "tool," his hands, which can function as a drinking cup or as eating utensils." 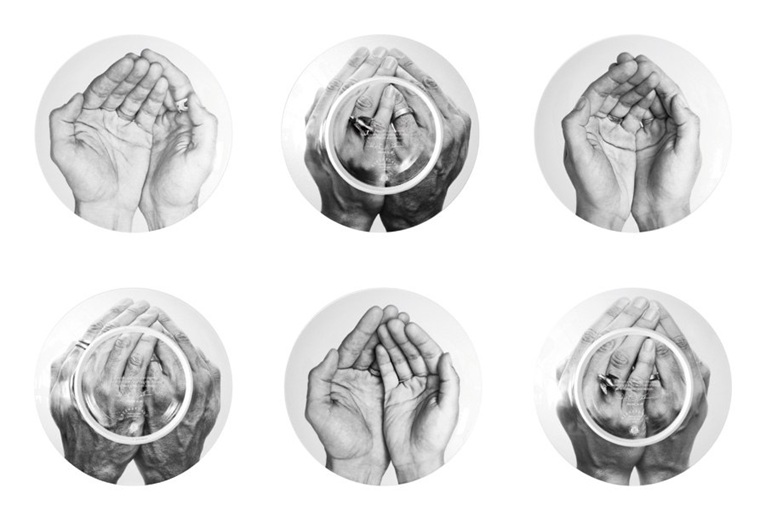 As Darwin put it: "Man could not have attained his present dominant position in the world without the use of his hands. Here, our hands have been photographed. Families will pass on an heirloom dinner service that once belonged to ancestors of which nothing remains but a photograph and a few plates.

At least our descendants will have the photograph right on the plate! Prune and I live in New York where we initiated a community of artists that holds big dinners every month. Everybody cooks, everybody brings something. The dinner table is a nerve center where we share a taste for good things, the art of living well!

It's nearly ten years since Prune and I put on our first art show, called "Toit et Moi", at the very beginning of our story together. Those plates are a logical and symbolic collaboration for us." 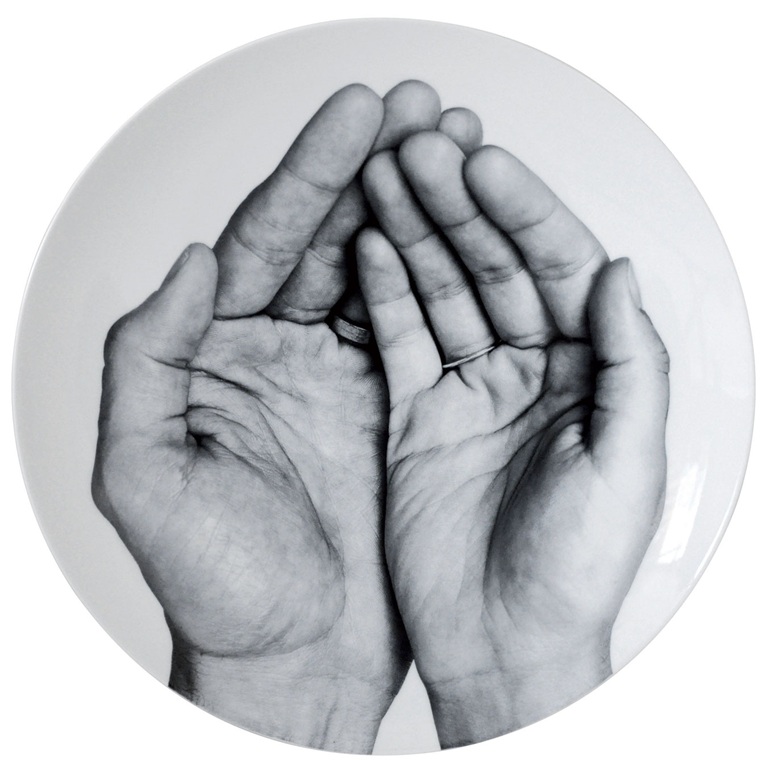 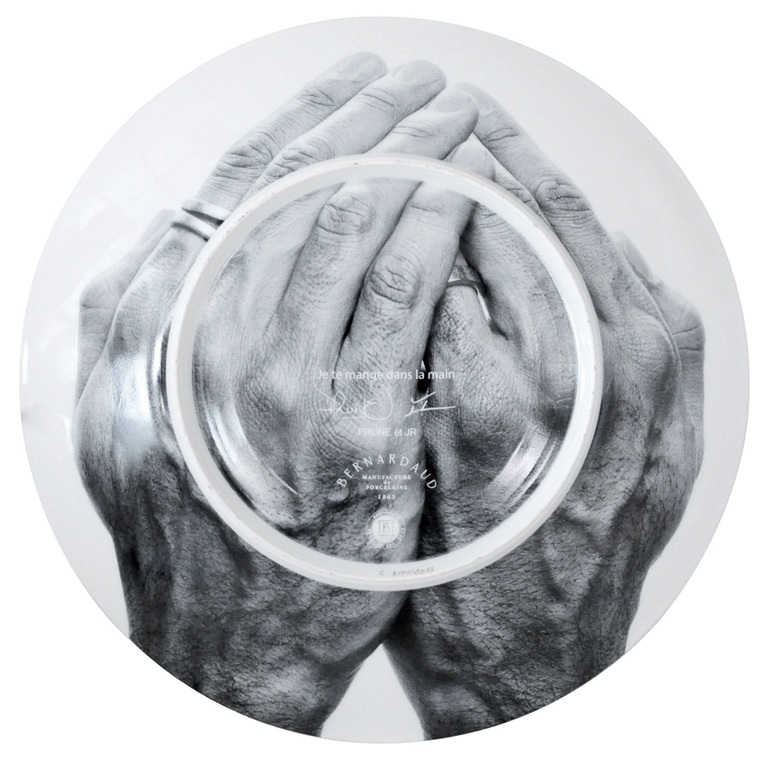 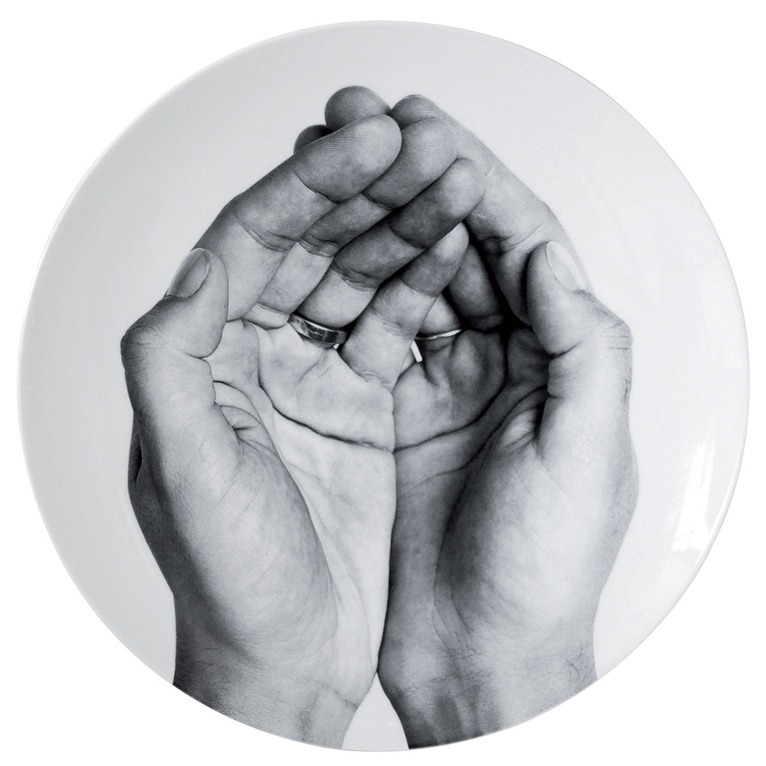 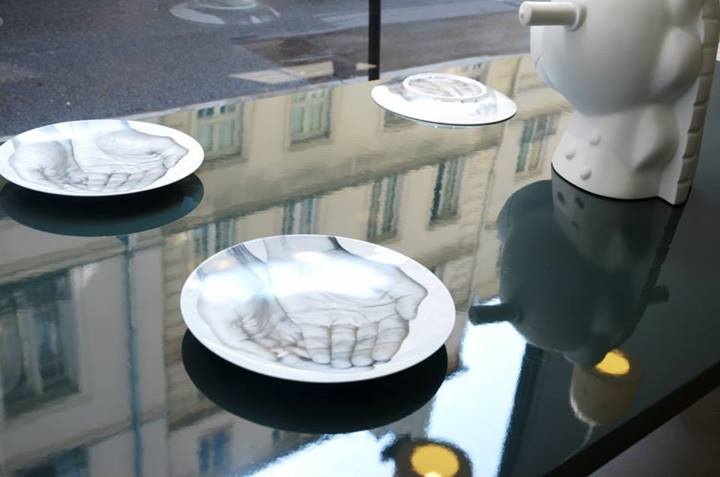 JR exhibits freely in the streets of the world, catching the attention of people who are not typical museum visitors. In 2006, he created Portrait of a Generation, portraits of suburban "thugs" that he posted, in huge formats, in the bourgeois districts of Paris. This illegal project became "official" when the Paris City Hall wrapped its building with JR's photos.

In 2007, with Marco, he made Face 2 Face, the biggest illegal exhibition ever. JR posted huge portraits of Israelis and Palestinians face to face in eight Palestinian and Israeli cities. In 2008, he embarked on a long international trip for Women Are Heroes, in which he underlines the dignity of women who are often the targets of conflicts, and created The Wrinkles of the City.

In 2010, his film Women Are Heroes was presented at Cannes. In 2011 he received the TED Prize, after which he created Inside Out, an international participatory art project that allows people worldwide to get their picture taken and paste it to support an idea and share their experience - as of December 2012, over 120,000people from more than 108 countries have participated.

As he remains anonymous and doesn't explain his huge full-frame portraits of people making faces, JR leaves the space empty for an encounter between the subject/protagonist and the passer-by/interpreter. That is what JR's work is about, raising questions...

Prune Nourry is a young French artist who lives and works in New York. Mainly sculptor, Prune works through interactive performances, large ephemeral installations, photography and film. Based on research and interviews with scientists, she engages the audience to reflect on societal issues spurred by Human evolution.