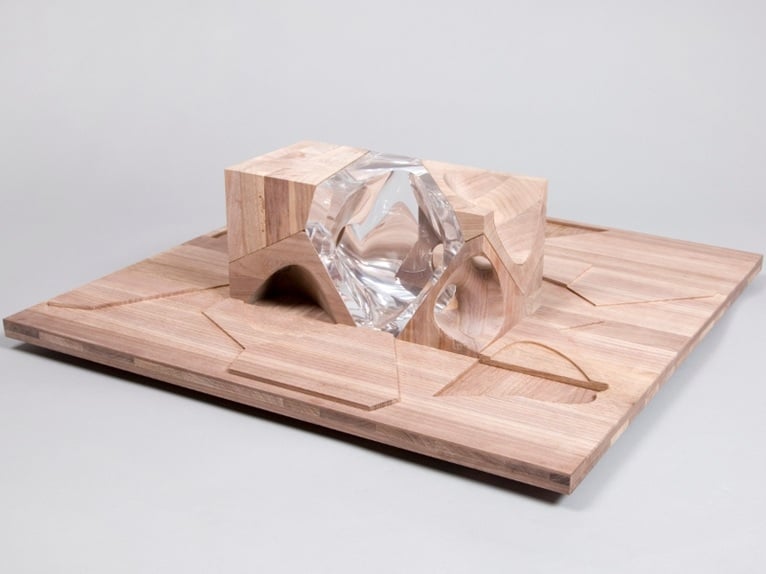 On 11th November 2013 20 unique dolls’ houses, designed and built by some of the world’s best architects and designers and including artworks by world famous artists including Grayson Perry and Chris Ofili, will be auctioned at Bonhams in London in aid of KIDS. 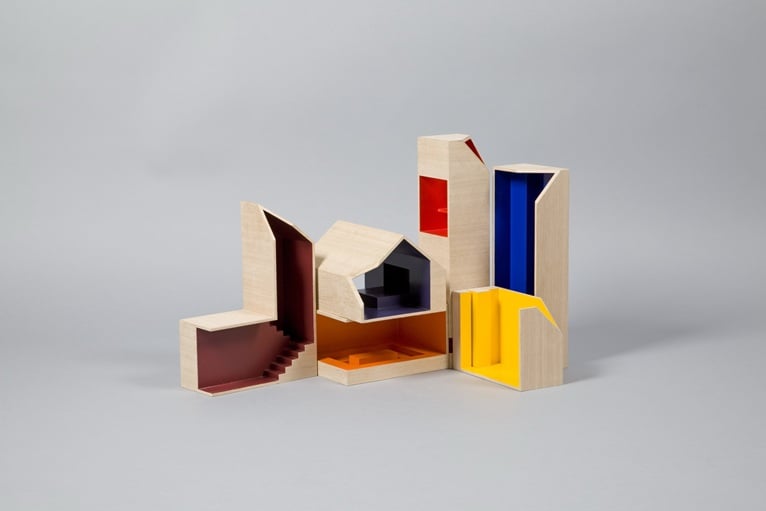 The project has been curated by property developers Cathedral Group and is inspired by the dolls’ house that Edwin Lutyens designed for The British Empire Exhibition at Wembley in 1922, using a very traditional children’s toy to display the very best of modern architecture, craftsmanship, art and interior design. 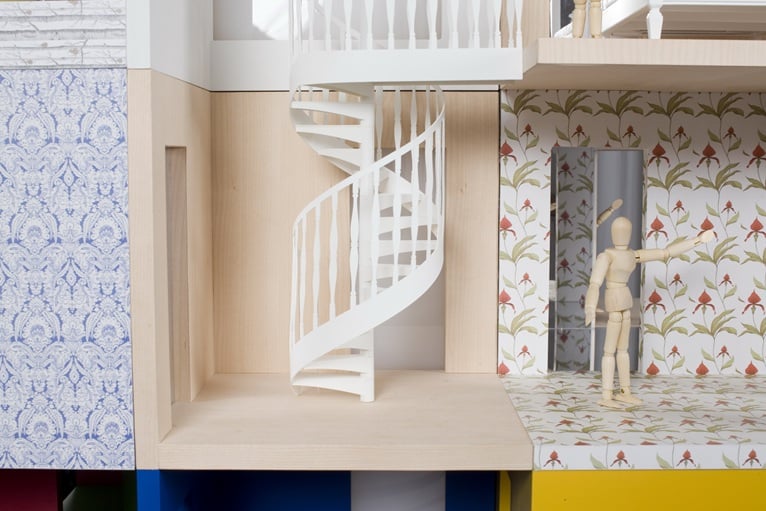 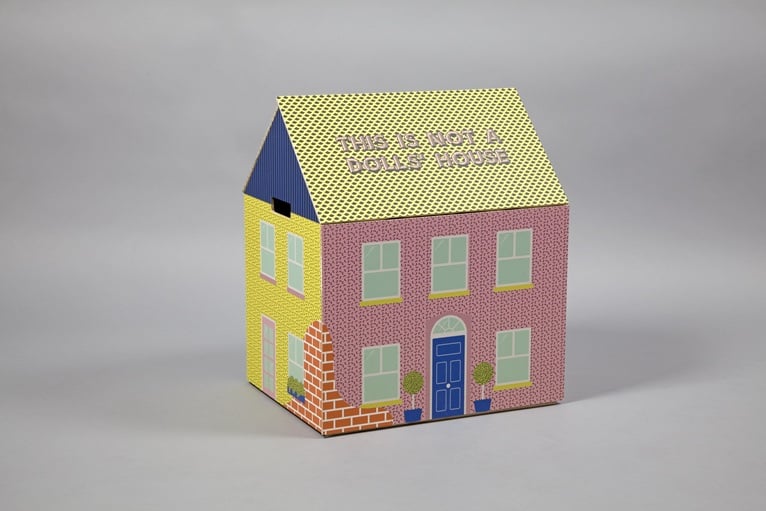 Each dolls’ house – which fits on a 750mm x 750mm plinth – also includes a unique feature to make life easier for a child with a disability. 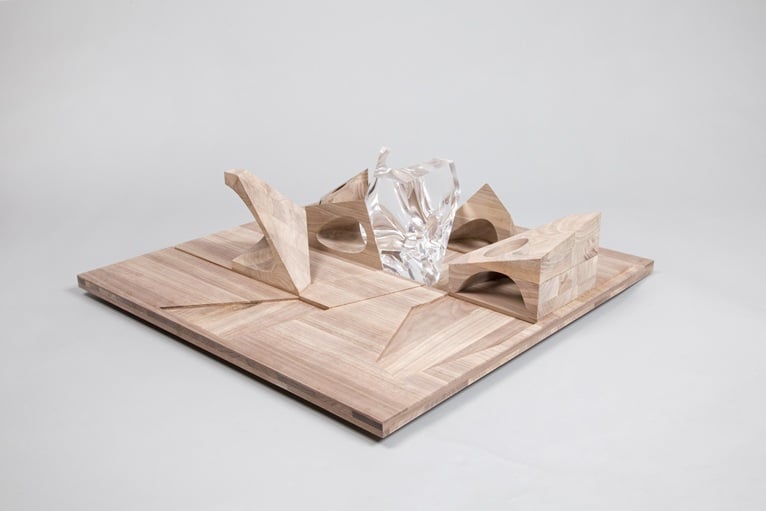 This must be the place is the doll's house designed by Zaha Hadid: it is an interpretation of the Ideal House pavilion commissioned in 2007. The ZHA doll’s house is a puzzle offering many possibilities to play and experiment in creating endless variety of unique compositions. It is designed to encourage a continual re-evaluation of composition and form. Pieces can be assembled and dismantled in many combinations, to be re-assessed with each new composition – voids are interpreted as new unique rooms or courtyards for dolls to inhabit. 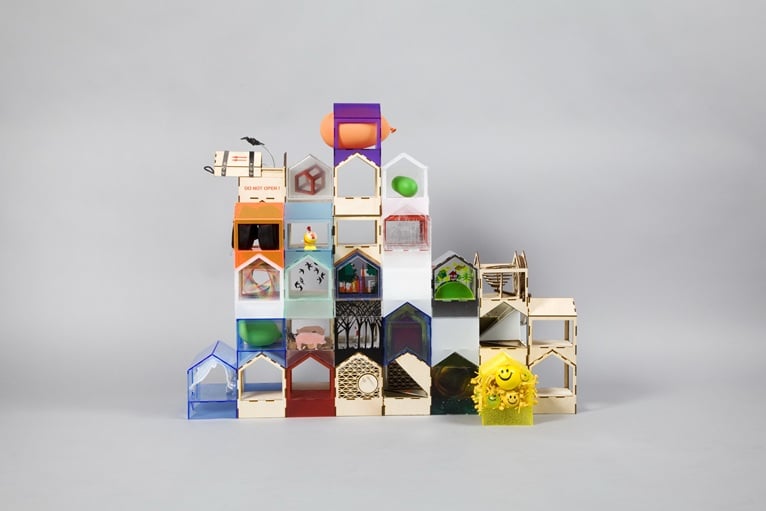 Jigsaw House by Make Architects is inspired by one of the oldest and simplest games,the jigsaw puzzle, a large house was created, made up of many small houses. Each partner in the practice was encouraged to invent their own house filling each room with their own sensory expressions of play and colour. The result is 26 fully designed houses with a further 20 empty houses to combine and complement the Jigsaw House. 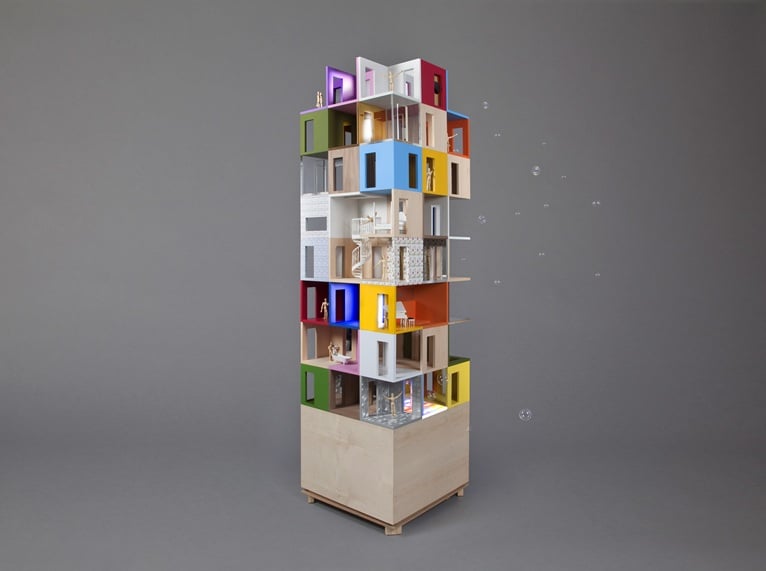 A dolls’ house made of three-sided rooms by Lifschutz Davidson Sandilands is a miniature domestic world where rooms are composed and stacked by children with learning disabilities and sensory impairments. Small houses, cities, even worlds are created by the children and the rooms rely on connections with one another to form a whole. Rooms of delight react to movement and respond to touch and hearing senses with particular appeal to children with sight and dual sensory loss. 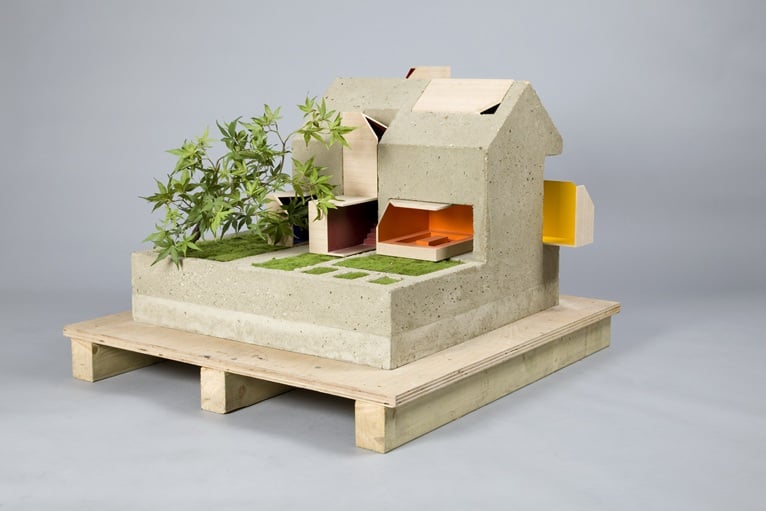 Inside Out by Coffey Architecture is an inclusive dolls' house for all children whatever their needs and abilities. One element is a concrete house with a bonsai tree and herb garden which sits outside. The second, a series of elements that are individual oak rooms, hollowed out in bright colours that can be inserted into the house. It is fun for children and encourages outdoor play and most importantly raises a critical housing issue for families with disabled children. 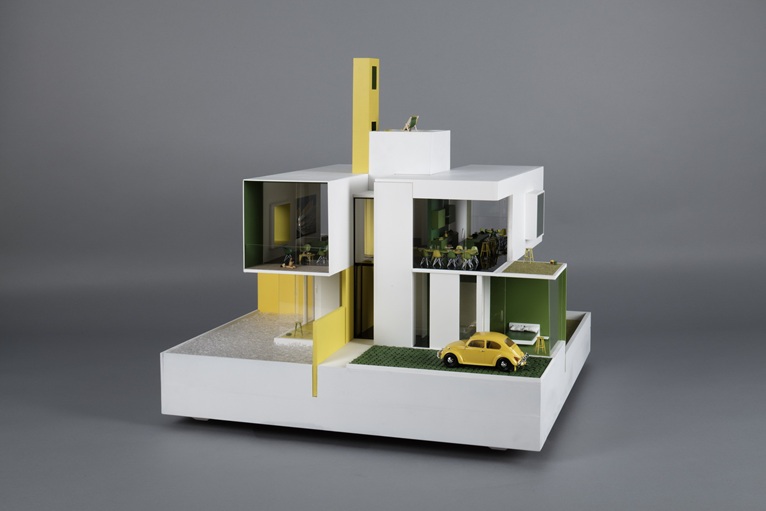 Compass House by AHMM has been designed for children with visual impairment in mind, we expanded our use of colour and texture to bring the house to life for them. It's a weekend retreat - a place of escape that acts as a backdrop for ever changing scenarios. 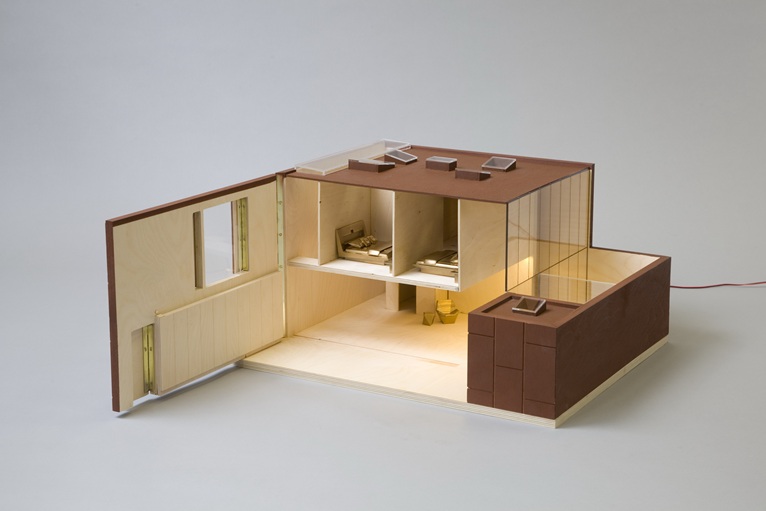 Electra House by ADJAYE ASSOCIATES - in collaboration with Base Models and artist Chris Ofili is a flexible home that contains a live/work space. Designed to be accessible to all, the ground floor is a continuous space, undulating between outdoor courtyard and creative indoor space. Light is a phenomenological presence inside the house, its properties of reflection, luminosity and movement provide the focal experience for all. 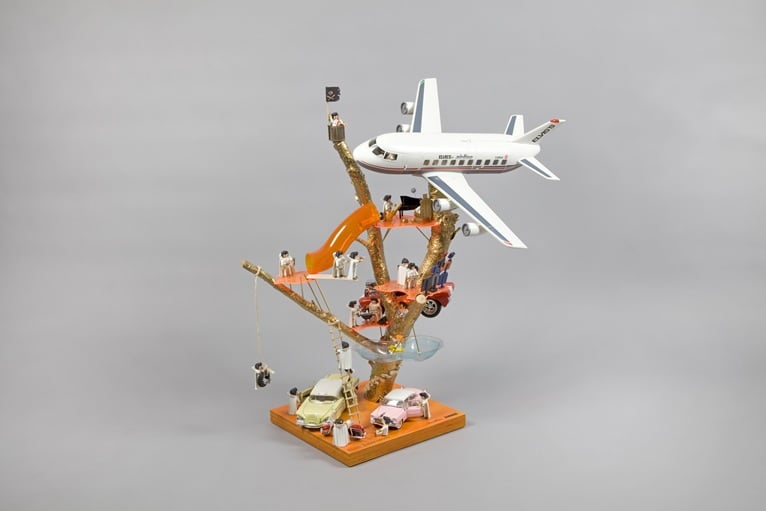 Elvis’s Tree House by AMODELS is based on a real playground in Southampton. The simple concpet was to be as physically challenging as possible, because kids learn for themsleves faster that way. So why Elvis, well that’s a long story. 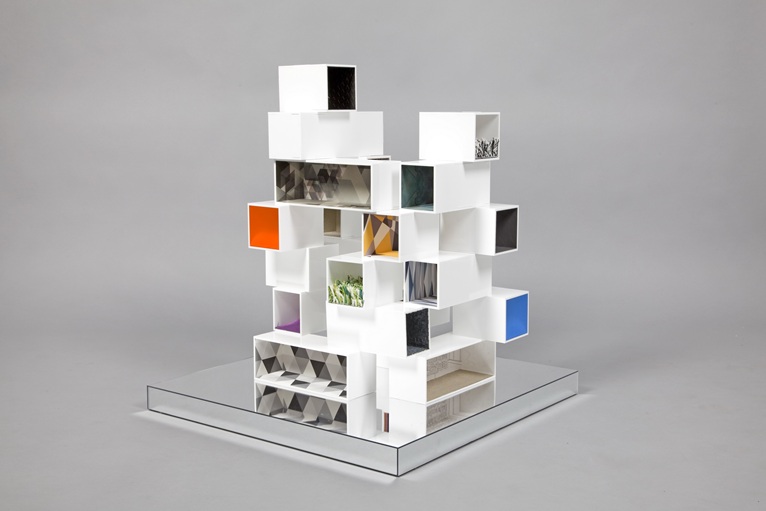 Haptic House by Dexter Moren is based on the concept of 'sensory play', the dolls' house encourages children to look, listen, touch and feel. A series of components, identical in character, which aim to inspire children, bring the house to life by stimulating the primary senses. Unlike conventional Doll's House design, the 360-degree access means there are no defined rules of how it should be played -inviting the option of group play or individual discovery. 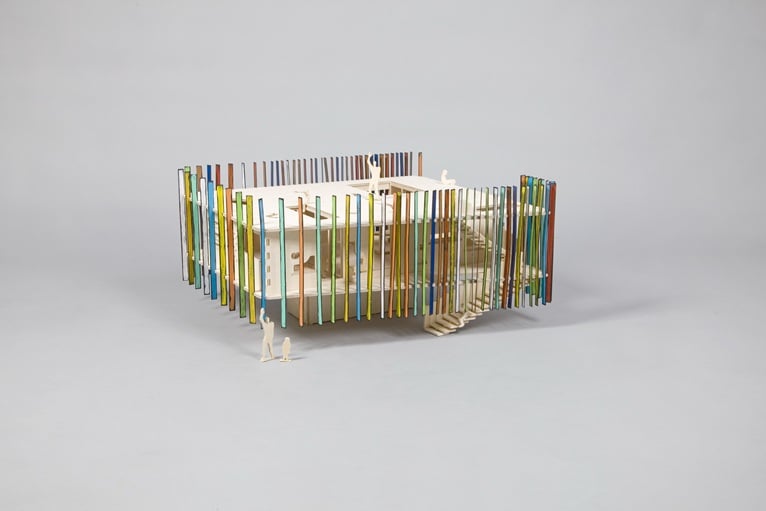 dRMM Architects in collaboration with Richard Woods Studio and Grymsdyke Farm designed House for a Deaf Child, which has been designed around the consideration of a deaf child. It's an object to play and learn with, but also is a space to inhabit, designed to support visual communication through sign language. The exterior has adjustable pieces to give colour expression on the outside, and control of light and views from the inside. With further discovery these pieces can be reconfigured into new spaces and furniture. 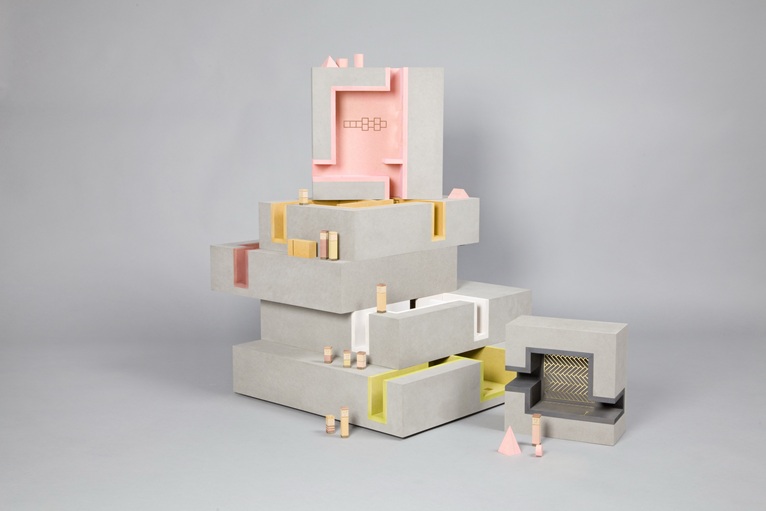 Duggan Morris Architects in collaboration with Unit 22 Modelmakers created Multi-story. It has been designed to aid early intervention strategies for children with developmental disability Autistic Spectrum Disorder. In consultation with Christina, mother of high functioning autistic Louis (5), the house swaps the visually noisy cross section of the typical dolls house with a set of rooms arranged in either a stack or plan form. Each room can be used in isolation or as part of a sequence to provide a focused platform for learning and role play. 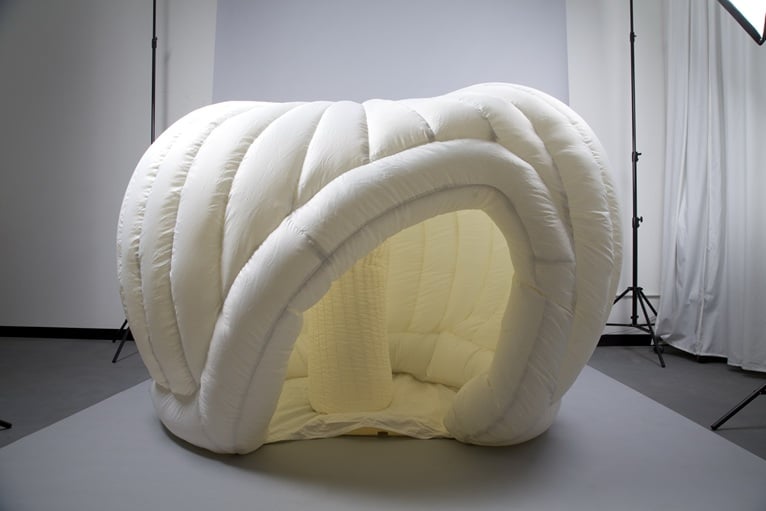 GUY HOLLAWAY in collaboration with Hemingway Design designed Jack in a Box: a solution which makes the imaginary reality so that the child can live within their fantasy, becoming 'Alice'. They are confronted by a simple box. When switched on, the inflatable structure inside begins to fill with air powered by an integrated fan. In a sequence of events, the dolls' house roof opens and the walls collapse to allow the organic structure to grow out of the box. 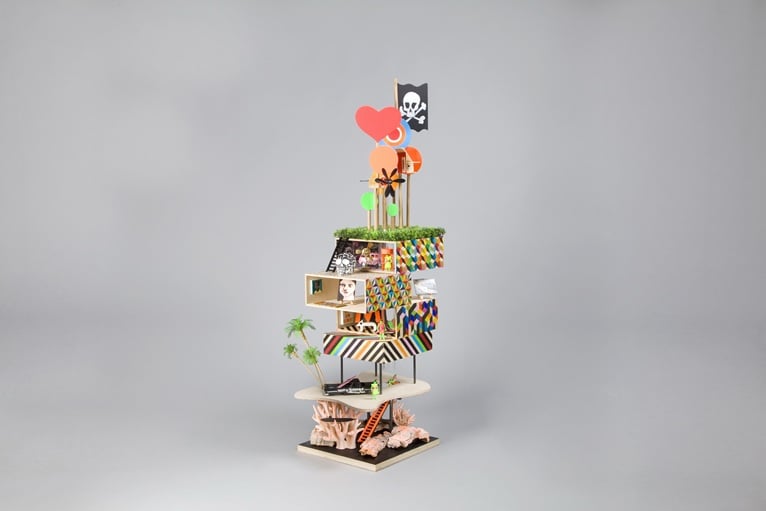 "there’s a place out there to the west of town, where nobody pushes no one around

a place where birds and fishes play,

on a giant coral far away

where the sun is warm and the breeze is cool, and the sea is bluer than a swimming pool

you can play music and dance all day, on a giant coral far away

just imagine you could be, in a house on the coral in the deep blue sea" 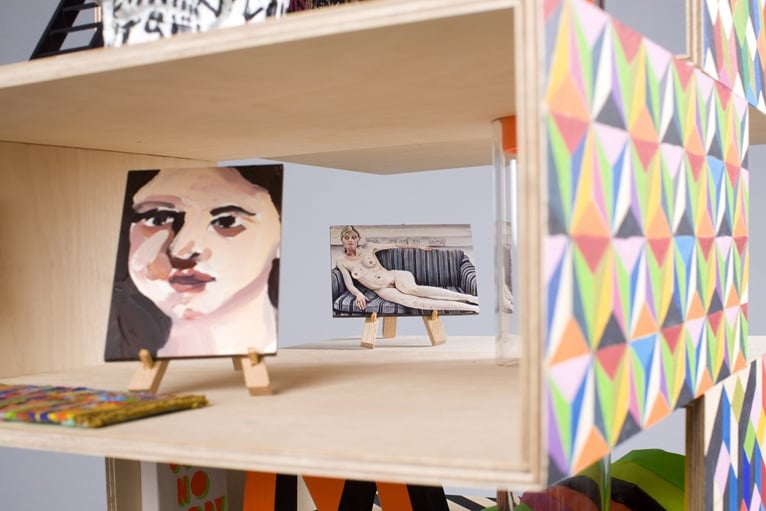