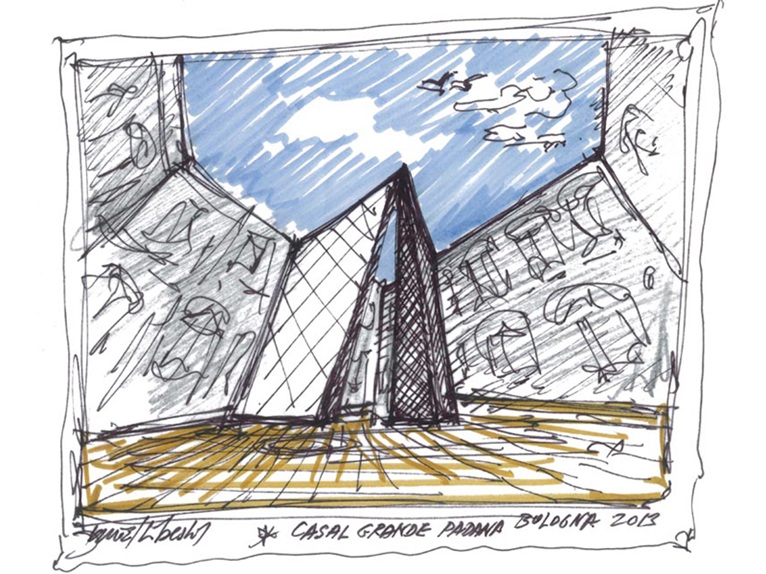 Pinnacle is an installation designed by Daniel Libeskind and produced by Casalgrande Padana for the Bologna Water Design 2013, the extra-fair event held at the same time as the Cersaie and brings together some bug names of the international architectural and design worlds to experiment with new approaches to the design of water and ceramics.

Located in the 17th-century Cortile del Priore at the former Maternità, the construction, covered in metal-finished unglazed stoneware panels designed by Libeskind, pays tribute to the dramatically vertical layout of Middle-Age Bologna that can still be seen in its famous towers and in ancient buildings.

Consisting of two double ceramic façades that bow to meet into a bold pinnacle, symbolically stretching out to the sky, the installation counteracts the strictly horizontal layout of the neoclassical facades of the former hospital.

The Pinnacle slabs used in this project are made with the innovative Bios Self-Cleaning® technology, which offers self-cleaning surfaces and reduces environmental pollution.

This project for the Bologna Water Design 2013 is a milestone in the partnership between the New York’s architect and the Emilia-based company that dates back to the building of the Residenze CytiLife, for which Casalgrande Padana supplied 50,000 square metres of ceramic tiles and that is going to continue with some new ranges of unglazed stoneware, of which these Pinnacle slabs are just a preview.

In connection with the Bologna Water Design 2013, on Thursday September 26th at 06.30 pm, the Conference Hall of the former Ospedale dei Bastardini will host a workshop with Daniel Libeskind, Michele De Lucchi and Philippe Daverio. Afterwards, the architect will hold a press conference at the Pinnacle installation.