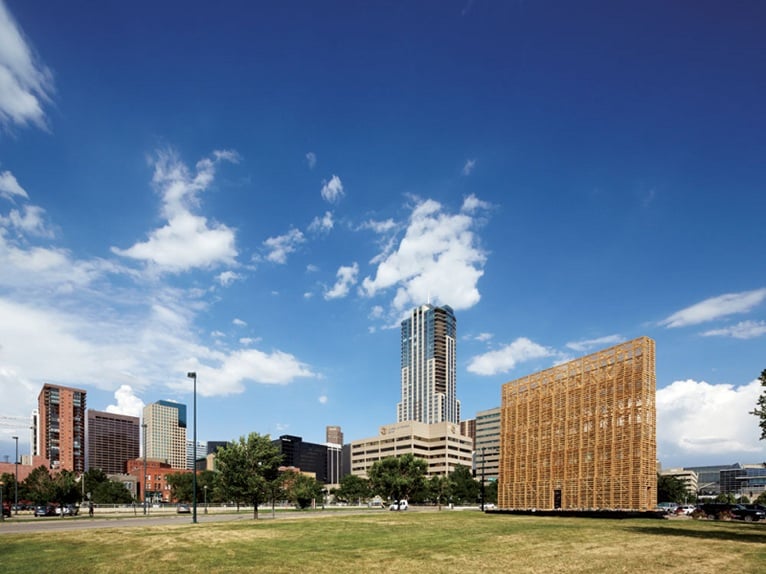 EXHIBITION _ The Biennial of the Americas 2013 has hosted Draft Urbanism to immerse the city with free public events highlighting art, architecture, film, and performance across the Americas.

The citywide art exhibition has been feature seven architects from across the Americas and four large scale architectural installations.

The curatorial team was composed by Carson Chan, Gaspar Libedinsky and Paul Andersen 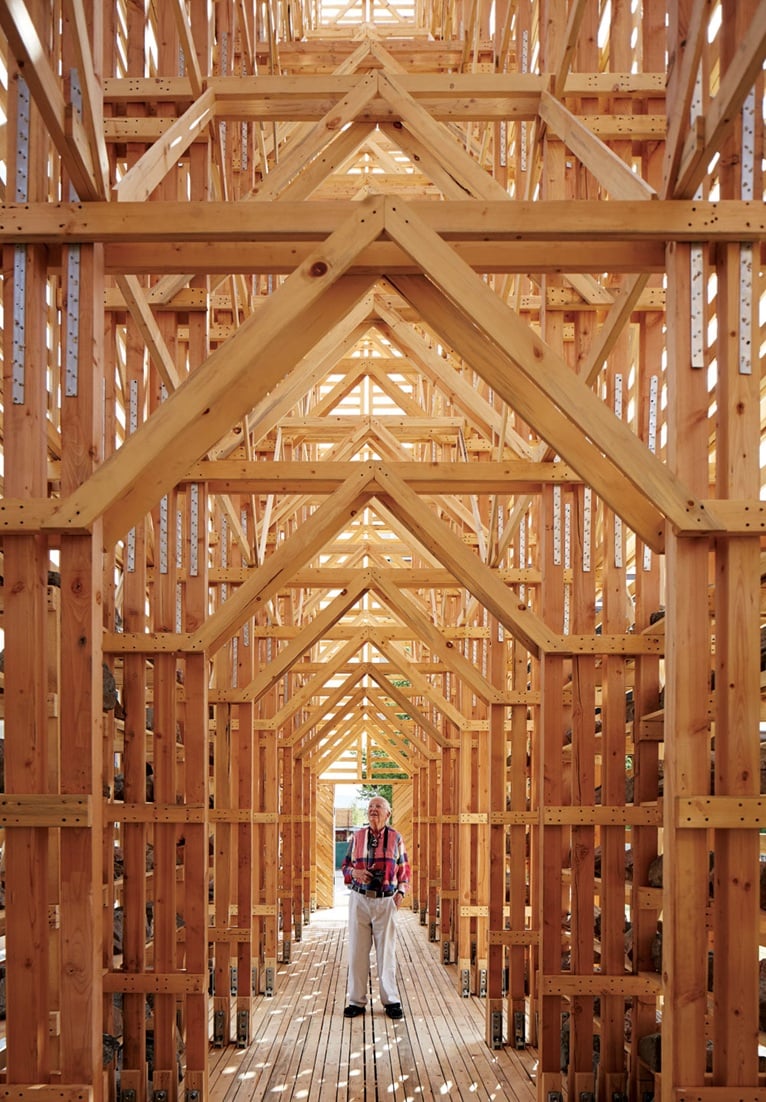 Pezo von Ellrichshausen’s Mine Pavilion has multiple overlapping identities. Its simple form combines several building types rendering it a billboard to drivers but a tunnel to pedestrians. Mine Pavilion’s height evokes a tower while its intermediary site conjures a bridge, and its materials and structural detailing echo a mining building. Also the project is contextual; every typological reference once defined the site.

For example, in 1958, it was a mining settlement when gold prospectors flocked to Larimer, forming Denver City. Mine Pavilion also addresses how to connect the isolated Auraria campus to the city. Historically, it was considered that a better bridge between the campus and downtown might mitigate the problem. However, the architects’ approach is to create an urban zone in the grassy plain of the median. In the site’s rich tradition of discovering new value in the land, Mine Pavilion is 21st century prospecting. 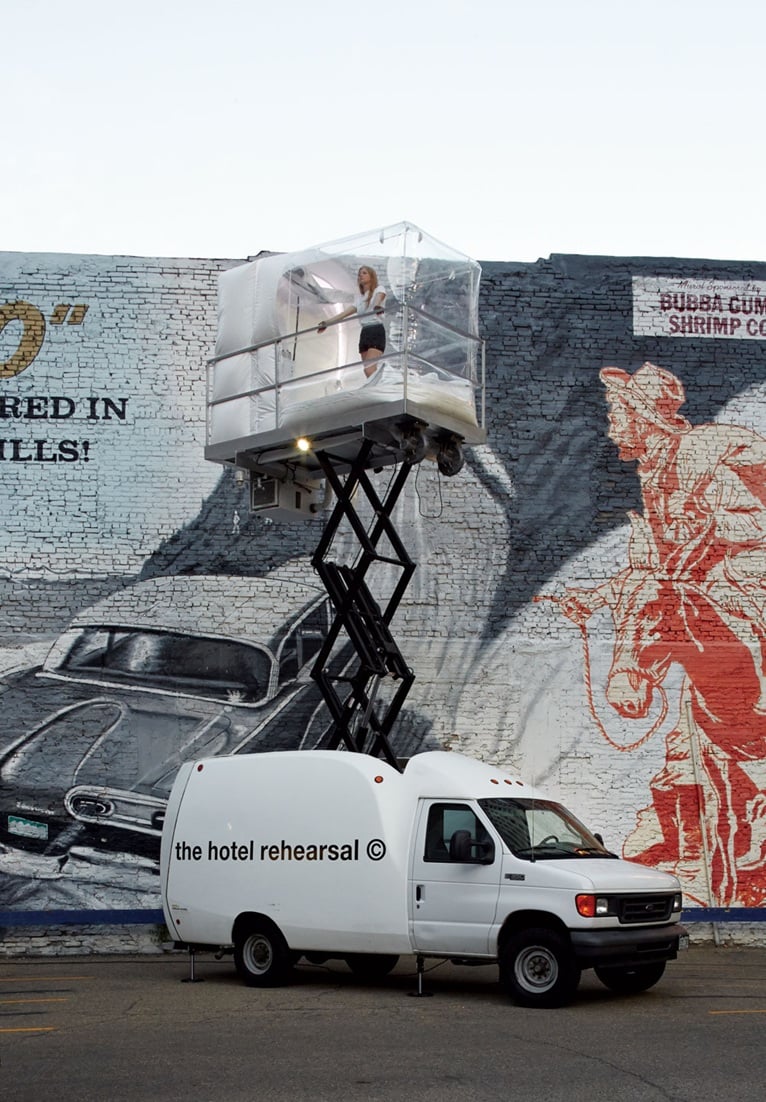 Alex Schweder’s The Hotel Rehearsal hybridizes two mechanisms of urban mobility: the automobile as an icon of suburban sprawl and the elevator as an icon of urban density. Merging the two, Schweder’s mobile room parallels Denver’s urban trajectory. Ethnically, socially, economically, and culturally, the once clear distinction between city and suburb is rapidly blurring. In 2010 for the first time, more racial minorities inhabited the suburbs rather than urban areas. Apartment towers are built beside single-family homes, and malls have popped up downtown. The Hotel Rehearsal is a prototype for this increasingly mixed context.

The Hotel Rehearsal also presents an alternative perspective on the surface parking lot, an underused and disliked fixture of downtown. Hotels have replaced many of the lots, but instead of converting an entire parking lot, Schweder suggests that each space can be individually and temporarily developed. The hotel room becomes a dynamic building block for a small-scale provisional city. 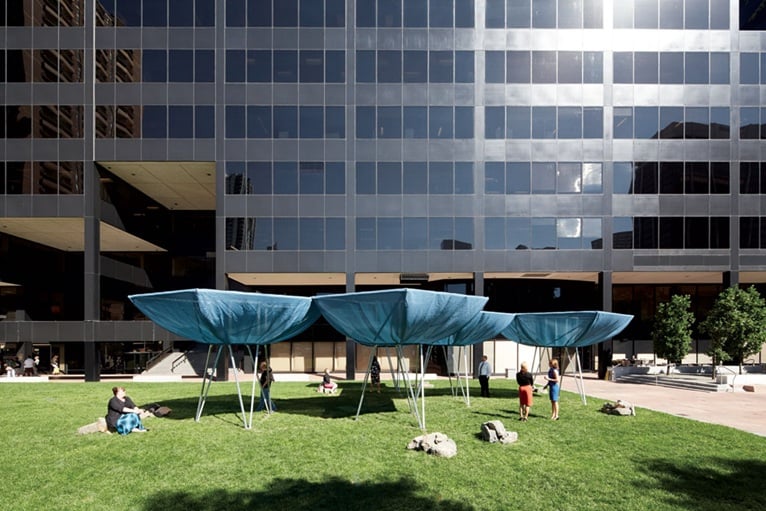 Skyline Cloud by plan:b arquitectos is an array of identical shade structures in Skyline Park, a notoriously empty space despite its central location. The architects’ deploy shade as an urban material, a generic platform on which many different activities and events can play out. controlling the climate and visual atmosphere of the site, plan:b’s installation encourages spontaneous social activity.

Skyline Cloud’s urbanism is defined by its overlapping uses. The shade structures’ form is part umbrella, part space frame, and part cloud. The installation is distinct in that its shifting identities are also defined by ever changing patterns of use. Its character is a function of what people are doing beneath and around it—businessmen eating lunch, kids playing, a crowd watching a movie, couples napping, the hubbub of a beer festival, among other scenes. The fabric cloud, and the shade that it provides, is social infrastructure enacting a program of civic participation. 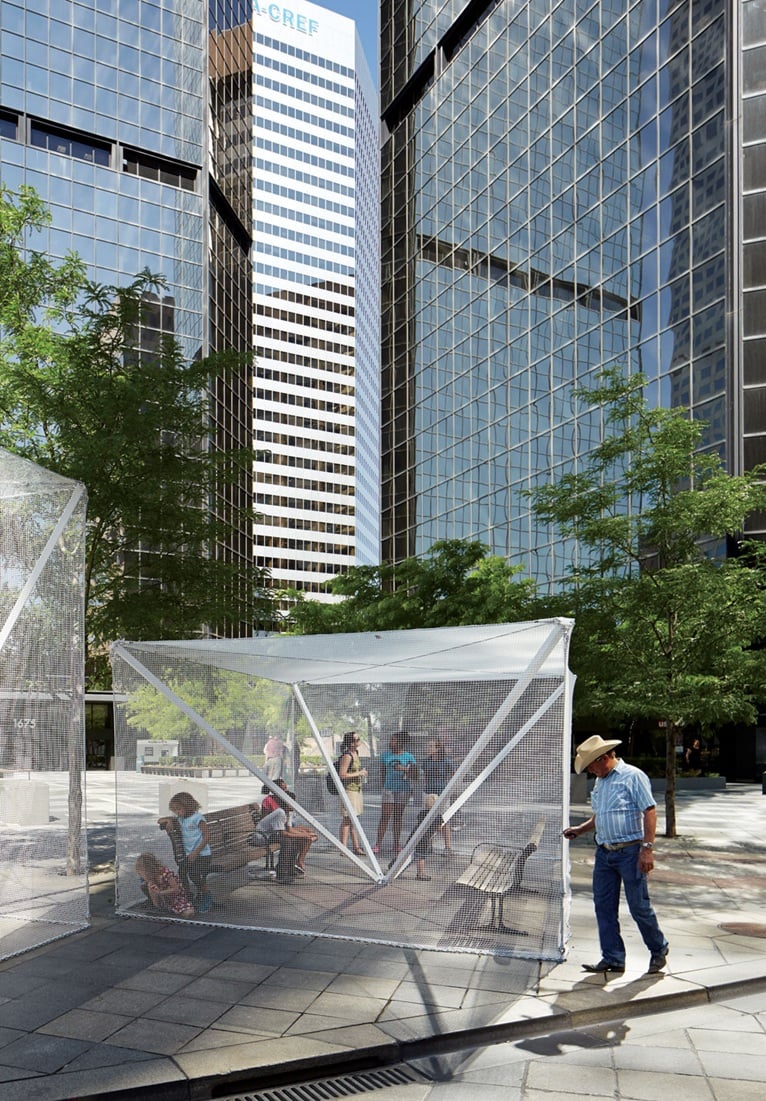 The Mirror Stage by June 14 Grohbrügge&Chermayeff is surrounded by diverse socioeconomic and ethnic populations. The project creates a collective identity for this group by adding butterflies—mall-goers share a common perspective on their new companions creating a type of social unification. Each of the butterfly cages encloses a different piece of site furniture, engages a different set of buildings, and is a unique size and proportion to strengthen the perception that they are a cohesive group of outsiders encouraging investigation. 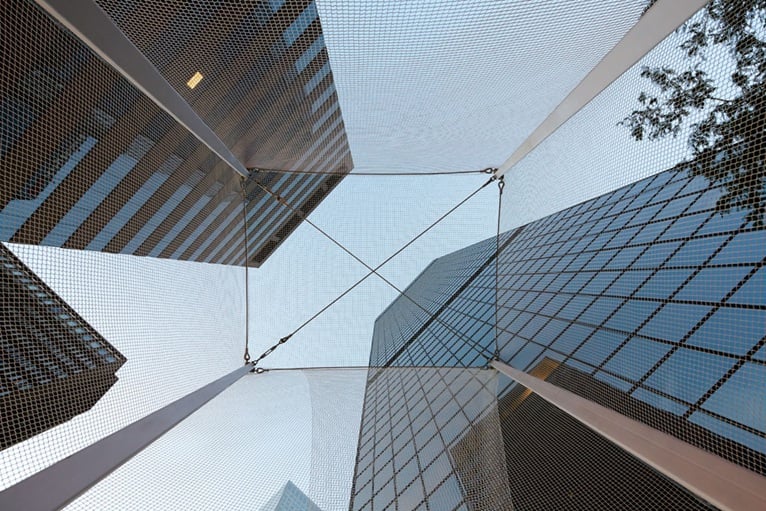 The Mirror Stage solves visual problems at various scales. At the block scale, cables connect to the tops of adjacent buildings, subdividing the void above the street. Guiding one’s gaze upward, they reshape the compressed space of the mall into an expansive volume. The butterfly habitats concentrate one’s attention creating an escape from the mall’s cacophony. If the cables alter the visual identity of the mall by way of distraction, the cages do so by way of focus.