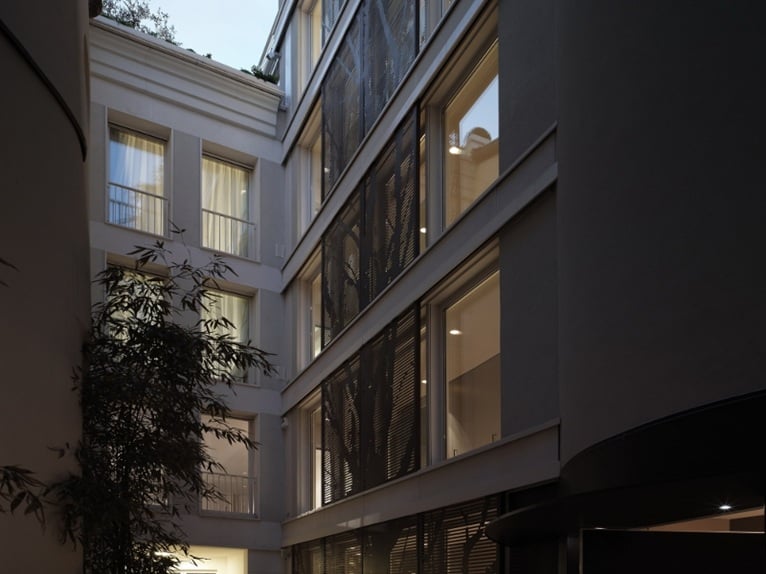 The building  located in the historical centre of Milan, the result of the work of the Arassociati Architetti office, responsible for the architectural design, and designer Antonella Tesei, who worked on the interiors of her own home/office, is one of the examples of collaboration between the council planning office of Milan, and private entrepreneurship and Milan designers who worked together to redevelop a void, an open wound in the fabric of the city since 1943.

It is a delicate and important intervention for memory of the city as it contains the archaeological remains of the Imperial Palace dating back to the Roman period and the fifteenth-century tower Torre Gorani, the only architectural feature to escape the 1943 bombings.

This new building, between two buildings, is a small private city building that recomposes the urban void left by the 1943 bombing and extends it downwards on the grounds of its original Gothic plot. A relationship between old and new, between continual fronts and rears open on new prospectives that measure up with the history in its sedimentation, but also in its ability to build the present.

Despite its limited size, the project thus assumes many complexities of the place. At the various levels it provides residential areas and on the ground floor shops; simple uses organized so as to suitably take advantage of the longitudinal section of the entire lot with progressive terraced areas overlooking the new public spaces of the archaeological area of Via Gorani and via Brisa. 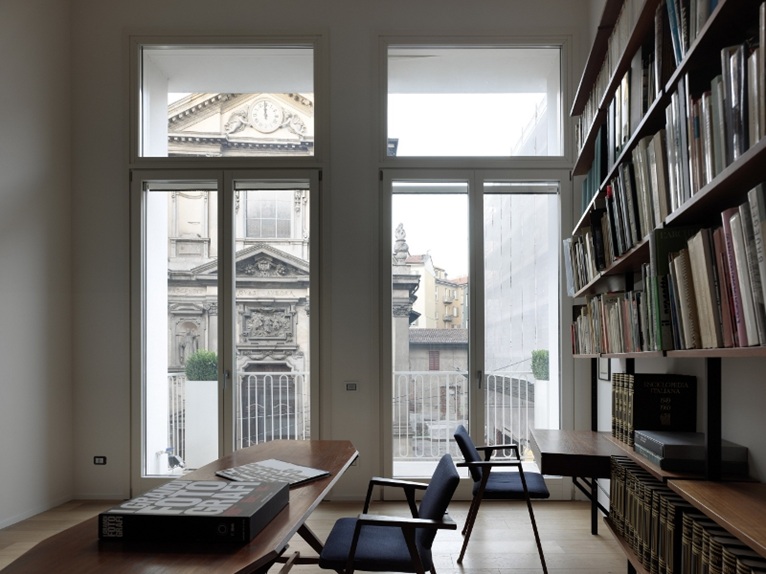 The project involves residences at the various levels, which having to also assume a series of architectural and morphological constraints from the adjacent buildings, are organised in such a way as to exploit the longitudinal section by gradually decreasing the height of the building towards the interior of the lot. This feature determines the creation of a series of large green terraces: true hanging gardens of great decorum that enhance the interior spaces overlooking the new public square and the roofs of old Milan. 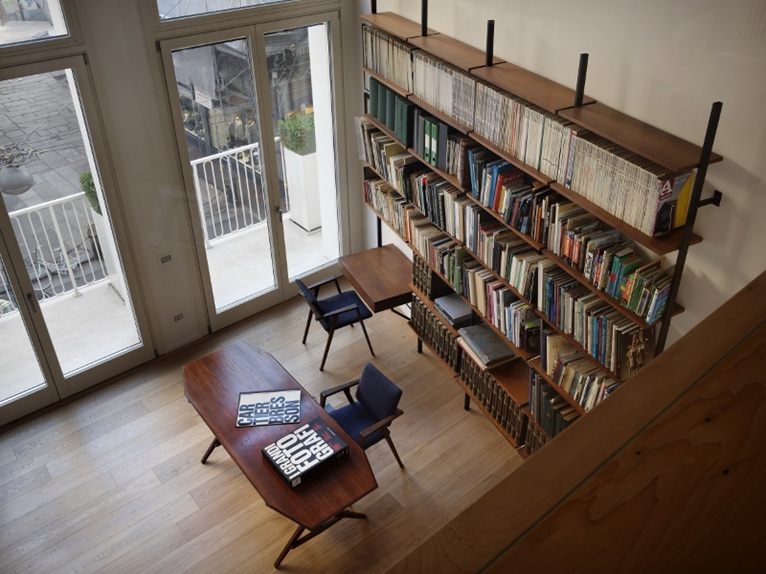 Antonella Tesei's interior design speaks of ties, with the city, work, design, her family history and nature. This small city building, between two buildings, overlooks the church of Santa Maria alla Porta to the north-east. A unique location that Antonella Tesei wanted to emphasize favouring, in each environment, the relationship with the city that offers many spectacular sights. 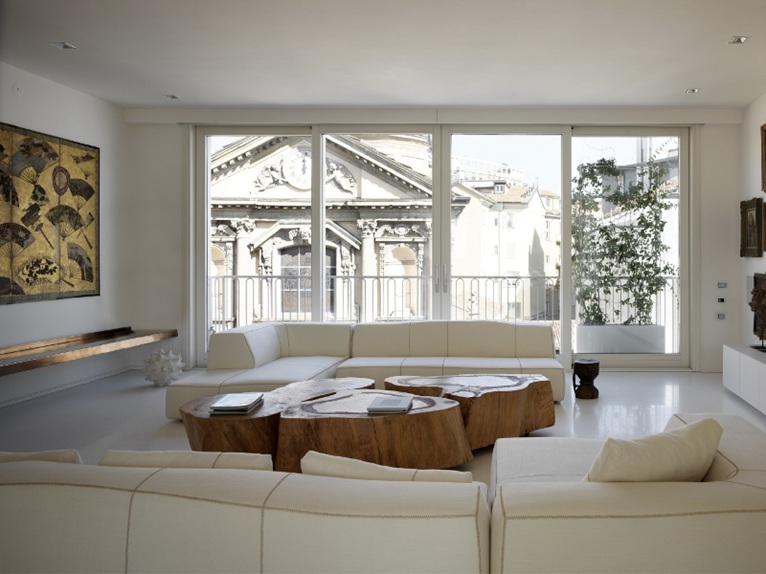 Once past the gate, based on a design by Antonella Tesei with a combination of vertical iron elements painted ivory, you find yourself in the charming path/interior courtyard similar to those of large historic buildings in Milan, with a paving slabs and blocks of granite, although on a smaller scale.

The first level of Antonella Tesei's house is dedicated to her study. Here desk, bookcase and chairs by Franco Albini dialogue through the floor to ceiling windows with the image of the Baroque church across the street. The oak floors, bright walls and the diffused light create a serene environment that promotes concentration. 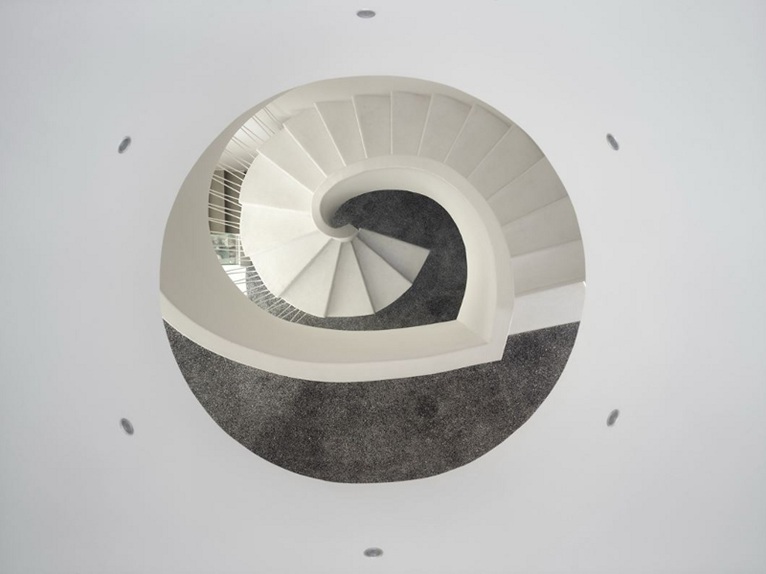 Upstairs on the second level is the sleeping area. A functional distribution, minimalist furniture and household items characterize this part of the house, where the floors are oak and Wenge. Here, too, the walls are light and ensure that objects, photographs and paintings stand out, as if they were part of an exhibition which runs throughout the house.

The living area on the upper floor, is dominated by the central spiral staircase. This, enclosed by the rhythm of the seamless thin vertical inclined and coated uprights, with slaked lime and marble dust, recalls the sinuousness of shells, suggesting a seaside evasion. Nature, which we find in the choice of materials for coatings, where natural materials are privileged, like the marble chip flooring of living room, dining room and kitchen, as well as the wood used for numerous pieces of furniture, is, therefore, always present.