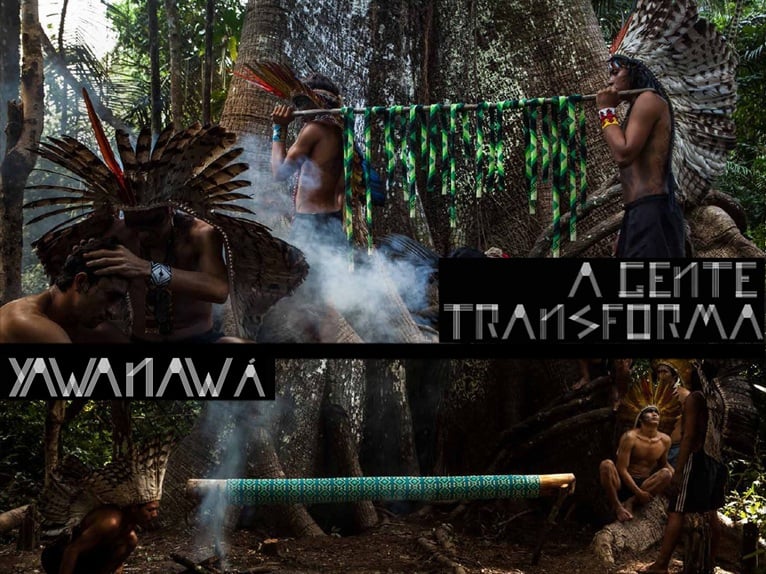 DESIGN_ These objects come to provoke. Proposing a new way of relating to making, producing and consuming. The end result of an approach that comes from what is immaterial, spiritual, respectful of knowledge rescue.

Born in the heart of the Acre forests , the AGT Yawanawà collection is the result of a co-creation between Brazilian designers and craftsmen of ethnic Indians Yawanawá. The initiative, led by Marcelo Rosenbaum, also involved Carolina Armellini and Paulo Biacchi, Fetiche Design Studio and Andre Bastos and Guilherme Leite Ribeiro, the studio Nothing Takes - also responsible for curation of products La Lampe. 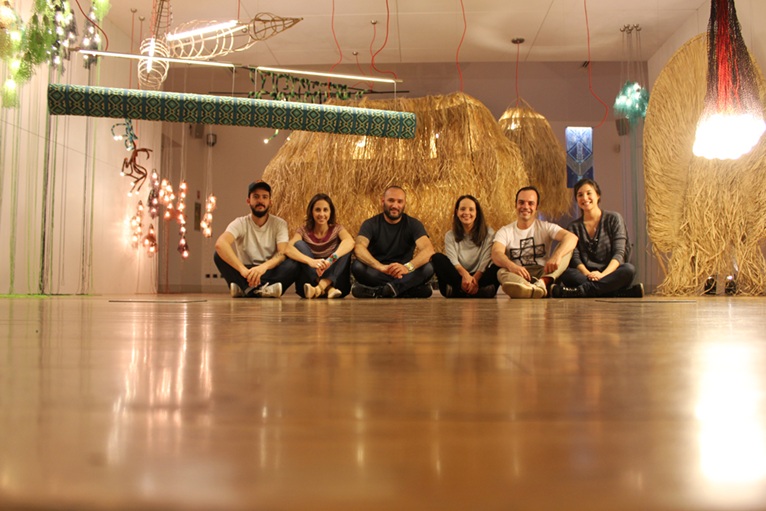 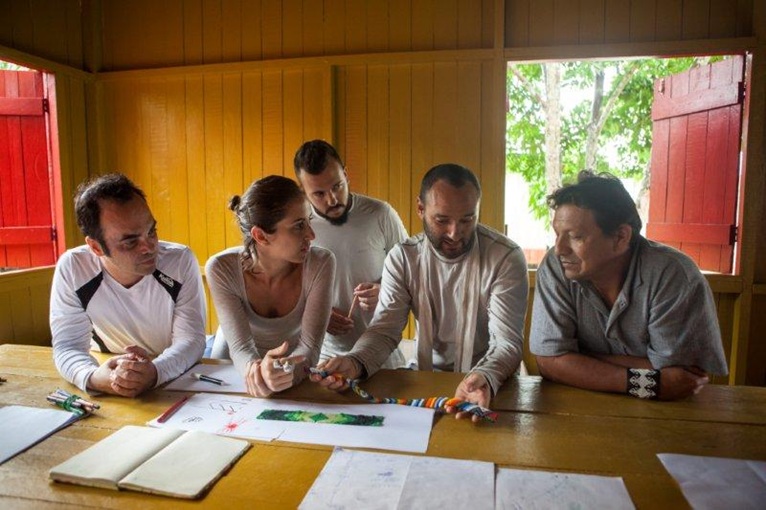 This meeting gave rise nine surprising  fixtures using in their composition materials already used in the Yawanawás crafts such as beads of glass and natural fibers.

The pieces were inspired by symbols taken from the myths and legends of the village, carrying a bit of the history of this people almost forgotten. Without leaving aside the technical precision and exquisite aesthetic of La Lampe products, the brand seeks to unite this new line with the national handicraft industrial process, spreading this cultural legacy in large scale to win the Brazil and the world. 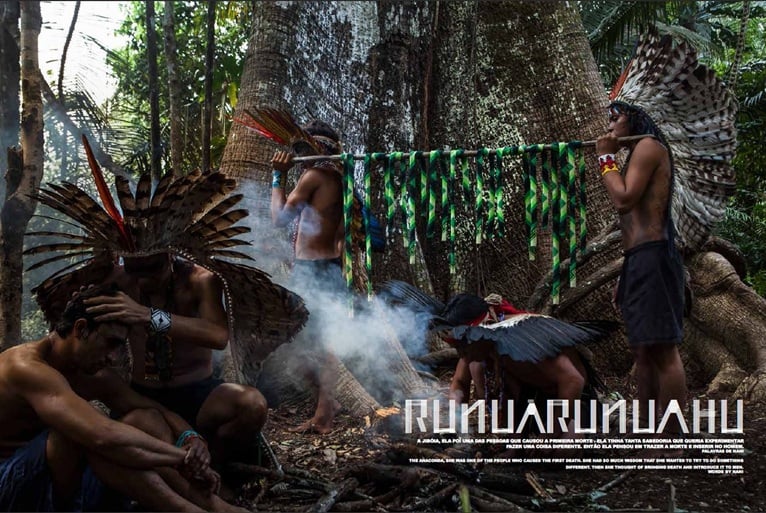 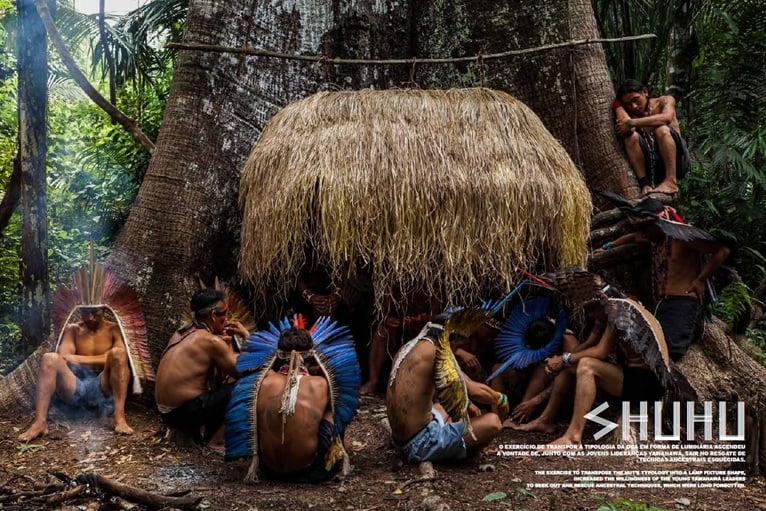 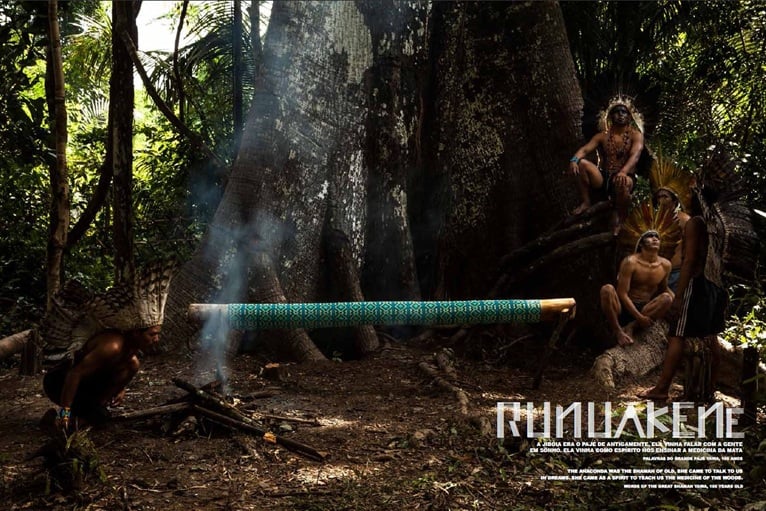 The dream is to show Yawanawá culture, not as something exotic but as the true Brazilian creative economy.

"I had a dream, which was much more than to come here to make a light fixture collection... We have much to learn from you, about how is Yawanawá culture, which undoubtedly is the greatest value you possess and we’ll turn it into product and place it in the world.

During the festival I had a vision of giant alligators and pythons made out of beads, with lights radiating from all its sides, and then I saw the alligator on a boat over the Gregório River, on his way to Milan. [...] I’m sure that together we’ll be able to show that indeed there are ways to work with indigenous people.

I believe it so much that I brought with me over thirty people, including architects, an astrologer, videographers, designers, an art director, a photographer, entrepreneurship managers, an eating habits researcher, and all of our office staff. Adding elements of your culture, knowledge and imagination to our techniques, we’ll be able to make beaded fabrics, inspired by myths and legends we’ll hear about here we’ll turn them into fantastic light fixtures. My dream is for this product to enter Brazilian homes, so Brazilians may understand and get to know a bit about Yawanawá culture, an ethnic group residing in Brazil since immemorial times. This forest we’ll create will come with us." 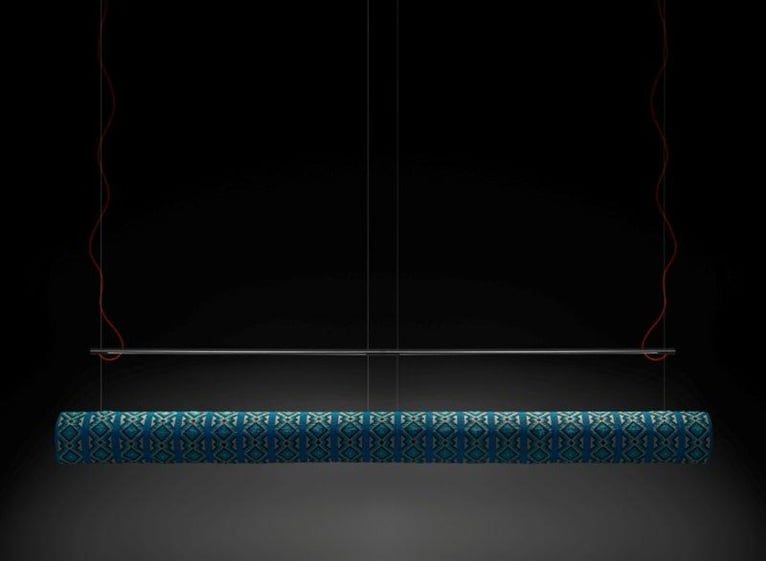 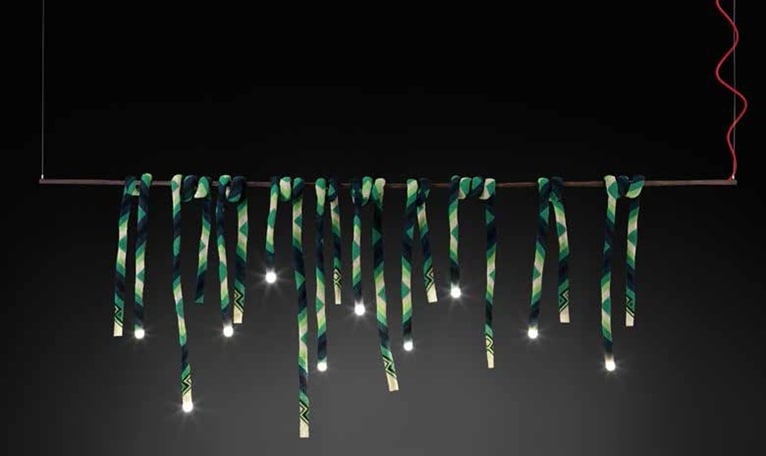 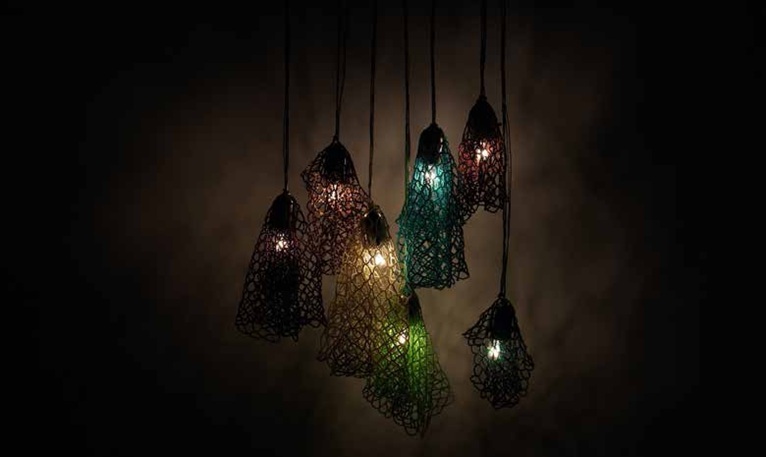 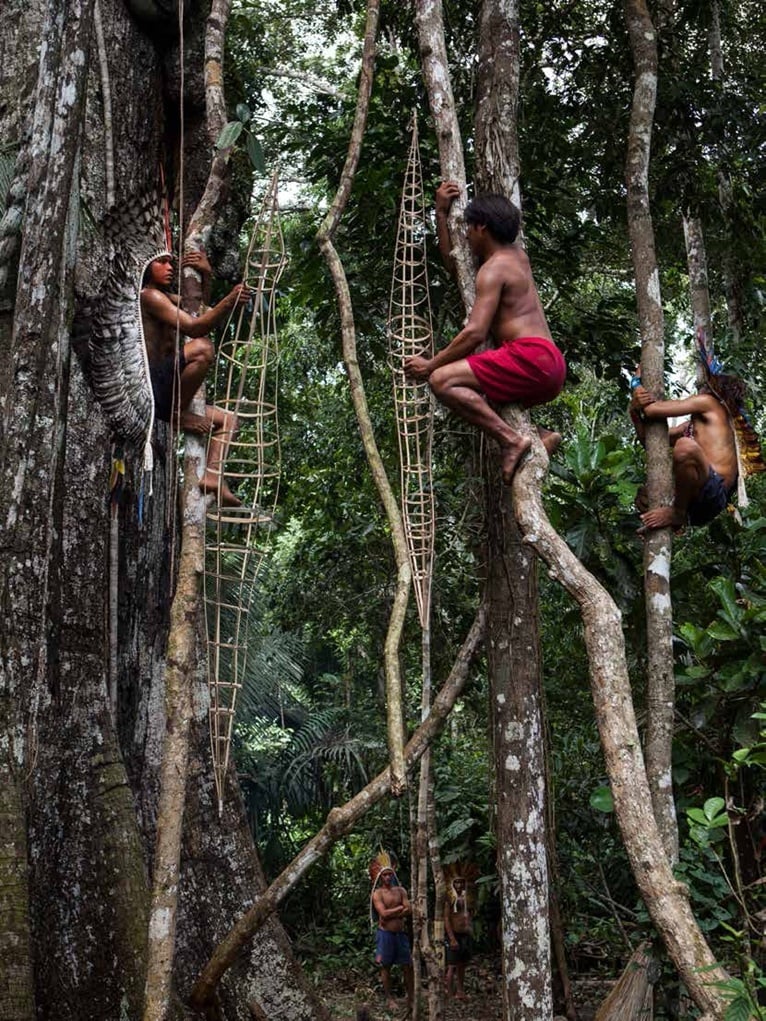 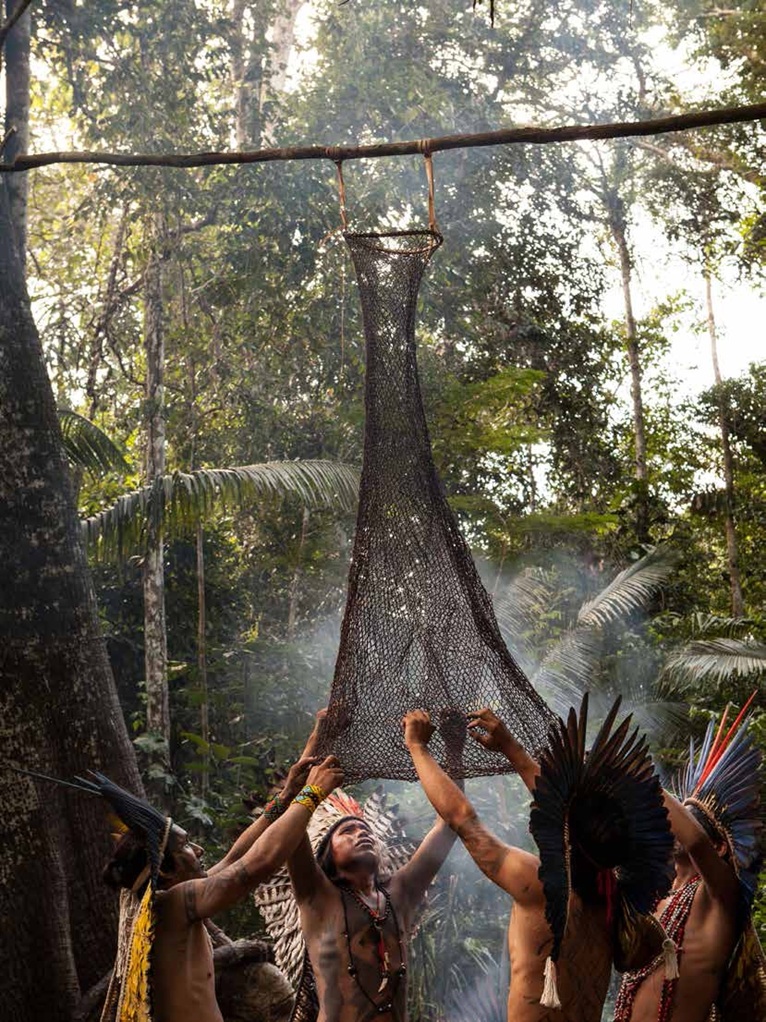 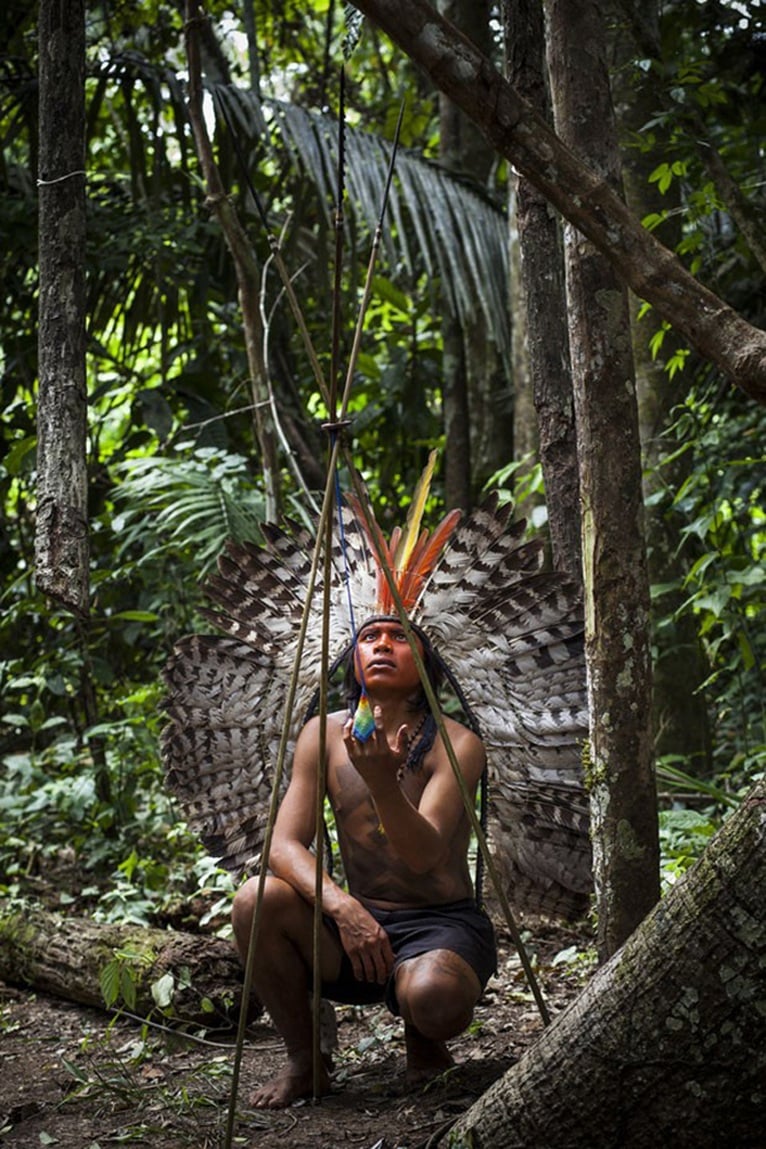 There are three design studios with completely different repertoires; each contributing with a different take from their urban luggage: cinema, exhibitions, literature, and travels. The designers first met under a mango tree while listening to stories and indigenous myths
told by Nani, one of the village’s leaders. It was through Nani that we were able to learn what the “Kenes” are. 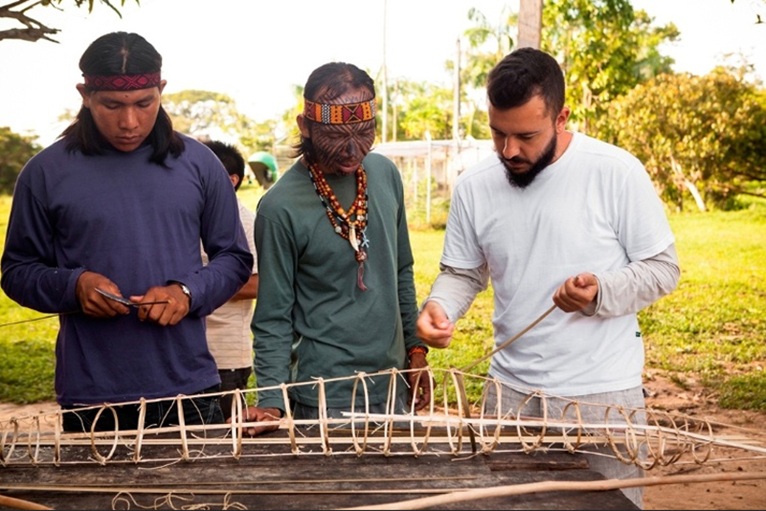 In a broad sense they are varied manifestations of all that our vision can behold, and in a more concrete sense they are the drawings and artwork expressed in body paintings and beads craftwork. Secondly, he asked artisans who were involved in working with fixtures to show us their drawings - “Kenes”. It was from those drawings, an intersection of the myths with living in the forest, that we started the first sketches. Next, the exercise to transpose the hut’s typology into a lamp fixture shape, increased the willingness of the young Yawanawa leaders to seek out and rescue ancestral techniques, which were long forgotten. We went into the forest in search of wood, vines and straw.

The co-creation work took place since the beginning with pieces that were created together, a synergy that allowed everyone to be involved and simultaneously shared their opinion, instinctively putting the principles of good design into practice. It was under this atmosphere that elements of the forest were reconstructed, with a mixture of visions and perceptions.

A GENTE TRANSFORMA - Vídeo oficial from A Gente Transforma on Vimeo.