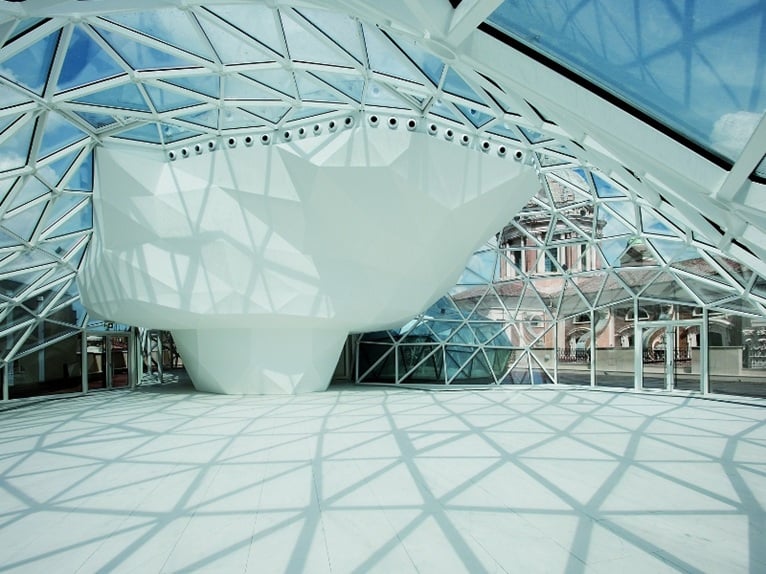 A new architectural project by Studio Fuksas redefines the urban landscape of the old city centre of Rome in a modern manner. It is the glass and steel “Lantern” of the Building of the former Unione Militare, located between Via del Corso and Via Tomacelli, which starts from the ground floor and passes through the four floors of the building before emerging from the roof of the panoramic terrace with a view over the dome of the Basilica of Sant'Ambrogio e Carlo al Corso. 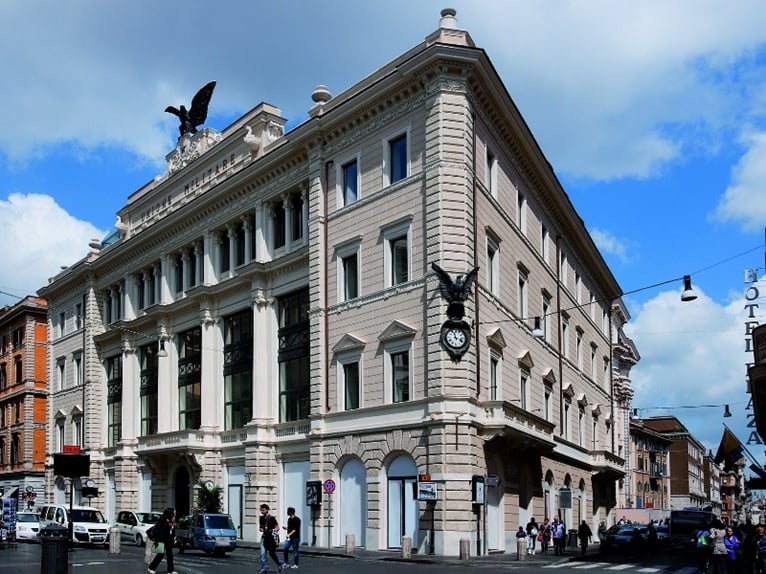 Considering the historical context in a contemporary manner has favoured a light intervention on the outside of the building, whose original construction dates back to the late 19th century, focusing the design in the interior and on the roof. The restoration of the exterior has focussed on recovering and enhancing the original architectural lines of the building. The architecture of the façades has been highlighted by a light design intervention with clean lines that gives the building a contemporary look and connects it with the city. 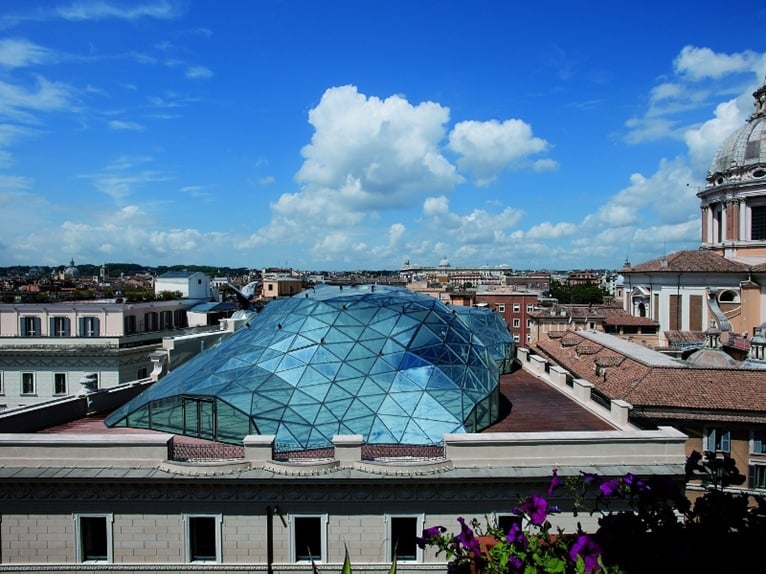 The icon of the project, the heart of the work, is the great “Lantern”. A steel and glass structure with triangular geometry that runs through the whole building that contains the vertical connections, the service rooms, ancillary rooms and some of the building systems. The floor-to-ceiling void created by the “Lantern” gives a glimpse of the various floors throughout the structure connected to one another by walkways. 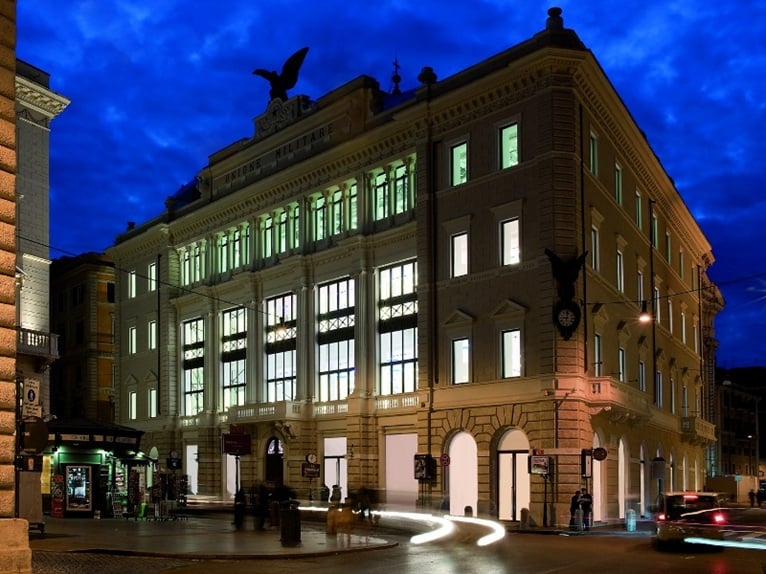 The roof of the “Lantern” reaches a maximum height of 7.50 meters from the floor level and houses a panoramic space of approximately 300 sq.m. From the vantage points of the city the “Lantern”, flooded by natural light, appears like an irregular mirror or an icy lake, while at night it lights up like an enormous lantern. In the evening the building's façades are illuminated and become like a theatre stage, the mood changes and the audience outside can watch the show of lights and colours inside. 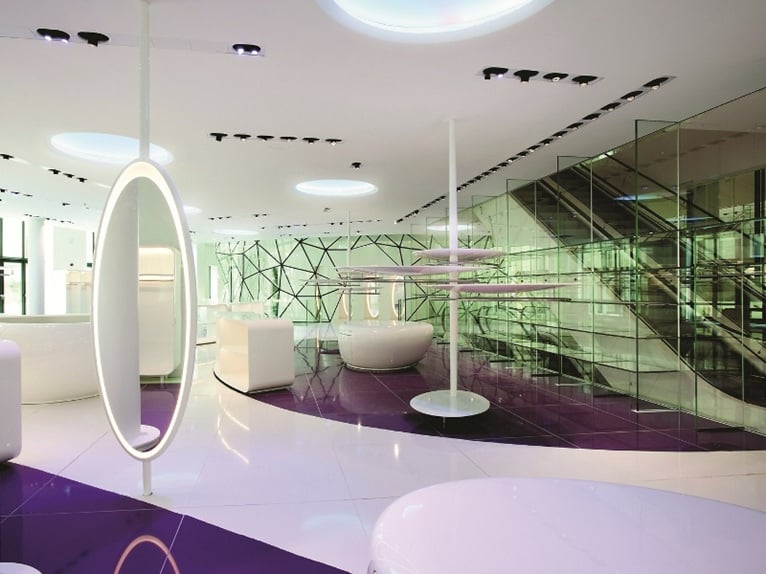 Each floor opens a unique space to the public characterized by floors decorated with “bubbles” of differing size and colour, in shades of red, orange, purple on a white base. The ground floor, designed to accommodate a large bazaar full of colours, objects and accessories is a large open and permeable space that connects via Tomacelli with the adjacent square. 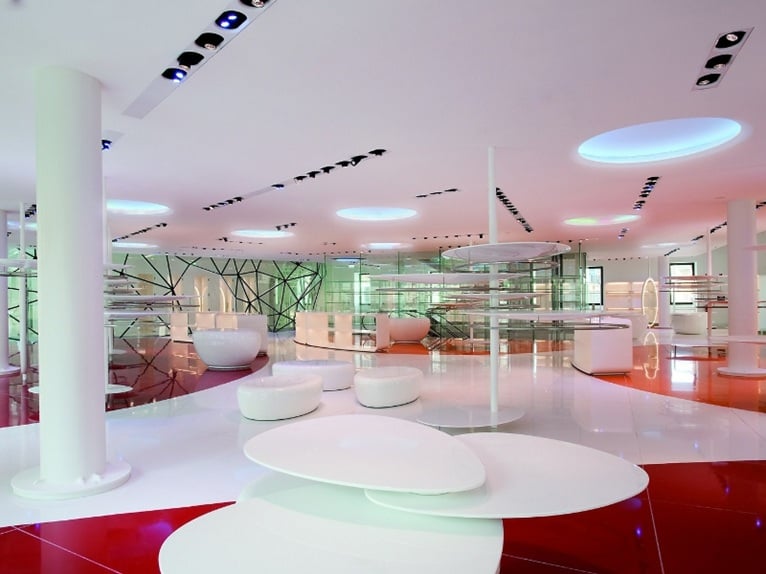 The furnishings designed by Fuksas were conceived as playful elements inspired by children's toys. They are sculptural objects with flowing lines mainly made of shiny white fibreglass. Tables, desks, pouffes, display units, spinning tops for clothes and accessories that blend harmoniously into the showrooms. The tops fan open like petals as if they were artistic installations. Oval-shaped mirrors reflect the furniture, the lights and colours as one. The “Lantern” acts as a backdrop, opening to the passage onto each floor. The false ceilings are lit by means of a spectrum of colours that recall those of the floors. A staircase with glass steps illuminated by LEDs and with mirrored surfaces connects and enhances the space.

At the basement level, following the preliminary digs, a tomb dating from the first half of the second century BC was unearthed. The tomb looks like a tuff stone block and travertine stone sheet structure with a podium over four and a half meters high on which the cell, which was partially covered, rests. The front facing via Tomacelli is an important detail, as the current road corresponds to the ancient road leading to the “Portus Vinarius” on the river Tiber. To preserve and enhance the exhibits, a glass floor  was created to give visitors a glimpse of the archaeological remains.