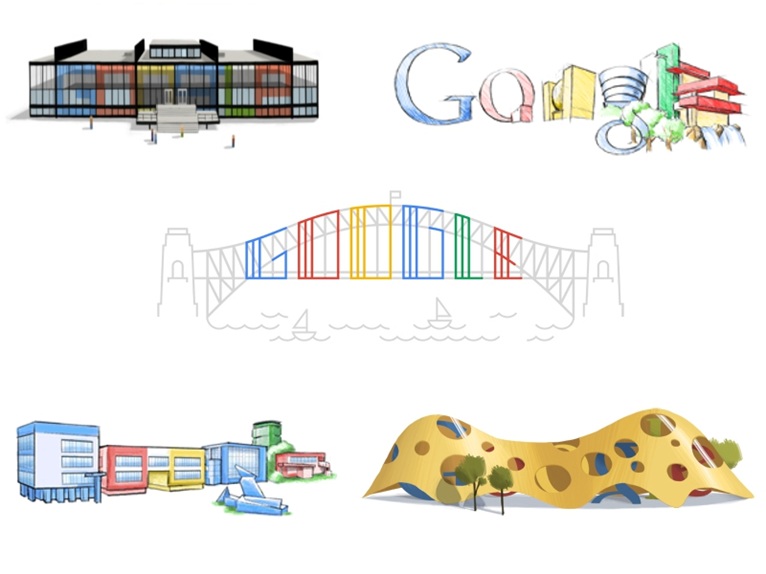 GRAPHIC _ Today the Google doodle is dedicated to the birthday of Spanish architect Antoni Gaudi (25 June 1852 – 10 June 1926). I found out more around the web about the history of the funny sketches that lighten up our arrival to the office every morning.

Doodles are made to the Google logo to celebrate holidays, anniversaries, and the lives of famous artists, pioneers, and scientists. In 1998 the concept of the doodle was born when Google founders Larry and Sergey played with the corporate logo to indicate their attendance at the Burning Man festival in the Nevada desert.

While the first doodle was relatively simple, the idea of decorating the company logo to celebrate notable events was born.
Two years later in 2000, Larry and Sergey asked current webmaster Dennis Hwang, an intern at the time, to produce a doodle for Bastille Day. It was so well received by the users that Dennis was appointed Google's chief doodler and doodles started showing up more and more regularly on the Google homepage.

Over time, the demand for doodles has risen in the U.S. and internationally, the team has created over 1000 doodles for the homepages around the world. Antoni Gaudi's doodle is just the latest set aside to the architecture world, we selected the best ones from the last few years among birthday, celebrations and anniversaries.

Henry van de Velde's 150th Birthday (3 April 1863 – 15 October 1957) was a Belgian painter, architect and interior designer. He could be considered as one of the main founders and representatives of Art Nouveau in Belgium. Van de Velde spent the most important part of his career in Germany and had a decisive influence on German architecture and design at the beginning of the 20th century_Apr 3, 2013

Antoni Gaudi's 161st birthday (25 June 1852 – 10 June 1926) was a Spanish architect born in Reus, in the Catalonia region of Spain and leader of Catalan Modernism. Gaudí's works reflect his highly individual and distinctive style and are largely concentrated in the Catalan capital of Barcelona, notably his magnum opus, the Sagrada Família_ Jun 23, 2013

[Mies van der Rohe's 126th Birthday (March 27, 1886 – August 19, 1969) was a German-American architect. He served as the last director of Berlin's Bauhaus, and then headed the department of architecture, Illinois Institute of Technology in Chicago, where he developed the Second Chicago School. He is widely regarded as one of the pioneering masters of modern architecture _ Mar 27, 2012]

Jan Kaplický's 75th Birthday _ (18 April 1937 – 14 January 2009) was a world-renowned Czech architect who spent a significant part of his life in the United Kingdom. He was the leading architect behind the innovative design office, Future Systems. He was best known for the futuristic Selfridges Building in Birmingham, England, and the Media Centre at Lord's Cricket Ground in London_Apr 18, 2012

Brasilia's Anniversary_This doodle was a co-creation between Oscar Niemeyer, who is one of the city of Brasilia's most important architects, and his grand-grandson, Paulo Sergio. Together they took Niemeyer's original drawings for the city and digitally crafted them into the Google logo_Apr 21, 2012

Sir George Gilbert Scott's 200th Birthday_ (13 July 1811 – 27 March 1878) was an English Gothic revival architect, chiefly associated with the design, building and renovation of churches and cathedrals, although he started his career as a leading designer of workhouses. He was one of the most prolific architects which Great Britain has produced, over 800 buildings being designed or altered by him. _Jul 13, 2011

This is the personal doodle that our graphic designers created to celebrate our network. [credits: Francesca Schioppo and Rossella Tursi]