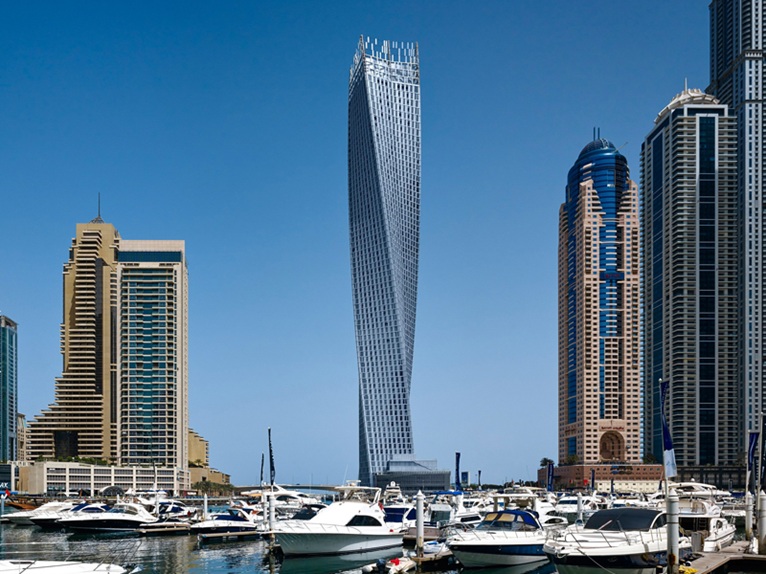 The dramatically rising helix of the 75-story building provides a distinctive landmark on the city’s storied skyline. The 1,010- feet (307-meters) tall reinforced concrete structure rotates a hexagonal floor plate around a circular core—with the top offset 90 degrees from the base. The shift maximizes views for each of the 495 apartments.

“The lower portion of the tower is oriented toward the exciting waterfront promenade of Dubai Marina, while the upper floors are rotated to face the Gulf,” SOM Design Director Ross Wimer says.

“Cayan Tower adds to SOM's significant impact on Dubai's 21st century skyline,” SOM Consulting Partner George Efstathiou says. “Its elegance, technological innovation and sustainability are hallmarks of our storied 75 year history. It takes its place with our finest designs, including the nearby Rolex Tower and Burj Khalifa.”

The corner and interior columns twist as they ascend, but most of the perimeter columns have an identical shape and tilted relationship to the floor plate. They are simply shifted, a bit more than a single degree, from floor to floor—resulting in a standardized construction method typical to most concrete structures.

Mechanical, electrical and plumbing systems are located in the core or within a zone between the central circulation corridor and the residential units, allowing straight vertical paths for these systems as the relationship between the apartments served varies between floors. The shape of the tower is not only aesthetically unique but it serves a structural function as well. Its twisted shape greatly reduces wind forces on the tower and “confuses the wind” in a way that wind forces cannot organize themselves.