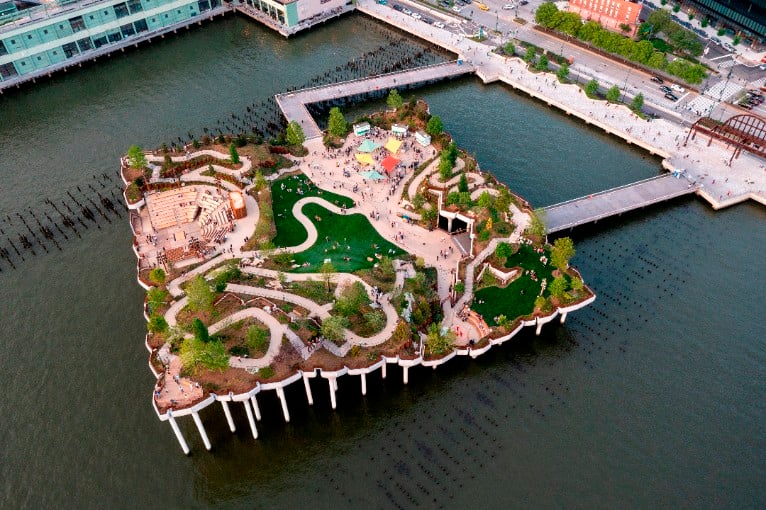 Heatherwick Studio, MNLA, and ARUP has announced the opening of Little Island, a 2.4-acre urban park and performance venue, situated above the Hudson River in New York City.

Owned by the Hudson River Park and designed by the London-based Heatherwick Studio and the New York-based landscape architecture firm MNLA, the opening of Little Island is the culmination of over 8 years of planning, development and construction.

Designed as a haven for people and wildlife, it is a green oasis, held above the water by sculptural planters, and located just a short walk across a gangplank from Manhattan’s Lower West Side. 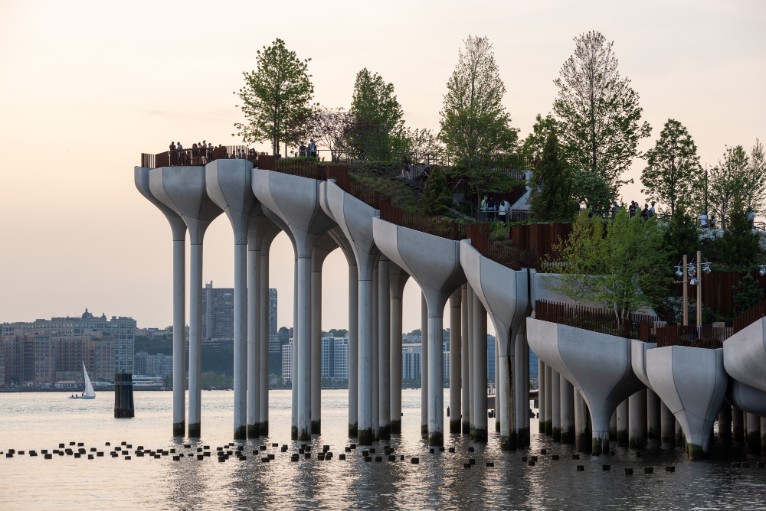 Thomas Heatherwick, Founder of Heatherwick Studio said:
“The project began when we were asked to conceive of a sculptural structure to go on a design for a newly enlarged piece of the Hudson River Park promenade. The project was interesting, but we saw the opportunity to create a more engaging experience for New Yorkers and to build on the city’s heritage of inventing exciting new public spaces. Instead, we had the idea to make an entirely new type of pier as a lush rectangular garden island, connected to the land with generous gang-planks as bridges, aligned to the street grid of New York.
As well as making multiple spaces for different activities and performances, this new public space could also take advantage of the water to create a more meaningful threshold that allows visitors to feel they’re having a break from the hecticness of the city. 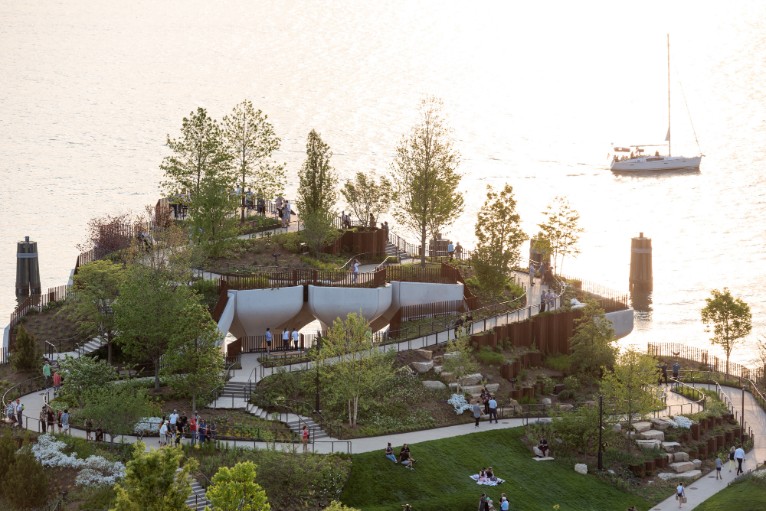 Typically pier structures are always flat, but we saw this as an unmissable opportunity to lift the surface to create a topography that would make a more dynamic social experience for visitors and give great sightlines for performing spaces and lookout points over the river and back towards the city. Also, typically, piers are composed of structural piles that go down into the river bed with slabs that cover them to make a surface. However, we were inspired by these piles and the civil engineering required to build structures that are able to withstand extreme river conditions. Could we make these the heroes of our project, rather than hiding them?
The vision that’s been built is based on taking these piles and turning their tops into dramatic planters that fuse together to make a richly-planted undulating landscape.
Our intention has been to make an exciting space that is free for everybody to come to, that treats the river as part of nature as well as plants and even each other.” 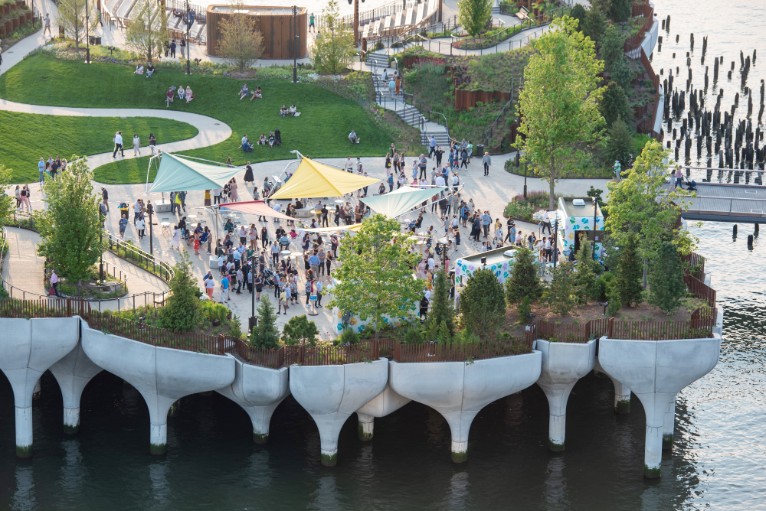 The planters, or ‘pots’ are filled with soil and planted with more than a hundred different species of indigenous trees and plants, which encourage biodiversity and are able to thrive in the waterside climate of New York. To determine the pots’ form, the design team looked to nature, and the mosaic of ice that forms around the wooden piles when the river freezes. The studio reinterpreted this in a tessellated pattern that appears organic, but uses repeated elements that could be standardised for fabrication. The precast components were fabricated locally and then transported by boats and assembled on site, minimising disruption to the city. 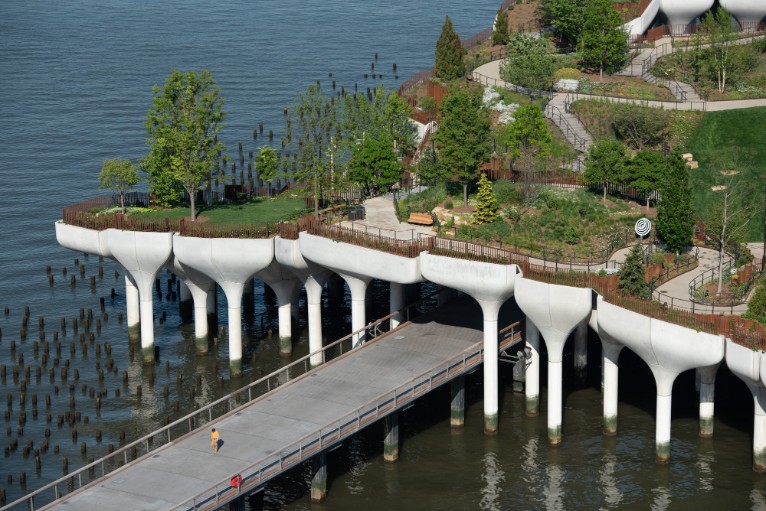 Access to the pier is via two accessible ‘gangplanks’, covered in timber planks and oriented in a continuation of New York’s street grid. Inside, paths wind through trees and grassy seating areas to hidden, unexpected views. Restoring the entertainment venue that was lost when Pier 54 fell into disrepair, the park integrates three performance spaces: an acoustically-optimised 700-seat amphitheatre, a more intimate 200-seat spoken word stage, and a flexible venue with capacity for 3,500 at the centre. 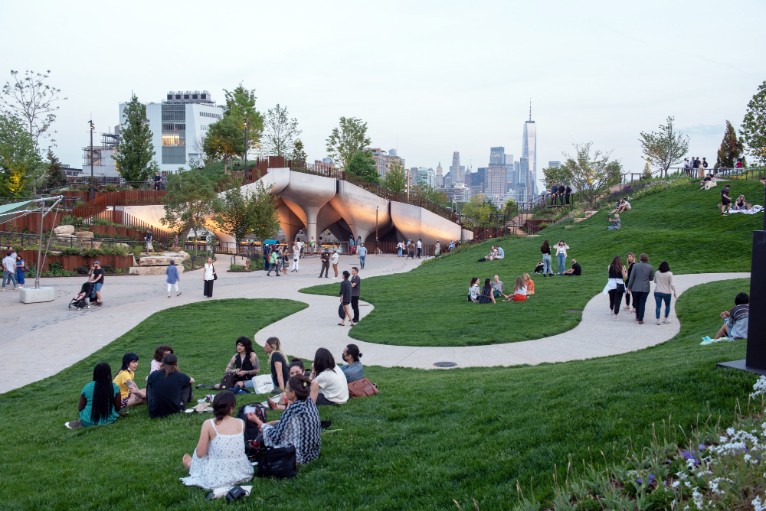