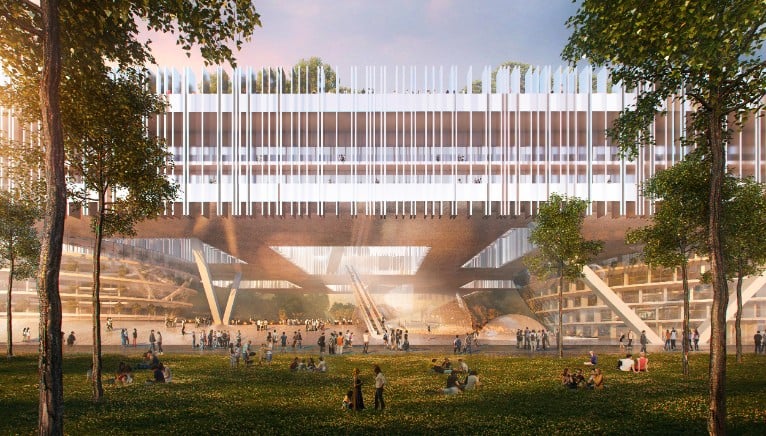 French studio Dominique Perrault Architecture and local architect Zhubo Design are set to design a university campus with a 700-metre-long building for the Shenzhen Institute of Design and Innovation.

The new campus of the Shenzhen Institute of Design and Innovation will form one of the new sites of the Southern University of Science and Technology (SUSTech), which was established in 2011, and will accommodate about 4,000 students. This project demonstrates the city’s ambition to create a high-level international school in response to an increasing demand for talents in the field of design, in Shenzhen and the Guangdong-Hong Kong-Macao bay. Among 37 successful teams selected through the open application process, nine were shortlisted to participate in the design competition, including renowned offices such as MVRDV and Studio Libeskind. 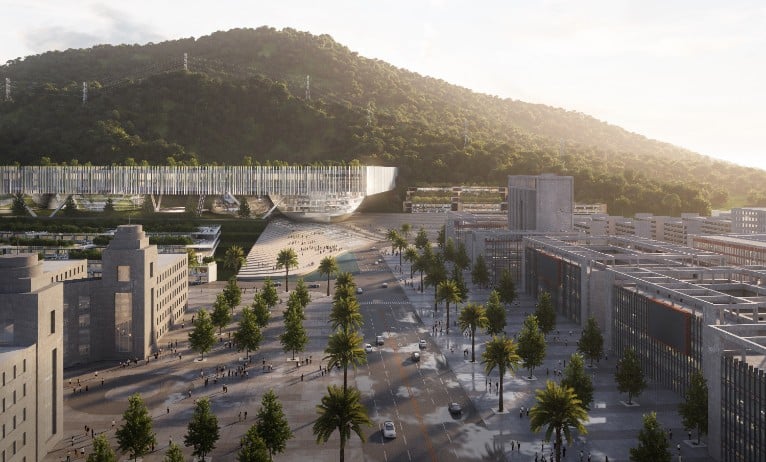 The site chosen for the new campus is located on the outskirts of Shenzhen, in a still mainly rural area, along the mountain relief of the «Phoenix Mountain.» The project is integrated into the landscape, and preserves the legibility of its horizontal structure, ensuring that no prominent architectural element would disturb this «plateau» geography.
Inspired from the Chinese caracter «--», reflecting the athmosphere of a line of mountain and water, it creates a large-scale landmark, a horizontal line in the the site, detached from the ground like a large bridge, and develops a builtfrontofmorethan700meterslong.Hungabovetheground,the main volume maintains visual transparency at pedestrian level, and its compact height guarantees views towards the great landscape. Above the natural ground, it creates a protective shelter, hosting public spaces and gardens, punctuated by «domes» housing various easily identifiable academic functions. The functional organization of the campus is simple and intuitive, articulated around two main elements: the «Hyper-Ground» and the «Hyper-Roof». 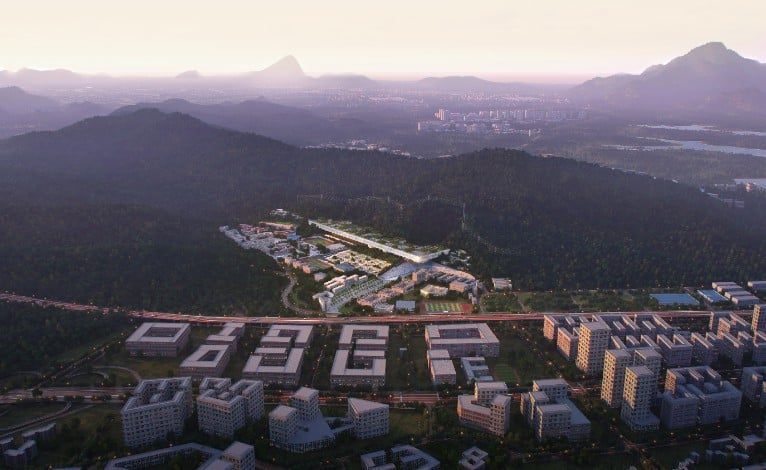 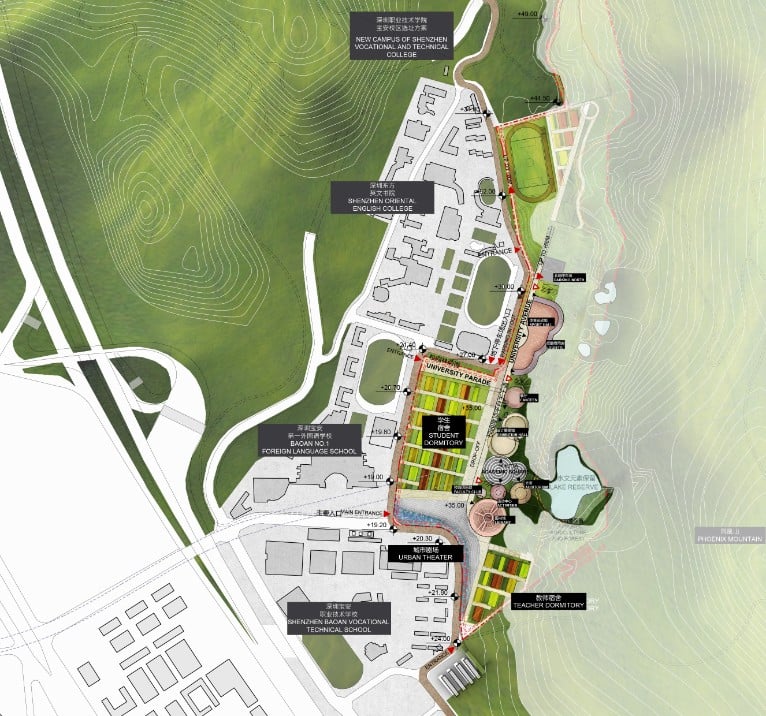 The students and professors housing consists of several «villages», offering a terraced architecture with patios. These groups of housing units set in the topography, with their green roofs, are reminiscent of traditional layout of the hillside terraces, and their patios are a reference to the traditional Chinese composition of housing. 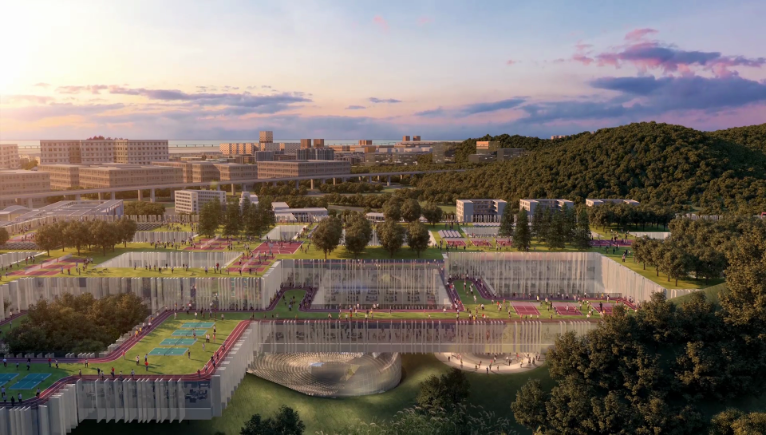 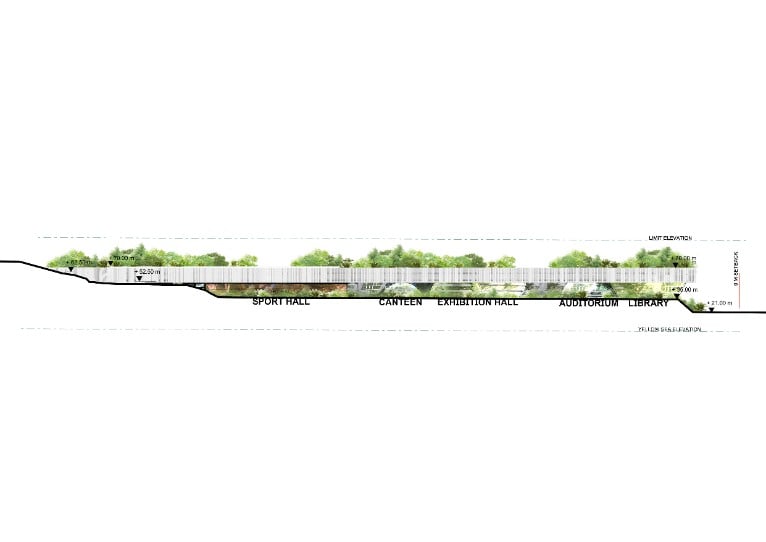 The preferred materials are metal and glass. Punctuated by thin vertical lines of light metal, the large windows provide a natural lightning for all the working spaces and wide views of the landscape. The vibrations of the envelope, between the white and emerald tones of glass metal, will constantly vary its appearance, so that the building will be perceived differently depending on the angles of approach, the seasons or the time of day. The reflections unify the composition and preserves the interior activity from outside views.
Finally, the constructive principles and the arrangement of the spaces allow great flexibilityintheinteriordesignandthepossibility of imagining possible future developments of the campus. 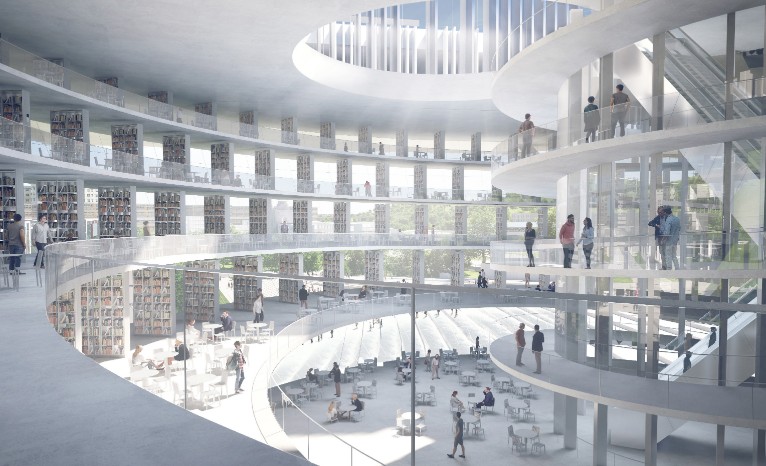