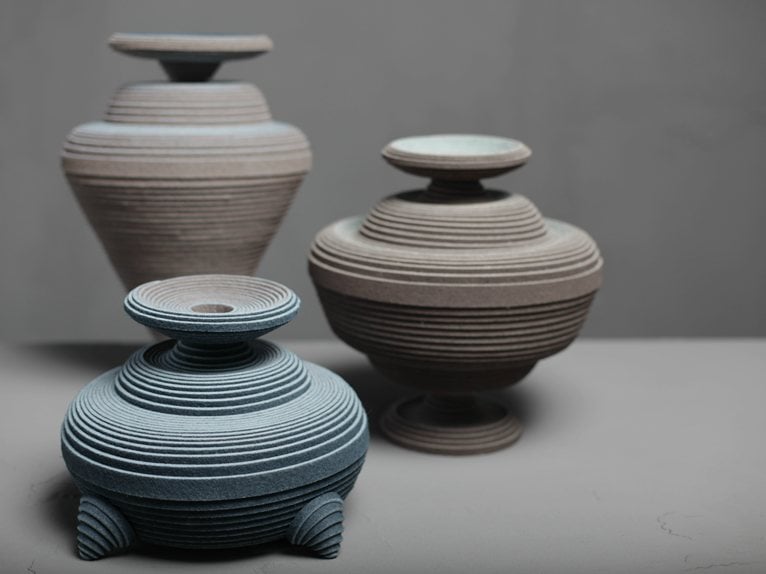 Siba Sahabi is a poetic designer. Drawing from her German/Iranian roots, Siba’s work aims to show how one culture can influence another, leading to renewal and cultural richness. Her designs are inspired by the Europe an and Middle Eastern history of ceramics. A passion for crafts and imperfection drives the process of Siba’s work. Siba’s studio is based in Amsterdam, the Netherlands.

This year Siba Sahabi presents its products at Tuttobene'e exposition in Milan. 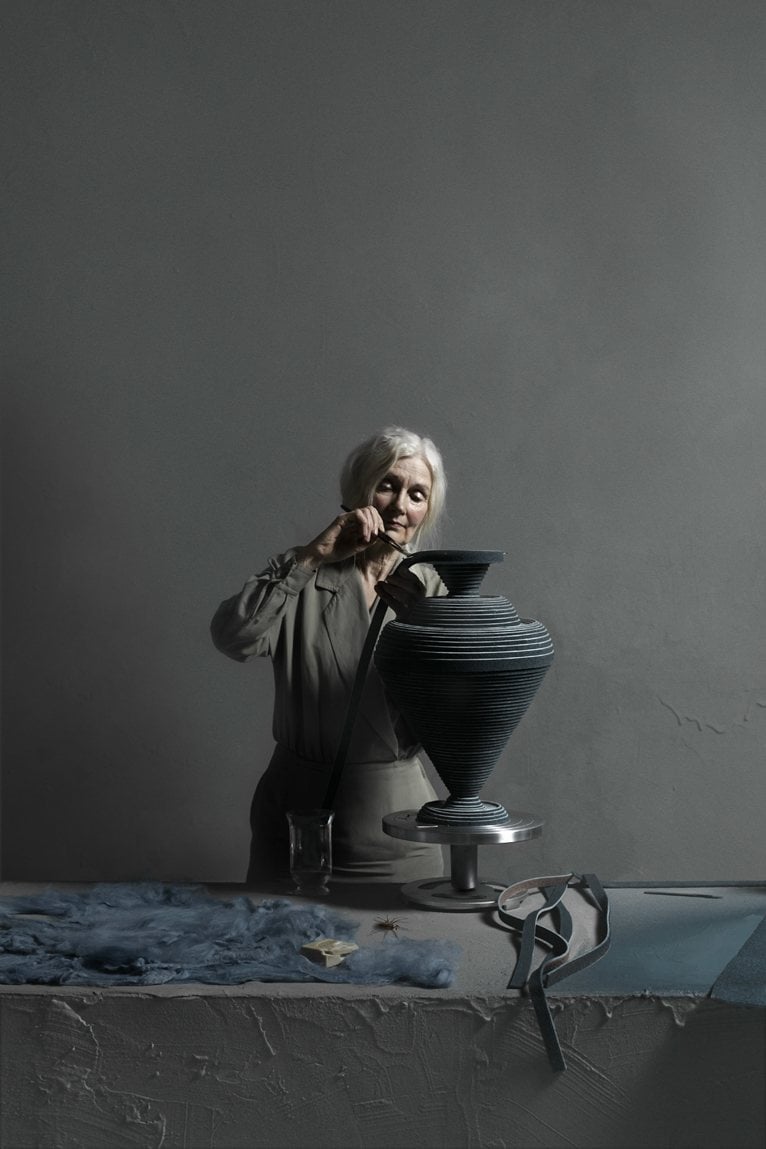 Between Two Rivers is the ancient Greek translation of the term Mesopotamia, the cradle of Western civilization and birthplace of the pottery turntable. Through ten sculptural felt vessels Siba makes the connection between this ancient land - located between the rivers - with its pottery innovations and Western ceramics culture which developed through these new technologies. 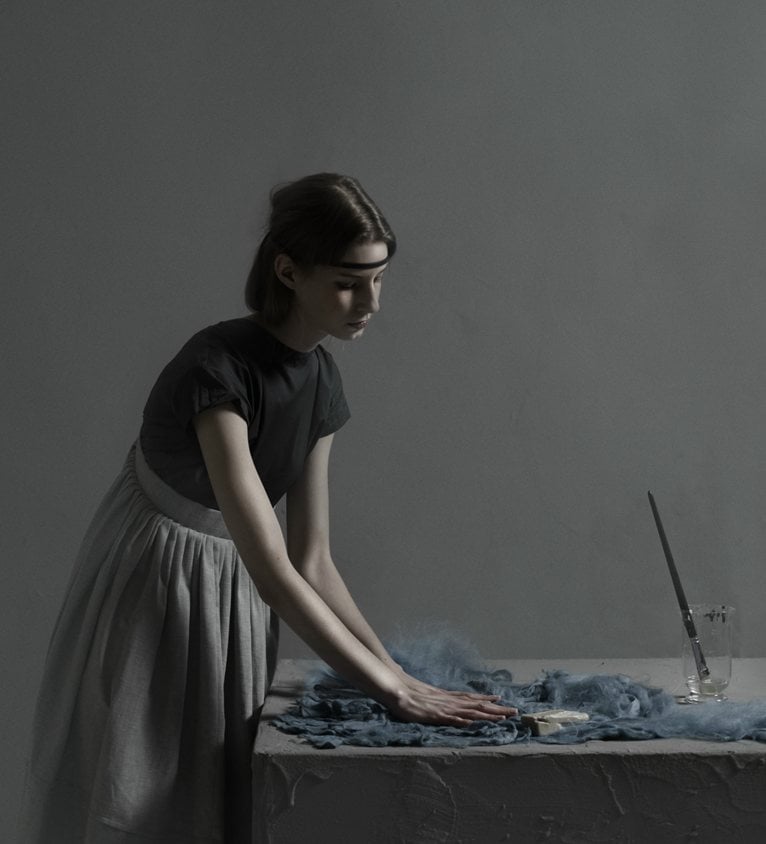 The turntable, that aided potters to design circular objects more accurately and faster, was invented in 3500 BC in Ur, an ancient Mesopotamian city-state located in modern Iraq. Around 2200 BC this invention was introduced in Greece and thus sparked a new style of Greek ceramics called Minyan pottery which Siba has reinterpreted in her ​​felt sculptures. 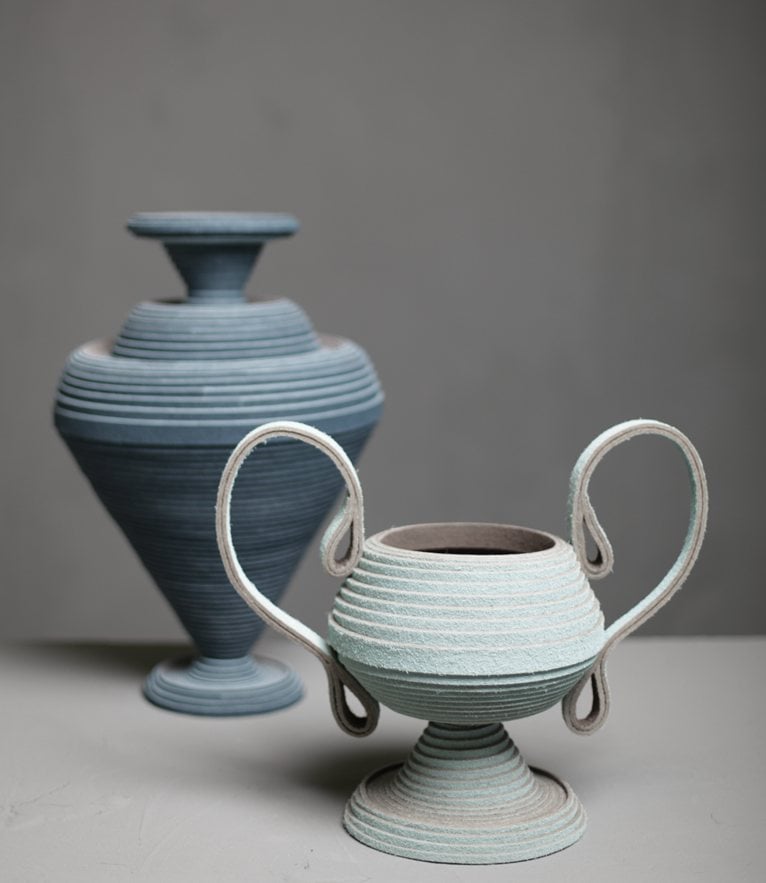 A circular, ribbed finish is one of the distinguishing characteristics of Minyan ware which reflects its production process on a potter’s turntable. Although the turntable no longer plays a significant role in the production of modern large-scale pottery today, the appearance of hand-turned ceramics is often imitated by producing circular shapes with fine ridges. 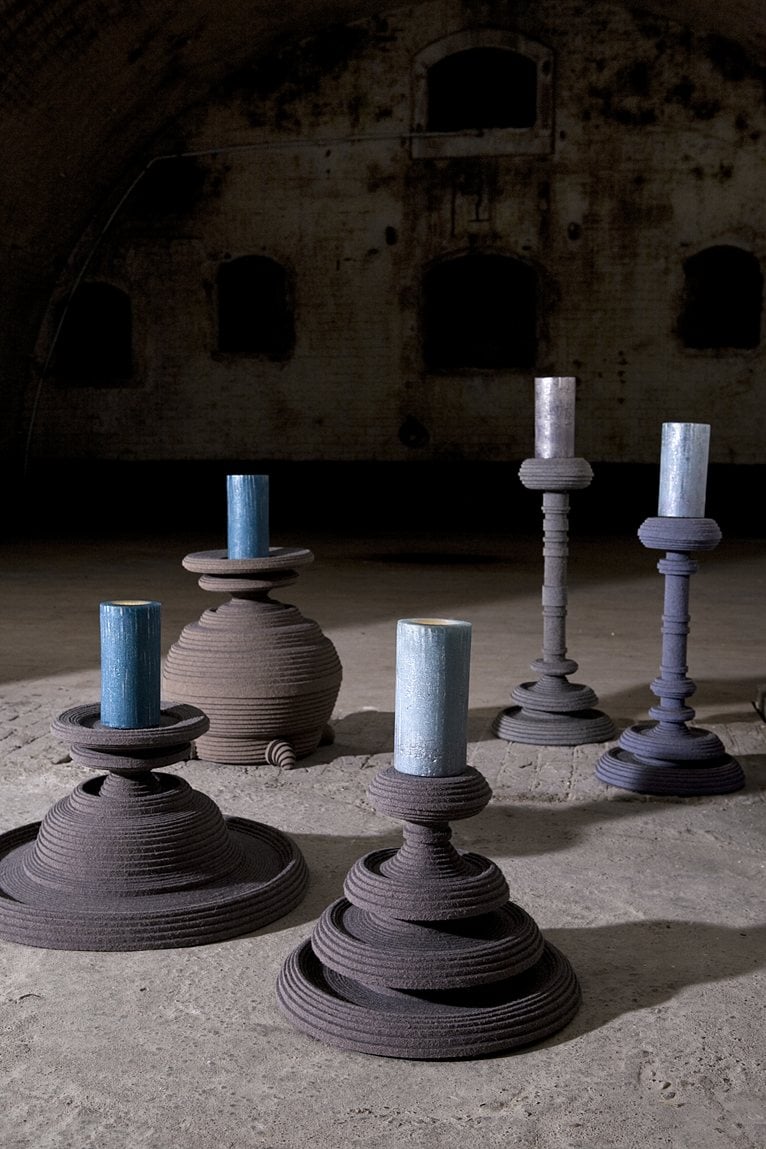 Istanbul Twilight comprises nine candleholders, made of felt, dedicated to the metropolis that connects Europe and the Middle East. The shape of the candleholders are directly inspired by the silhouette of Istanbul. The use of colours reflect different shades of light on city facades at dusk and dawn.

Choice of material is based on a certain characteristic of wool: it doesn’t catch fire. The felt is cut into long strips and then coiled by hand into circles, like a snake. The candleholders are completed with a candlepin. 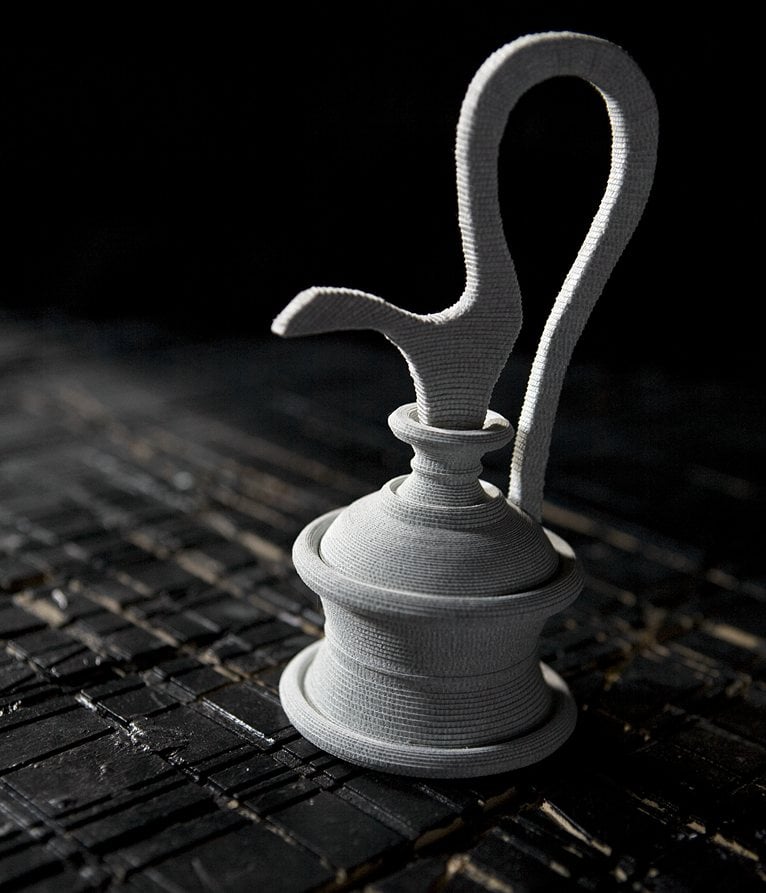 Kerameikos is an area of Athens, which used to be the potters' quarter of the city for centuries. The word ceramic derived from this district. The ancient Greek ceramicists developed an aesthetic style that is characteristic for their sophisticated culture. Nonetheless the Athens’ craftsmen got their inspiration from foreign objects. These items of daily and ritual use were discovered via trade and made of more valuable materials like the Egyptian Alabastron (perfume bottle made of alabaster), the Persian Rhyton (drinking vessel made of horn), the Lydian Lydion (metal jar for anointing oil) and the Etruscan Kyathos (metal cup). 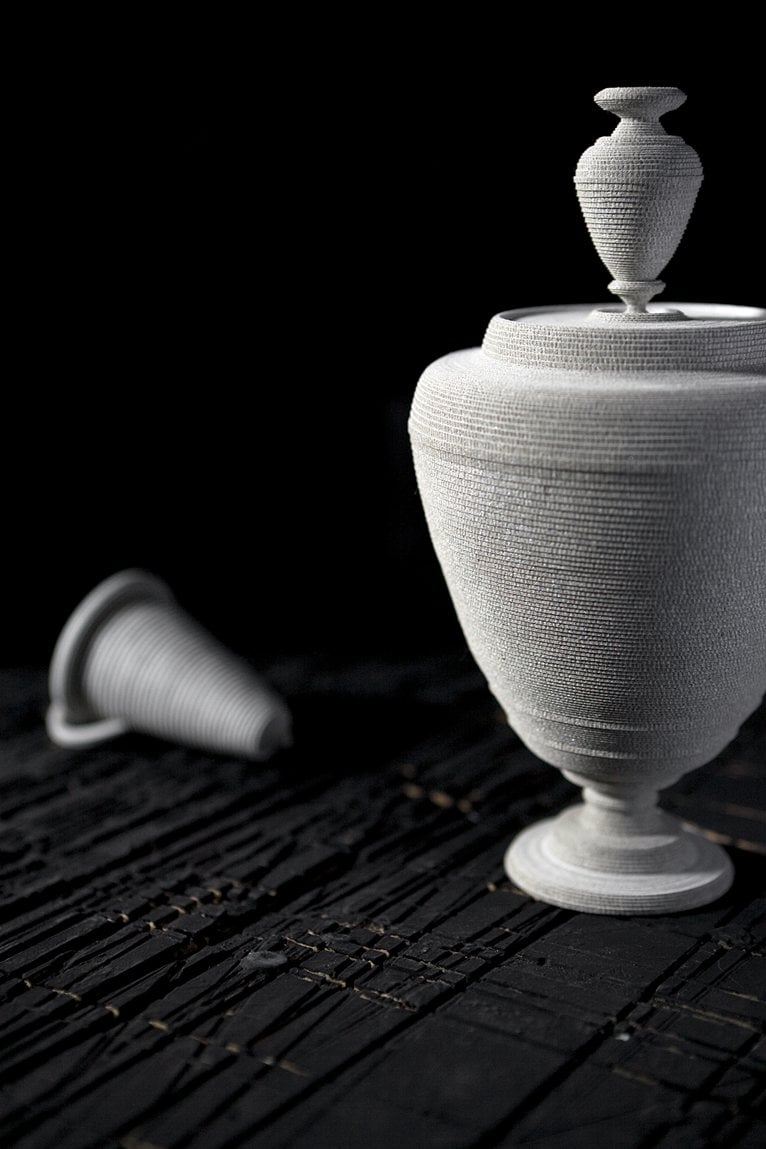 The value of the antique Greek items nowadays is no longer based on the price of the material itself but on the aesthetics and artistic skills. 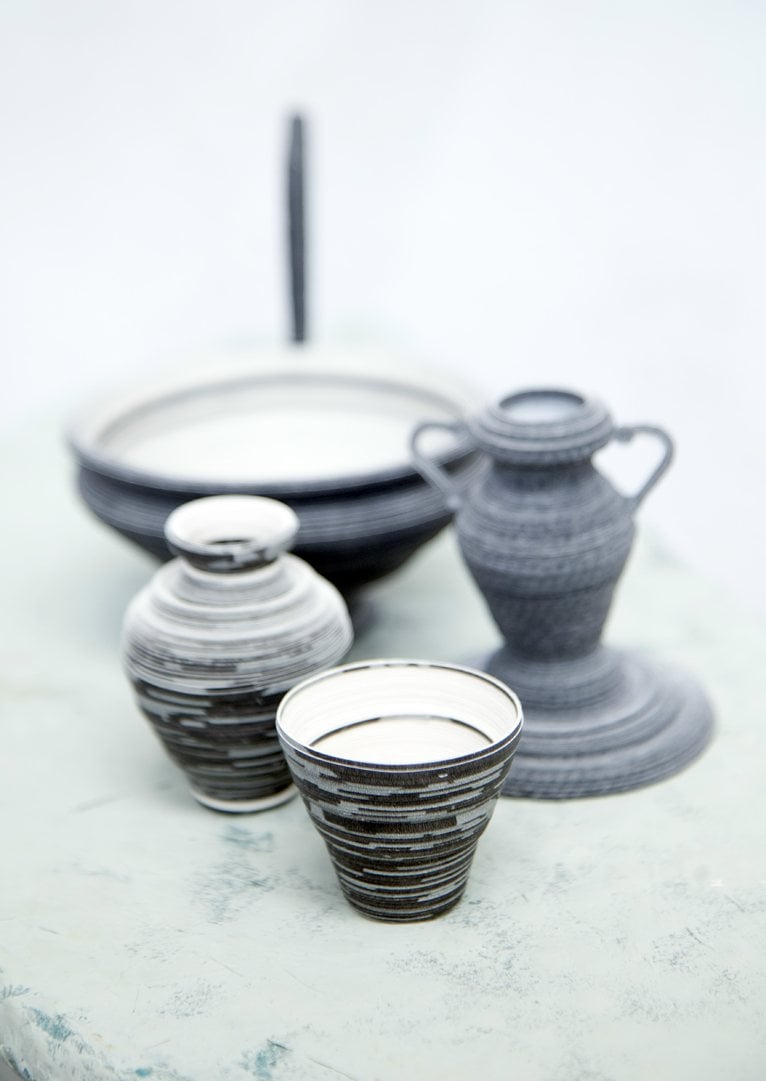 The series of paper vessels takes inspiration from characteristic black Etruscan ceramics. The carafes, goblets and cups are handcrafted from wallpaper used for its strength and resistance to light. The Etruscan was a folk that lived 800 to 100 B.C. in the Toscana. Their so-called Bucchero ceramic is black because the pottery was fired in an atmosphere charged with carbon monoxide instead of oxygen. This technique is know as reducing firing and leads to a shiny metallic look. The Etruscan imitated oriental metal works that were imported from Cypress and Phoenicia (modern day Lebanon and Syria). In this means Western knowledge of porcelain production was combined with Eastern sense of aesthetics. This is a example of how one culture has influence on another one leading to renewal and cultural richness. 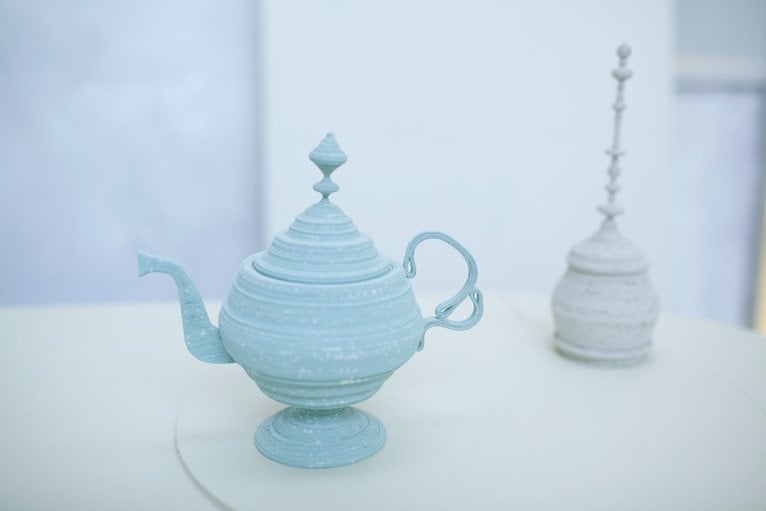 Siba Sahabi has fashioned an exquisite Moroccan tea set out of paper which was inspired by the tea dance of colonial days gone by. Tea Dance refers to Western interpretations of Eastern customs. In polite Moroccan society, ladies were asked to perform dances to amuse guests who had been invited for tea. French colonial families adopted the idea, and a gentle waltz around the tea table became the fashion. The ritual then travelled from Africa to Paris, and London followed by America. The tea dance grew in popularity during the 1920's and 30's. 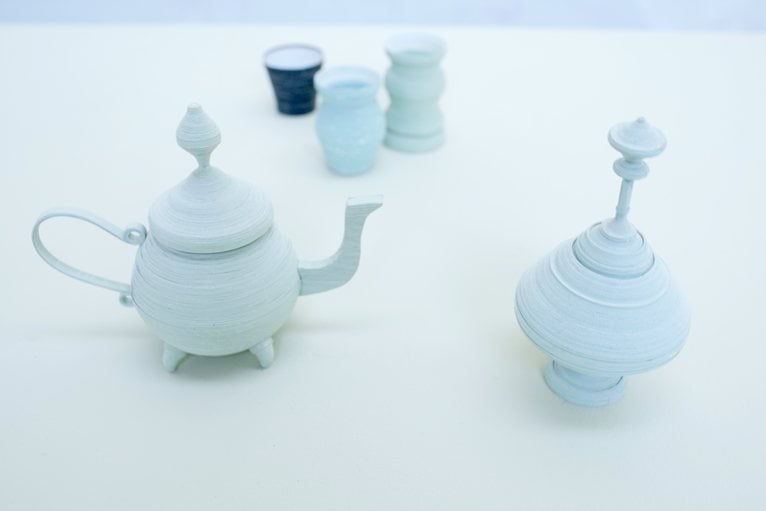