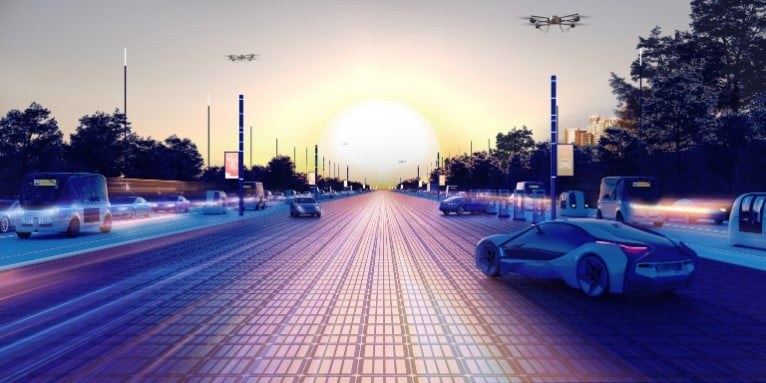 How will urban highways look like in 2050? Can they be transformed from urban and social barriers into flexible spaces for living, playing and farming? These are some of the questions addressed by the “New Deal” explored by design and innovation office CRA-Carlo Ratti Associati, as part of a curatorial team led by SEURA Architectes, alongside Jornet Llop Pastor Arquitectes, landscapers Anna Cervera and Marina Zahonero, and Leonard, VINCI Group's foresight platform.

As urban mobility is being reshaped by technological innovations - from EV (Electric vehicles) and AV (Autonomous Vehicles) to data-driven multimodality - the exhibition will explore the future of the French capital’s famous “Peripherique” ring road. The “New Deal” is part of the “Les Routes du Futur du Grand Paris” exhibition, organized by the Forum Métropolitain du Grand Paris and opening at the Pavilion de l’Arsenal on June 6th 2019 (until August 31st 2019). 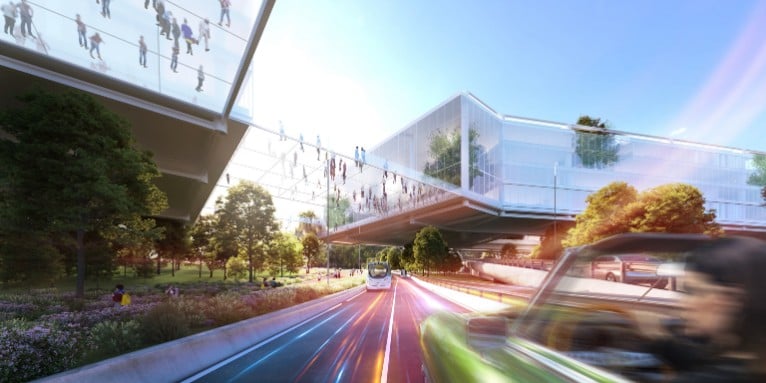 Drawing from scientific research, including that carried out at Carlo Ratti’s MIT Senseable City Lab, the exhibition envisions how Paris’ highways might look like in 2050. By then, autonomous mobility and new technologies will have transformed the mobility landscape, allowing cities to completely rethink 20th-century road infrastructure, hopefully with positive social and environmental consequences. 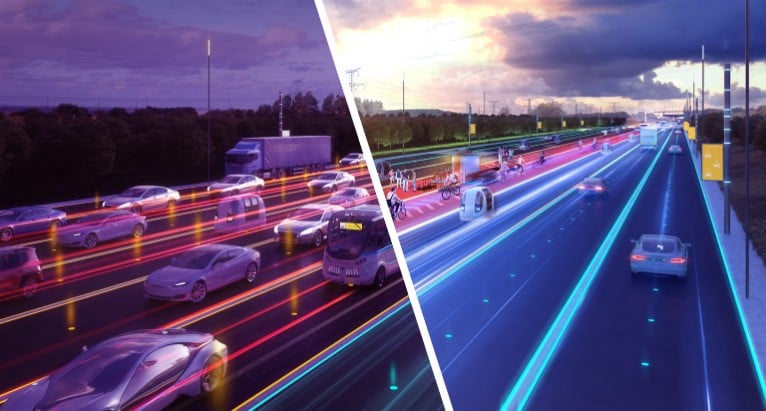 The first two visions for 2050 are dedicated to the “Boulevard Peripherique,” the (in)famous highway circling the French capital, like a necklace, for more than 35 kilometers, sometimes running slightly below ground. In “Habiter Le Lateralité” (“Living Laterality”), the current number of car lanes is more than halved, and the remaining space is converted into a reconfigurable playground. In “Habiter les Dessus” (“Living Above”), a series of green residential buildings are placed over the Peripherique almost like a set of inhabitable bridges, recomposing a historical fracture between the two Paris’: that of the historical city and that of the banlieues. Such changes are permitted by EVs and AVs, which could make our roads cleaner, less polluted and safer. 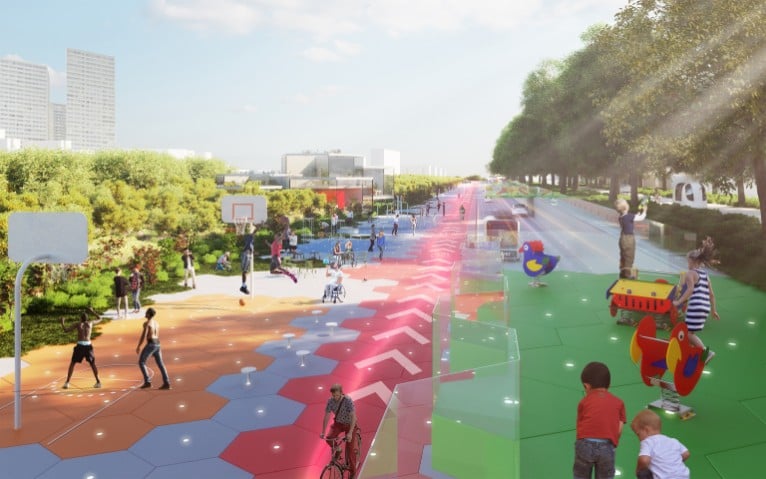 The other visions on show at the Pavilion de l’Arsenal are dedicated to three increasingly suburban highways in the Ile de France region, proposing new functions like energy production and farming. “La voie monde” (“The street of the world”) envisions how the gigantic A6 French highway can go from having 12 to four car lanes, using the central part for greenhouses or for a photovoltaic plant to generate solar energy while slashing heat production. “Multimodalite Partout” (“Multimodality Everywhere”) and “La Voie Dynamique” (“The Dynamic Road”) leverage on real-time mobility data to create new public spaces and allow commuters to get to their destination more efficiently. 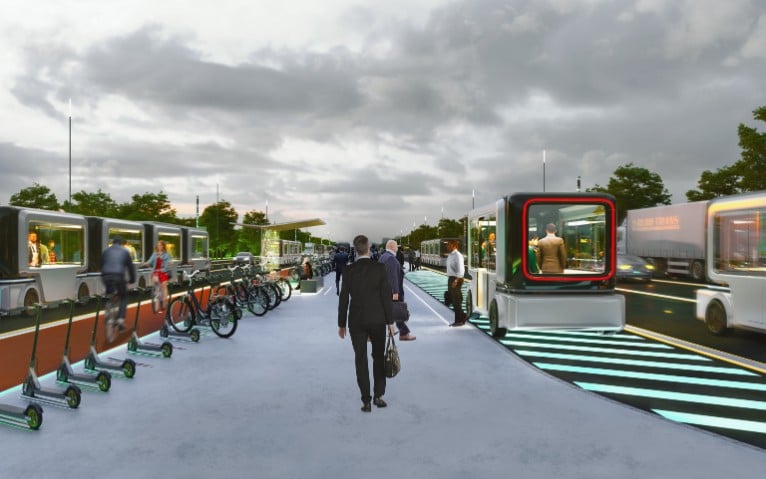 “In the 20th century, urbanists made space for bigger roads and more cars. Today, we can leverage innovation in mobility to imagine creating a more seamless and inclusive city,” says Carlo Ratti, founding partner of CRA and director of the MIT Senseable City Lab.

This project continues CRA’s long-time interest in autonomous mobility. Recently, CRA’s master plan for an innovation district on the ex-site of the Expo Milano 2015 included streets and roads designed for a future of exclusively self-driving vehicles. CRA also collaborated with Google’s sister company Sidewalk Labs on the prototype of a flexible paving system allowing for a greater degree of flexibility in how a street is used at different moments of the day, currently being prototyped in Toronto. Furthermore, the Senseable City Lab has done extensive research into the way self-driving will change the urban experience and the impact of future shared mobility models. Many of their studies constitute the scientific premise of the “New Deal” visions. 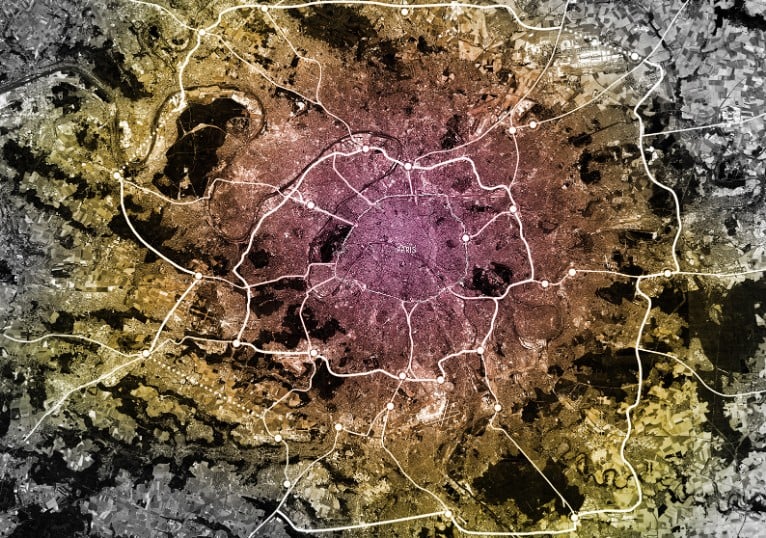 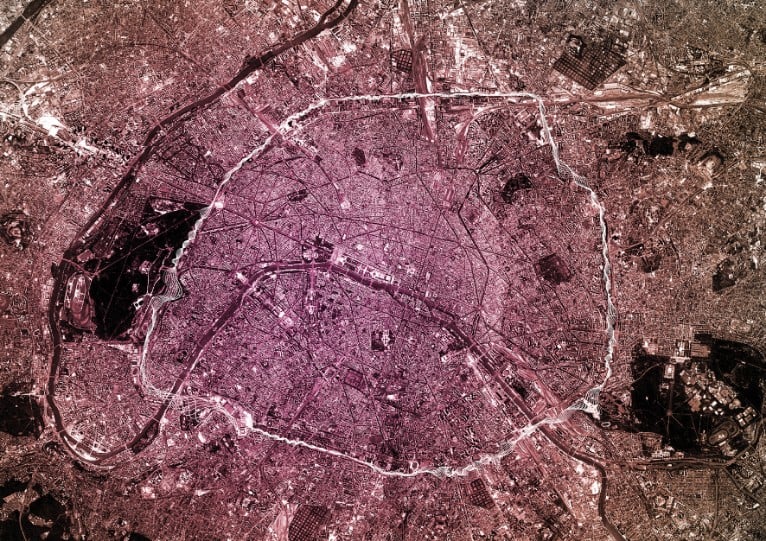