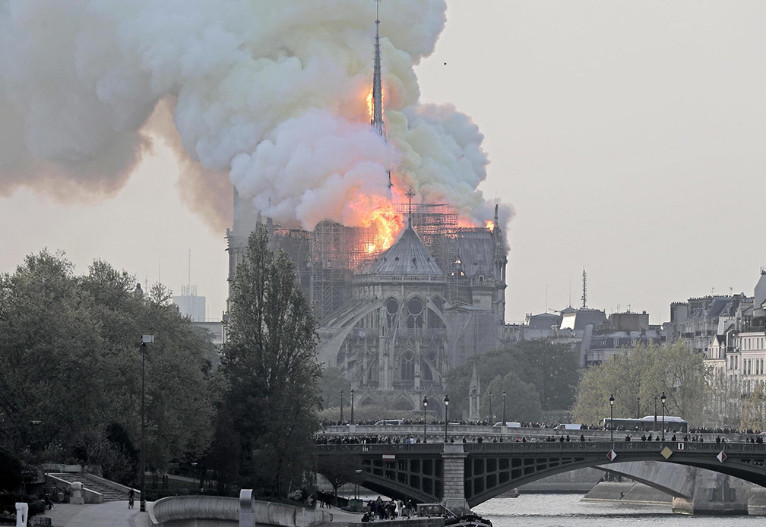 The image of Notre-Dame cathedral in the throes of a ravaging fire in the evening of Monday April 15th is now part of our collective memory. As onlookers sang to Notre-Dame to help her through the ordeal, for hours the symbolic weight of this historic building became unequivocally tangible.

According to fire brigade chief Jean-Claude Gallet, the fire started in the attic of the cathedral’s roof. Intensive structural renovations on the roof had begun only days before to strengthen the weakened and degrading conditions of the centuries-old building. The violence of the flames and the weight of the collapsed spire caused two thirds of the roof to crumble before the horrified gaze of spectators the world over. It was one of the oldest structures in Paris, containing wood felled in 1160-1170... 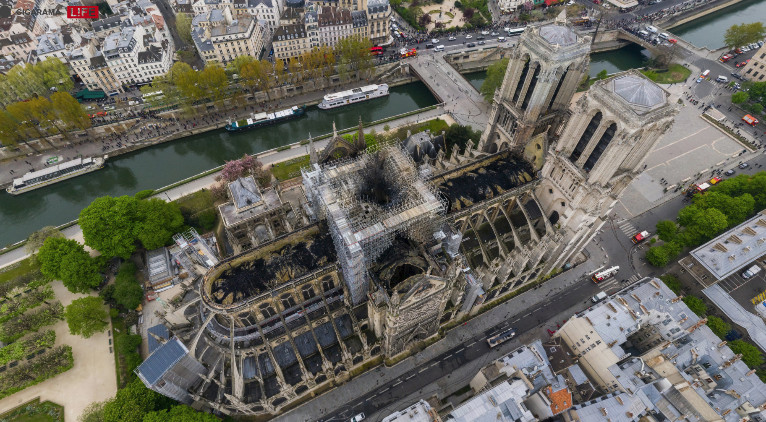 Sacred relics and precious works of art within the cathedral were saved and are currently being transferred to the Louvre for due care and safekeeping.

After hours of intervention to tame the fire and avoid further damage to the two belfries, the French firefighters were able to declare that ‘the main structure is saved and preserved’. Only extensive careful inspections in the coming days, however, will be able to confirm the extent of the damage.

Meanwhile, a competition to select the architect who will be entrusted with the lofty task of rebuilding the flèche has already been launched. Overall, the preferred route is so far unambiguously towards faithful reconstruction, in the manner of the cathedral of Reims. 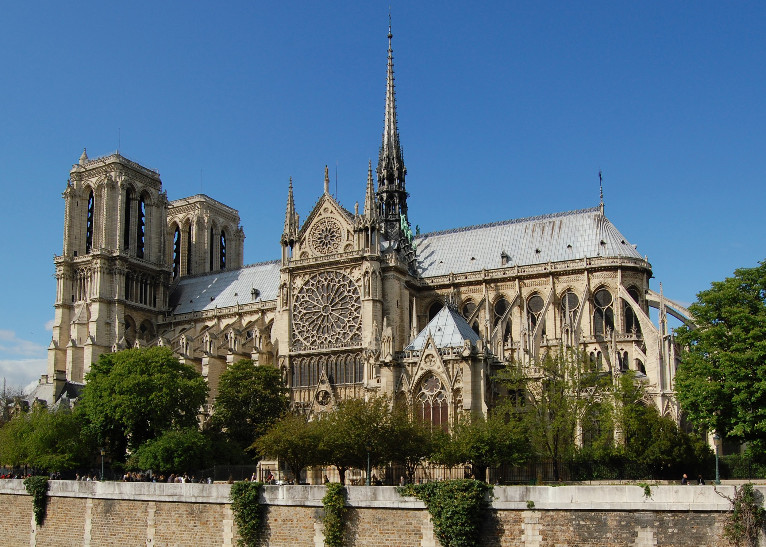 Notre-Dame is the main site of worship in Paris, and a symbol of its rich history. Located in the eastern part of the Île de la Cité, in the heart of the French capital, the cathedral is one of Europe’s most celebrated Gothic architectures, one of the most visited sites in Paris, and UNESCO World heritage site since 1991.

Her foundations are solid, there is no doubt about that. Building on the cathedral started in 1163, when Bishop Maurice de Sully decided to meet the needs of Paris’ growing congregation, with a visionary plan to expand the existing church to new, unparalleled heights. 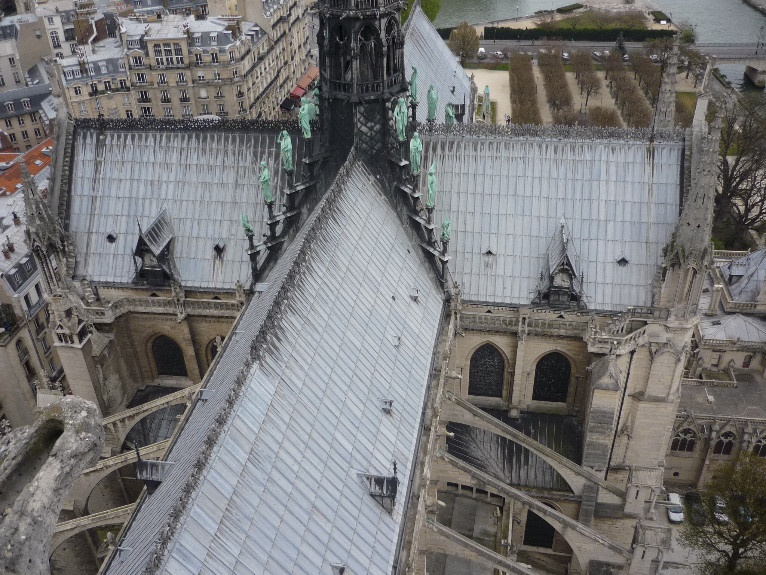 The cathedral’s five aisles with double ambulatory on a traditional cruciform floorplan were completed a century later. The grand layout was matched by the innovative ribbed vaults and flying buttresses that made Notre Dame a jewel of medieval architecture. 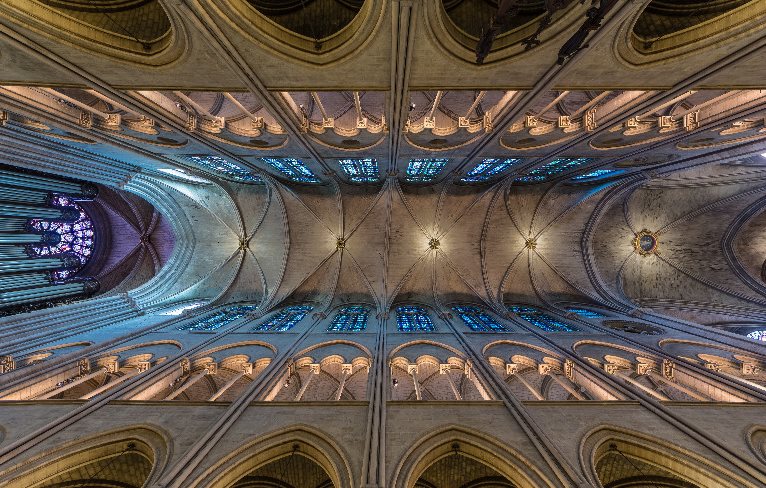 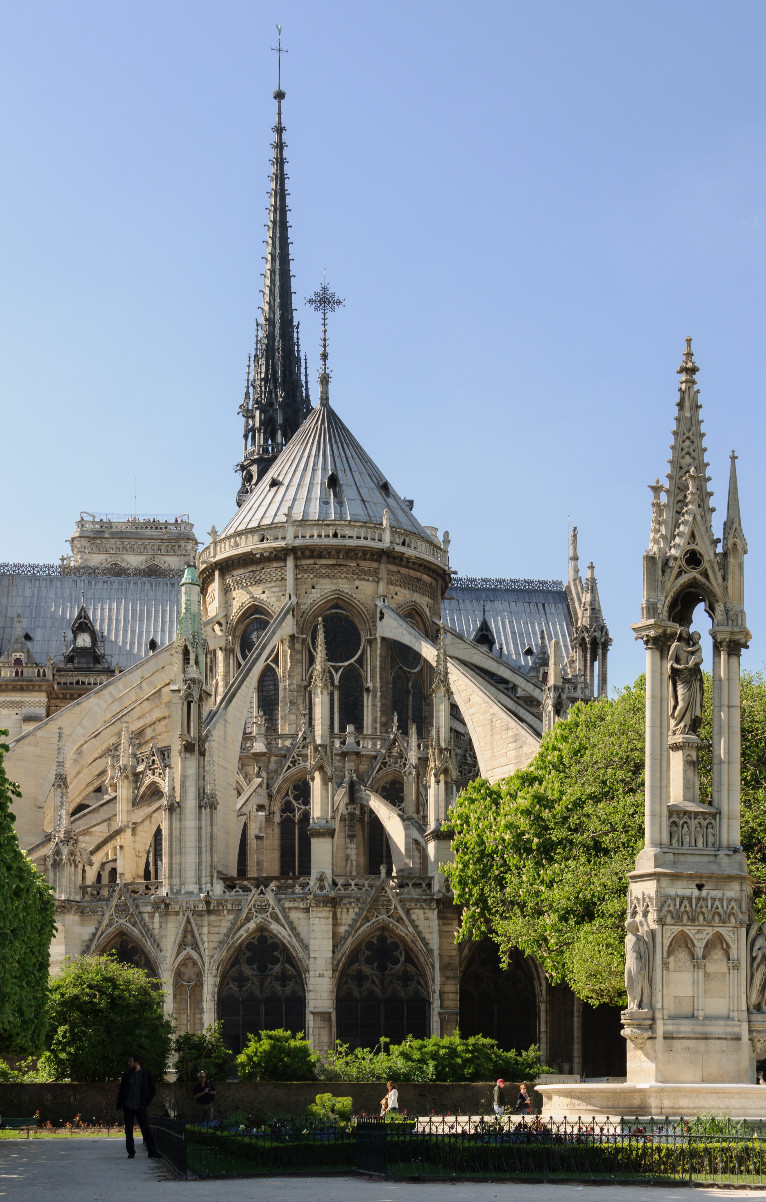 In 1220 the construction of the façade had reached the Kings’ gallery. This was followed by the south tower, completed in 1240, and the north tower, terminated in 1250. The cathedral was then the object of numerous renovations until mid-14th century, when it took its current form.

It shouldn't come as a surprise that Our Lady’s history has not been a smooth one: she has survived wars, abandonment, and violent destruction. Ravaged by the Haguenots in the 16th century, desecrated during the French Revolution (saints’ statues’ heads rolling, mistaken for kings), left to decay for much of the 19th and 20th centuries – it’s a wonder the 5,000 oak trees that made up Notre-Dame’s roof stood the test of over 850 years of human vicissitudes.

The cathedral, in fact, has also hosted some of France's most momentous historical events. It was here that Napoleon and Jospehine were crowned Emperor and Empress of France by Pope Pius VII on December 2, 1804. It was here that Joan of Arc was beatified in 1909 by Pope Pius X. The bells of Notre Dame rang out in celebration of the end of WWI, then again to mark the liberation of Paris in 1944. (Nine of these, having narrowly escaped melting during the French Revolution, were melted down and replaced in 2012 with the claim of being 'one of the most dreadful sets of bells in France' according to expert, Hervé Gouriou). 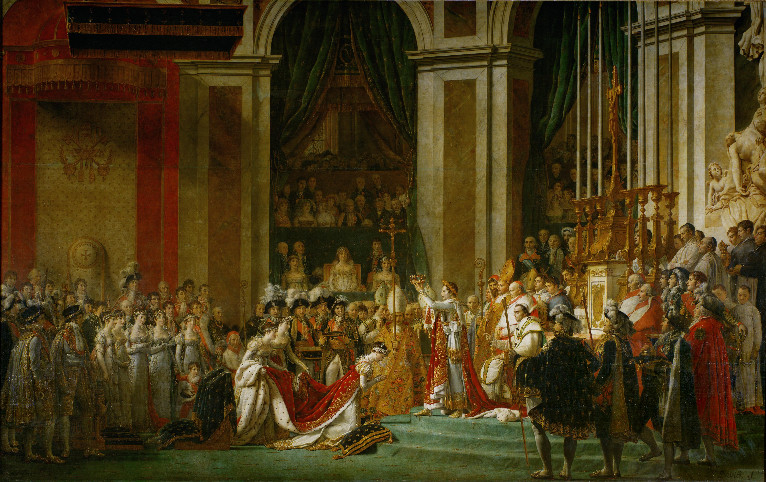 Yet every time disaster struck, the cathedral was restored. Napoleon approved the plan to add a porch to the façade at the height of the main entrance, to hide its state of total disrepair. The new addition was flanked by two porches with pointed arches in characteristic neo-gothic style. 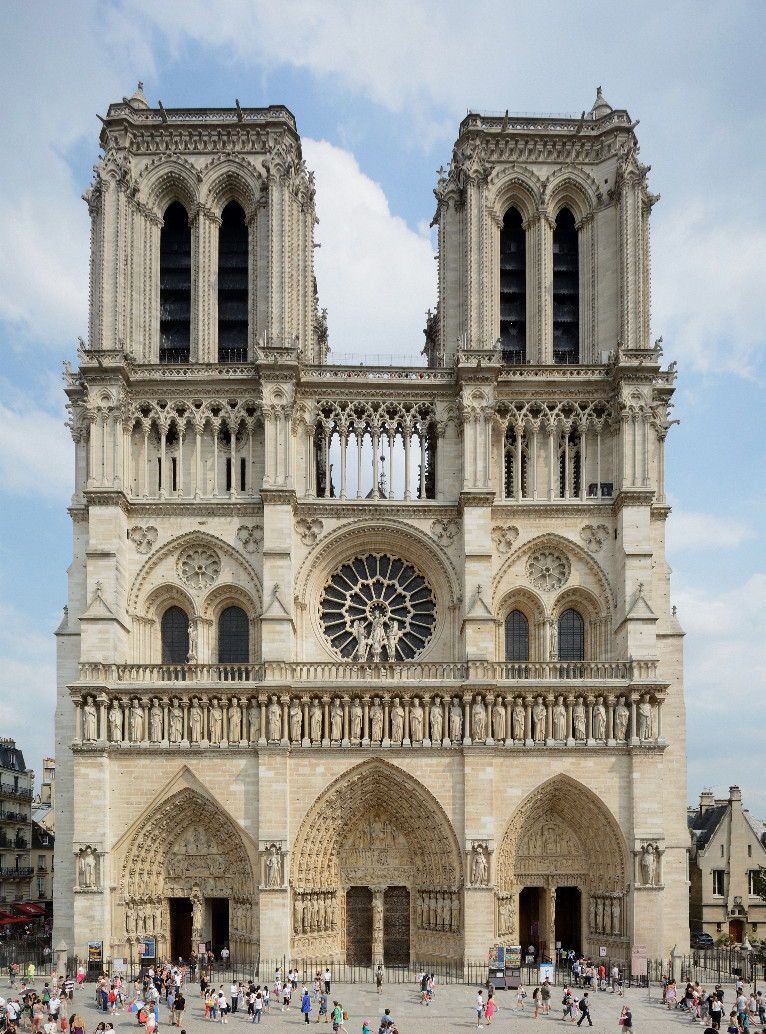 In 1817 work was carried out to the roof’s frame and the flying buttresses. It was Victor Hugo’s novel, The Hunchback of Notre-Dame, published in 1831, which brought attention to the state of abandon of the beloved cathedral. Restoration works were begun in 1845 under the direction of the young architect Eugène Viollet-le-Duc, author of the iconic spire which collapsed in the fire, and of the famous gargoyles. A major renovation of the façade to clean it of the debris of time and pollution was carried out in 2000, while to mark its 850th anniversary, a new installation was inaugurated in the Treasury museum, the organ was renovated, and a new lighting system installed. 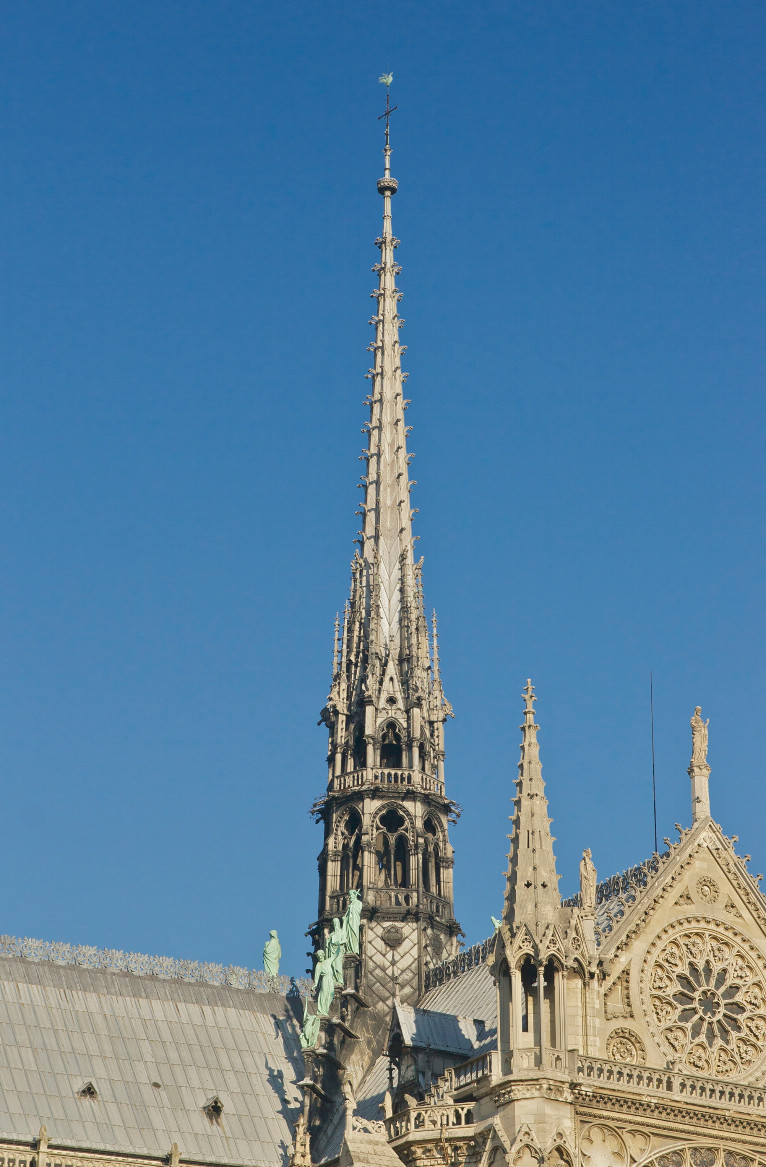 ‘A part of us burns with the cathedral’, declared president Macron during his statement while the fire still raged. But as the world processes the shock, donations are already pouring in to see Our Lady returned to her glory as soon as possible. With the over €880 million swiftly bequeathed by generous donors, Macron announced the intention to have the cathedral rebuilt within just five years - a far cry from the timeframes for its original construction.

What will the next phase of this iconic building look like?

Cover image source: ANSA; thanks to Cecilia Di Marzo for her help researching the piece and sourcing images.