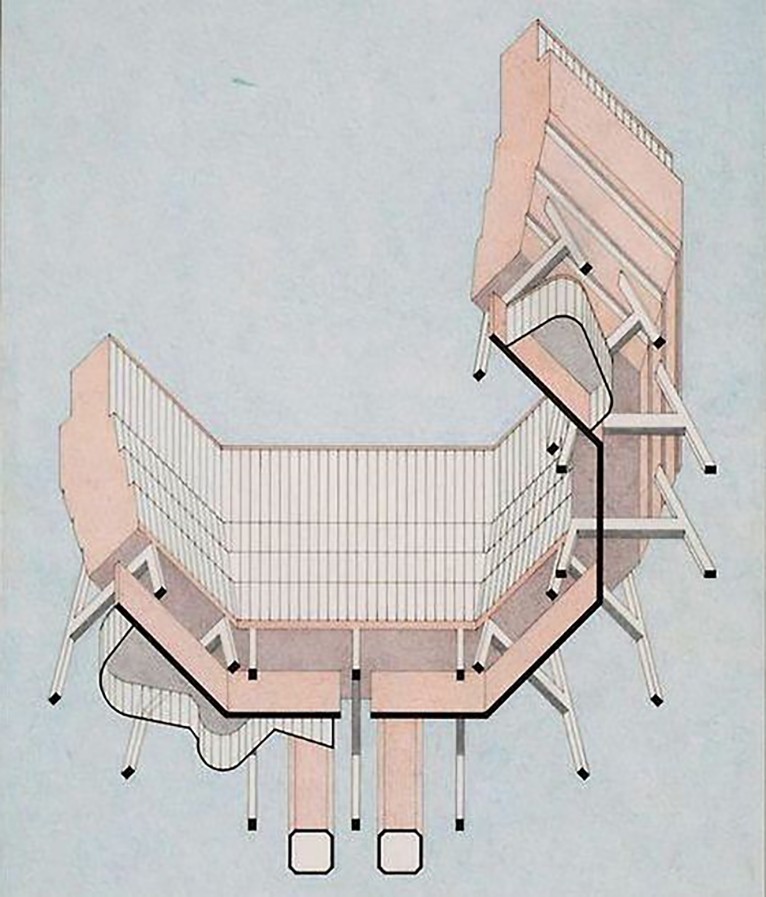 James Stirling in 1966 designed the Queen's College in Oxford, finished building in 1971.

The project is accommodation for students with adjoining kitchens on each floor and a breakfast area in the courtyard. The building creates with its unique volume a figure recalling semicircle. However, its lines are not as curves as one would expect from a semispherical volume but broken. 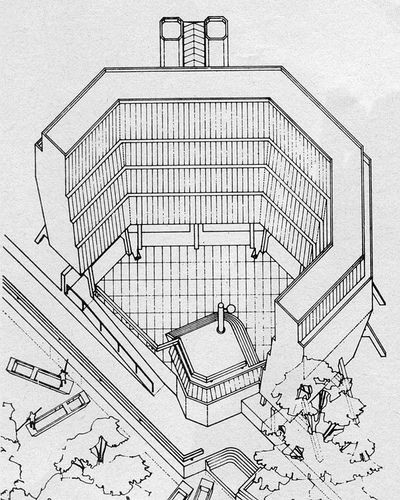 The place of construction is very important, given that the architect had to deal with historical pre-existences that were not easily negligible, especially in a puritan-like England, where more emphasis was given to functions rather than forms.

This project does not only tend to rationality or develops only from functional considerations, but embraces the idea perpetuated by Stirling to design by studying the context: "I believe that the shapes of a building must indicate - or rather, clearly show - the uses and ways of life of its inhabitants. So it is likely that its appearance is rich and varied, while it is unlikely that its language is simple. [...] For example, in a building we did a few years ago for the University of Oxford, we wanted to make recognizable the historical elements of the court, the towers of the entrance gates, the arcades: it was also placed an object in the centre of the court, instead of the fountain or statue of the founder ". 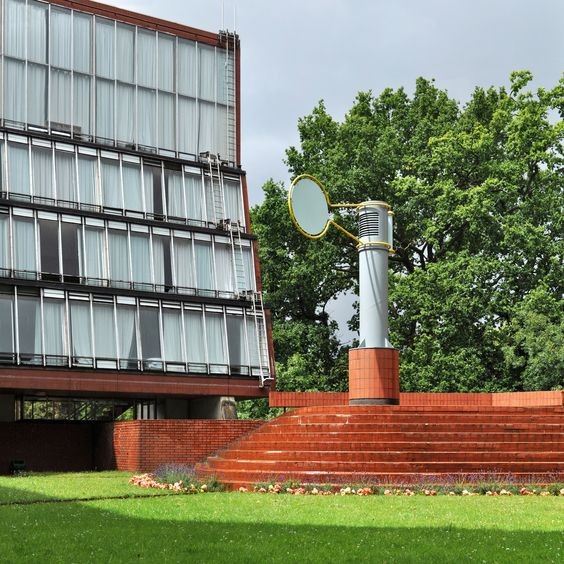 It is thus that the building is characterized, as the skilful use of the forms to convey integrity to the historical fabric of that place.
The volume is unique and its prospects differ from each other. The main one is facing the towers of Oxford mitigated by ancient trees and a minor arm of the river Isis, and the second one faces a less idyllic area, characterized by a humble municipal parking.

The cladding is made of bricks, but the whole structure is supported by A-shaped reinforced concrete pillars, which create a very important space for the designer: a cloister. The volume containing the lodgings, in fact, is lifted from the ground. This fact does not only give permeability between inside and outside but serves to recreate the porch environment wanted by Stirling. 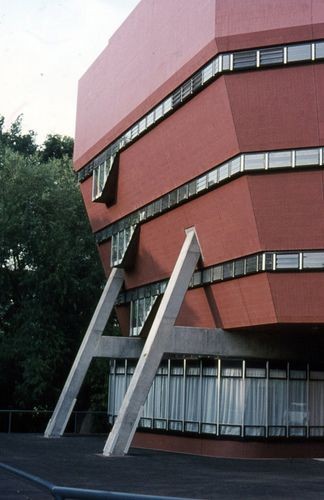 The same inclined pillars, which give the characteristic shape moved to the building, are the cornerstone of the discourse with which the critics wanted to define this work as "constructivist". The Florey Building, Queen's College in St. Clement, Oxford, will be the last of the series of "red brick" buildings that architect James Stirling will be able to design within British Universities.

Let us now try to analyze the plant more in-depth. 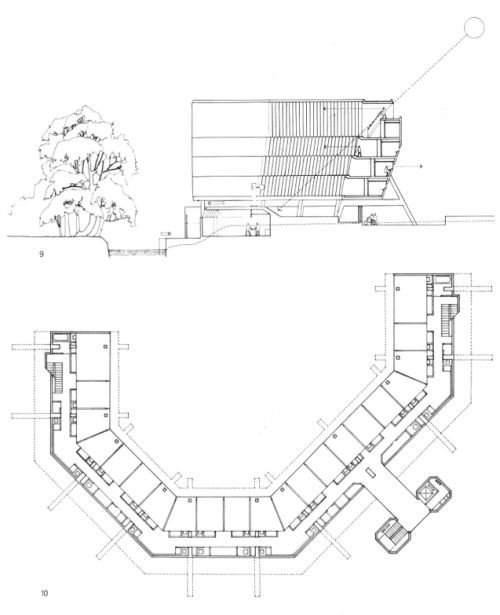 As said at the beginning the general plan is attributable to a semicircle, but it is here that we find much of Stirling's irony. In fact, it can be noted that there are five segments: four are of the same size, while the fifth is twice the length of one. The rotation angle is set at 45°. The effect is to see five sides of an octagon, where the entrance is placed on the longer side.

The entrance is part of that cloister intended by the architect, and its share is located slightly below the central courtyard. Space is characterized by a high freedom of movement, such as to allow quiet walks to the city. To access the different floors you can take the octagonal tower (always with two sides longer than the short ones) containing the elevator shaft, or its twin with the stairwell. The two are connected by a glass element. 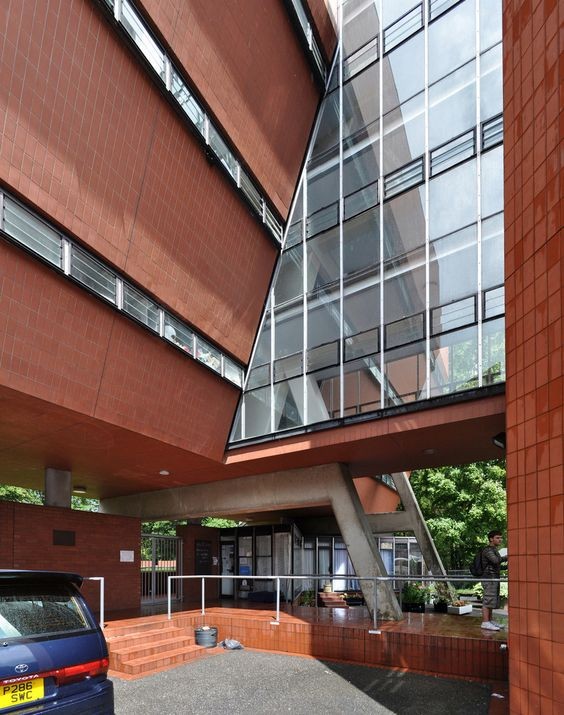 The rooms are divided by "undergraduates", distinguishable from the outside thanks to the sloping glass walls, and the "graduates", with the glass walls straight. Not all rooms have the same internal layout, because those on the higher floors are duplex, with on the upper floor a small study/reading room. Each glass wall is equipped with an efficient system of curtains that decreases the excessive insolation in the summer months.

The plan seems to be placed at random, or at least with no consideration of the ancient city located across the river. What we immediately notice is the layout of the rooms all in a single part, almost forming a Greek amphitheatre. In reality, a dialogue, or better, a point of continuity with tradition exists. In fact, the central axis is placed at 22 ° and a half, tangent to the Magdalen Tower, the tallest building in Oxford with its 44 m. Its plan is a square, but on each side, there are some octagonal base towers very similar to those for the Florey Building. 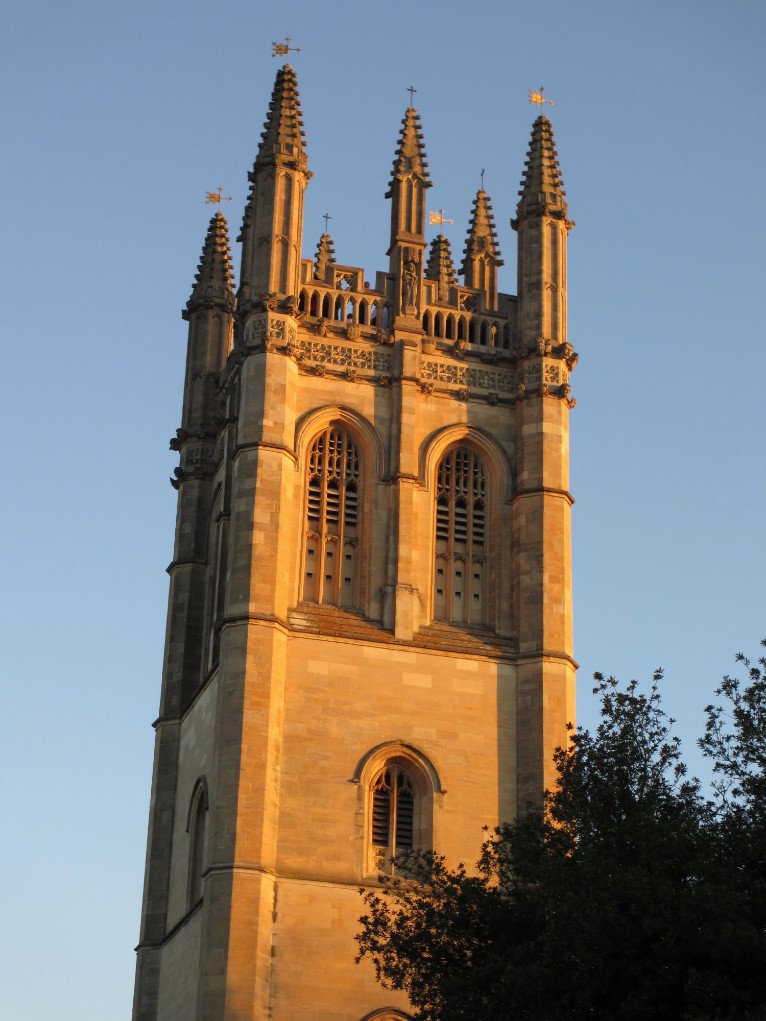 One last important element of the project is the breakfast room, which is located at a lower level throughout the rest of the complex. The roof is slightly raised compared to the patio, and in the middle is placed a weather vane that not only has the function of ventilating the inside of the room but replaces the fountain statue typical of English colleges.

The architecture, in itself complex, has been realized masterfully simple by Stirling, with a sure control of all phases of the design with the use of elementary geometric shapes. 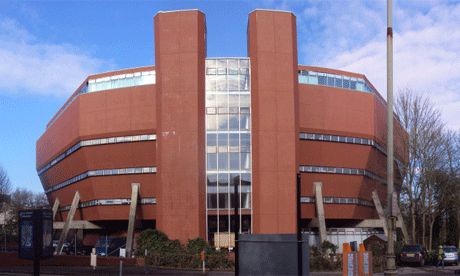 "So the functional questions are essential to define the initial parameters, then we continue with a series of statements that are not only functional but condense towards the manifestation of a coherent organized design", so Stirling tries to find a new language in the modern architecture, which does not project through a functionalist myth that wanted to explain the buildings as if they were "kept in a state of sterilized purity, come into a kind of cultural freezer", but that can be influenced by different modern architectural knowledge, and who can play with them in all the typical irony of Stirling. 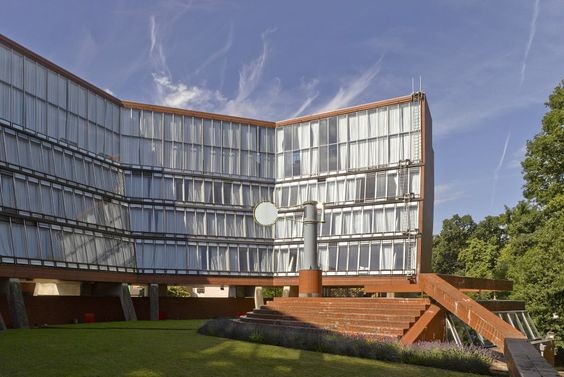