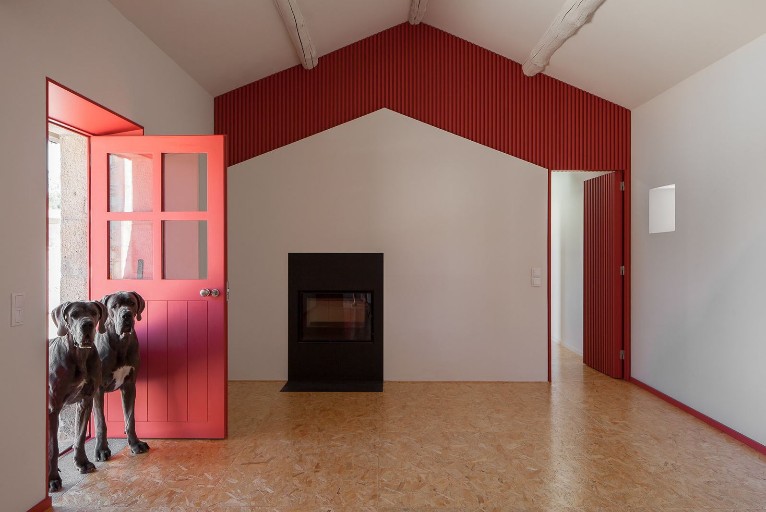 Once used to shelter animals belonging to the farm house, House in Rio Mau is a renovation project in Portugal’s Douro Litoral region.

The house is built in granite and its interior space is a trapezoid 4,3m wide and 32m long.

A lintel stone marks the number “1833”, a plausible date for the initial construction. Following a decrease of plant and animal farming, the building got devoid of its initial purpose and around 150 years after its foundation it went through its first renovation in the 90’s in order to transform it into a house. 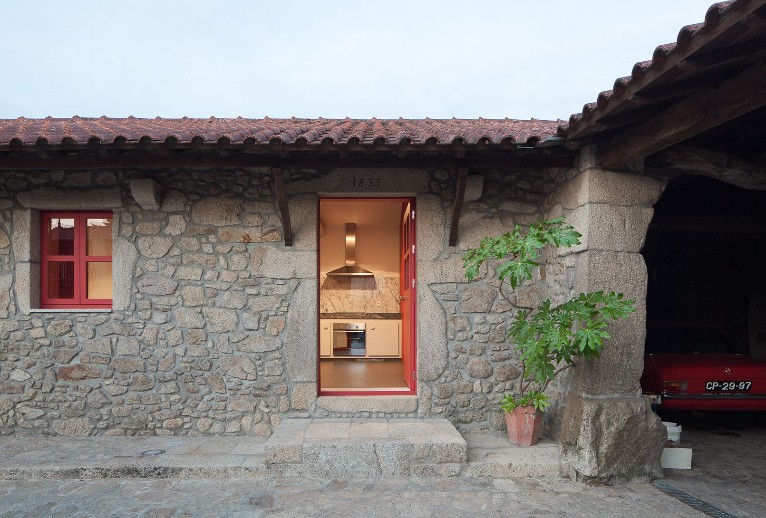 The project was eventually abandoned, leaving an unfinished self construction consisting of new windows in the facade, a base slab, a rough partition of brick walls in the interior and a new roofing. An additional 25 years would pass until the building got to be renovated to its full extent. This is a complex background that fueled and constrained the development of the project, which draws inspiration from the farming architecture found in the area.

“When visiting the site for the first time, we were impressed by the imposing wood trusses that support the long gable roof. Another striking feature was the narrow and dark bedroom corridor. These two readings of the project were joined to create a long, airy and bright space. The baroque approach of lending exterior features to an interior space was followed: the rooms were given the illusion of having a roof of their own becoming an independent building under the exterior light provided by two hidden skylights.”  - The Architect Pedro de Azambuja Varela

This simulated building white block peeks in the living room though a slatted wood wall, heavily related to the traditional red “espigueiro” (raccard) found beside the threshing floor of the farm house. The last room was modelled to be a suite and, similarly to the living room, features a higher ceiling and the protrusion of the white block through a red slatted wood wall. The bathroom takes cues from its geometry, generating an equilateral triangular shower, modelled with vertical slates of stone. 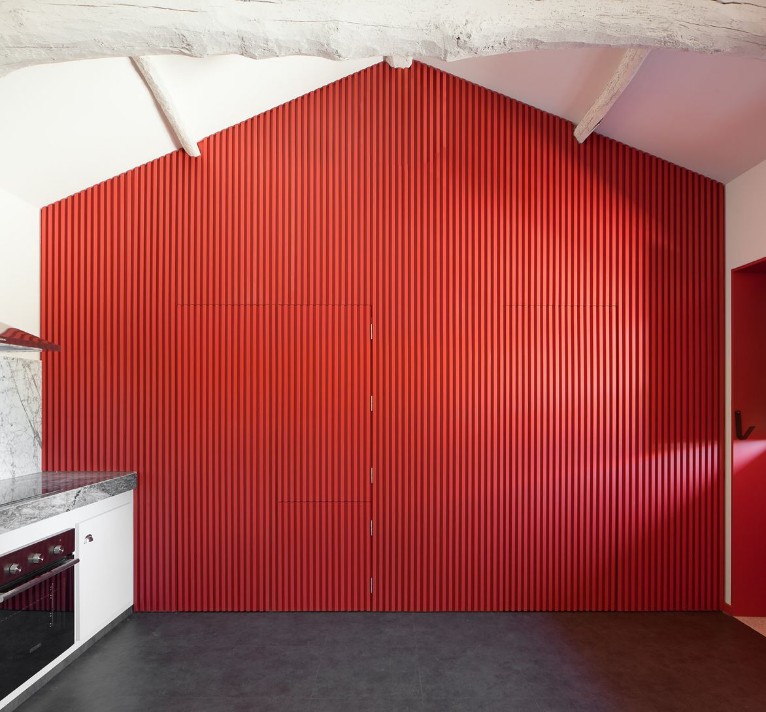 The kitchen, spatially detached from the rest of the house by a previously existing granite wall, was furnished with a technical area - laundry, fridge and pantry - beside another abstract slatted wall. 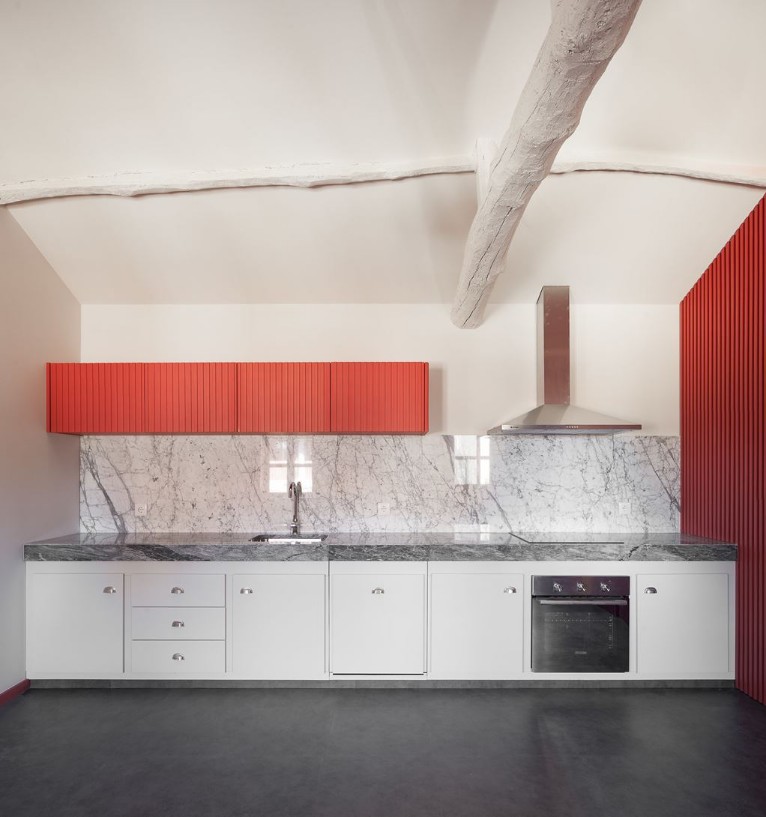 The pre existence nature of this project created its share of constraints. The previous stable was built on rocky ground, which explains the raised level of the kitchen. This fact also accounts for the bedrock which posed serious humidity challenges to the wood flooring maintenance; this was solved by applying large OSB panels as flooring, with high water resistance. 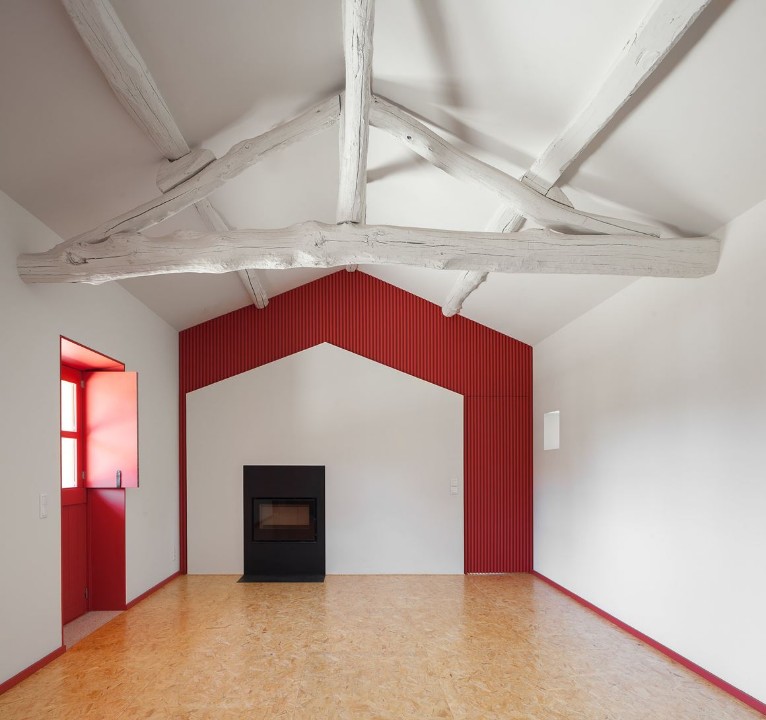 The external door and window voids dimensions were all different which naturally catered to a custom windowing solution. A wooden system was created together with the carpenter which relates to traditional designs while providing proper insulation and built-in shutters. The living room north side is marked by the apparent interior white building facade whose pseudo door is a fireplace which provides heating to all the rooms. 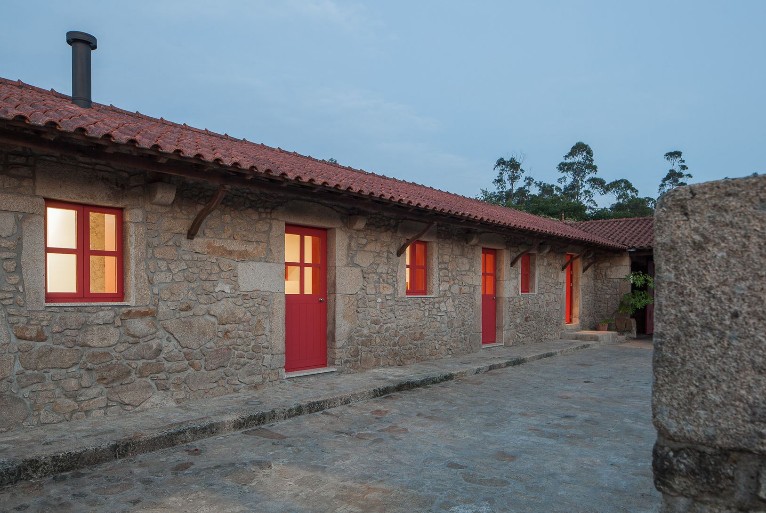 All photos by © José Campos