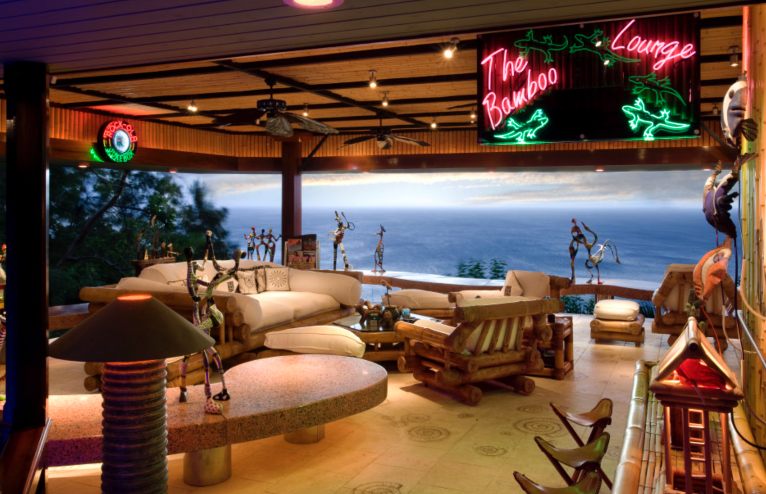 Nothing reveals more about a musician than the place they choose to come back and relax at the end of a tour or the place where they grew up.

In this quick tour we take a look at some legendary musicians' homes around the world, from David Bowie’s retreat on the island of Mustique to Frank Sinatra’s cool Palm Springs pad, these spaces reflect the sound and the personality of the celebrities who lived there.

Built for Bowie in the 1980s by architects Arne Hasslqvist and Robert Litwiller, the west-facing home sits on one of the tallest hilltops on the island and offers first-rate views of Britannia Bay.

An eclectic mix of Balinese and Caribbean influences, Bowie’s seven-bedroom Mandalay property is centered around a two-tiered pool and surrounded by lush gardens, waterfalls and a koi pond. 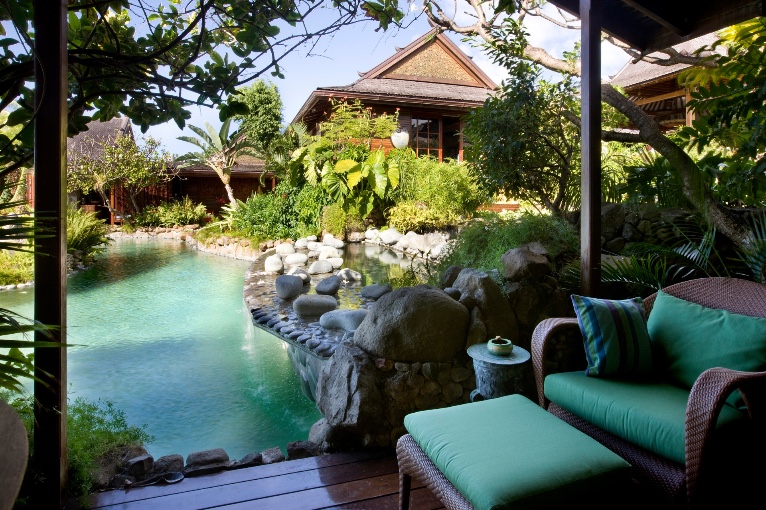 Bowie, who lived there for five years, liked the way the house was divided into different areas, like a series of magical cabinets, each one offering a unique surprise, saying, “You can go eight days and find a different place each day.”

The expansive five-bedroom villa that the late David Bowie once used as a retreat has hit the rental market - for a whopping US$40,000 (NZ$58,000) a month.

A private bungalow in one of Bali´s iconic houses, where David Bowie and Iman spent time during honeymoon is also on Airbnb 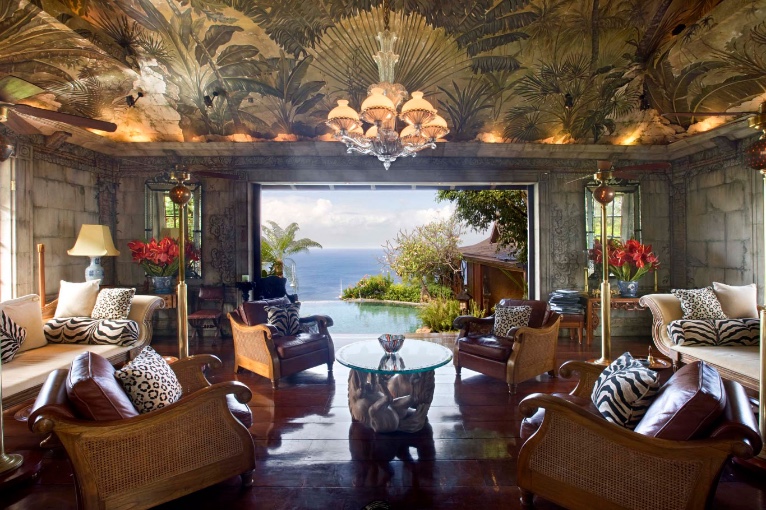 Ray Cash brought his family to Dyess in 1935 when President Roosevelt's administration created Dyess Colony in Mississippi County, a space for farming families and an experiment in American socialism. With no money down, the Cash family was given 20 acres of fertile bottomland and a five-room house in which to live. The house was seen in the motion picture "I Walk the Line." Now owned by Arkansas State University, the house has been restored. The restored admin building contains exhibits related to the establishment of the colony, lifestyles of typical colonists, and the impact that growing up in Dyess had on Johnny Cash and his music.

You can visit the home of Johnny Cash and see the restoration efforts that have preserved this unique American farming community and the childhood of an American music icon. 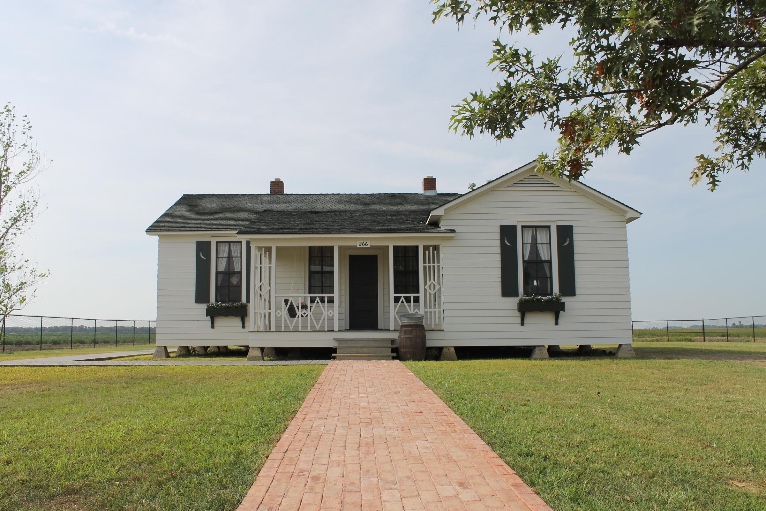 Cher relaxes inside her Aspen retreat which was decorated by Ron Wilson in just six weeks. The adobe villa, surrounded by cattle ranches, was conceived by architect David Finholm. 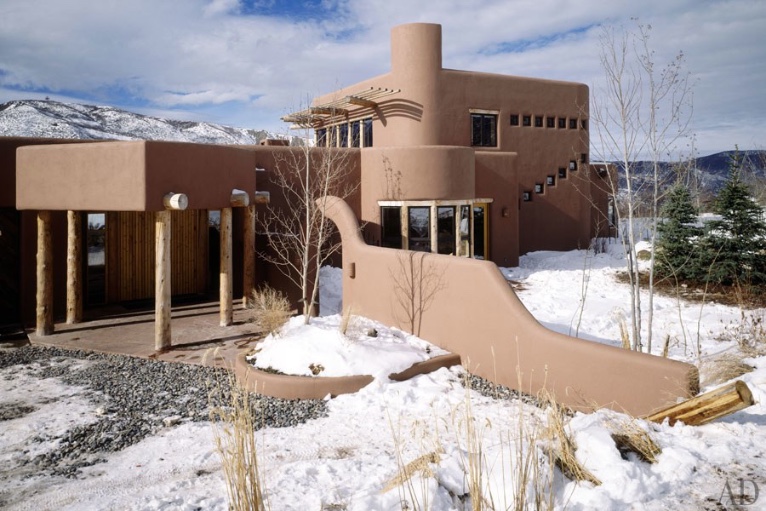 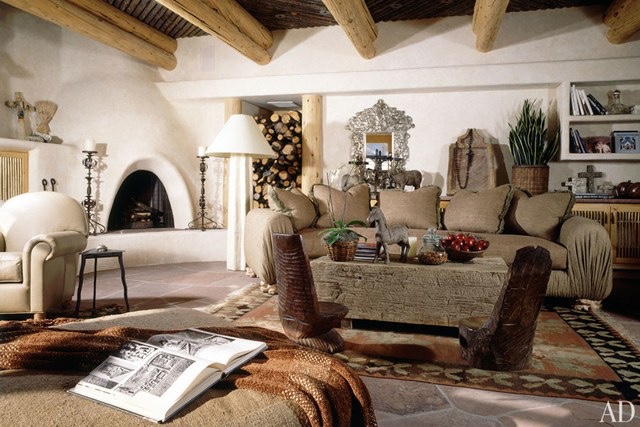 The musician and his partner, film producer David Furnish, wanted to create a comfortable West Coast base in Beverly Hills for their expanding family.

A vibrant digital print by Jeremy Blake sets the chromatic tone in the living room, which is anchored by a Willy Rizzo–style pink-lacquer cocktail table, vintage sconces flank the mantel, crafted of Corian by DuPont and a David LaChapelle photograph hangs on the far wall. 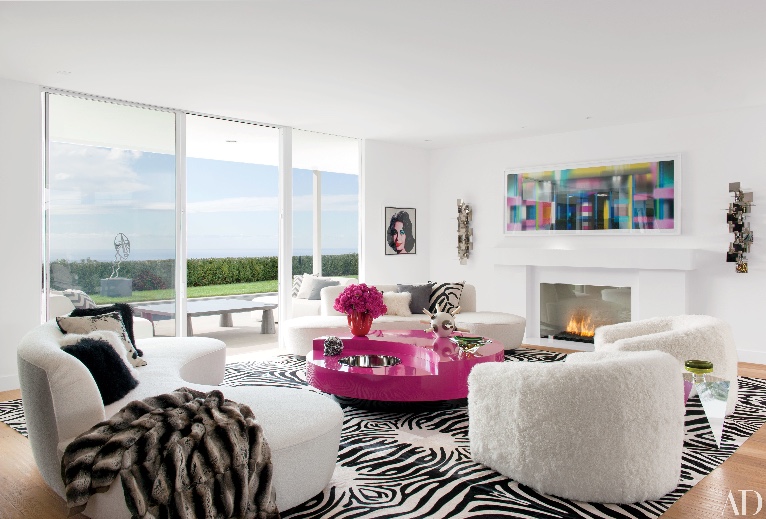 The home was decorated by Martyn Lawrence Bullard. 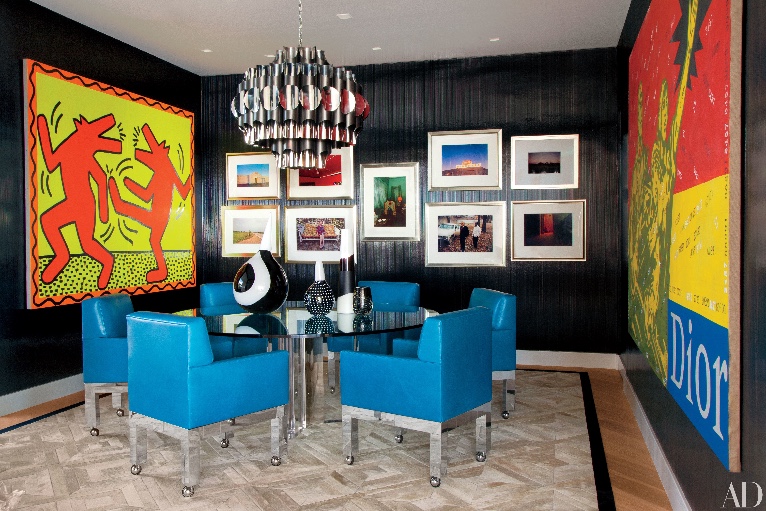 Elvis' Graceland is a mansion on a 13.8-acre (5.6 ha) estate in Memphis that is currently a museum. It is the second most-visited house in America with over 650,000 visitors a year, second only to the White House.

Constructed at the top of a hill, in a grove of oaks, with rolling pastures surrounding, the house designed by Memphis architectural firm, Furbringer and Erhmanis, is a two-story, five bay residence in the Colonial Revival style with a side-facing gabled roof covered in asphalt shingles, a central two-story projecting pedimented portico, and one-story wings on its north and south sides. 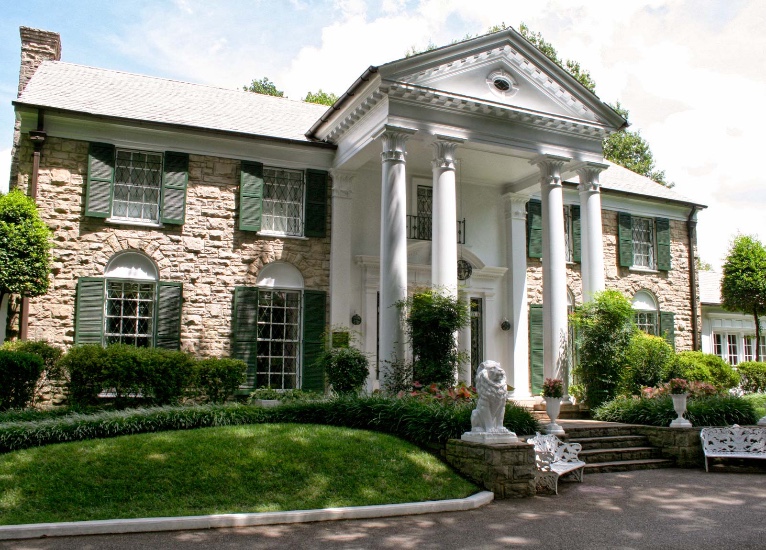 The Entrance Hall contains a white staircase leading to the second floor of the house with a wall of reflective mirrors. The floor features Elvis' bedroom at the southwest corner that connects to his dressing room and bath room in the northwest corner. His daughter Lisa Marie's bedroom is in the northeast corner, and a bedroom in the southeast corner served as Elvis' private personal office.

The second floor is not open to visitors out of respect for the Presley family and partially to avoid any improper focus on the bathroom which was the site of his death. 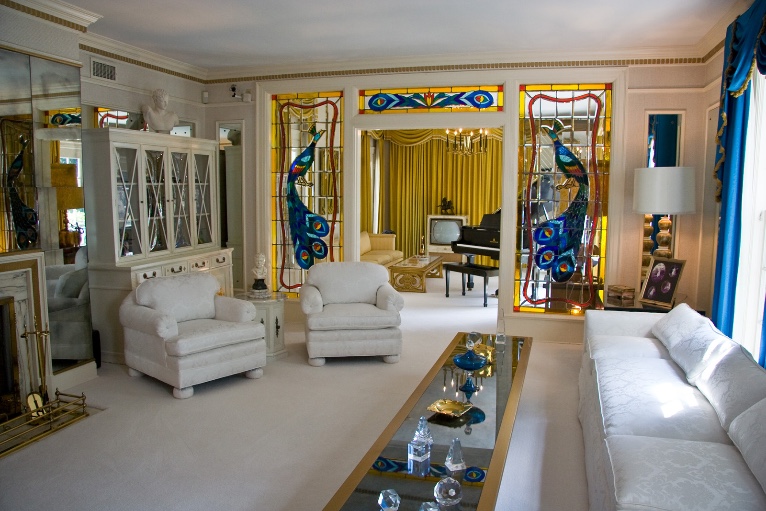 Rock guitar legend Jimi Hendrix and his girlfriend, Kathy Etchingham, lived in the top-floor flat of an 18th-century house in London’s Mayfair neighborhood in 1968 and 1969. The apartment has now been faithfully restored to show what life was like for Hendrix at the height of his career. 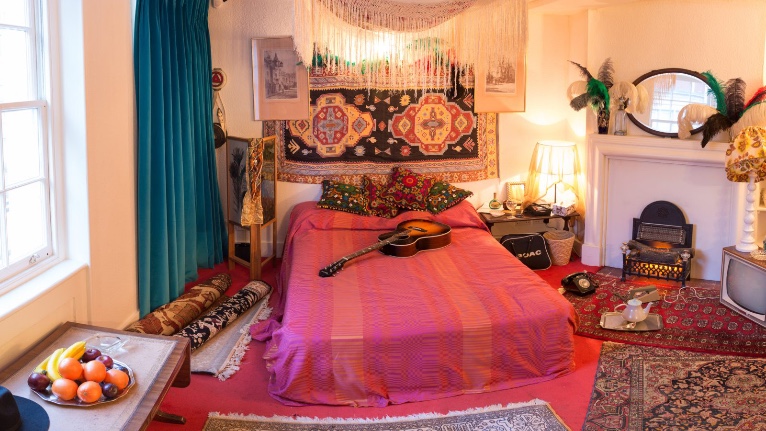 Persian rugs are on the floor, a Victorian shawl hangs above the bed, and a clamshell ashtray sits next to it. Another room has a wall of album covers — including Hendrix’s “Are You Experienced?,” his first album with drummer Mitch Mitchell and bass player Noel Redding. Some of Hendrix’s own album collection, including a copy of Bob Dylan’s “Highway 61 Revisited,” are on display. 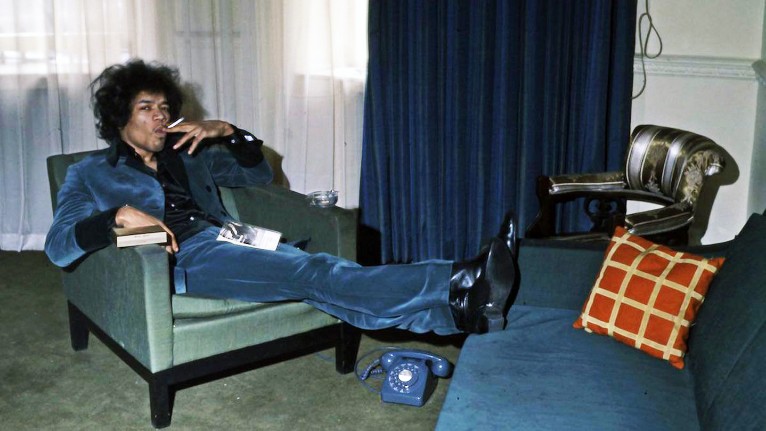 The musician and his partner, film producer David Furnish, wanted to create a comfortable West Coast base in Beverly Hills for their expanding family. 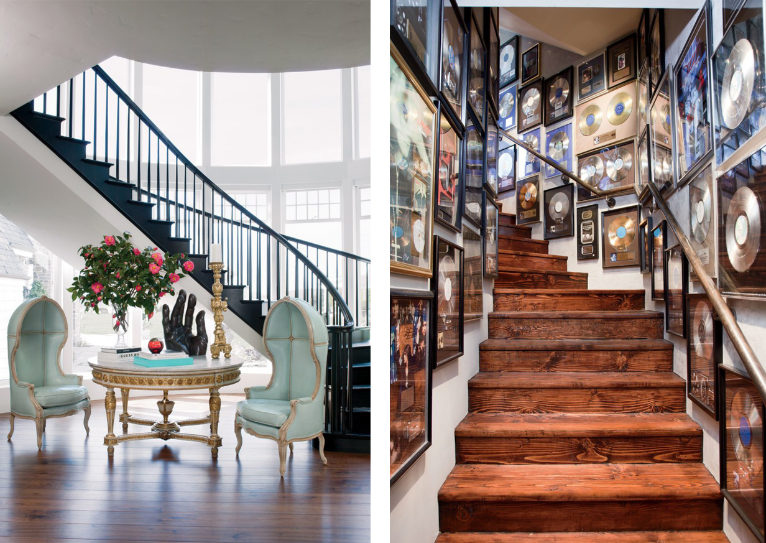 Not only did this desert home once belong to Sinatra, but it’s also a stunning example of mid-century modern architecture. The four-bedroom, six-bath house was built by E. Stewart Williams in 1947, and is equipped with a piano-shaped pool and large outdoor terrace. 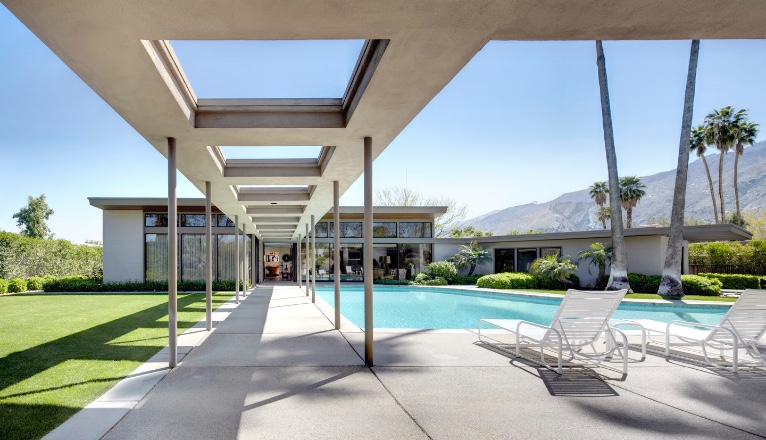 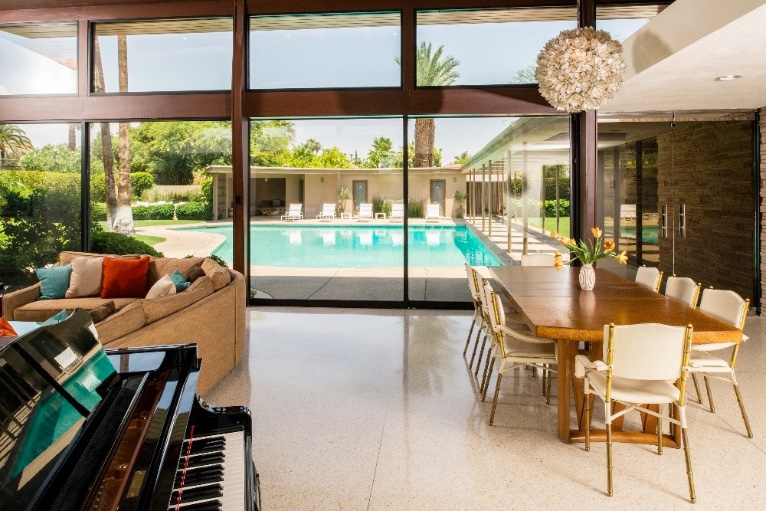 This house, purchased in 1975 featuring 19th-century architecture, was Marley’s home until his transition in 1981. It was converted into a museum six years later by his wife, Mrs Rita Marley. The main museum displays Marley’s personal treasures. 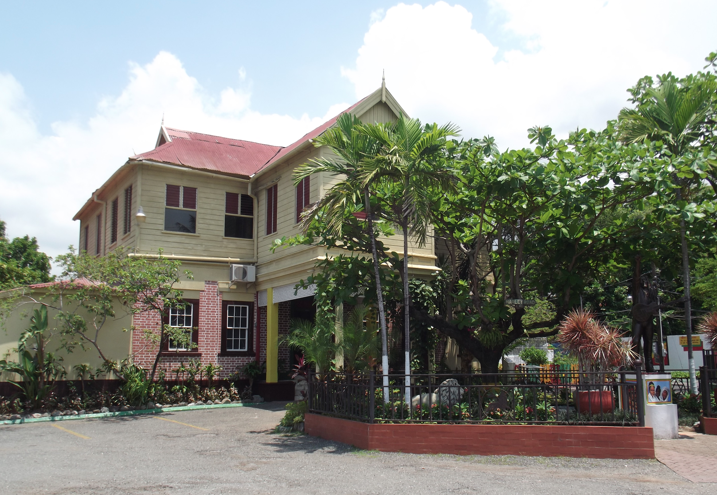 Today the property also features a well-equipped 80-seat theatre, a photographic gallery, a record shop and a gift shop filled with a wide array of Bob Marley memorabilia.