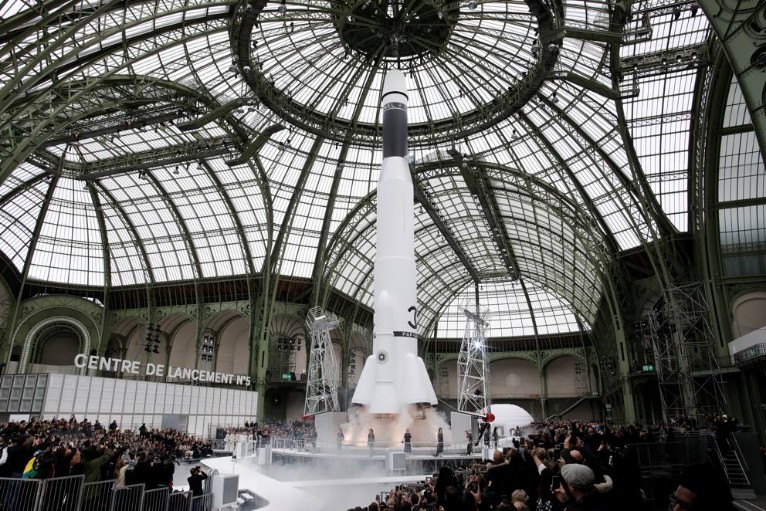 A fashion show of a few minutes is the result of several months of work and engagement, because the atmosphere you plunge into is not only characterised by the succession of dresses and make-ups, but it is also made possible thanks to a real tale made of lights, music, design, fitting out and people, always (or almost always) aiming at amazing the audience.

Art, design and fashion are more and more interconnected one another and we cannot even realize anylonger where one world ends and the other begins.

Here is a brief overview of some of the most surprising and out-of-ordinary Fall/Winter 2018-2019 show sets of the best-known fashion houses. 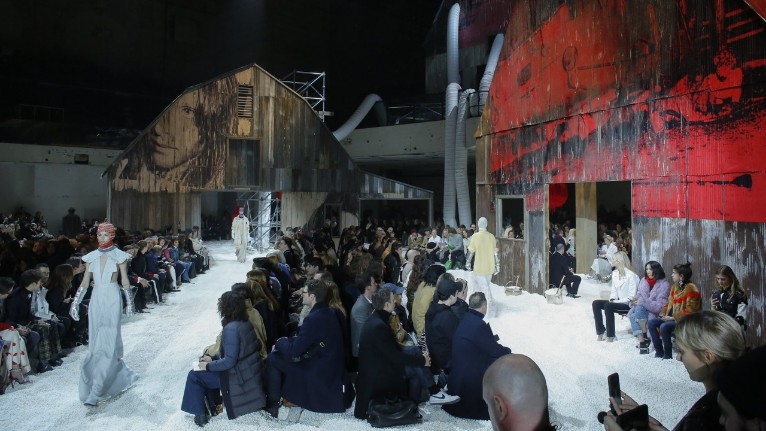 Just think about the fashion show by Calvin Klein, organised thanks to Raf Simons’s charisma and the renewed cooperation with Sterling Ruby, in charge for the fitting out of the space and who took his inspiration from the American horror cinema and from Andy Warhol’s Pop Art (and pop corn!). An innovative and radical idea, where dresses are built in the set design as silk-screen printings.

The background installation for the fashion show of the Burberry’s artist, "Our Time", combines movement, light and sound like a multi-dimension and multi-sense cloth where  visitors can enter, pendulums oscillate, time goes by through a grid. This is a work by Christopher Bailey who, after 17 years, leaves Burberry’s creative direction and decides to investigate the personal experience of the passing of time. 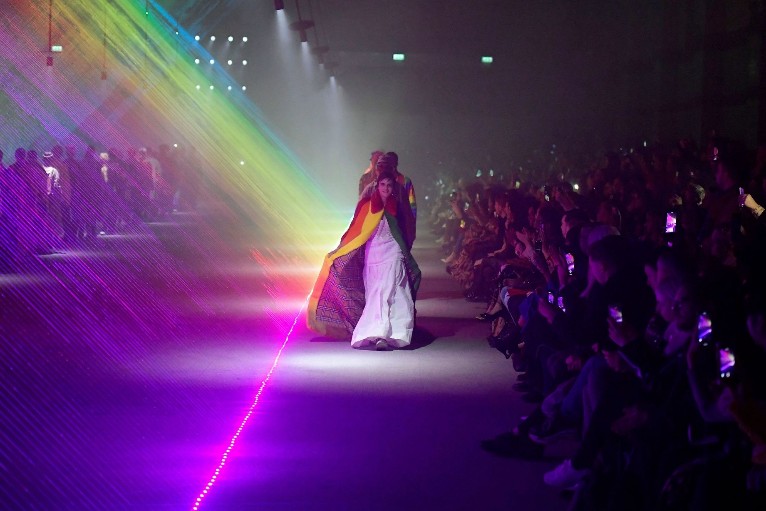 The designer left the scene with a performance at the Dimco Buildings in London with a long fashion show with 84 dresses under a shower of rainbows.

Gucci’s Fall/Winter 2018-19 fashion show was a real cinema set.  The brand’s creative director, Alessandro Michele, amazed the audience making cyborgs be shown on the catwalk with an aseptic operating room as a background. 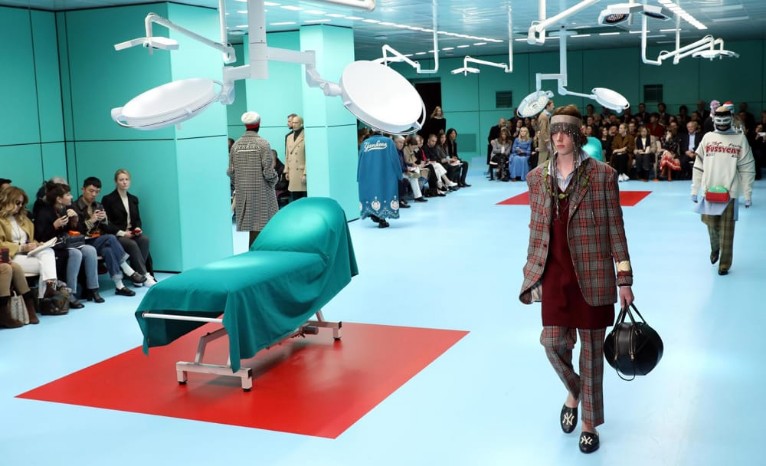 Makinarium, the creative factory known for having prepared, among other things, the special effects of the Tale of tales by Matteo Garrone (2015), turned male and female models into “post-human” creatures with three eyes, two heads and dragon puppets. 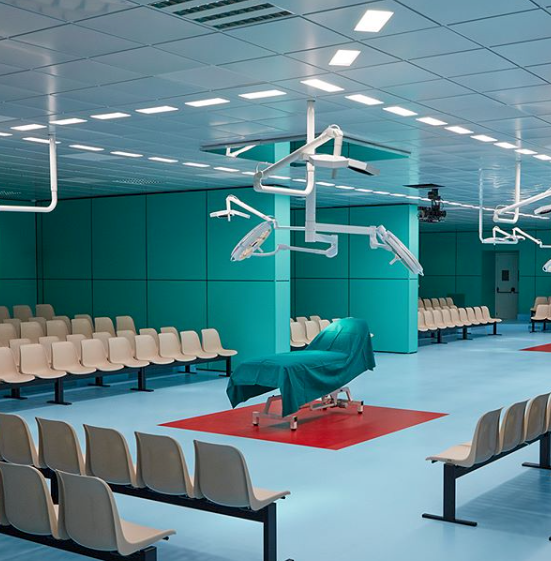 Maria Grazia Chiuri is one among a few female designers who creates a fashion made (and conceived) for today’s women. The Fall/Winter 2018/2019 collection of the Dior house is, therefore, a celebration of feminism. 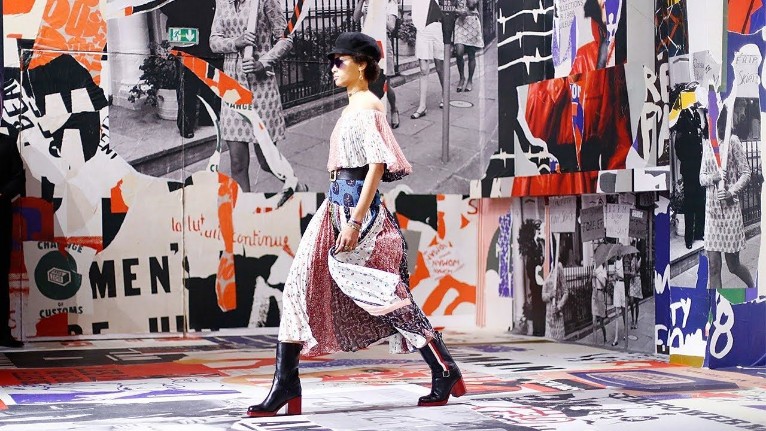 The fashion show pays homage to the pink revolution of those years, appeared on magazines’ and newspapers’ covers of that time, protest posters and slogans of the May 1968 events in France and quotations on equality surrounding the walls of the Musée Rodin in Paris. 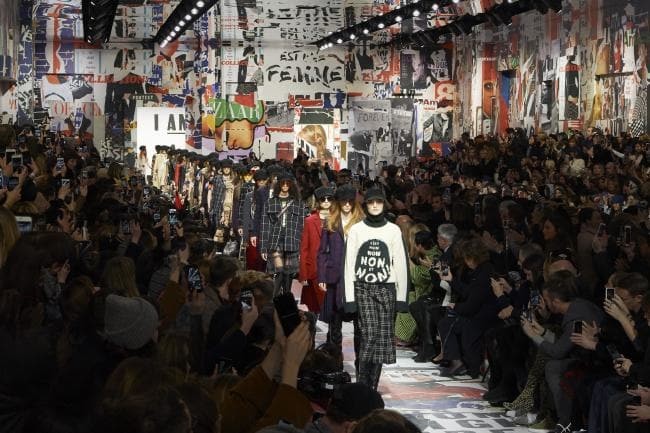 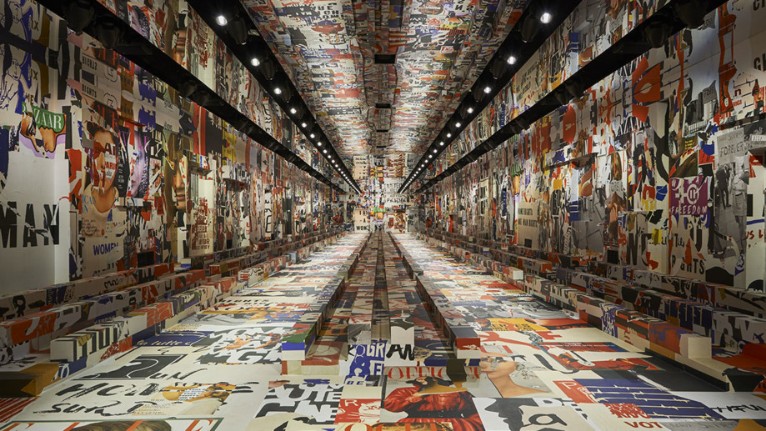 A forest of huge and bare trees, on a carpet of dead leaves and musk is, instead, the fall set of the fashion show by Chanel under the Art Nouveau vaults of the Grand Palais. 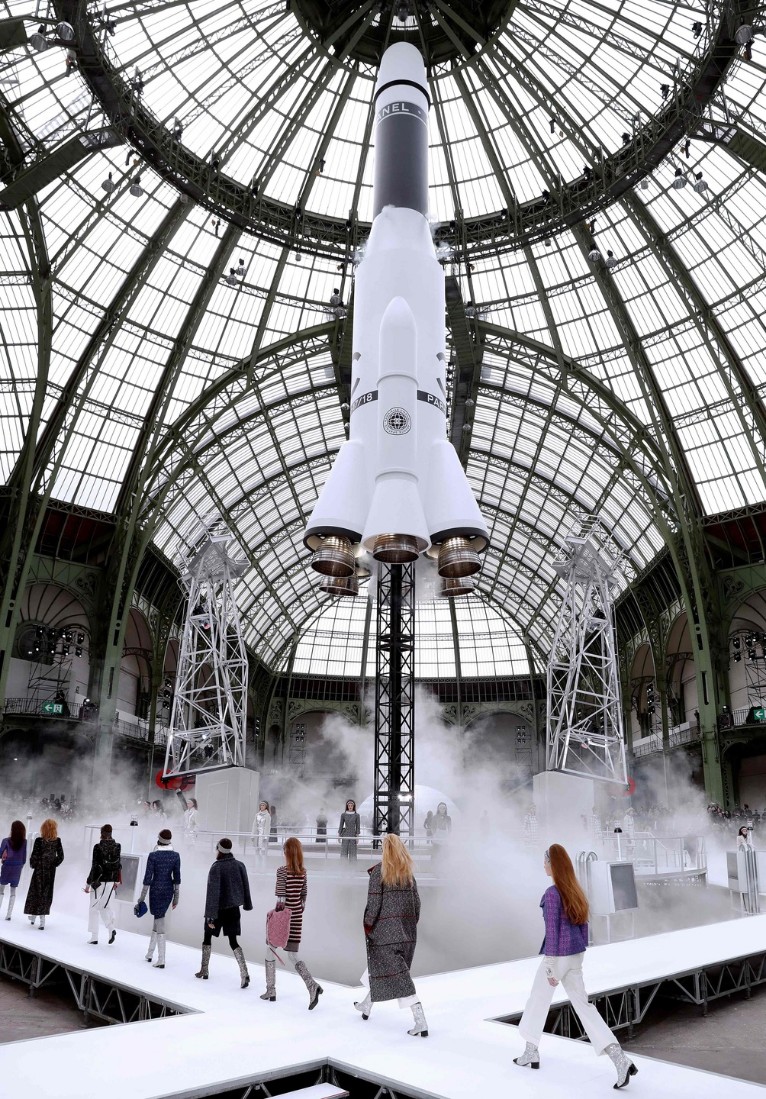 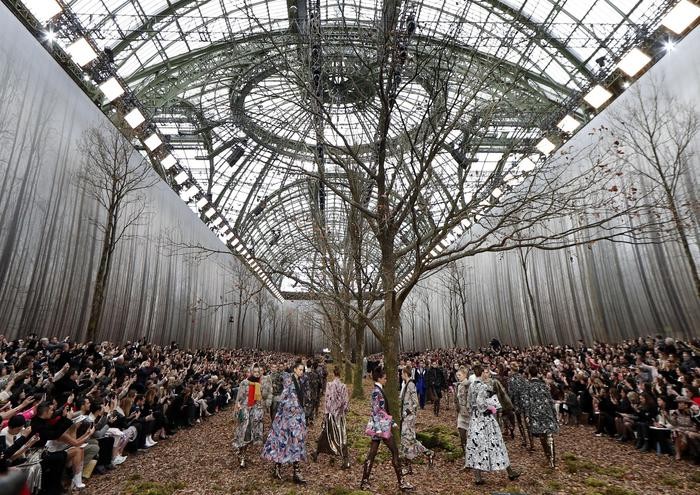 A homage to nature in its most intimate moment, which was made more and more theatrical by the genius of Karl Lagerfeld.

For the first time Prada has asked 4 famous architects and designers to work on a special material: nylon. They are Ronan & Erwan Bouroullec, Konstantin Grcic, Herzog & de Meuron and Rem Koolhaas. 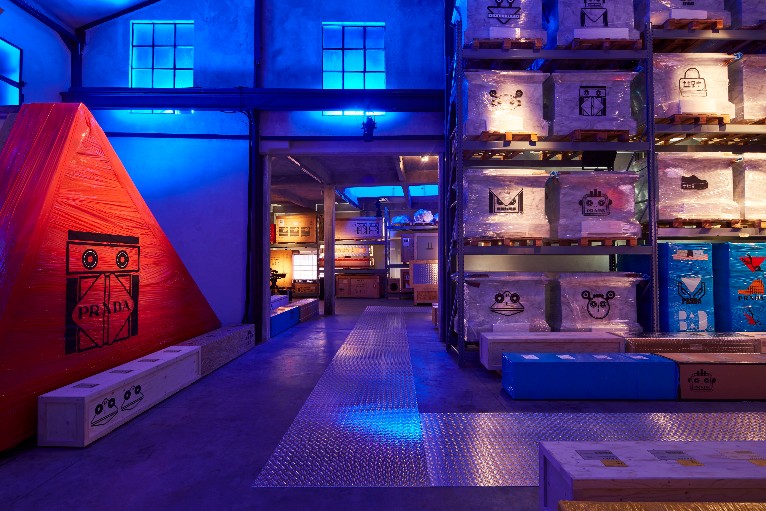 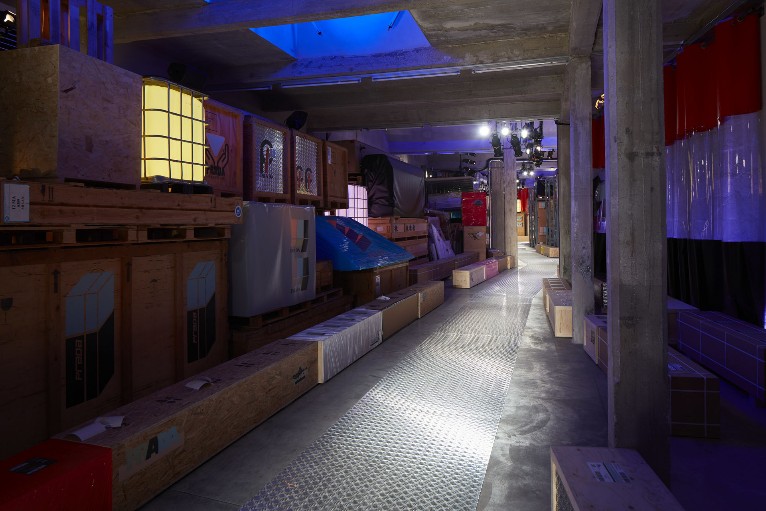 The fashion show is a real show, also thanks to the exceptional location, i.e. the Prada Warehouse, a warehouse fitted out by OMA where ‘black nylon’ as conceived by the creative inspiration of the four artists was shown. On the background there was a post-industrial scenario of the city of Milan. 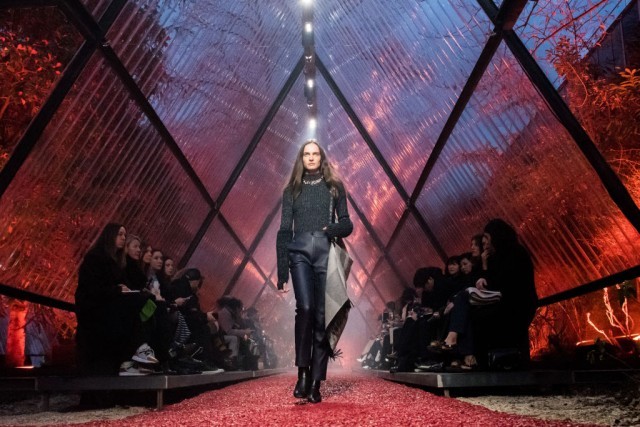 For Hermés a specially-made greenhouse in the garden of the Lycée Victor Duruye is the catwalk where fifty-four models walked down through a magic wood  at dusk among red lights, majestic trees, twitterings and Debussy’s chords.

Last but not least, the Saint Laurent house, that never disappoints our expectations and fits out a box lit up by concert lights in front of the Eiffel Tower. The fashion show set, a combination between a rave party and a sci-fi TV-series, becomes the ideal location for a show confirming Anthony Vaccarello’s talent. 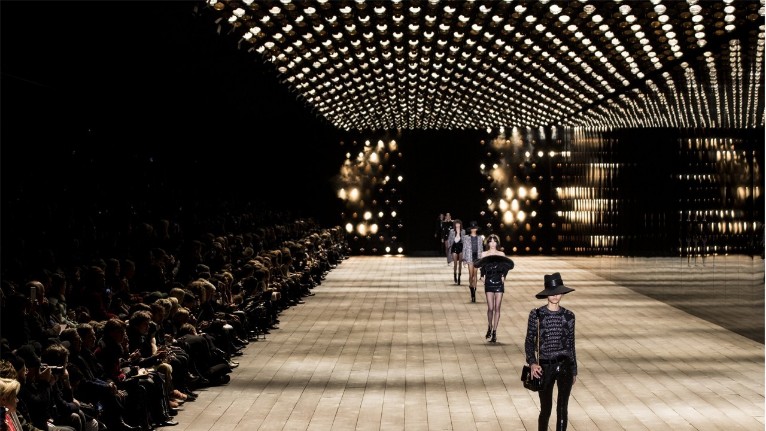 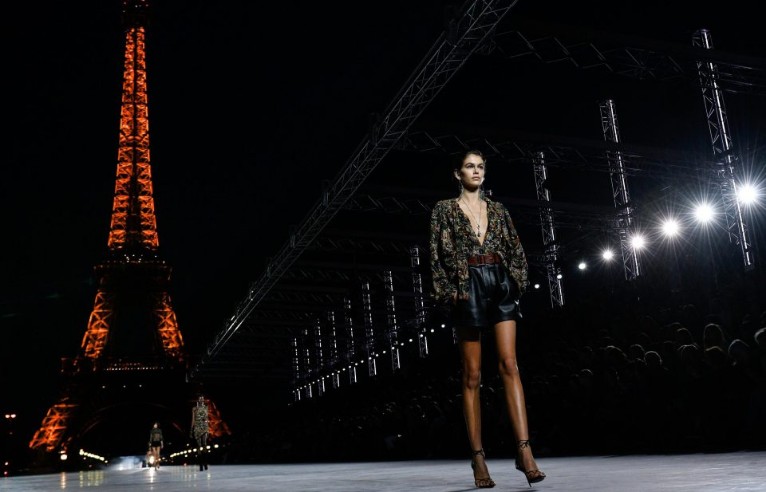