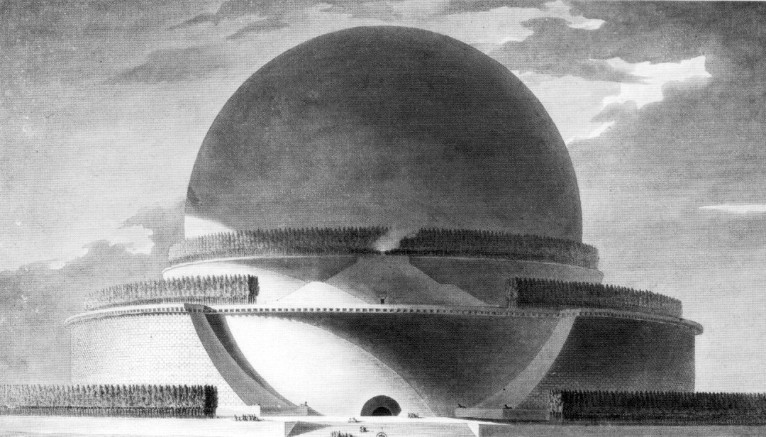 It is well known that architecture gets its inspiration from the beauty of solid geometry. Just think about the perfection of the spaces created by those solids such as spheres. Spherical or hemispheric spaces, symbols of integrity, simmetry and perfection, have always played a central role in architecture.

Here we propose a series of examples that, from the past until today, may be considered as indelible icons in the wide itinerary of the story of architecture. 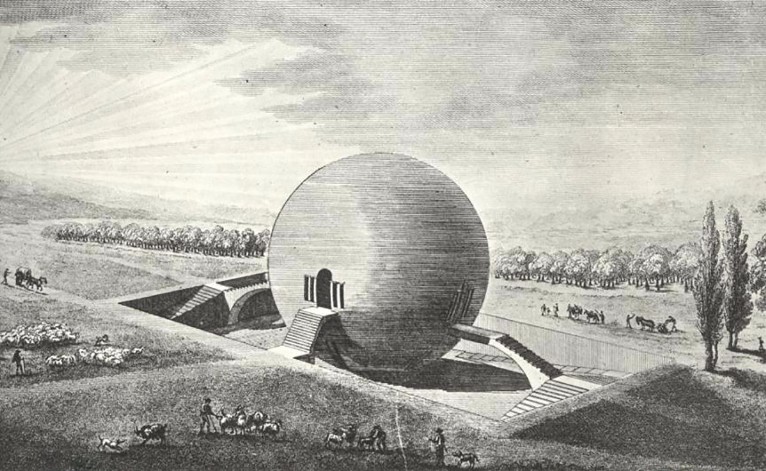 The visionary projects by Ledoux and Boullè

Let’s start from the visionary projects by Claude-Nicolas Ledoux and Étienne-Louis Boullée.

One of the most representative examples of such projects is the one made for Newton’s cenotaph, with which Boullée imagines a huge sphere with a diameter of 150 meters representing the immensity of the universe: «Oh Newton! With the extention of your enlightenments and your sublime genius you have defined the shape of the earth, then I have conceived the project to wrap you up in your own blanket». 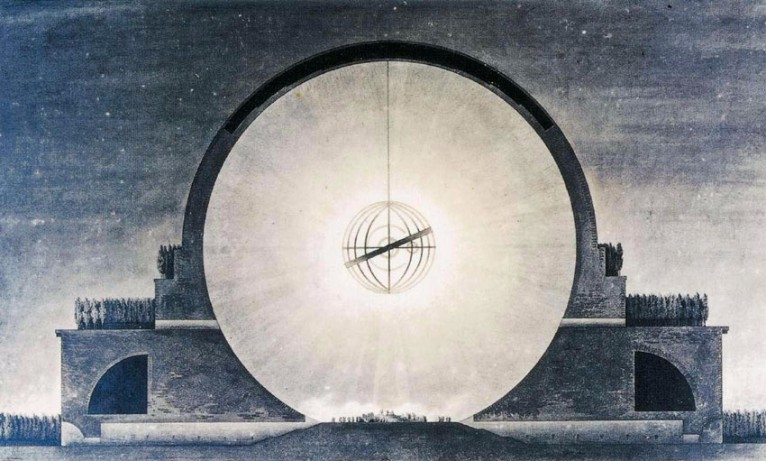 The Perisphere of the New York World's Fair

On April 30th,1939, to celebrate the 150th anniversary of the Federal Constitution of the United States of America and the inaugural ceremony of George Washington as President of the North American Federation, which took place on April 30th, 1789, the New York World's Fair was set up in a park that was specially realized for that occasion in Flushing Meadows, Queens (Long Island): this meant to reclaim a marshy and uncultivated place. 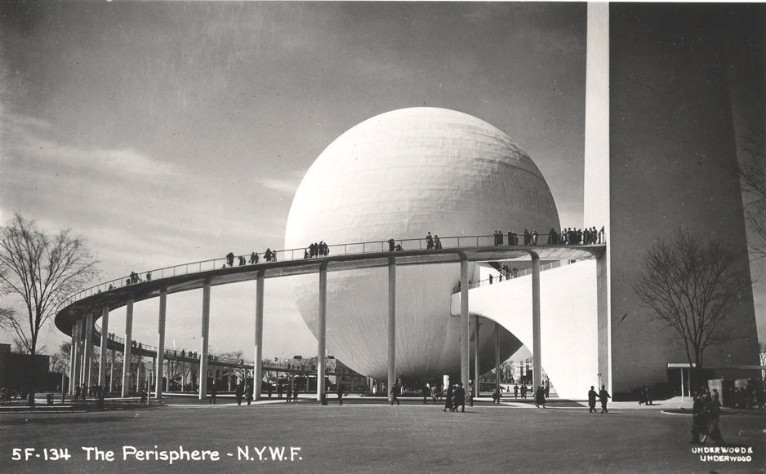 Here there were the Trylon, the 728-feet high triangular obelisk, and the well-known Perisphere, a huge 180-feet diameter globe, the “symbol” of the exhibition.

Dante Bini and its Binishells

The ’60s – In Sardinia Antonioni decided to impress Monica Vitti by getting a villa built to spend summertime. It was not an ordinary villa: it was the project by a revolutionary architect, Dante Bini, inventor of the so-called “Binishell” technique. 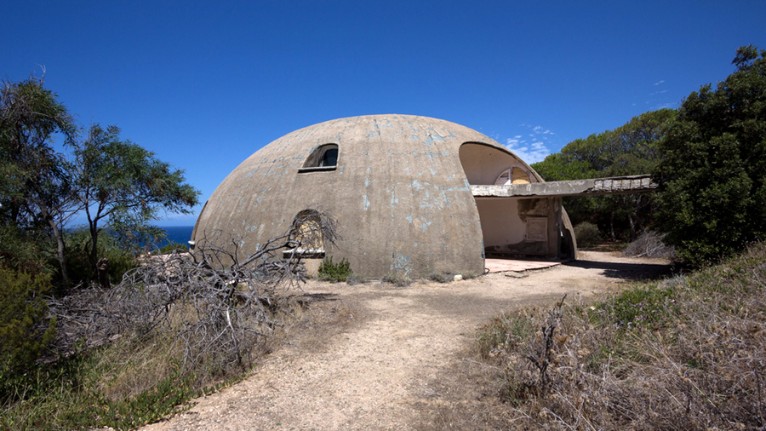 This building technique consists of blowing up a structure made by reinforced concrete, thus creating a dome in a short time and with low costs. The metal elements and the concrete as well are put on a big air gap, that gives the structure its hemispheric shape.

Once the concrete has hardened, the air gap is deflated so that it can be used again. 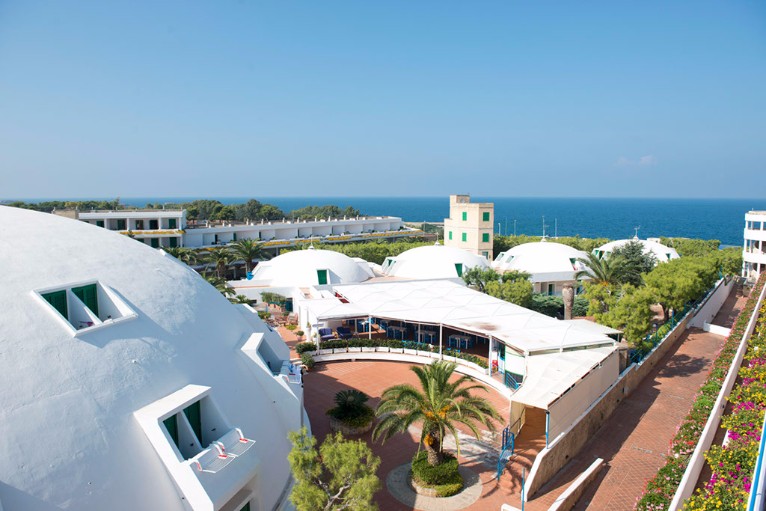 You can see the same technique applied in the holiday village named “Cala Corvino” in Monopoli, Apulia. 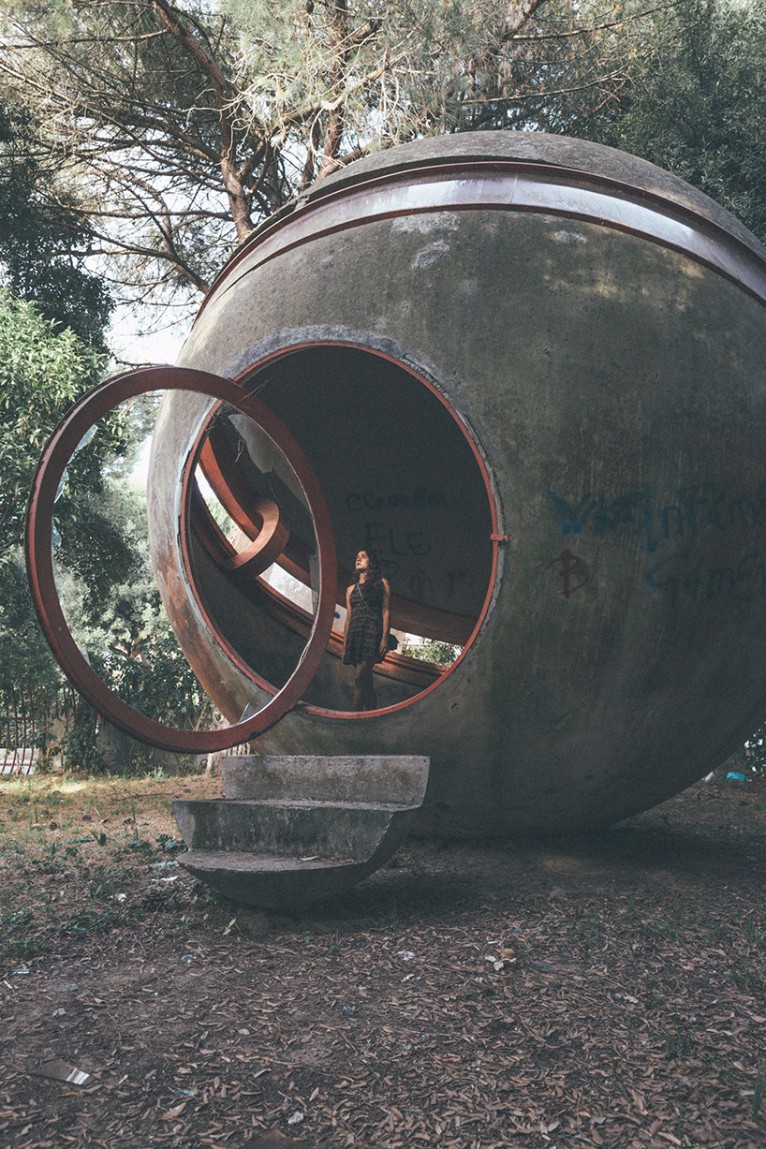 The first stone of Villa Perugini in Fregene was laid in 1968, at the time of the flower children, young people who wanted to rebel against all conventions. Perugini was infected by this nonconformist wind, too. Since the middle of the Seventies his family had spent there almost ten summers, even if the project had not been completed yet. Then Giuseppe, Uga and Raynaldo moved away from Fregene and no one has lived in the house anylonger since 1985.

Spherical shapes also stand out in the artistic production of Arnaldo Pomodoro, famous for his bronze spheres realized between the ’60s and the ’90s.

“Sfera con Sfera” (Sphere with Sphere) is a series of sculptures realized by the sculptor Arnaldo Pomodoro, representing a huge metal sphere with a cracking surface which reveals a tangled world with another cracked sphere inside. 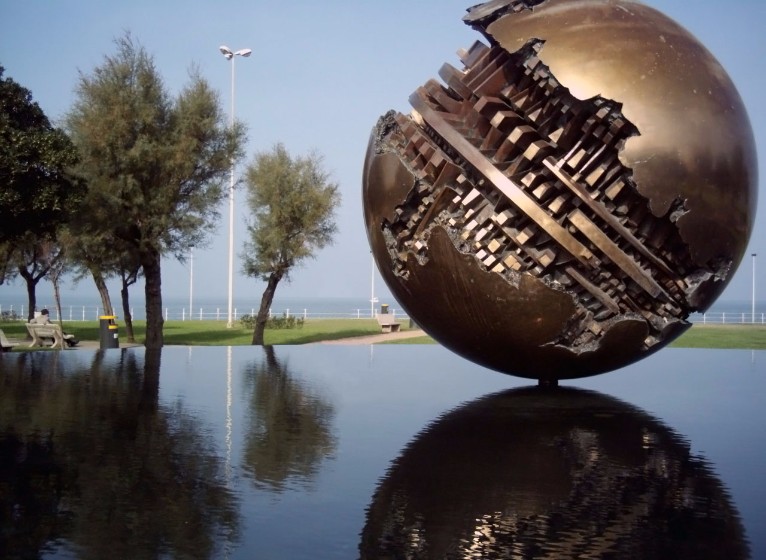 “This is what moves me to realize spheres: breaking such perfect and magical shapes to discover their inner fermentations, mysterious and alive, horrible and pure. At the same time, I free myself from an absolute shape. I destroy it, but I increase it, too. In this way the work has it best continuity: it is not just a reply to consumption, but rather to the need of discovering that is inside all of us and that in all of us in unsatisfied by industrial mechanicalness”. (Arnaldo Pomodoro)

Does it make any sense talking about spherical spaces and domes nowadays? The projects by RPBW, ShigeruBan, Jean Nouvel

La Bolla developed by RPBW - Renzo Piano Building Workshop in Genua in 2001 is a transparent dome made of glass with a diameter of 16 meters, which represents a kind of tropical garden with different species of selten ferns, where butterflies and other insects live. 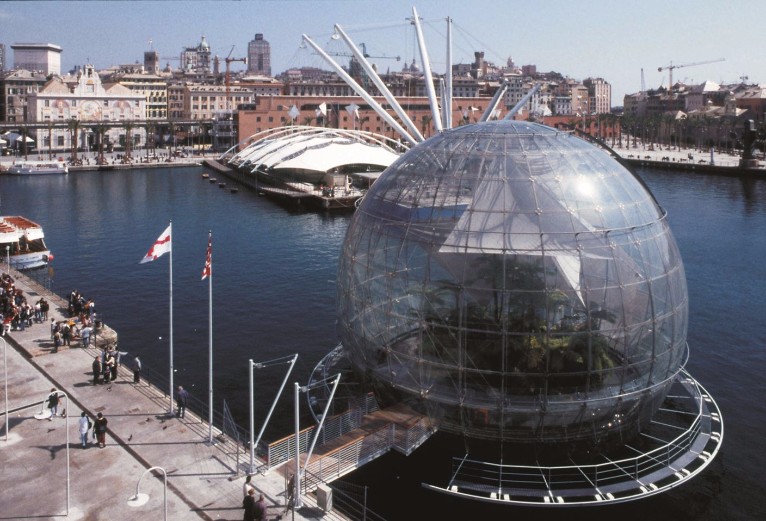 The latest project realized by the RPBW studio is always sphere-shaped, too. It is The Academy Museum of Motion Pictures in Los Angeles, which by 2019 will become the greatest museum dedicated to the story of cinema in the world. 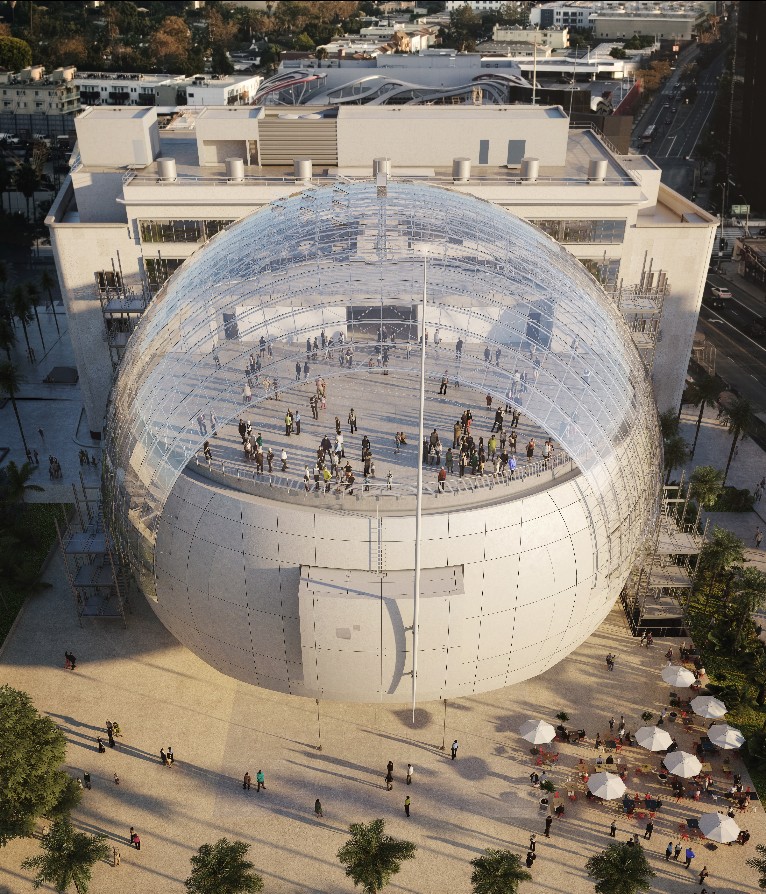 Well-proportioned curves also characterize the Cité musicale de l'île Seguin realized by Shigeru Ban Architects in Paris. Concrete, glass and even rolls of cardboard for this structure which will beat to the music, overlapped by a sail moving towards the sun, thus creating an interesting set of shadows on its large windows. 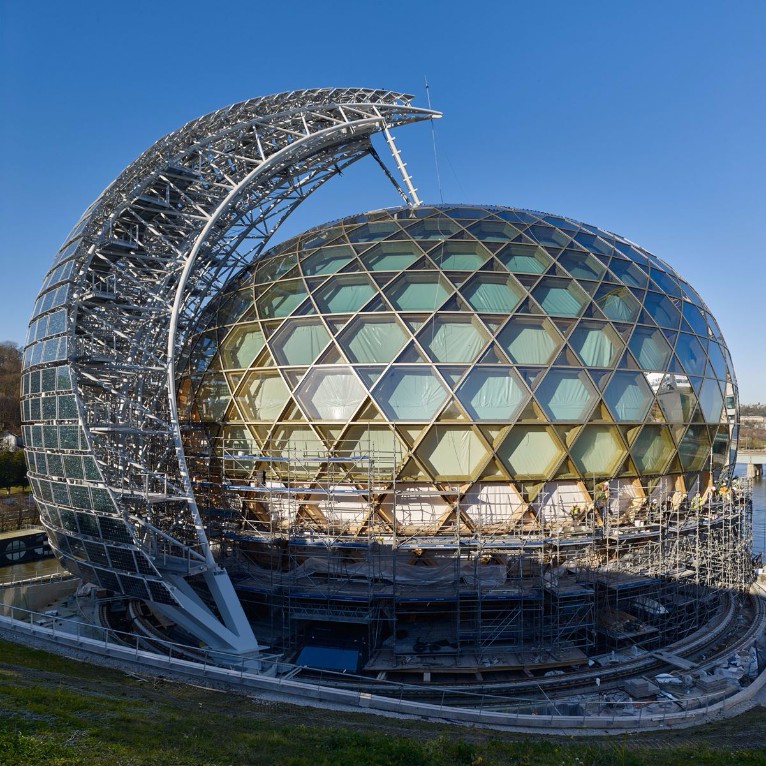 The geometry of the Louvre Abu Dhabi by Ateliers Jean Nouvel, which will open on November 11th, 2017, is also an homage to the Arabian city and its poetry. 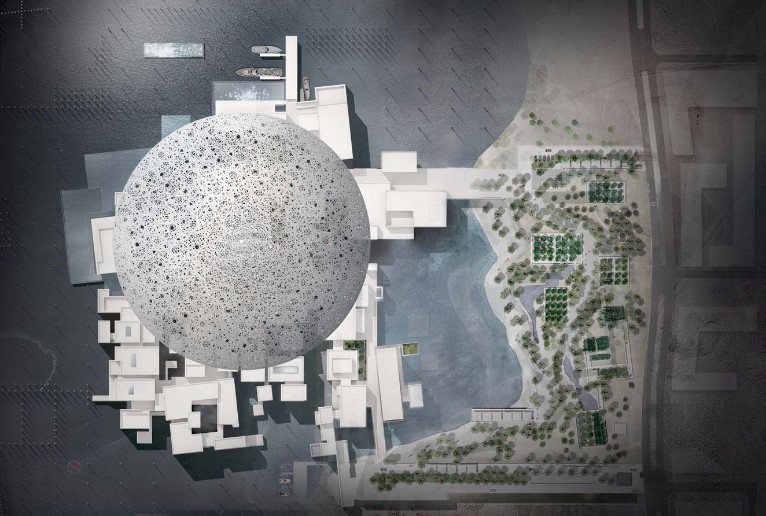 Visitors can walk through the promenades overlooking the sea under the 180-meter dome, made up of almost 8,000 single metal stars set in a complex geometric design. 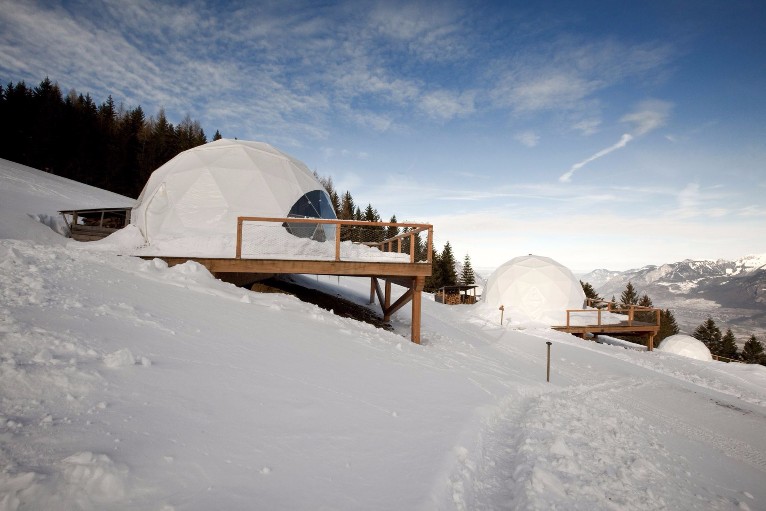 And that’s not all: the spherical shape fits for projects dedicated to environmentally sustainable tourism. It is the case of the WhitePod Alpine Ski Resort in Switzerland, a village made up of eco-friendly and snowproof rooms immersed in nature and with an igloo-shaped geodesic structure. 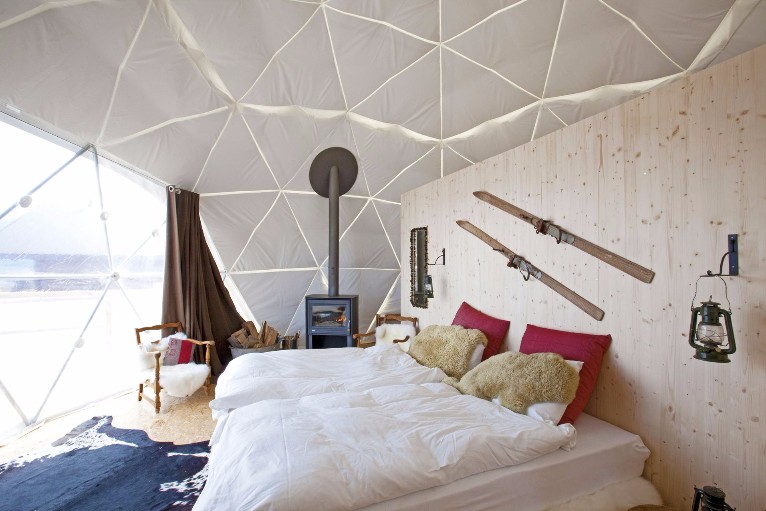