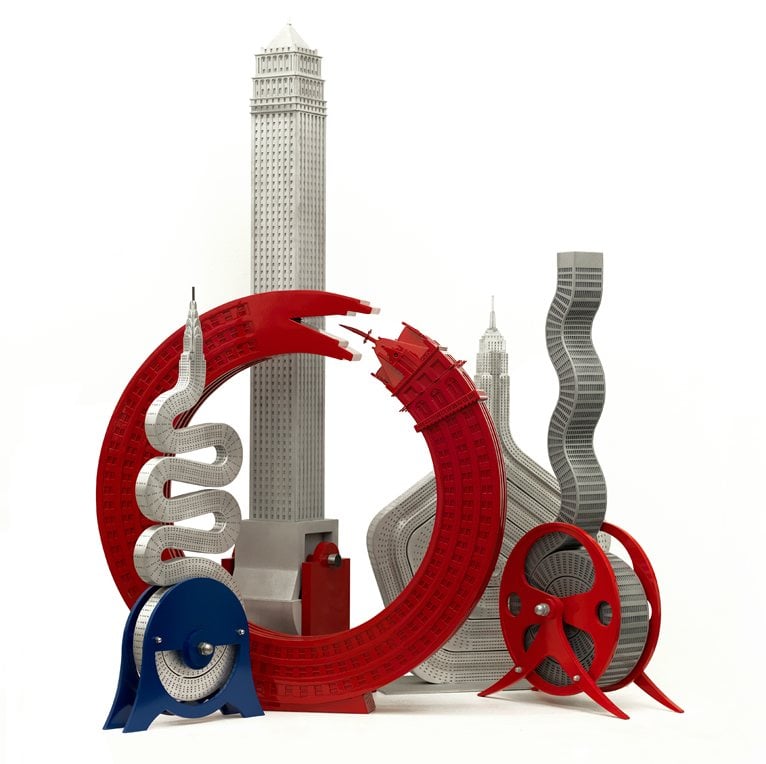 Magnan Metz Gallery, in conjunction with New York City’s Department of Parks & Recreation, and The Fund for the Park Avenue Sculpture Committee, has announced Alexandre Arrechea’s No Limits, a new site-specific installation to emerge along Park Avenue, March 1 through June 9, 2013.

Playing on the idea of elastic architecture as a metaphor for the challenges and opportunities of shifting conditions and new realities, No Limits will present 10 massive sculptures embodying New York’s most prominent buildings.

The sculptures, which will appear to roll, wind, and spin their way down Park Avenue from 54th to 67th Street, will reach towering heights of up to 20 feet.
Throughout his work, artist Alexandre Arrechea uses sculpture, watercolor and video to ponder the idea of destabilizing traditional concepts held about icons and their function in society. 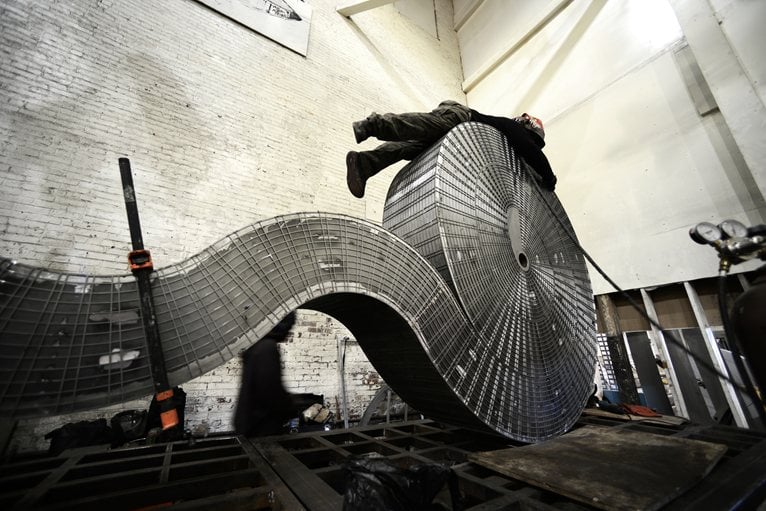 Seagram in production, 2013; Top:Maquettes of large-scale sculptures to premiere as part of Alexandre Arrechea's "No Limits" installation on Park Avenue

The art is meant to create a dialogue with the public that raises questions of control, power, surveillance and one’s role within these categories.
Through iconic architectural buildings and urban spaces, Arrechea plays and entices the viewer to explore this concept.
Taking the adaptation of architecture one step further, Arrechea created a series– After the Monument – in 2010 which featured rolled-­up stainless steel skyscrapers which serves as the impetus for the No Limits series specific to Park Avenue.

In each, Arrechea reshapes the concept of verticality and monumentality into a new reality: elastic architecture, or city. Sculptures maintain the façade and recognizable features of the iconic buildings, but also adopt new forms – an elasticity that is foreign to the structure. This concept serves as a metaphor to the challenges of adapting to new realities we face every day as individuals and society.
The buildings are transformed into a tool, or snail-like shapes as if one could reel these rigid structures in like a hose – expanding and contracting with the rise and fall of the economy and the sociocultural and sociopolitical shifts that occur with economic changes. 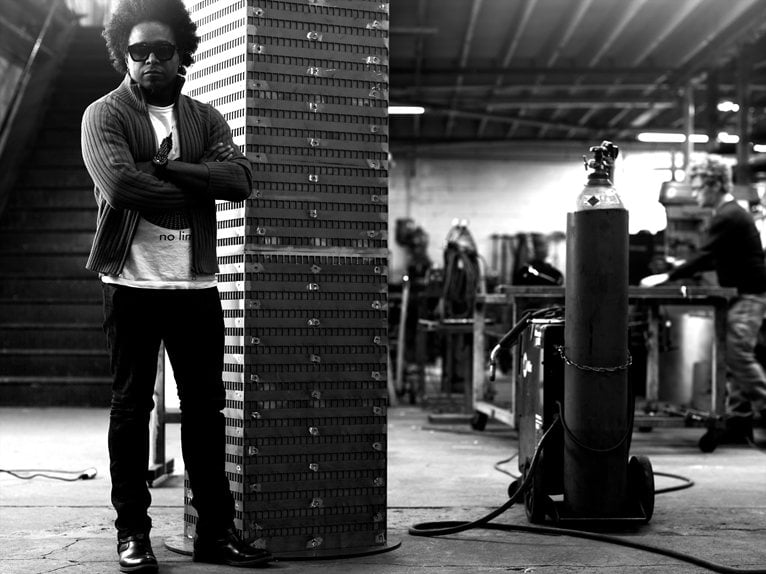 Alexandre Arrechea with Citigroup in production, 2013

“I believe the sameway that a building is exposed to daily elements and changes –cold, heat, rain, fog – it is also exposed to constant changes in function – increases and decreases in market value, tenant use, and therefore purpose and social value. These persistent modifications are something I want to capture and embody in my work, creating a new model in constant negotiation with its surroundings,” states Alexandre Arrechea.

In the Park Avenue series, Arrechea also fuses the familiar structure of architectural landmarks to the bodies of spinning tops, or trompos (toy tops popular in Latin America) as another form of elasticity.
The result is a “dancing city” or building in perpetual motion that can continuously spin, wind down, fall, or rise again. 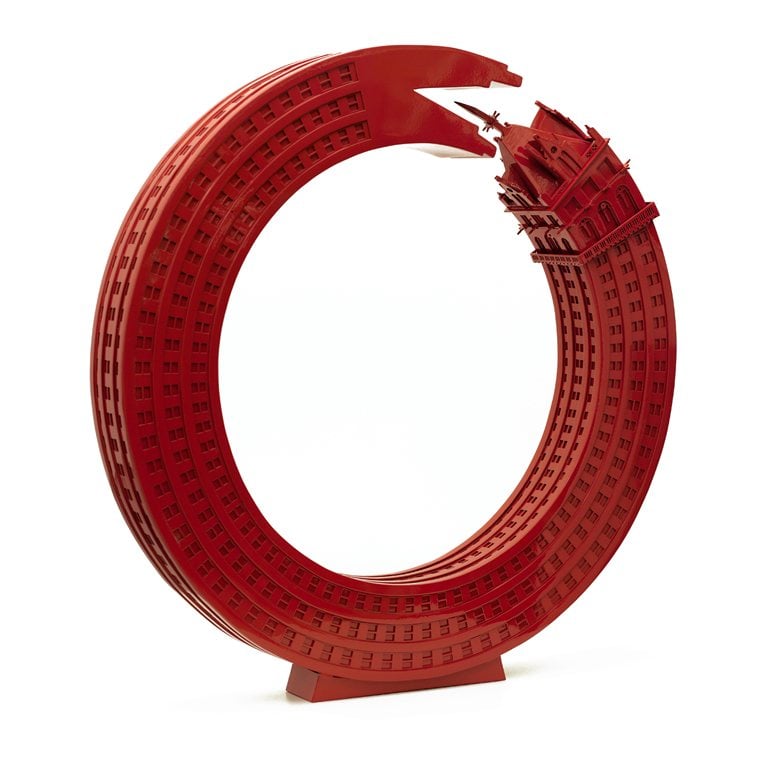 "These elements, I believe, symbolically parallel facets of the human condition. With this installation, I have created a set of works that confront dynamism vs. static, the whole vs. the fragmented, control vs. chaos, utopia vs.reality. The series provides a new point of access from which to understand the dialog between art and architecture and how this relationship can evolve and open new doors,” further comments the artist. 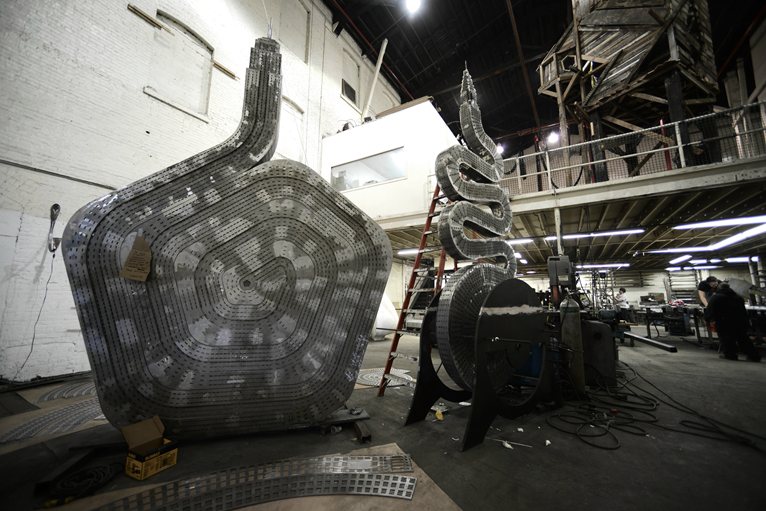 Empire State and Chrysler in production, 2013

Alexandre Arrechea (1970) graduated from the Instituto Superior de Arte (ISA) in Havana in 1994. He was a founding member of the collective Los Carpinteros (1991-­2003). As a solo artist, Arrechea represented his homeland in the first ever Cuban Pavilion at the Venice Biennale (2011) as well as the 11th Havana Biennial (2012).