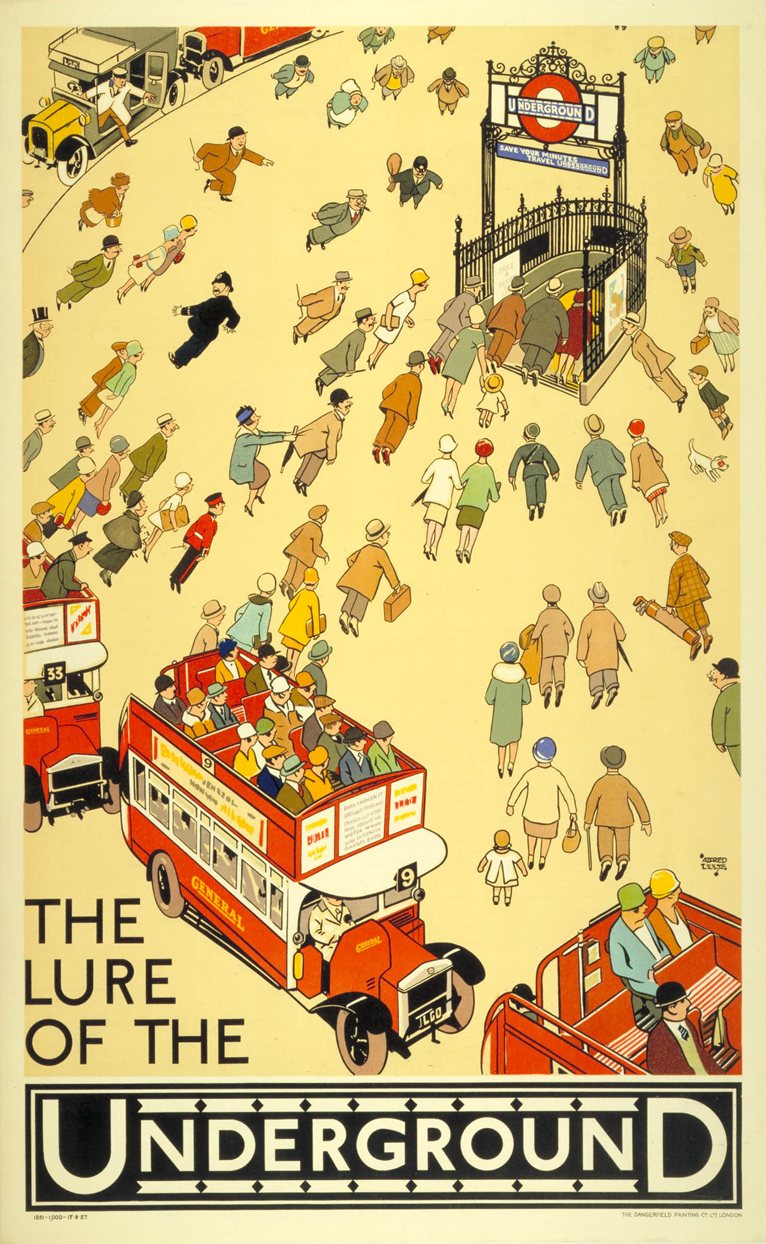 Since its first graphic poster commission in 1908, London Underground has developed a worldwide reputation for commissioning outstanding poster designs, becoming a pioneering patron of poster art - a legacy that continues today. Our new blockbuster exhibition Poster Art 150 – London Underground’s Greatest Designs, will showcase 150 of the greatest Underground posters ever produced. 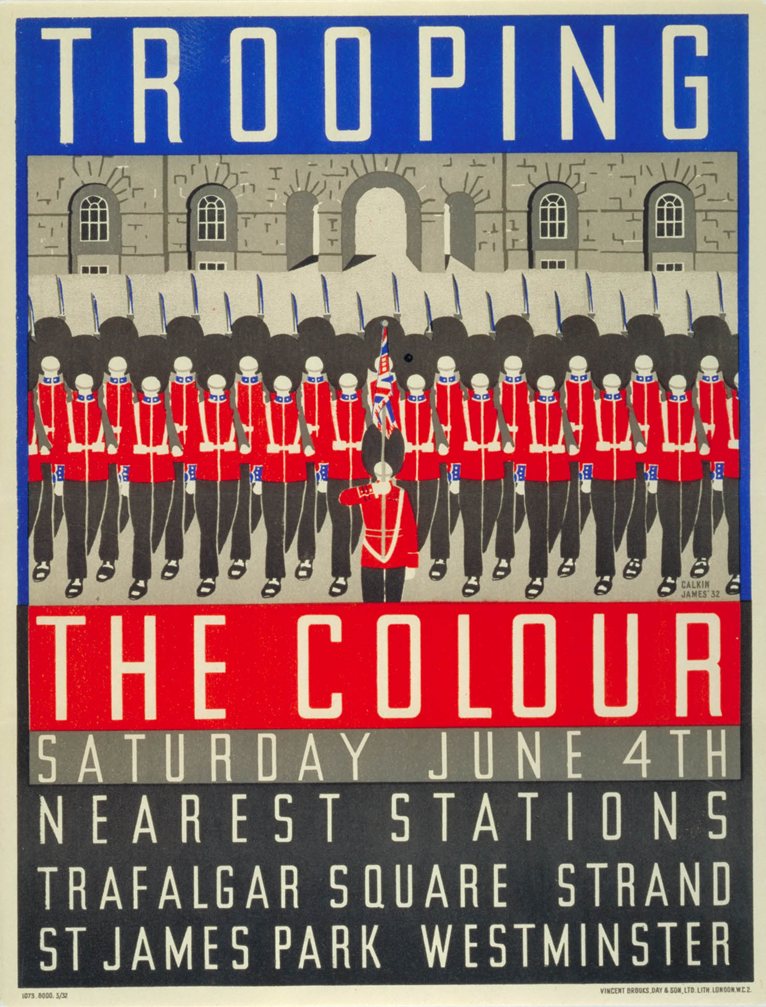 Trooping the Colour, by Margaret Calkin James, 1932; Top: The lure of the Underground, by Alfred Leete, 1927

Forming part of the 150th anniversary celebrations of the London Underground, the exhibition runs until 23 October 2013 and features posters by many famous artists including Edward McKnight Kauffer and Paul Nash, and designs from each decade over the last 100 years. The posters were selected from the Museum’s archive of over 3,300 Underground posters by a panel of experts; the 150 that will appear in the exhibition show the range and depth of the Museum’s collection. 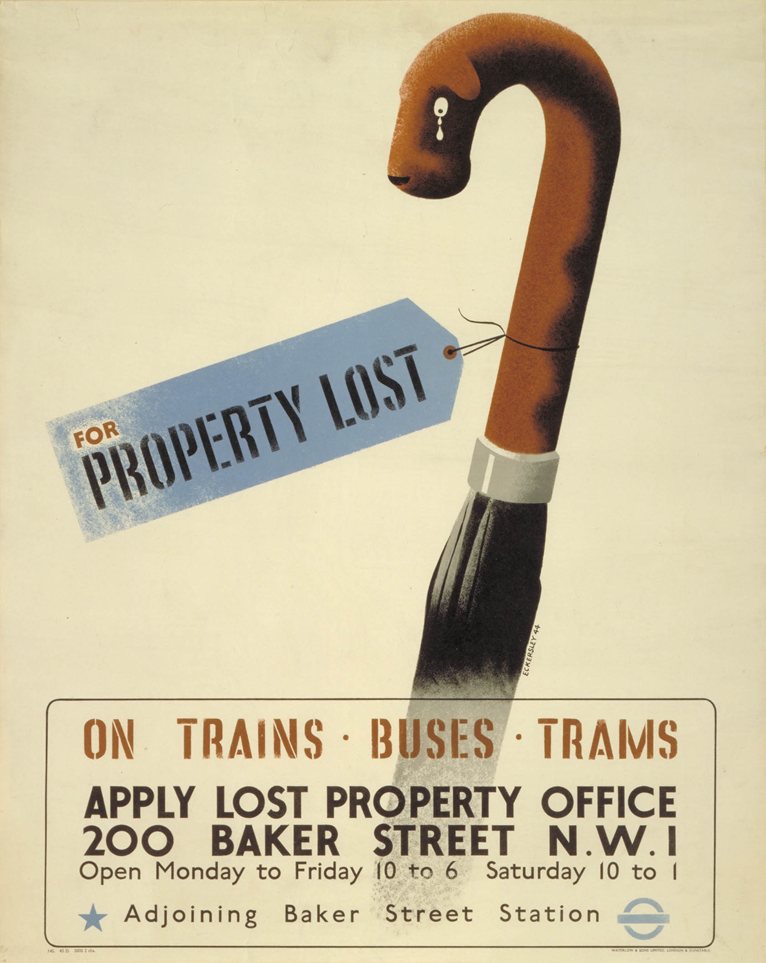 For property lost, by Tom Eckersley, 1945

Poster Art 150 is a fitting exhibition to commemorate the 150th anniversary of the world’s first underground railway, as the last major Underground poster retrospective was held in 1963 to celebrate the centenary of the Underground. Well-known posters, including the surrealist photographer Man Ray’s ‘Keeps London Going’ pair, will feature alongside lesser-known gems. The exhibition will also offer a rare opportunity to view letter-press posters from the late nineteenth century. 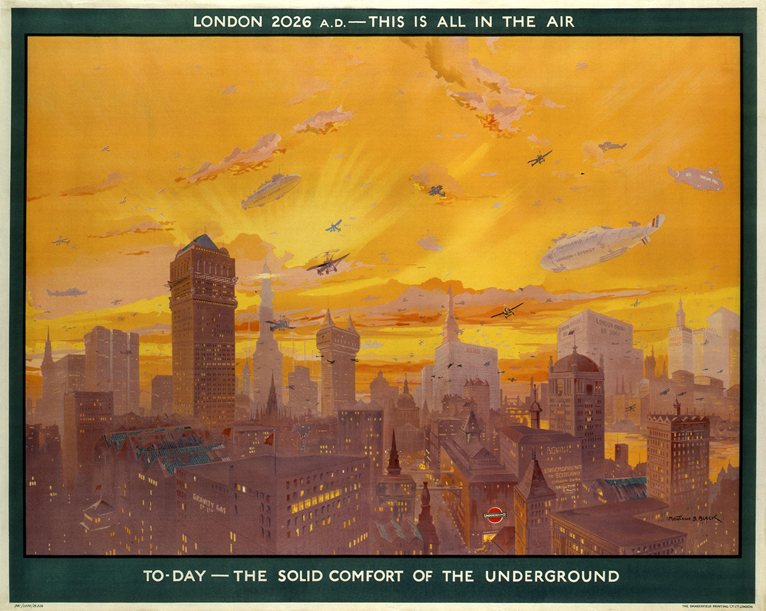 The exhibition focuses on six themes:

Finding your way includes Underground maps and etiquette posters. It also includes posters carrying messages to reassure passengers by showing them what the Underground is like.
Brightest London celebrates nights out and sporting events, showing the brightest side of London.
Capital culture is about cultural encounters, be these at the zoo or galleries and museums.
Away from it all looks at the way London Underground used posters to encourage people to escape, to the country, the suburbs and enjoy other leisure pursuits.
Keeps London going features posters about how the Underground has kept London on the move through its reliability, speed and improvements in technology.
Love your city shows the best of London’s landmarks as featured in Underground posters over the years. 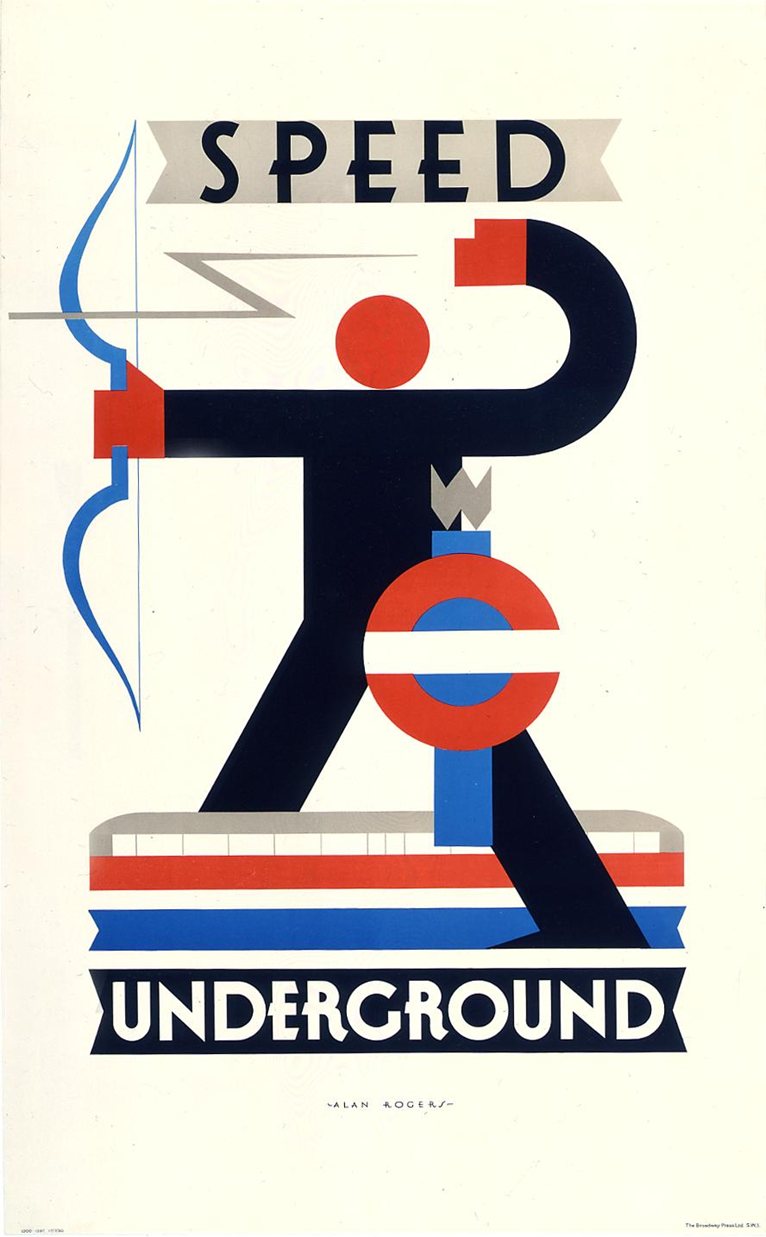 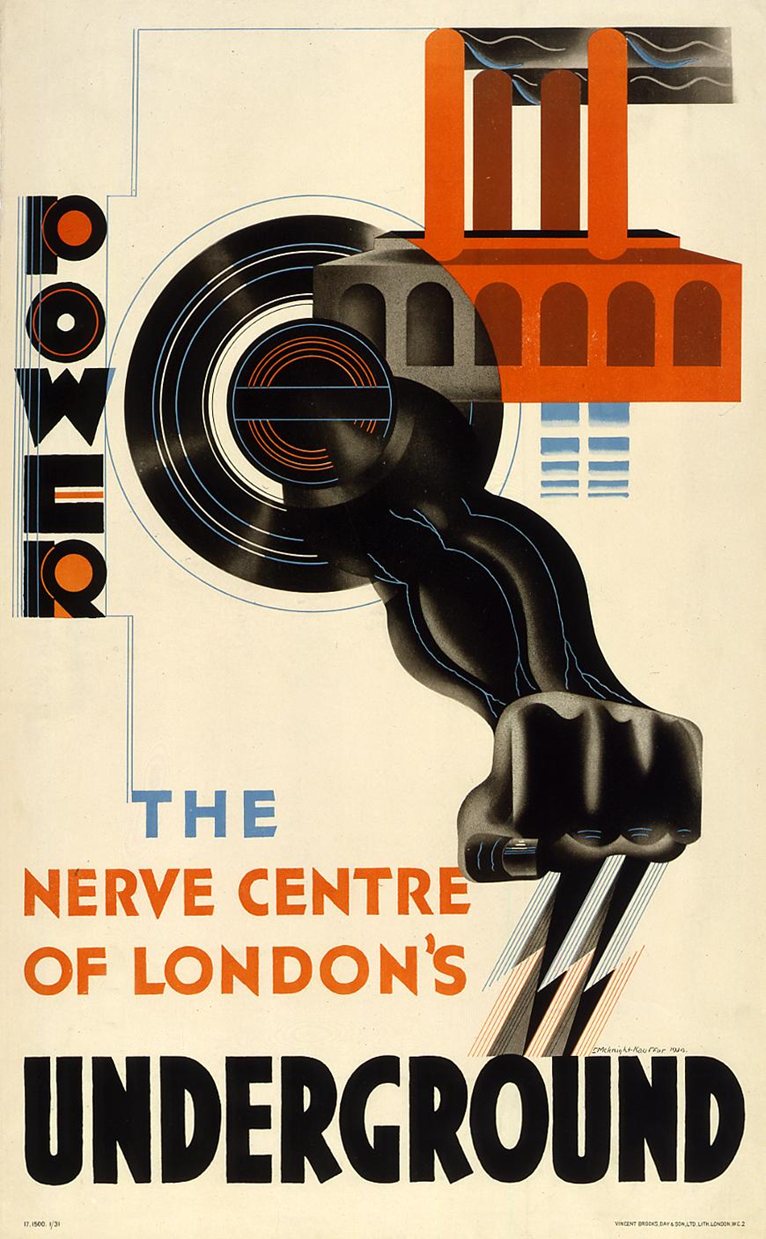 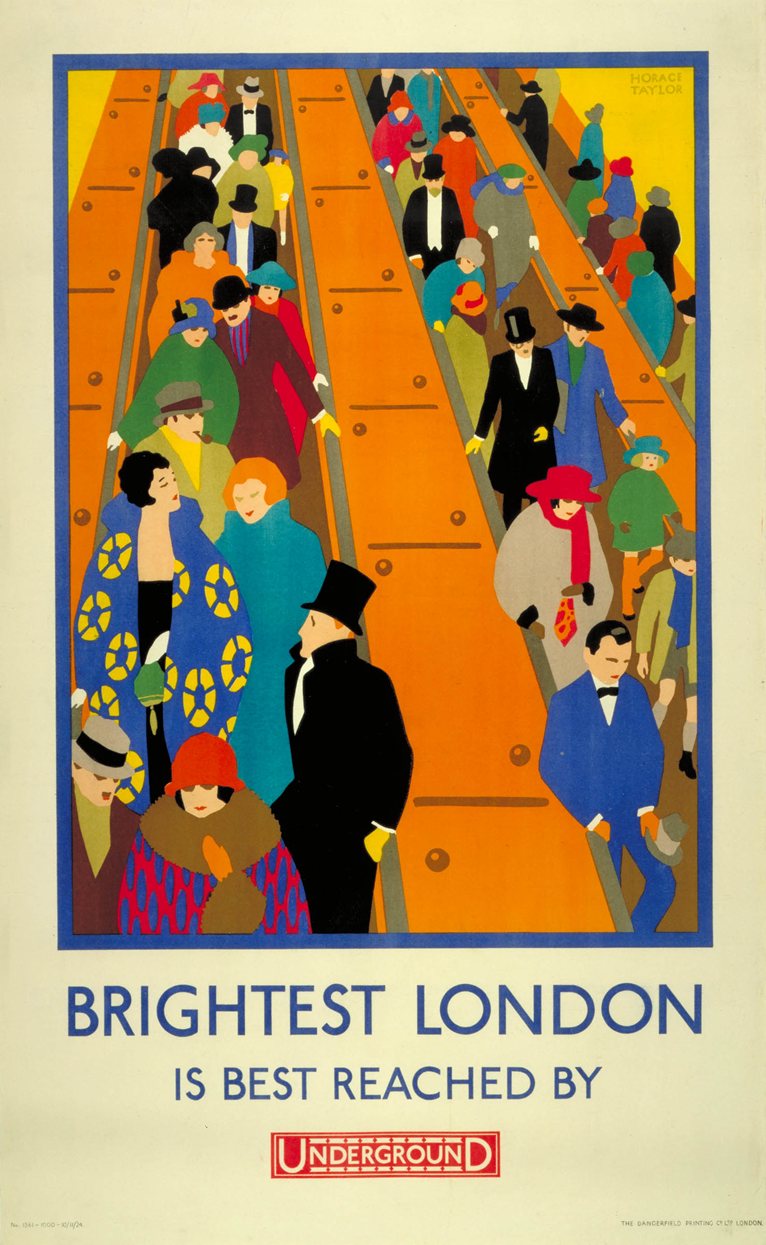 Brightest London is best reached by Underground, by Horace Taylor, 1924 (1)